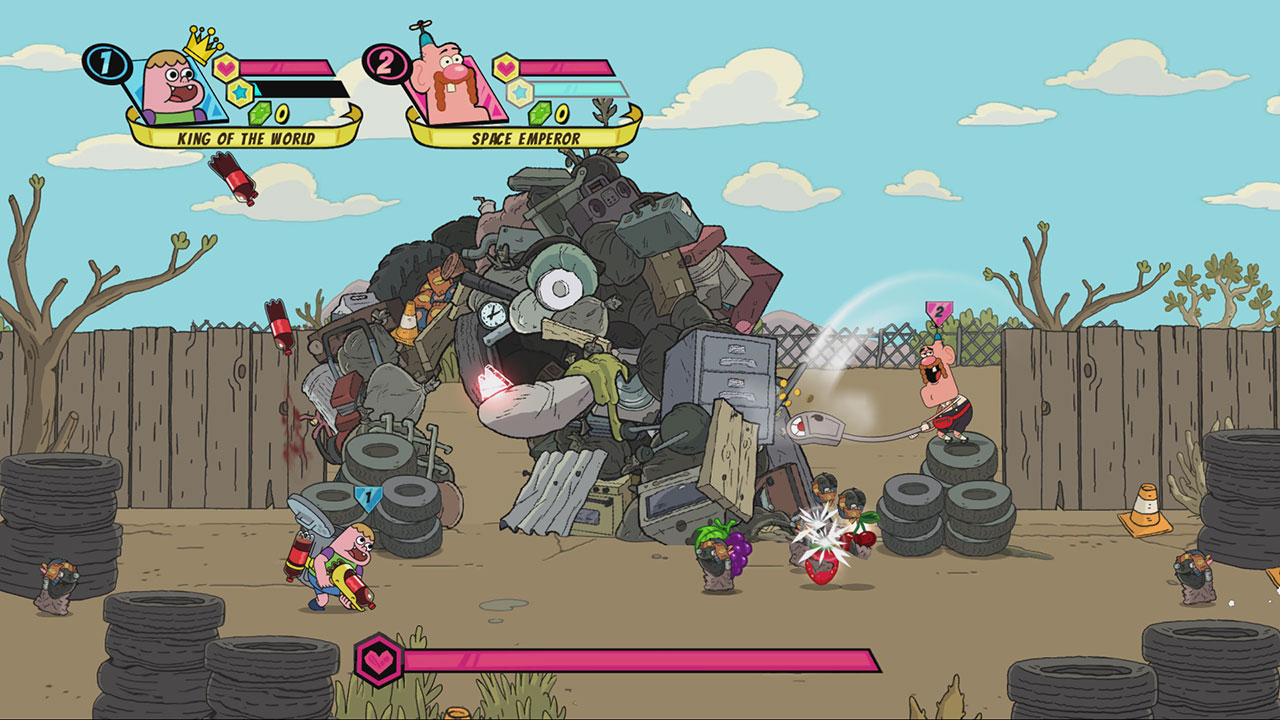 Cartoon Network: Battle Crashers is the latest installation from the Cartoon Network studio onto the Switch, and it comes hot on the heels of my review of Ben 10 just a short while ago. I voiced a few gripes in the Ben 10 game – lack of plot cohesion, overly simplistic difficulty – but overall it was a pretty good experience. As a result, I may have set the bar a bit higher when it came time to play Battle Crashers, which is, in my opinion, why it’s objectively worse.

Battle Crashers tells the tale of Uncle Grandpa, a character who’s apparently a bit popular, falling asleep in his mobile home while driving and someone changing the gears on his vehicle. Some mysterious crankshaft ninja, apparently. Anyways, Uncle Grandpa has a setting for “dimension busting” just below reverse and, as a result, plows through every conceivable modern Cartoon Network universe, collecting all the characters therein in the process. This isn’t a classic jaunt through time – Johnny Bravo and Dexter are nowhere to be found. Instead, you get Regular Show, Steven Universe, Gumball, Clarence, Uncle Grandpa and, of course, Finn and Jake from Adventure Time. Together, they set off across this weird new dimension to try and collect enough gems and get their heads on straight to make their way back home, however that might be. 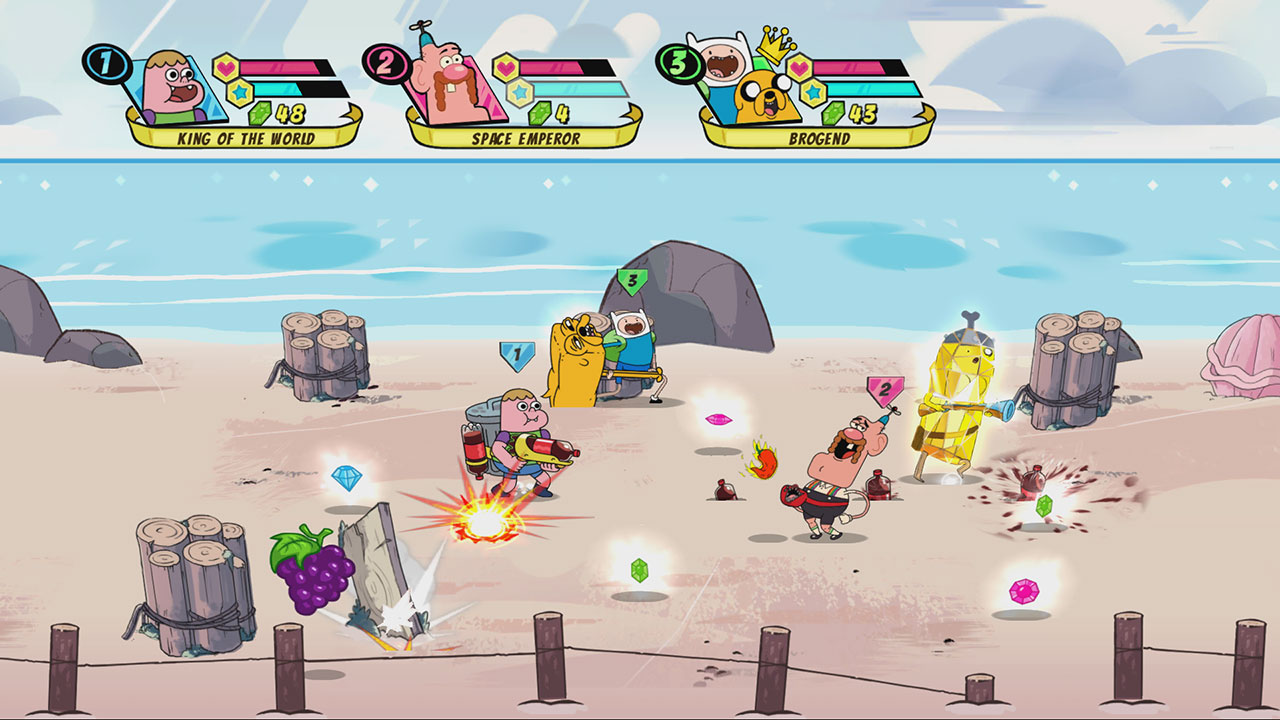 Battle Crashers plays out in a one to four player sidescrolling beat-em -up, but with weapons instead of punching. Each character has a basic attack, an ultimate attack that they can activate upon finding a mobile phone, and several extra attacks/transformations they unlock through leveling up. To be honest, it’s kind of a weird situation with the leveling up. Most of the characters I despise but understand their importance (mostly). So I switched to them when I needed to, but otherwise kept to the ones I was most happy with. Each character has different stats based around range, attack frequency and damage, and I kept defaulting to Finn simply because he hit the hardest. As a result, Finn collected most of the gems, which count as EXP, and he got to max out before anyone else, and, frankly, I couldn’t be bothered to swap to another character in order to level them up out of any sense of obligation.

You’re presented with several worlds, each with a handful of levels before culminating into a final boss fight. The levels are just as you would imagine them to be: sidescrolling quests with a bunch of breakable stuff (trash bags, boxes, etc) to get gems, and plenty of enemies who also drop gems when you beat them to death. They also drop healing fruit at an obscene rate, which, again, makes me think the developers are keen on keeping their core audience happy and not exactly challenging them. Still, there’s plenty of peril to be had between toxic gas, enemies with ranged weapons and the occasional massive boss. I think I was just hoping, after Ben 10’s comparatively interesting combat, that I would feel the same about Battle Crashers. And, in case you’re wondering why I keep comparing the two games, not only do they have the same publisher, but the same developing house as well. 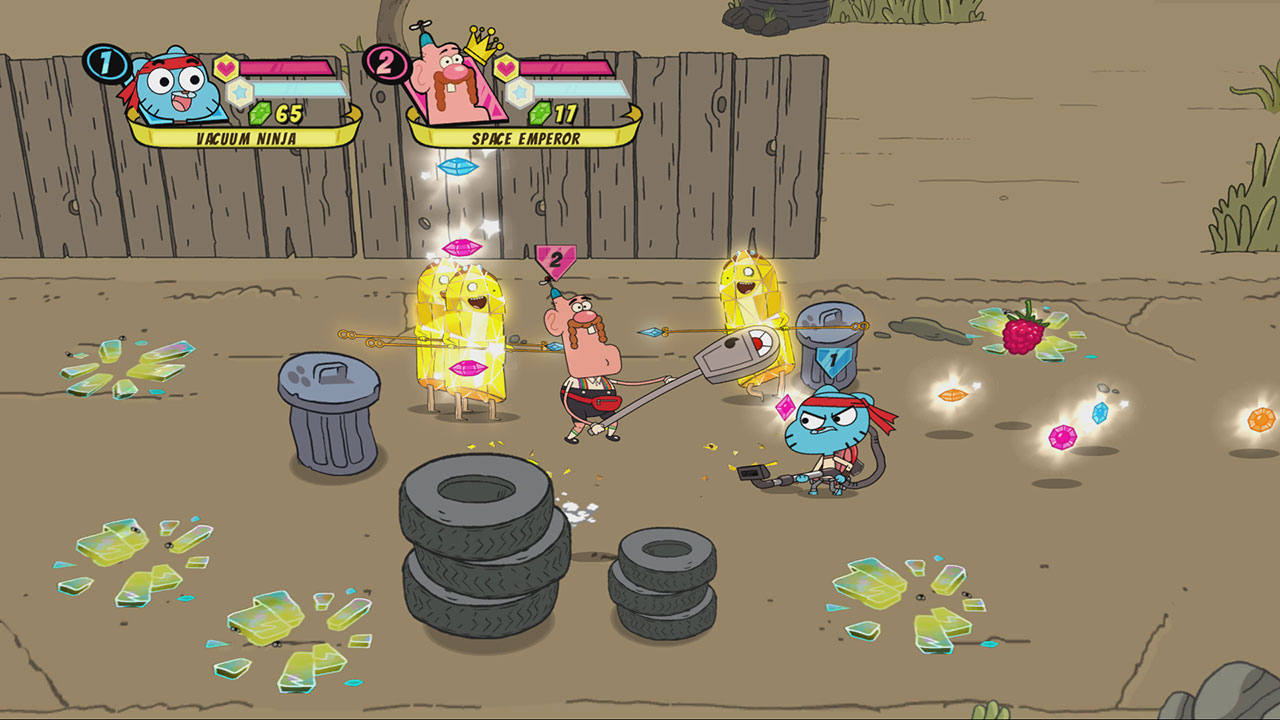 The music is forgettable, the voice work is significantly less intrical than Ben 10 and the action is really, really boring if you’re playing by yourself. Battle Crashers has a double edged approach to things: if you do single player, you get more time playing but also just feel bored constantly under assault. If you do multiple players, it’s more fun and chaotic but also the levels pass extremely fast. I’m not exaggerating that a team of four could probably finish the whole game in under four hours. Of course, there’s incentive to start over again and play with a whole different team, but that’s now under the pressure of the player to dictate their own interest in replay value. I think Battle Crashers wanted to try and emulate the experience of games like X-Men or TMNT: The Arcade Game, great arcade experiences that took several players and could be finished relatively fast. And, if you’re a fan of the Cartoon Network brand, I think that it could easily be of that caliber for you.

It’s not the fault of Cartoon Network that I’m mostly out of touch with the current show lineup, but you must admit that it ruins some of the impact the game should have had. I’m now realizing that, had the X-Men game just been a generic group of fighting mannequins, I probably would have hated it. Instead, all the characters that I adored from comics were there, fighting a bunch of recognizable bad guys while I merrily fed quarters into the biggest arcade cabinet I’d ever seen. So I think it’s fair to say that, if you’re someone who enjoys what’s currently on Cartoon Network (that isn’t Adult Swim or anime), then this could be a lot of fun. It’s mindless, sure, but it delivers on what it promises: a crashing battle. Parents looking to grab a quick and easy title for their elementary school aged child will find a decent gift here, so get out the wallets and breathe a sigh of relief: all the characters here can be unlocked for free and with just a few minutes of play.