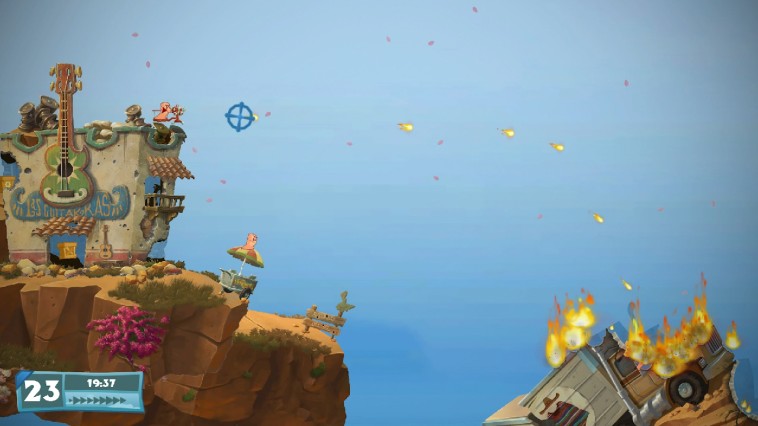 Long ago, there was a simple and elegant game made by Team17 that went by the oddly short name Worms. The purpose of this game was to guide a team of worms to victory against a second team, and you did so with the most ridiculous sort of firepower available. There were bazookas, exploding sheep, flaming punches and all sorts of gimmicky items to make the game both strategic and fun. It just kept getting better and better, and many people argue that Worms: Armageddon was the best one ever created. Then Team17 made a bunch of weird variants, like Golf and this peculiar 3D version, and I quickly lost interest and never wanted to play again. But Team17 said they got back to their roots, and here we are, on the Nintendo Switch, ready to try some Worms W.M.D.

Worms W.M.D. follows, at the core, the simple goal of every worms game, which is knowing angles and timing to obliterate the other team in the most overkill way possible. In fact, I have to acknowledge that even Team17 is kowtowing to fans of the classics by making W.M.D. the spiritual successor to Armageddon, stripping away a lot of the unnecessary flair and extra mechanics (bye bye water physics) and focusing on what made the game great in the first place. Now, it should be noted this isn’t a total return to form: if that were the case, why the hell would anyone buy this when Armageddon is a decade old and can be found in most software bins for pennies? Instead, what you end up with is a big hunk of old, a dash of new, some really bizarre changes that I don’t entirely hate, and an overall successful package that should lure back in longtime fans who took off the moment they saw they had to assign classes to the worms.

Some new things to keep in mind: vehicles, buildings and mounted artillery. Vehicles are exactly what they sound like, and they function similar to the tanks that you can enter in Metal Slug. Sure, you get this hunk of iron that can take a few hits and has big weapons, but it also has a whole tank of fuel and will definitely go up like a Roman candle if you’re not careful. I like the idea of the vehicle, and understand it’s the only way to pull off a crossover with Rocket League (more on that in a moment). It does create some interesting moments of strategy, but, for the most part, veteran players will want to steer clear (heh) of jumping into anything with four wheels unless you know your team has your back. Otherwise you just become a homing beacon for players to unload everything they can on your stinking carcass and, boom, you’re the first one out. 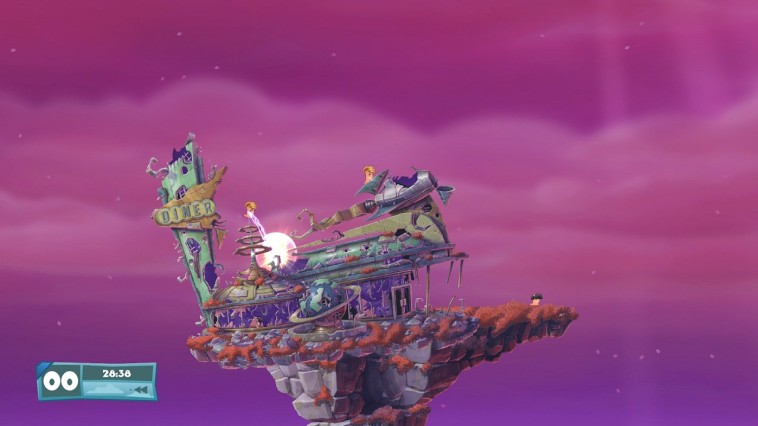 Buildings and mounted artillery both go in the “oh, that’s interesting” category for what they bring to the strategy table. Being able to enter buildings and duck up in the rafters can give a bit of an advantage in terms of staying alive, since, even though other players can watch you go in, you tend to be forgotten about unless you’re actively being pursuited. When you are down to the last couple of worms, being able to have a shootout inside a very flammable building gives a whole John Woo effect to things, and I deeply enjoyed that. In the same cinematic vein, mounted artillery puts you in Rambo’s shoes as he gets ready to gun down wave after wave of enemy soldiers while screaming above the fire. Only most, if not all, enemies have the good sense not to stand in one place for very long during their turn, so it sometimes takes a brain-dead miracle for everyone to line up and you to really get your execution on. Having said that, it’s still fun, and you’ll see players both local and online scramble to be the first to the top of the mountain so they can have their fun playing ultimate assassin.

Team17 also did the new developer thing where they reached out to all their friends in the industry to see if they could bring along some swag from other games, and the result is pretty fun. Most of the stuff is just silly aesthetics: Goat Simulator Masks, Payday2 hoods, but some of it is legit, crazy, game-changing stuff. The dubstep gun, made famous in Saints Row IV, is a perfect addition to an arsenal where a Monty Python joke has been the most recognized weapon for decades. The Liberty Strike from Broforce is the perfect airstrike to give a bit more fire to the game and also to remind everyone that the greatest weapon of all is FREEDOM. And almost all of these DLC additions are a.) free to Worms W.M.D. owners, b.) add extra missions for fun and c.) bring franchises to the Switch that either have not or will not ever come over. Let’s be honest, it’ll be a damn miracle for Saints Row IV to arrive (but Yooka-Laylee isn’t far off).

The AI for most of the campaign and challenge missions is par-for-the-course: the longer you play, the more serious the encounters will be and the harder you’ll find strategizing against a computer player who knows their own inventory a bit better than you, as well as the terrain. But I also encourage players to only do the single player missions when there is literally no other way to play against other people. Worms W.M.D. is generous in online play, with random matches being paired out relatively fast, but there are so many ways to do couch and near-couch play that I can’t imagine not finding someone to join in. Being able to easily pass along the JoyCon for turn after turn of watching your brother frustratedly hurl grenades into the ocean can’t be matched if he’s on the other side of the world. 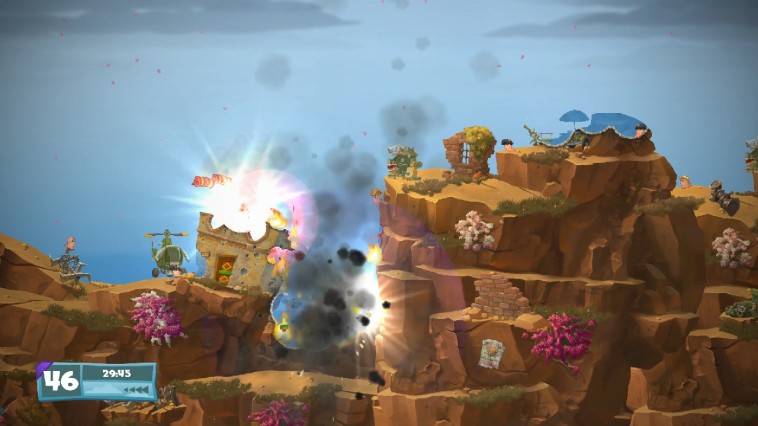 Not everything is roses and sunshine, but the shortcomings of Worms W.M.D. are pretty paltry in comparison to the good things that’ve come about. The crafting system, for one, feels very forced in terms of gameplay. For the missions where it exists, I sort of understand the feel of it all, but it just comes across like bandwagoning on the latest trend in terms of game mechanics that everyone and their mother puts into a title. I’m missing some of my favorite voice packs, but stripping those out in favor of actually having gameplay worth investing in was probably a good tradeoff. And I still am not always able to find a match at 3PM in the afternoon, but this is a relatively newer title, and I gotta wait for everyone to let their guard down so that they can let Worms back into their hearts. It’s easy for a game reviewer to say “This game is amazing!” but your average player will be rightfully cautious. C’mon guys, it’s all good, jump back in the pool.

And, at the end of the day, that’s what I can honestly say to folk who are even remotely on the fence. Without being too cliche or hyperbolic, Worms is back in a big way. I don’t expect Team17 to admit or brand any of their titles as mistakes, but this return to form is proper acknowledgment to what people have been asking for and serving what is most requested. If you had any fun with Worms in the past, specifically between 1999 and 2006, then this is the game for you. If you’re waiting for the next Golf sequel, who are you and how did you get into my house? As for me, I got a date with a bazooka and some conveniently spaced explosive barrels.