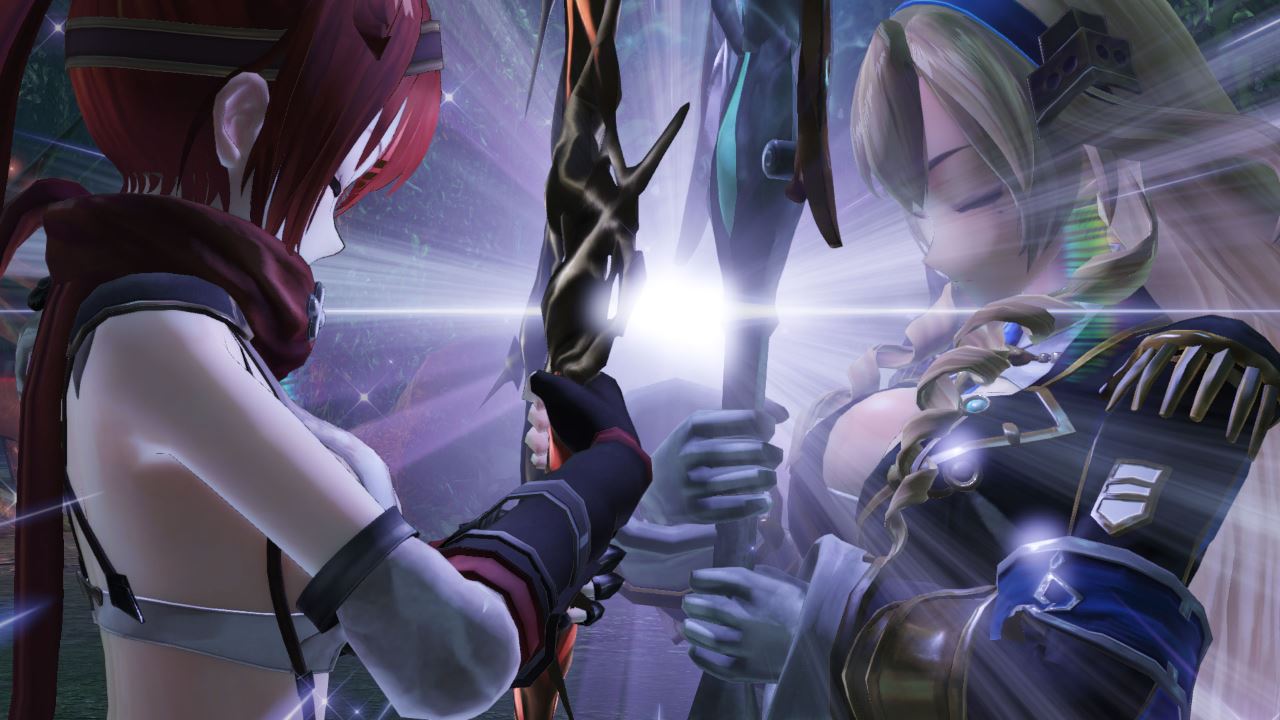 Some time ago, after playing the rather excellent Persona 5, I’ve decided to give other far-eastern titles a chance, as possibly there might be more to the Japanese scene than Metal Gear, Street Fighter, and Resident Evil. And in turn, week after week, I wold either review, or downright purchase a random Japanese title from the PlayStation Store. And while the vast majority of them, such as Zero Time Dilemma, were simply underwhelming, others were shambolic, bordering on tragic. And one of such games, is the ‘gothic’, action RPG, Nights of Azure 2: Bride of the New Moon. And the game itself, is just as weird as its title.

Nights of Azure 2: Bride of the New Moon, is an over the top action game, where you are flying across the screen at hundred kilometres per hour, while building up combos which at time can reach quadruple digits. And while the on-screen antics of the protagonist, are a sight to behold due to the numerous visual effects, and in-fight cutscenes, the overall feel of the in-game combat is leagues behind titles such as Devil May Cry 4, or Batman Arkham: Asylum.

All in-game battles play out at an insane pace, however, as mentioned before, they lack the crunch and a bite which can be found within other titles of the genre. In addition, the never-ending barrage of flashes, floating stars and hearts, has a tremendously negative impact on the title’s performance, as its framerate is constantly dropping. And while, such state of affairs would make sense within visually intensive titles such as Uncharted 4, it unfortunately does not, when it comes to Nights of Azure 2: Bride of the New Moon, as it the title at hand, at least on the visual level, is rather underwhelming. 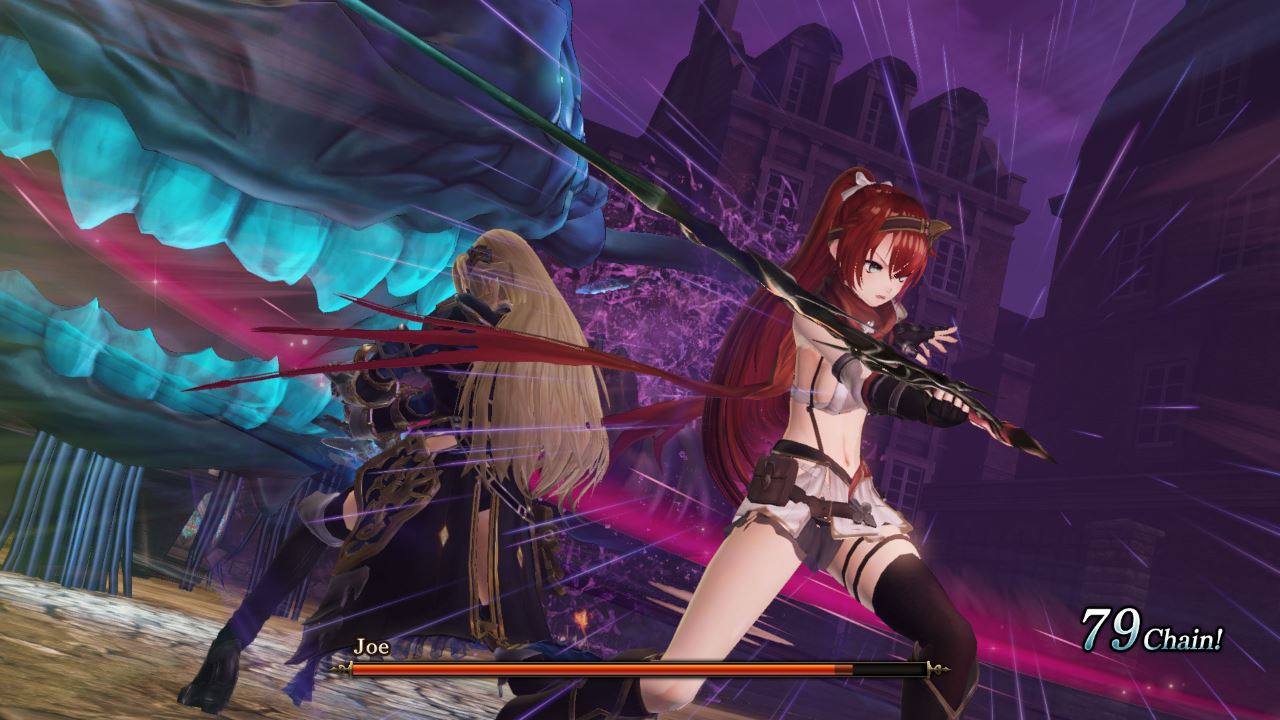 Nights of Azure 2: Bride of the New Moon is riddled with low-poly objects, simplistic and overstretched textures, and characters which have very little to no detail to them. And while playing it for the first time, I had to double check the initial release date of the title, as it looks just like PlayStation 3 game, and one which was released within the early days of the console’s existence. And while the underwhelming visuals are a rather significant issue, when it comes to Nights of Azure 2: Bride of the New Moon, it will not bother the connoisseur of the ‘’hentai’, as they are going to play this particular title for one thing, and one thing only.

Just like Dark Souls 3 is a niche title, for the quote-on-quote hardcore gamers, Nights of Azure 2: Bride of the New Moon is a niche game for the lovers of scantily clothed, visibly underage girls, with squeaky voices, and a large set of ‘’lungs’’. And Koei Tecmo, the developer of the title, knows that, as the so called ‘’hentais’’ are plastered all over the box, promotional materials, and are the main attraction of the game.

Nights of Azure 2: Bride of the New Moon, is not a kind of a title which you’d want to play in public, even if you have no shame. As even I, have played it at first with the headphones on, and later on with no sound at all, as the in-game dialogues –  which are entirely in Japanese – sound more like a cartoon for mature audiences, rather than a narrative-driven video game. And even if you are a ‘’fan’’ of this type of games, then you should probably opt in for the PlayStation 4 version of the game, as the Switch port, is likely to get you sectioned, if you ever play it in public. 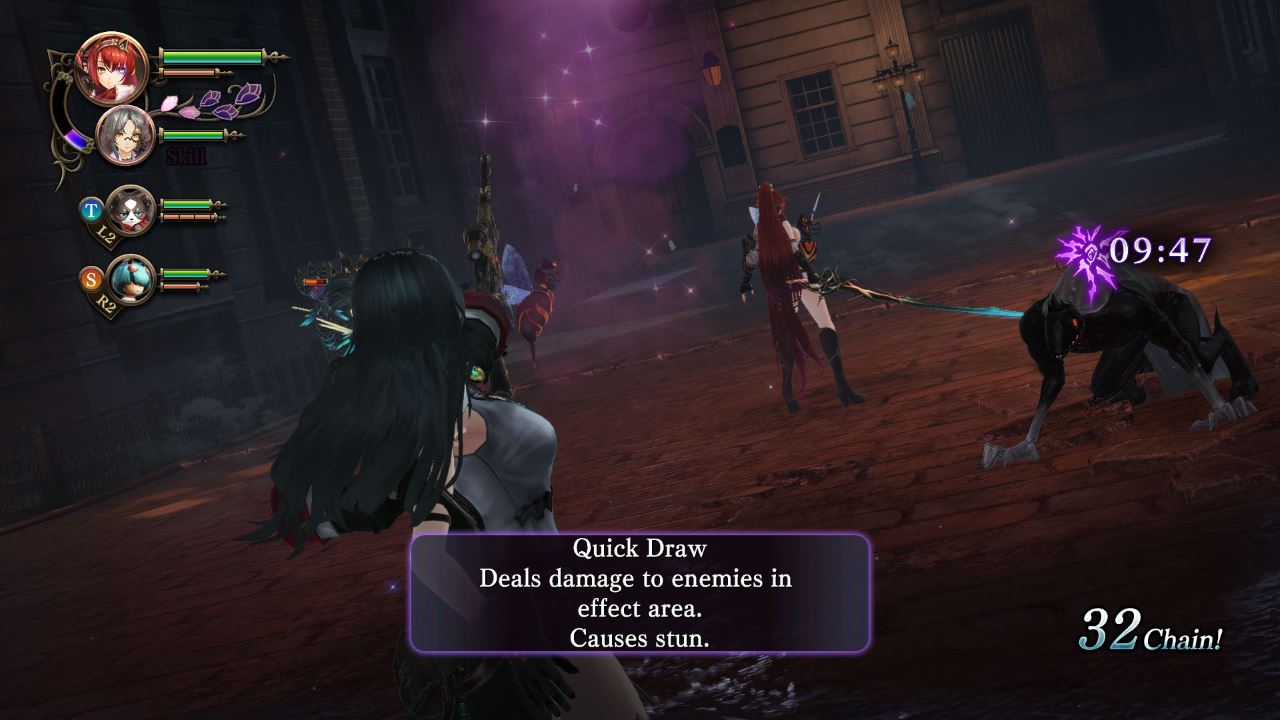 Besides teenage anime girls with big breasts, and some questionable cutscenes, which are simply there to over sexualise the already scandalous tone of the game, Nights of Azure 2: Bride of the New Moon has not much to offer. And while it refers to many modern features, and mechanics, it feels like a game pulled straight out of 2005. As all the in-game tutorials are nothing more than blocks of overlong, and monotone text, and all out-of-combat cutscenes, have to be manually moved forward as they don’t play automatically and require user’s input.

Nights of Azure 2: Bride of the New Moon despite of its archaic approach to game design, still feels relatively modern, mainly due to the in-game combat. However, despite of all its bells and whistles, it is still not an experience that would captivate western gamer for any prolonged period of time, even if he/she completely disregards the cringeworthy art style of the game. And that’s because most modern, western gamers, will simply not put up with a selective dialogue, as Nights of Azure 2: Bride of the New Moon, just like a large portion of Japanese titles, features selective voice over. Meaning that some conversations have audio feedback, whereas others are nothing more than a wall of text, which has to be read out manually. And while to most selective voiceover may signify the end of the world, to others it will be a gift of god, especially when it comes to games such as Nights of Azure 2: Bride of the New Moon, where all characters sound like squeaky dog toys.