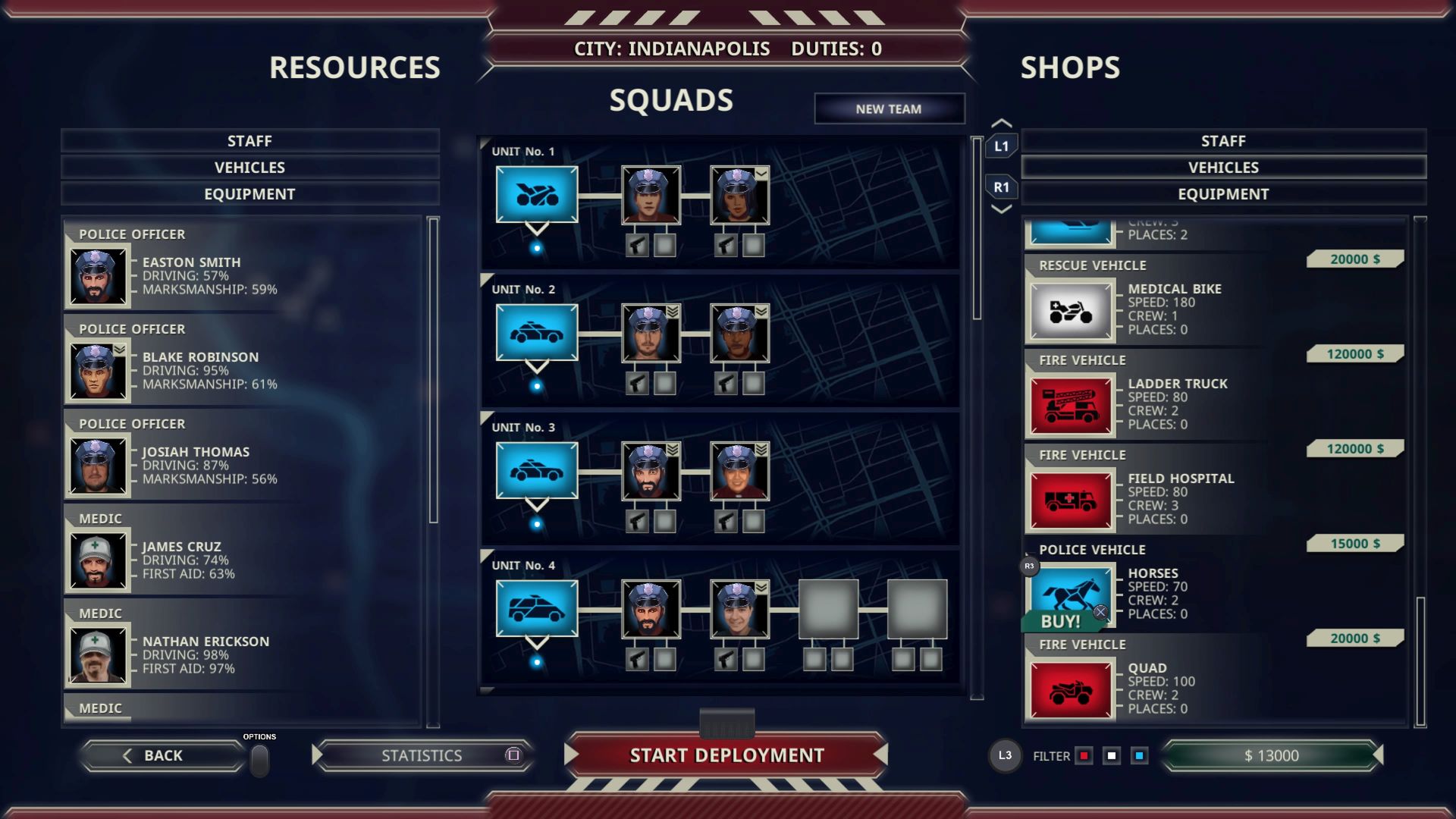 ‘Job Simulators’ are a prolific genre of game these days. Building on the tycoon ‘control it all’ style offerings of old, these games put the player in a more hands-on position to deal with the day-to-day tasks involved in the chosen line of work. 911 Operator is a game that does just that – the player controls an emergency services operation, not only taking 911 calls as the title suggests but also dispatching units, and investing finances in new personnel, equipment, and vehicles.

The gameplay is simple but effective. You see a map of a zone in your current city with police patrols, ambulances, and fire crews highlighted. As incidents arise, they are marked on the map as well and you choose how best to respond to them. If that sounds simple, it is deceptively so. This is a game that lulls you into a false sense of security, letting you think it is easy before putting your resource management skills to the test.

As a basic but effective tutorial (much like the game itself), you immediately take the plunge into manning the phones and managing the teams for a shift. A number of incidents, major and minor, will keep you busy and you need to respond to them in the best way to keep your reputation up and therefore keep your job.

You are notified of incidents in two ways – through calls, and also via notifications. The calls are the main focus of the game and are a highlight of the overall experience. The scripting and voice acting is superb (even if there are a few language errors in the written transcripts). The 911 operator always sounds professional and calm, and the members of the public phoning in vary from concerned passers-by to distraught witnesses and victims. Handling them in the right way to get the necessary information and, when necessary, keep them calm is one of the key aspects of your job. One of the first calls I received was from a woman wanting to order pizza. A few carefully selected probing replies later and it became clear that she was in danger and trying to get help without drawing attention to herself.

There are also calls that don’t require you to send help directly. In one instance, a woman called about a fat fryer burning in her kitchen. Following my advice, she was able to put the fire out with no major damage or injuries and no need for the fire department to race out to her house. Then, of course, come the prank calls. I spoke to a 7-year-old who wanted help with his maths homework, and also received a call from a game developer looking to research emergency call operations (a nice touch of self-depreciating humour from the developers there). These need to be handled in the right way as well, however. Taking the time to make the boy and his mother aware of the seriousness of tying up a 911 line avoids any loss of reputation as does directing the developer to the right department for enquiries. 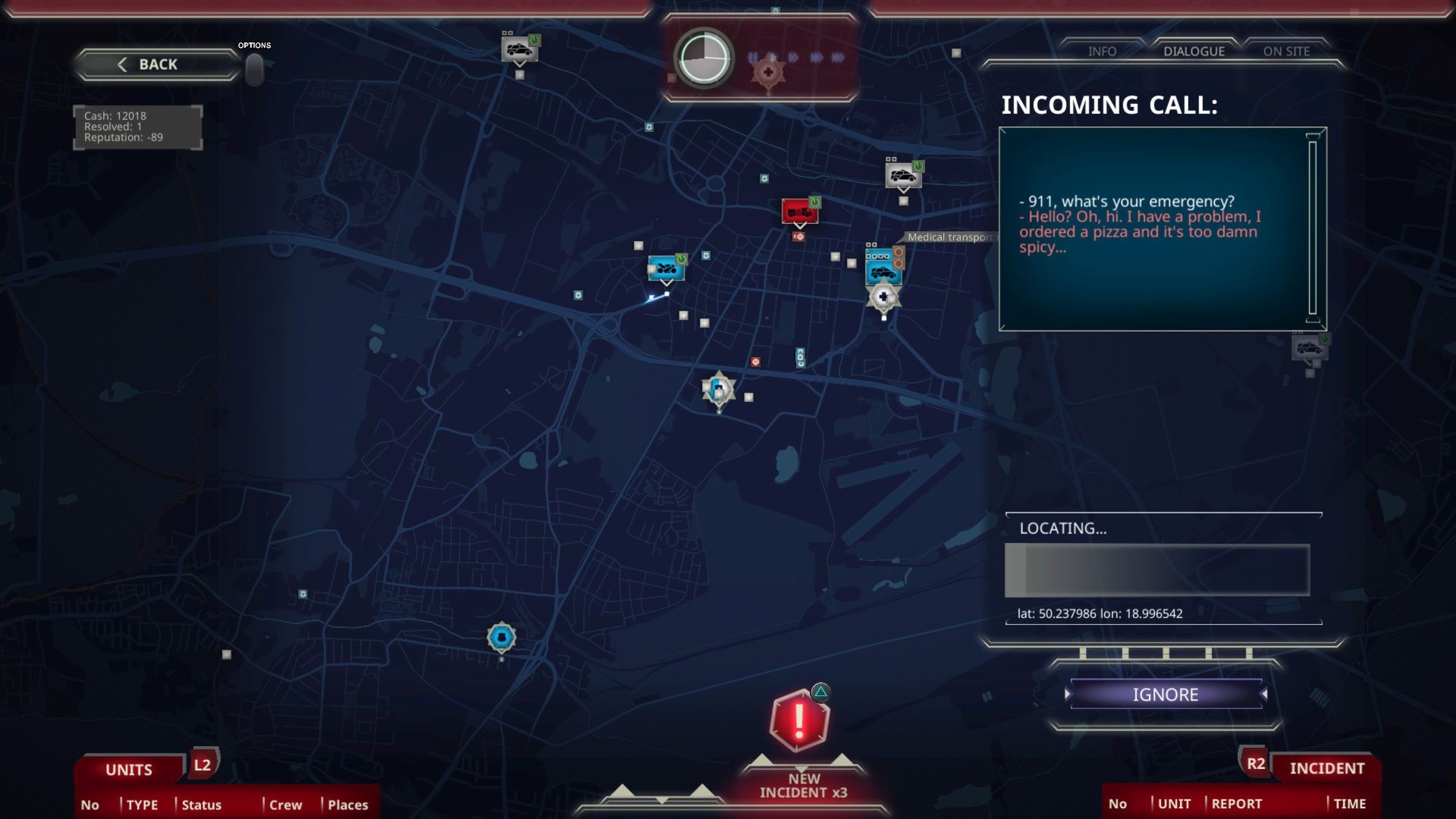 And, yes, you do get options to respond inappropriately – telling the caller to run into a burning building to check for anyone trapped inside for example, or instructing someone suffering from food poisoning to man up and get themselves to a doctor. This allows for some sadistic fun but will most likely result in you losing your job at the end of the shift!

The notifications add an extra layer of complexity as these pop up quite frequently, including while you are handling calls. These range from minor issues such as speeding to quite serious reports of gang fights. Often, these can require multiple teams such as police and ambulance services to deal with a traffic accident. You also have to keep an eye on each incident as the dispatched units try to handle them. Police may request back-up if they come under fire, or an ambulance may be needed if the responding officer finds people at the scene in need of medical attention.

This is where things get extra complicated. You will not always have the required units free when they are requested, and the officers will have to wait for assistance to arrive. This in turn ties up the police unit as they cannot leave the scene until the situation is resolved. This is when you realise that the game is not as simple as it seems after all, and you wish you had recruited some extra personnel or supplied extra equipment before the shift began.

After each successful shift, you will be sent to an overview screen where you can manage your teams. You can recruit new people to make teams bigger or add new response units. To do that, you will need vehicles of course with options ranging from police bicycles all the way up to rapid response helicopters. You also get the option to buy specialist equipment such as on-board dispatch computers for faster response time, first aid kits, and fire extinguishers. These allow your teams to respond and resolve issues more quickly. Giving a police officer a first aid kit, for example, may allow for treatment of minor injuries without needing to wait for an ambulance to arrive. Defibrillators and chest compression units help your medics resolve major incidents efficiently. Technical tools will allow rescue teams to move obstacles easily.

Good decision making is required here. There is no point hiring police on bikes in a sprawling city with plenty of major roads. A smaller city with large park areas, on the other hand, would be perfect. Likewise, a helicopter ambulance will be an unnecessary expense in a small area but could be a life saver in an open urban setting.

Even with more numerous and better equipped teams on the streets, shifts can still get hectic. Major incidents such as earthquakes may strike, pushing your resources to the limit and putting your management skills to a harsh test. Such scenarios are very hard to handle as notification pop up constantly and the phone does not stop ringing. You will have some tough calls to make about who to prioritise. 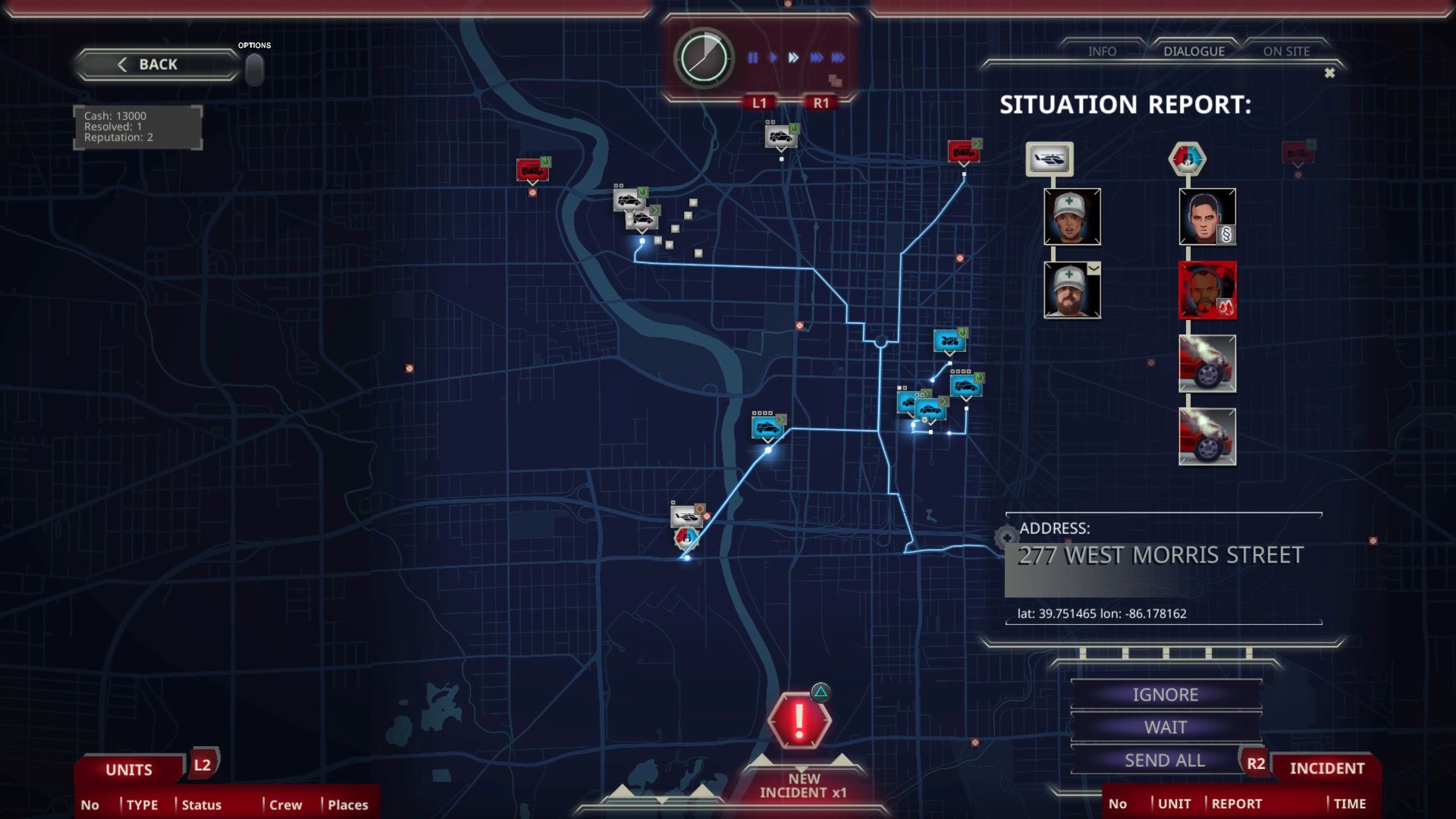 It was here that I had a couple of issues with the game, however. First of all, before I experienced an earthquake in the game, my units were responding to calls as normal. I had firefighters getting a cat down from a tree, and police investigating loud noise at a house party. When the earthquake hit and I needed all units urgently, I still had to wait for these incidents to be resolved. The squad car at the party even called for back up due to a violent incident – this did not seem a likely scenario in the immediate aftermath of an earthquake.

Another issue arose from the fact that when you are in a call, you are locked in. You cannot respond to any notifications until the call has ended. The only way out of the call quickly was to hang up and ignore it, but as the caller was describing children trapped under fallen electrical cables, that did not seem like a good idea. I got all the info from the caller and advised him how to secure the area, but in the meantime, several notifications had come up (and one of my police units was still dealing with that house party).

An option to send immediate help while in the call is sorely missing here. I have heard about several real-life incidents of 911 operators dispatching an ambulance and staying on the line to offer advice or comfort the injured caller. In this game, you can stay on the line but (as far as I can tell) you can’t dispatch help until the call is over. In one case, I was talking to man trapped under a car. He was panicking, and I was stuck in a call with him while other emergencies were going unattended. Perhaps this is part of the dilemmas that the game creates for the player, but sending an ambulance while talking to him was a missing option that would have been useful.

Selecting and directing units can be a but fiddly as well, especially with a PlayStation controller. The interface is essentially a point and click one that feels like it would be better suited to a mouse or touchscreen. On a few occasions, I selected the wrong unit, especially when I had several units close together. This was only a minor irritation though, and with time I got more used to the controls.

911 Operator is an engaging game and definitely has that ‘one more turn’ factor. The setting is realistic as are the cases. The air of realism is enhanced by the superb voice acting in the calls and the dialogue options that are presented. The only aspect of the game I did not like was the fact that you get locked into a call once you pick up the phone. That aside, however, this is a game worth playing, especially if you a fan of the ‘job simulator’ genre.