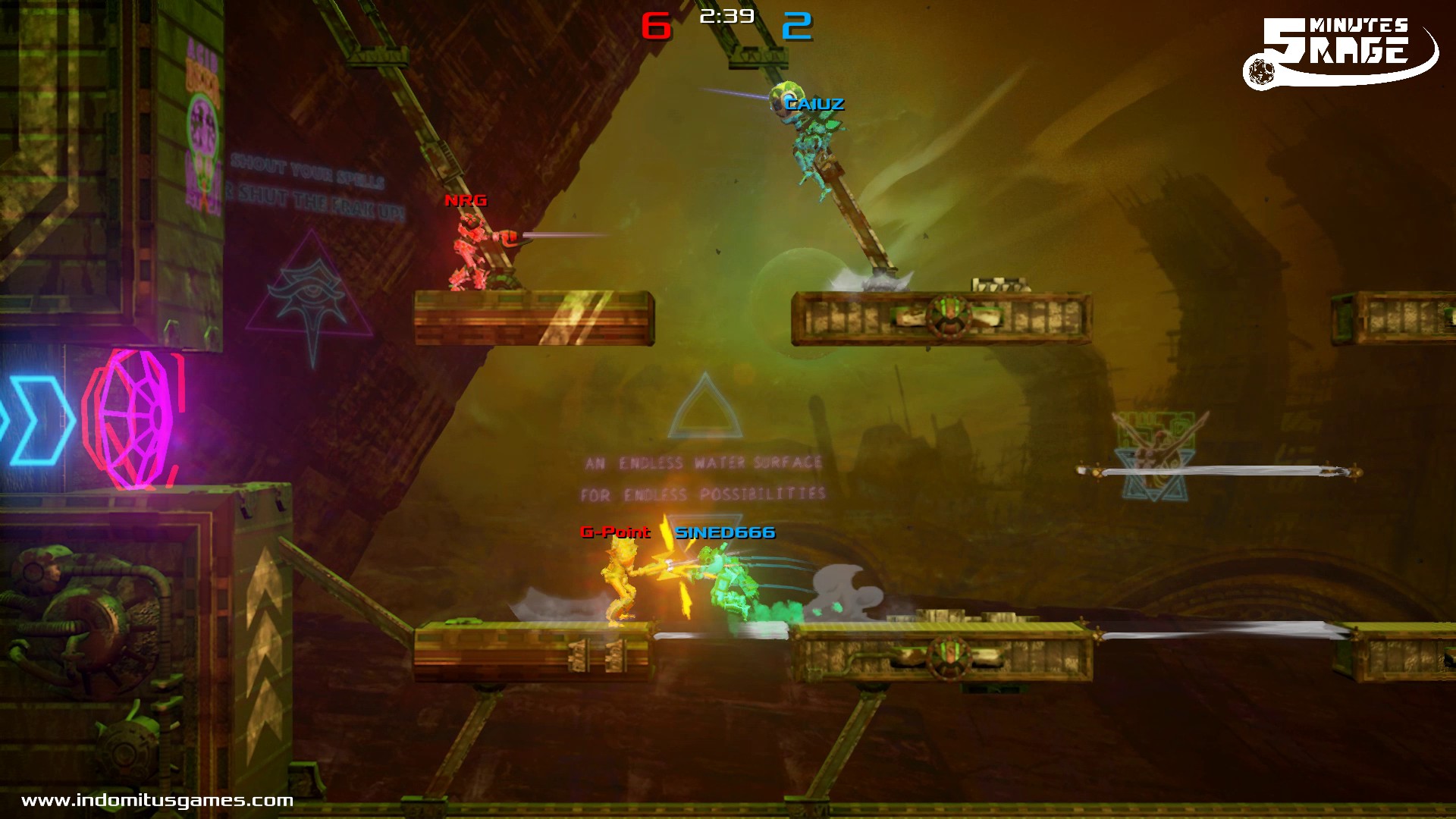 When I first watched the trailer for 5 Minute Rage, it felt like a cross between Rocket League and DOOM’s game mode, Infernal Run. It wasn’t until I began playing 5 Minute Rage that I realised how addicting and fun this game is and the incredible potential it has to make its mark on the competitive gaming scene.

5 Minute Rage is the second title from Italian developers Indomitus after their debut fantasy adventure game, In Verbis Virtus. Yet they have successfully shwon off how versatile they are as a developer. The aim of 5 Minute Rage is simple; get hold of the ball, blast your way through your opponents and score. It doesn’t sound complex, but the experience that Indomitus delivers immerses you in their own retro-styled 1980s sci-fi world. Although there isn’t any backstory tied in with the setting, nor a single player mode to engage with, it becomes clear that the game was designed for multiplayer anarchy, and it truly exceeds in doing so. The game thrives on multiplayer, with there options for a 1v1 or 2v2 match types, as well as being able to play with a friend locally in online games. 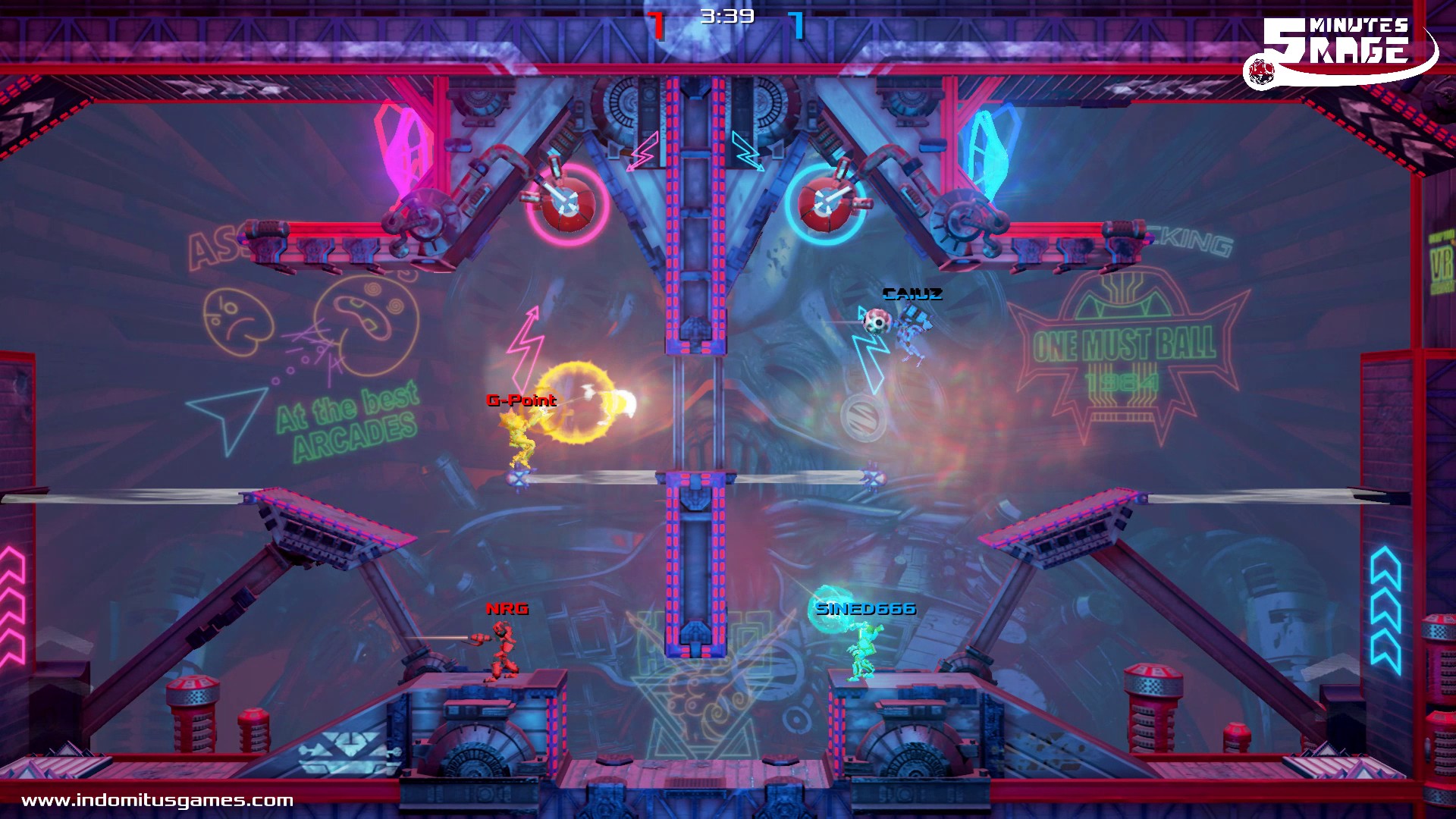 The game offers a short, but well-thought out tutorial. It doesn’t take long to complete however it shows off all the abilities and moves you can perform with relative ease. Despite the numerous actions you can pull off, the controls are suprisingly simple and easy to grasp. After a few competitive games, everything you do feels natural and fluid. With Indomitus opting to keep the controls relatively simple, it makes for some incredible, frantic gameplay which isn’t reserved for experienced players, but for newcomers too. Although there is room to expand and develop your arsenal of techniques such as timing your shield to deflect power blasts as well as firing the ball and an opposing player into their own goal, there aren’t various button combinations that allows players to gain an advantage. After playing a couple games with a friend, I was already witnessing incredible matches that finished 7-5 and 4-6. It felt like we had been playing this game for months which is a testamnet to Indomitus’ slick gameplay coupled with easy controls.

5 Minute Rage excels in the graphics and sound department too. Powered by the Unreal Engine, the 2.5d platformer is brought to life with bright, vibrant colours. You’ll probably find yourself constantly shooting your blaster and watching the colourful, yet striking projectiles hit the walls and floors around you. The soundtrack draws inspiration from various 80s sci-fi themes which brings to life this dystopian world that Indomitus has created. The backdrop of each arena is subtle yet pleasing on the eye, and each map includes various neon-type ads that make for some great Easter eggs and references to other franchises.

5 Minute Rage allows each local player to customise their own character, allowing them to change their name, colour and every plate of body armour that they wear. The vast customisation options allow each player to create their own, distinct character. It also opens the door for Indomitus for future designs and potential endorsements similar in how Rocket League incorporates other brands to their own items. 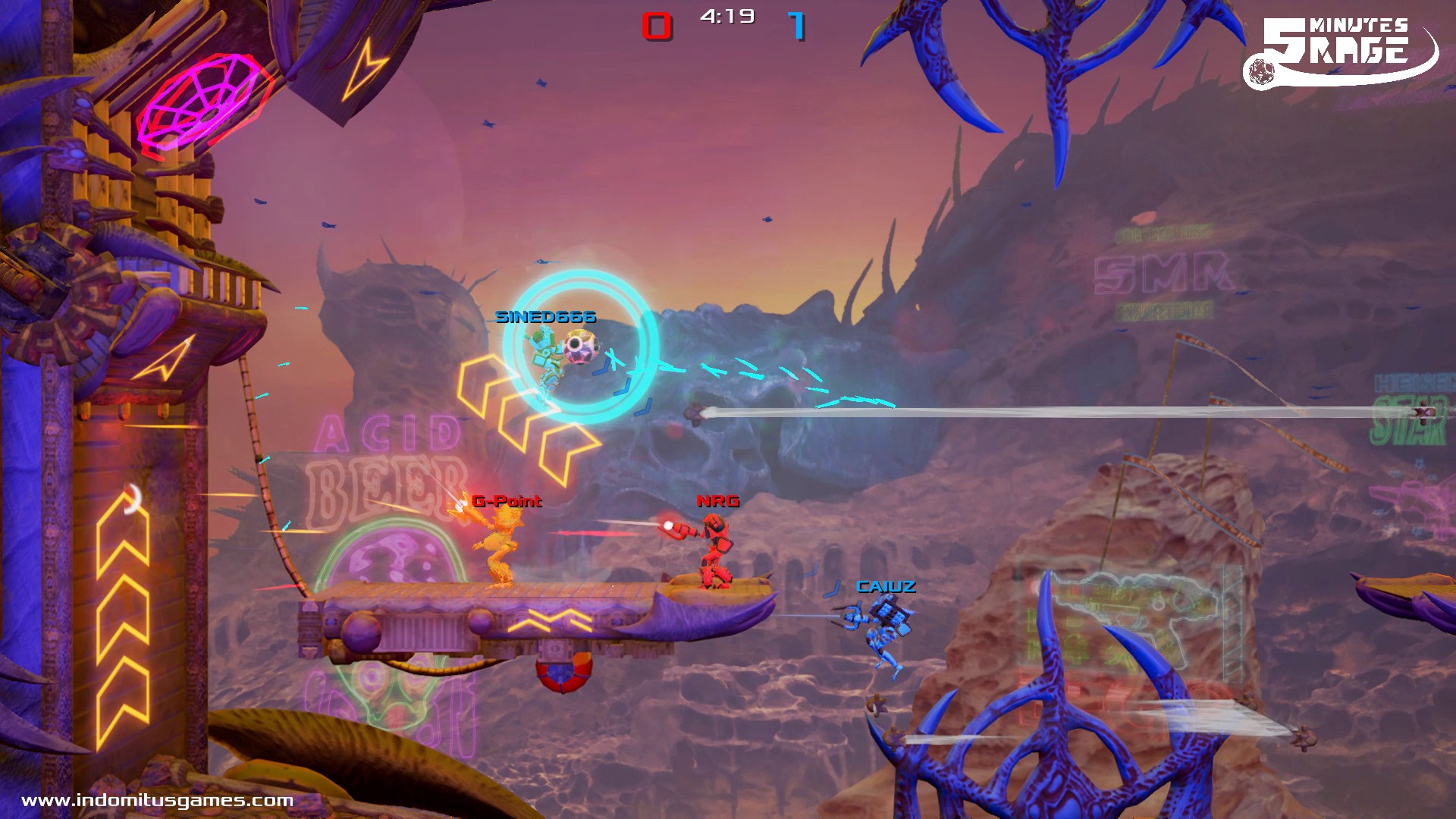 Unfortunately, I struggled to get into any online games during my playtime. Public matchmaking was only opened for limited times and when the feature was available, I couldn’t find an active server to join. It was hard to find any news on why online seemed to be deserted given that their dedicated discord channel didn’t make any announcements that online was available. I was interested to see how a 2v2 dynamic works online and how it changes the game. The passing feature, which is covered in the tutorial, works surprisingly well and is an indication that Indomitus wants 5 Minute Rage to be a team game and encourage passing amongst teammates.

The map designs are well diverse and original from one another, but with only five maps to play on, there isn’t a lot of variety. Although maps aren’t too important in this platform-football hybrid, it remains to be seen what Indomitus has planned for future arenas. There’s also an absence of playable bots so if you can’t get online or there isn’t a friend round, then you’re left trying to have as much fun as you can blasting idle opponents in the face. I experienced a bug where the ball would vanish from the map, however it was the only problem I encountered in what is an already polished game.

5 Minute Rage has great potential in becoming a great game to play, both online and locally. Indomitus have done exceptionally well on creating a game that offers fluid gameplay, beautiful to look at but most importantly, being fun to play. The only worry about games that are built around a competitive atmosphere is that they must be constantly supported to entice new players as well as keeping current ones. 5 Minute Rage has potential to include new game modes and map designs though, so it’ll be interesting to see how the small yet talented team at Indomitus support and develop 5 Minute Rage given the foundation they’ve laid for its future. For now, the game remains incredibly fun and addicting to play and if supported right, it could become a very popular and successful title.