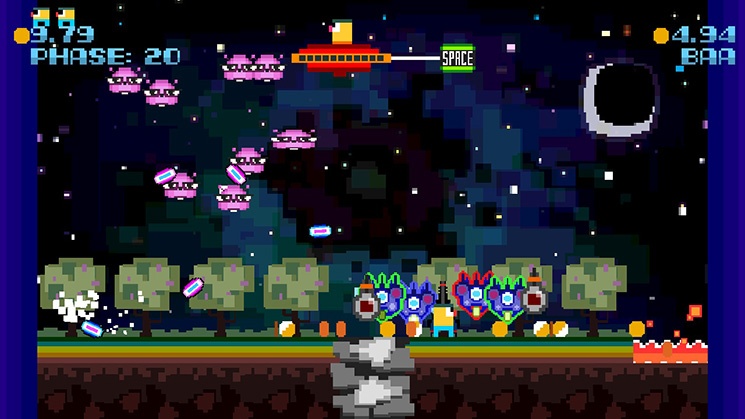 Veterans of the arcade will recall that a vast number of those “classic” games had little to no story line at all. Take, for example, Arkanoid, one of my all time favorites. There isn’t a story. Sure, you can go online and read this bizarre mythology about how you’re fighting a space God and this is some kind of advanced weaponry, but who the hell knew that when they were busy bouncing around balls against blocks? The developer and probably no one else. So, even though sweeping and epic story lines are nice, they are, by no means, required if you’ve got the gameplay and the addictive quality that makes players stay invested.

Space Dave is the spiritual successor to Woah Dave, which is a game that I think I spent only a handful of minutes playing on my PC some moons ago. You don’t need to know the plot of Woah Dave to enjoy Space Dave, because, well, Space Dave is totally different. There are aliens coming. Dave needs to fight them off. They come from the sky, you’re on the ground…do the math.

Space Dave is a straight up vertical shooter that also has the unique situation of being only semi-fixed. By that I mean, yes, Dave is on the ground, but he can move back and forth, so you at least have a Space Invaders advantage. But it also goes beyond that. Dave has this weird little jumping ability that’s part hop and part fly, mostly because it’s rocket assisted. What you end up with is the ability to coast and kind of float along the ground as long as you keep the jump button held down, but that’s not a guaranteed promise of staying aloft. You will crash back down eventually, and you need to be careful, because the game has a lot more variety and twists to it that you may first expect. 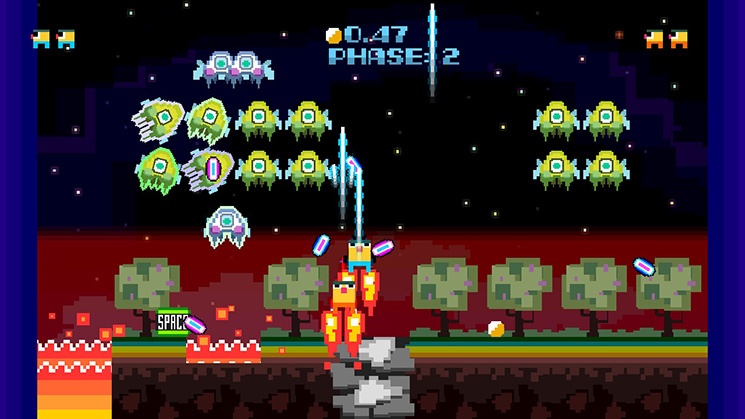 Take, for example, the layout of the game: you get stuck with a block of enemies who move left to right and then descend a little before moving again. It’s pretty standard. You have a gun with infinite ammo, and you blast them out of the sky. If that was the whole story, then this review would be 200 words and I would have already moved on to why Snake, Rattle and Roll is Rare’s best game ever. Instead, by the second wave, you understand things are a bit different. The enemies break off of formation and start their own individual patterns of movement. Some change form and others change their abilities entirely. After I shot down a couple rogue enemies, instead of exploding their corpses hit the ground and started flashing. Too late, I realized they were time bombs and they took part of my body with them. I would later find out you can pick up the corpses and toss them off the screen, and, in one spectacular case, at enemies who fly a bit too close to you with good timing. Superb!

And Dave himself is no slouch either. Space Dave picks up coins because, well, that’s what you do, but you also find powerups that crop up every so often, with some being temporary and others a bit more permanent for your play. Your primary blaster will, eventually, become more powerful, with split streams and a seemingly heavier hit to it. You’ll pick up drones that can help you out for a bit, and you can even use the power of space to possess aliens and get them to fight for you for a brief period of time. This possession mechanic was infinitely more powerful and more helpful than anything else, because it also had the benefit of taking an enemy off the screen and making him work for me. Dave can only take one hit before dying, and only can die three times before game over occurs, so getting the build to that super powerful situation is tough, but not impossible.

And the game is hard, I should have mentioned that up top. Even though the graphics are more souped up to look retro chique, the truth remains that MiniVisions wanted this to emulate the games of yesteryear on more than one level. There is a relentless stream of bullets, plenty of falling and moving enemies, and even gigantic bosses that surprisingly work in this fixed sort of arena, but are by no means easy to deal with. You’ll get shot a lot, the floor will turn to lava, and, even if you put out the lava, it usually becomes water that you can drown in if it’s too deep. All of these things happened on normal mode, in pretty high frequency. There are two difficulty levels higher that you can choose if you hate yourself, and they absolutely punish you. 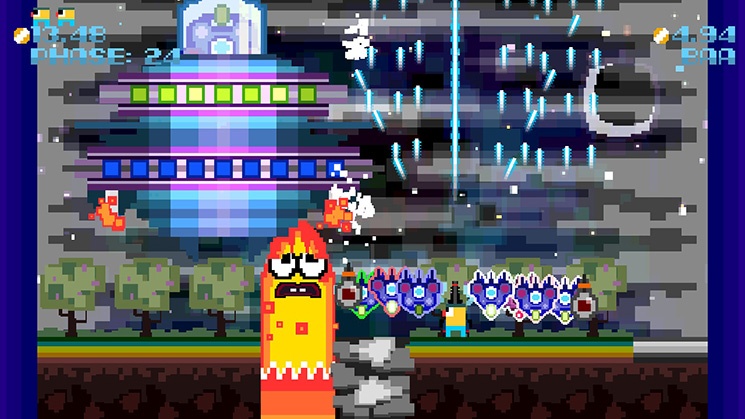 The only missed opportunity I really saw in Space Dave was a lack of variety in how the characters came across. Space Dave has a small stable of different avatars to use, including some familiar faces (Commander Video is everywhere nowadays). But it’s entirely aesthetic: no one has different powers or abilities. Though I admire this and think it makes the game fair, I would have liked to see, similar to Super Meat Boy, a bit of difference in what everyone had to bring to the table. Then again, by keeping it level, people can pick their favorites based entirely on looks and not how well they can rock with one character over another.

Space Dave is, at its heart, and honest and simple shooter that has plenty of surprises mixed in to keep it interesting. Though not necessarily the type of game that I’d come back to time and again, it’s certainly good enough to maintain a staying power for fans of the genre and even catch a few of us off guard. If you’re looking for a new, bizarre adventure to bring back your arcade dreams, Space Dave is a great place to start.