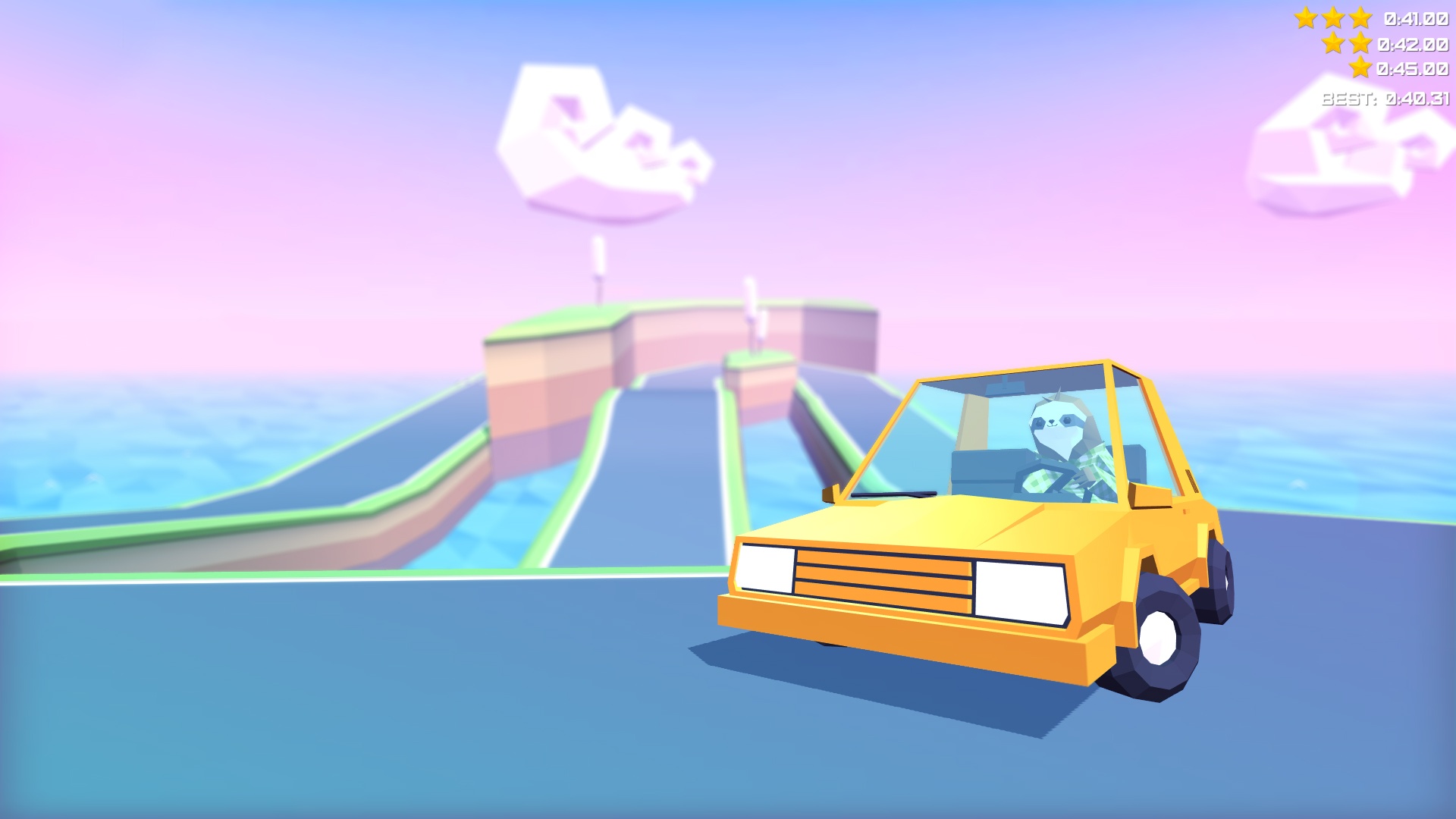 Slowdrive describes itself as a racing game. Now with any traditional racing games, you’d assumed they’d be fast-paced and action-packed. Usually you’d be right with these assumptions, yet Slowdrive doesn’t contain any of those elements. In fact, it’s far from being fast and riddled with explosive cutscenes. It’s why I didn’t have much expectations for this game, but after playing through stage after stage, Slowdrive could be the most engaging, challenging racing game I’ve played in a long time, and here’s why.

Like most racing games, the plot isn’t important nor the focus point of Slowdrive. A shortcut scene introduces you to a sloth who, after sleeping for a considerable amount of time, is lost and only has his car to get himself home. There really isn’t much left to add to that, and with the absence of a tutorial, the game leaves you to your own devices to get through the challenging 60 levels that awaits you. In all honesty the simple plot suits Slowdrive because at the end of the day, your aim is to get the fastest times on each stage, not to be told a compelling, deep, meaningful story about how the sloth came to be. 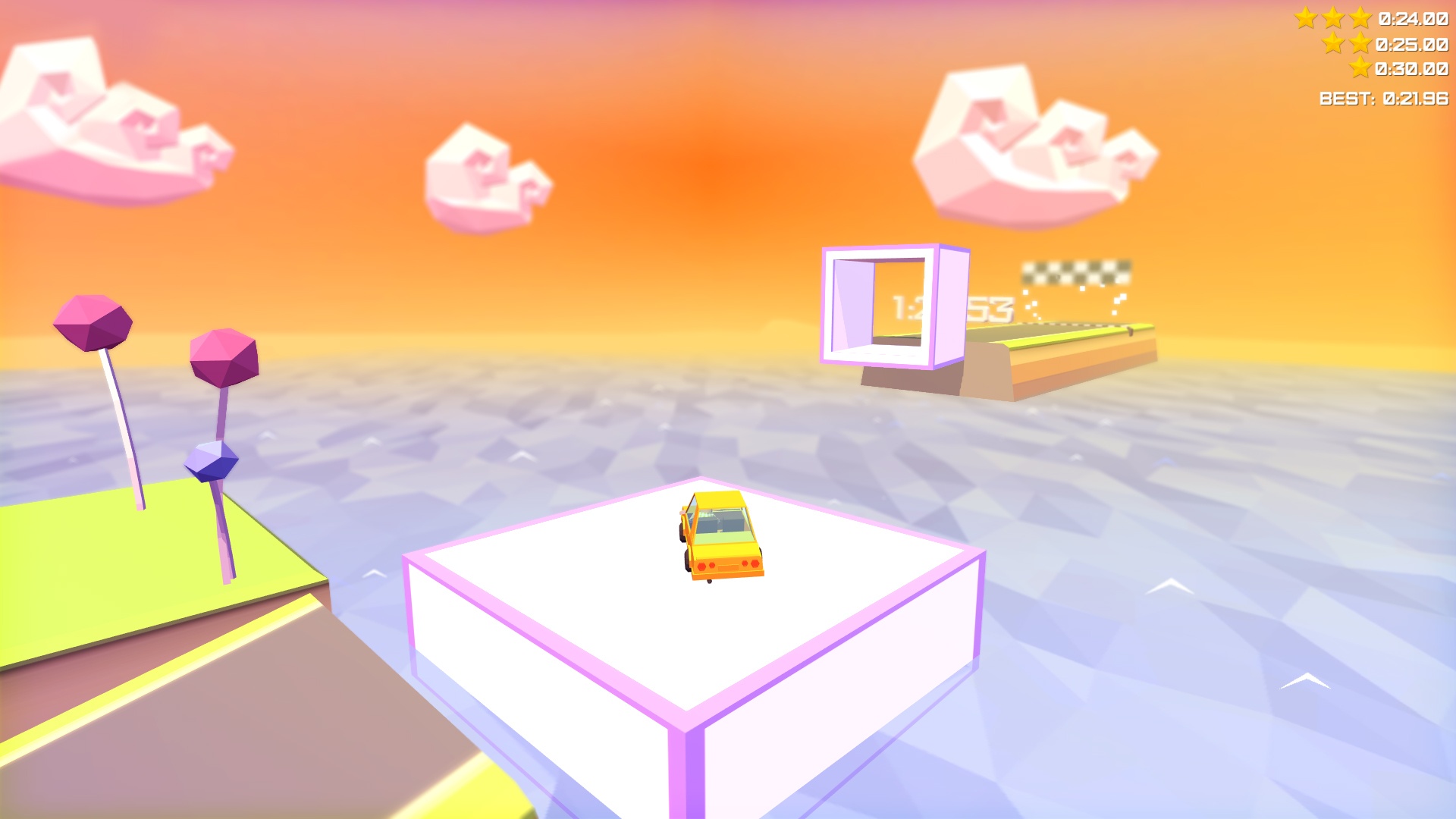 It’s hard to criticise Slowdrive’s graphics because its art style works well with the challenging levels and the absurdity that a smiling sloth is driving a car through each course. Everyone loves a detailed, beautiful world but a lot of the time, amazing graphics come at a cost at usually undermining the gameplay of the title. Slowdrive delivers a 3D low-poly world that runs smoothly and consistently. Sure, over time it could be interesting to see the backgrounds developed further but at the same time, I enjoyed the simplistic world of Slowdrive. It doesn’t take away from the driving experience which really allows the game to focus solely on the gameplay.

For a title created by just one person, Slowdrive offers plenty of content and enjoyable gameplay. Each track is broken down into three stages and after they’ve been completed, the player runs through all three together. Don’t let its friendly, kid-like presentation fool you, Slowdrive is a difficult game. Most stages in the game offers multiple routes that can be used to get to the finish line. Although the game emphasises that shortcuts may not always result in the quickest time, Slowdrive encourages you to replay the same level a few times over, pushing you to do all you can to shave off precious seconds of your final time. 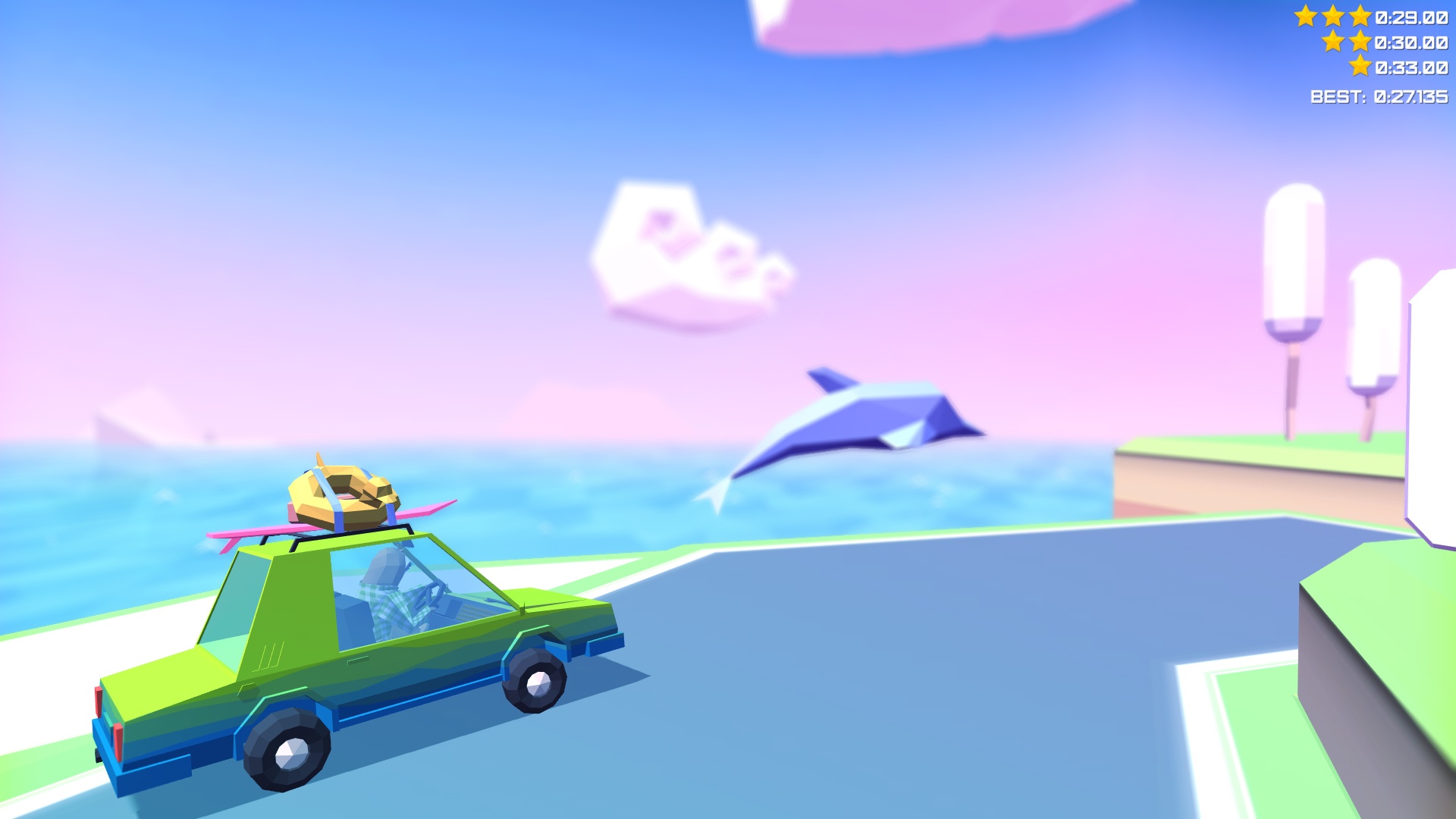 Although there’s only one main game mode, Slowdrive does offer a couple of cool features to improve its longevity. Ghost mode can be on or off, allowing you to race against the best time you had set on the course previously. There is a leaf hidden on each stage too, meaning the player must explore the map rather than beat the time. Leaves are used to unlock bonus stages as well as items, cars, and skins in the customisation menus. Some are easier to get, but most them require a great deal of concentration and self-awareness to find, otherwise YouTube will be your best friend. Its worth noting that there is no way in improving the stats of the car. There aren’t any performance upgrades to give yourself the edge. The game encourages you to improve your driving skills by experimenting with the way you tackle corners and ramps. It’s a throwback to older arcade games which makes Slowdrive difficult and challenging but when you achieve three stars, you do feel a sense of pride and accomplishment.

Overall, Slowdrive really surprised me as a racing game. Given that the main character is a sloth, it should’ve been an indication that this wasn’t going to be a traditional, simple driving simulator. Onebraverobot has taken an old-school approach but simply refined and modernised it, allowing it to offer a complete, enjoyable, and fun game. As I mentioned earlier, the team at Onebraverobot consist of just one man, Dmirty, who developed this title from his first solo project. Slowdrive truly captures the essence of pure indie gaming. It’s a title that offers hours of fun, easy to pick up and play by any gender or age and is a challenging game. Who would’ve guessed that a sloth can make a driving game fun.