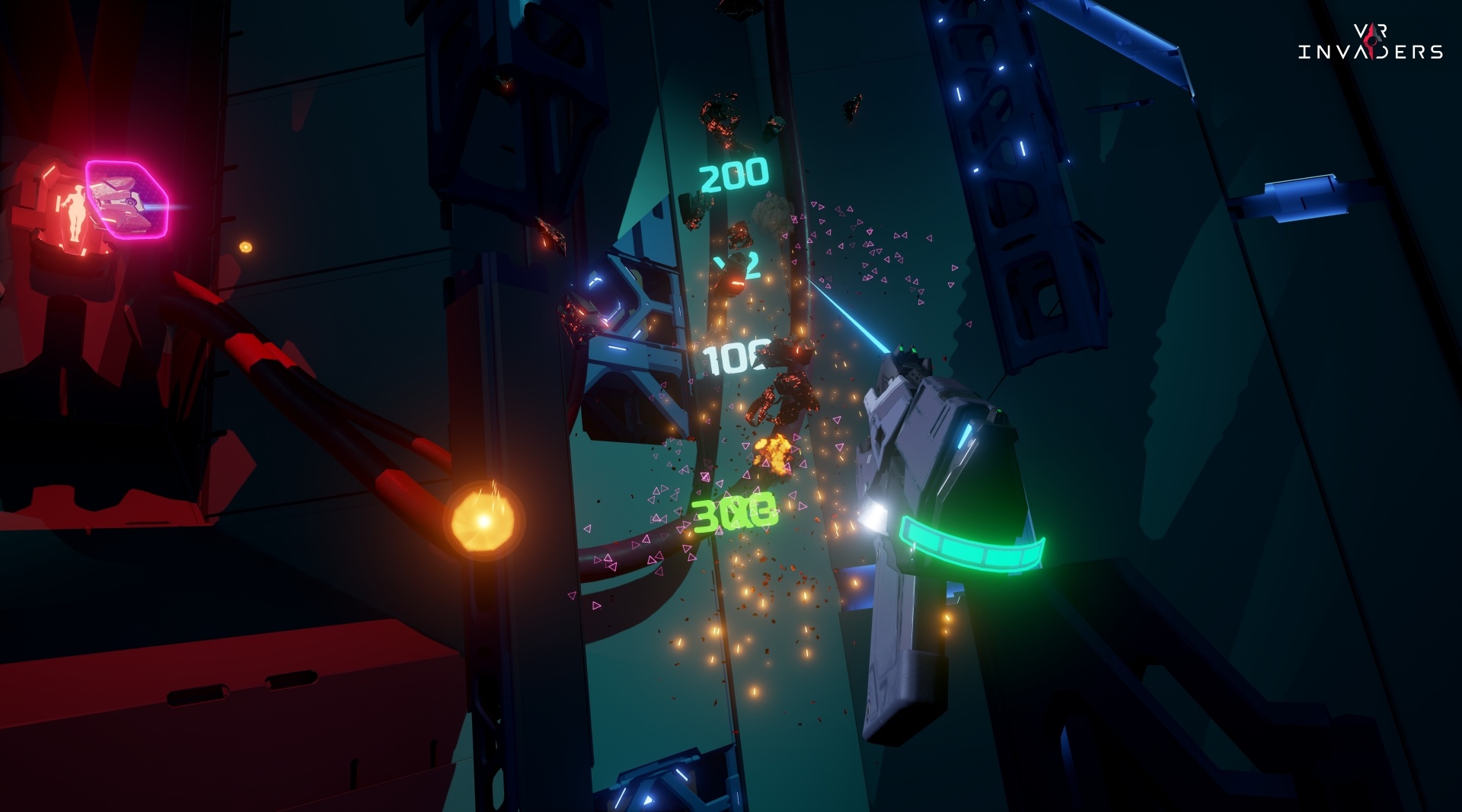 I’ve been looking for a nice original way to explain VR Invaders because after playing this for a good few days I think it deserve to be reviewed as more than just another wave shooter. Over the last few months this type of game has had numerous releases, in fact almost every week. Some have been really good with Dick Wilde and Shooty Fruity springing to mind (read my reviews for both these titles on this very site) and some don’t deserve a mention here. But even though VR Invaders offers nothing new or original the mechanics and addictive nature just demand your continued attention.

Developed by My’s, VR Invaders can’t escape the comparison to the original 70’s and 80’s cult classic Space Invaders. Apart from sharing a similar title you are also performing the very similar task of shooting wave after wave of scripted attackers while they send projectiles in your general direction. The developers have basically taken the premise of the original old school game and brought it into the modern gaming era adding all the 21st century’s bells and whistles.

Space Invaders had you moving left to right shooting the scripted pattern alien ships while using the three pixellated deteriorating barriers to avoid the return fire, once you had defeated the set number of attacks the Boss ship arrived to challenge you. In VR Invaders you move your head left to right to avoid oncoming missiles, the alien ships are now computer viruses and you have a shield in your chosen hand to deflect anything getting to close (this too deteriorates if hit by the larger projectiles but regenerates over time). Once you have defeated the current set of attacking enemies the big boss turns up, so you see it is just like the classic but with a massive lick of modern polish and stunningly implemented VR. 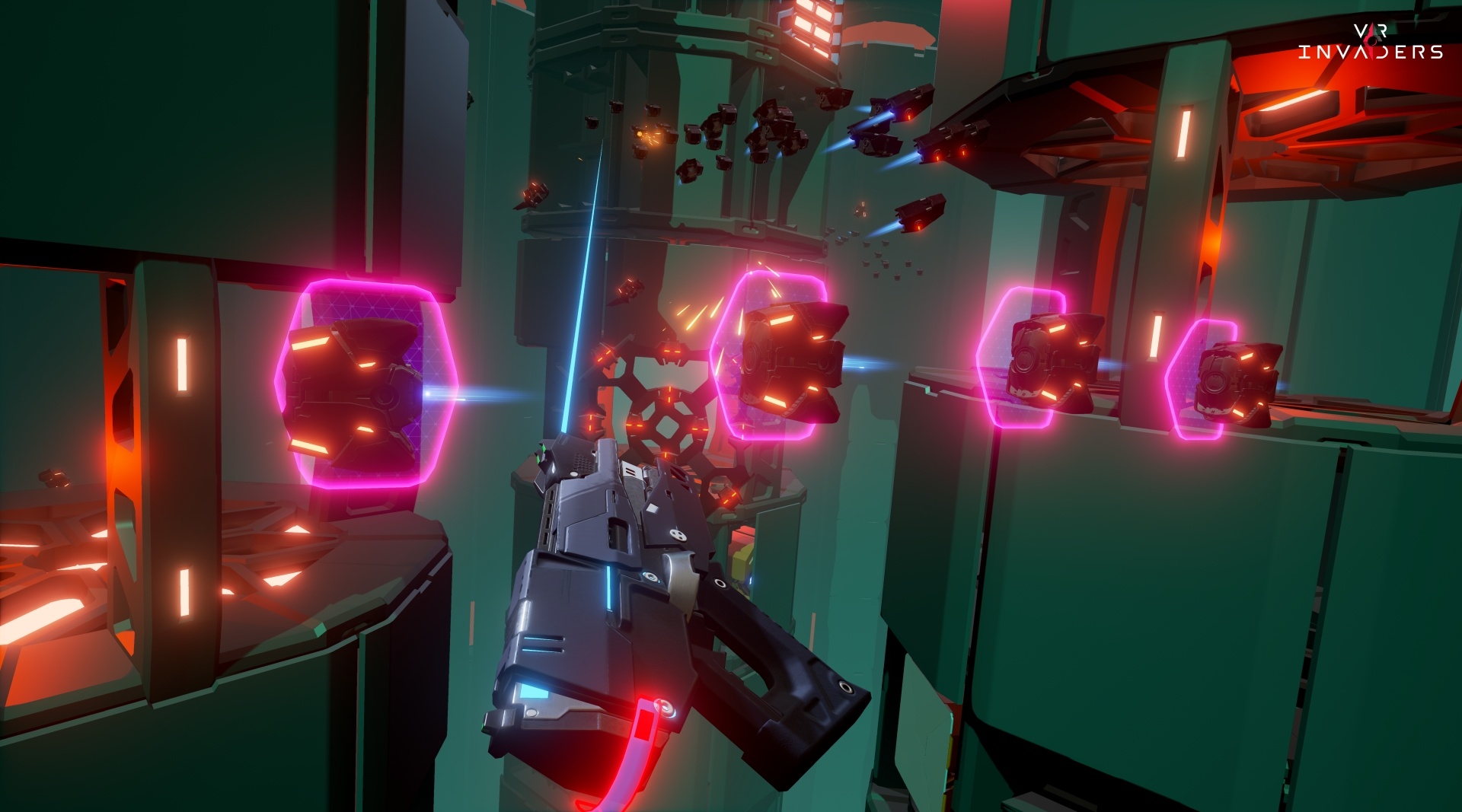 There is a story arc within VR Invaders but to be honest it seemed pointless and really wasn’t needed. You are called a “Diver” tasked with debugging the world-wide VR (basically The Matrix) in the year 2046. Along with this you must help people who have become alienated and lost within the VR World. Although the story sounds good on paper it really isn’t the game’s strong point and can be finished in little under two hours but you are given the option to switch off story mode and head straight into the challenges but as its only short it might be worth sticking with.

Every wave of attackers must be shot using your standard no thrills gun while defending the incoming using your shield. However, both weapons can be levelled up on occasion to really help increase your overall score. Reoccurring power-ups are hidden within the attackers and if you manage to hit one the upgrades become available.  Your basic single shot handgun can be transformed into a rapid non-stop shooter, a powerful shotgun or continuous laser and your shield upgrade offers the ability of slowing time giving you a brief chance to clear the entire screen of attackers. Other available power-ups are limited invincibility and dual weapons and both can raise your total score considerably if obtained successfully.

Another way to score big is to build up a multiplier, this can be achieved in various ways like ending the attack quickly and efficiently or shoot the incoming missiles instead of deflecting them. But like most games of this type there are many ways to complete this achievement and continue increasing your multiplier that I haven’t yet found. VR Invaders has the three standard difficulty options Normal, Hard and Insane. These difficulty levels can vary drastically by limiting your gaming options, i.e. minimal ammo or limited health. 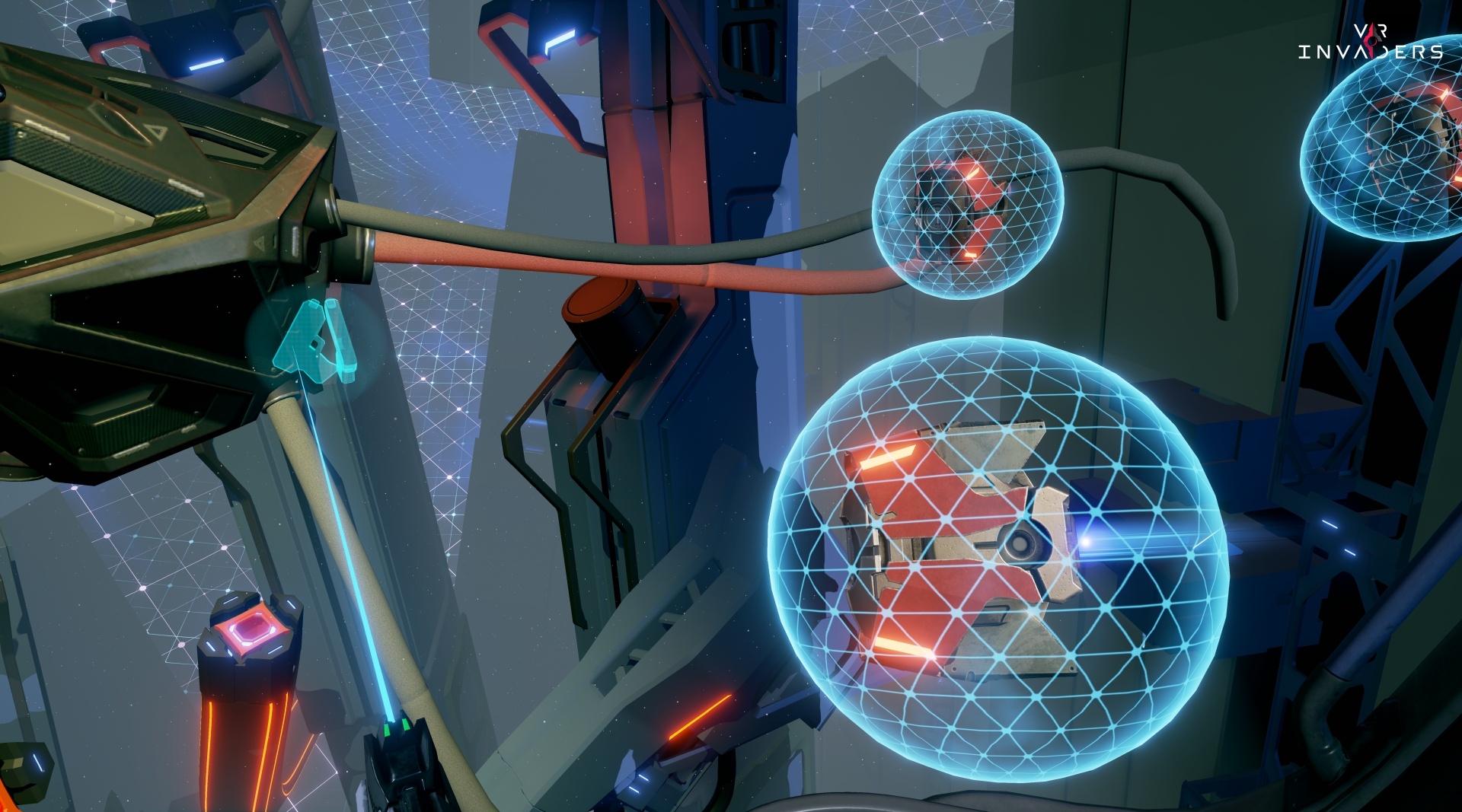 The main game has eight tightly packed levels but once you’ve completed this you have the shooting gallery and survival mode to compete in. Sadly, there are no online leader boards to encourage continued play but to be honest I found it to be extremely addictive and I didn’t miss the online challenge of other players at all, my individual goals and encouragement was enough.

Overall VR Invaders is a great rehash of an original classic, a simple game with stunning visuals along with sublime VR and motion control (in my current gaming time it has never been off or miss-tracked). Also, it certainly has the addictive nature of its predecessor with the “just one more “becoming a familiar phrase. However, and to unfortunately finish on a negative note there are some issues with this title that can’t be ignored. Mainly the inability to play with the DualShock 4, it’s pointless shoehorned story, minimal length and quite high asking price, which is currently £15.99 on PSN Store. But if you have enjoyed previous VR wave shooters and play games for a continuing challenge than look no further than VR Invaders for your next quick fix, it has it faults but it’s certainly a VR title that demands to be played.