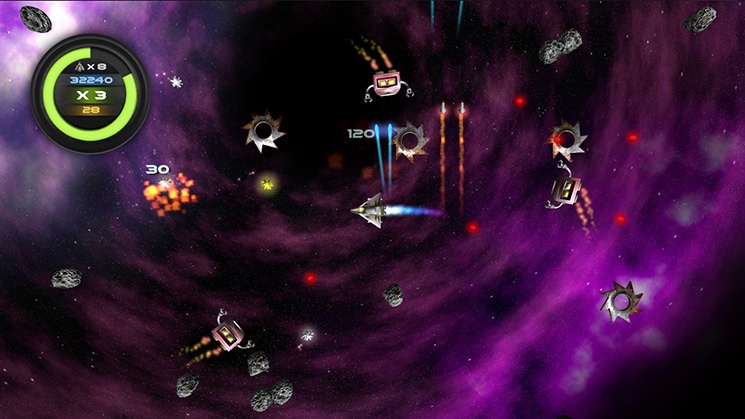 Black Hole is an arcade style, twin stick shooter that comes to us from Dufgames, a development studio I had never heard of in any capacity. A quick search reveals that Black Hole was originally created for the OUYA many moons ago, and, since I was neither a part of the Kickstarter campaign nor expended any energy whatsoever trying to chase one up afterwards, this game totally fell off my radar when it first came out. In any case, the Dufgames folk are taking a second swing at this engrossing shooter that boasts 40 levels, three ships and a bunch of different bells and whistles to make the whole package quite appealing.

Right out the gate, you realize that Dufgames has created Black Hole with a very retro feeling in mind. The stages are all generated on top of, well, a black hole, which is your primary and only arena, and then waves of enemies appear. It’s almost like a PacMan situation, where objects can disappear off the edges and reappear on the opposite, adjacent corner. Keep in mind, this only works for the enemies: if you decide to try and jet off into darkness, you’ll take a sizable hit to your health and will continue to deplete until you explode. Don’t do it. Your job is to sit in the middle of this black hole, which will not consume you, and shoot the ever living crap out of anything that isn’t you. It’s not hard to understand, but it is most certainly hard to do.

As a twin stick shooter, Black Hole delegates the left joystick to moving and the right joystick to shooting, and that’s really all you need to know. Sure, there’s a secondary weapon that you can eventually unlock, but that requires being unlocked by picking up the stardust that enemies will, on occasion, drop. You’ll notice that the drops come fast and frequently, and it’s essential that you do your best to pick up everything that gets dropped. You’ll always want to recharge your health (green drops), you need those stardust to upgrade the ship (yellow), a shield is always nice (blue) and the overdrive is amazing (purple). Overdrive is a wonderful moment when, for about five seconds, your ship maxes out it’s weapon capabilities and lets you blow up everything as fast as humanly possible. This drop isn’t frequent, but, when it comes, it either comes at the perfect time (surrounded by enemies) or the worst time (one asteroid left). In any case, it’s usually a game changer: you can seriously eliminate a ton of obstacles in a very short amount of time. 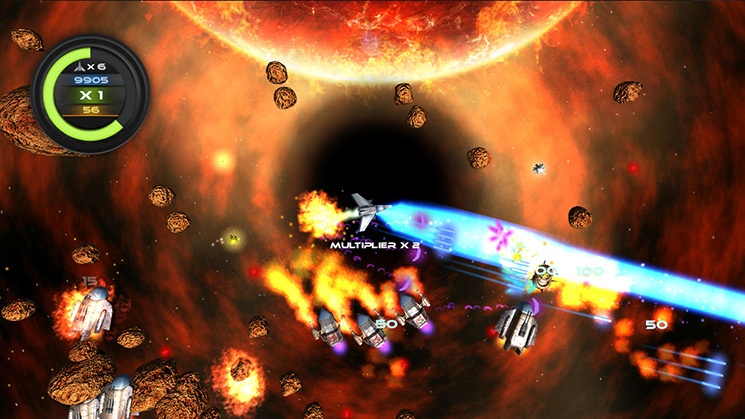 As for the enemies themselves, you’ll find that Black Hole has a good variety of offensive and strategic beings that are hell bent on your destruction. Sure, first wave is almost always asteroids, and those don’t necessarily come after you, but they can fragment and be plentiful enough to gum up the works. Then you start getting the robots that actually shoot at you. Then the space buzzsaws. Then the 360 shooting space stations. By the time you get to the first boss, you’ve already got an entire contingency of different and relentless ships that come after you from almost every angle, and they are different levels of tenacious, but all are pretty clear on their mission. Of everything, the only ships that I seriously hated were the aforementioned buzzsaws, not because of their attack patterns, but because of the noise. There’s this distinct whirring noise they make when even one is in the playfield, and it almost made me feel nauseated by the tone and frequency. Destroying the last one was a relief on multiple levels, so I made a point to always clear them first, regardless of other danger.

If you had the same ship from start to finish, I would say the game would be impossible to beat, because, even on easy, the density of the waves of enemies increases dramatically by no later than stage 4. Even with the usual three choices (fast ship, strong ship, balanced ship), none of them can really stand up to the assault without at least a bit of tweaking. The stardust upgrades, therefore, are essential and must be chosen from wisely. You’ll see a huge benefit from the first time that you beef up your attack strength or even shot speed, but you need to consider your play style with each upgrade. New players might be eager to unlock the secondary weapon, because, hey, who doesn’t like awesome missiles? But they’re infrequent in comparison to your main blaster, and you can absolutely amp that thing up to a better and more versatile laser for the same price as unlocking the secondary. In the same vein, if you’re able to be agile, the upgrades to your shield may seem unnecessary, because there isn’t a time limit on the levels: just keep dodging and evading things until you have a clean shot to where you need to go.

However, I do need to make note that speed is key to dealing with the first boss, and players should keep that in mind during the upgrade process. One thing players will notice is that the ship tends to feel lethargic, unless you grab the faster model, and this, generally, isn’t a problem so long as you have the firepower to deal with what the waves throw at you. However, despite losing only one life the entire first nine stages (and scoring some extra lives along the way), I was smashed into a fine space paste by the massive first boss, who could simply ram into me and I wasn’t quick enough to get out of the way. My second play through, I made sure to balance up my speed a couple notches, and it seriously made all the difference. 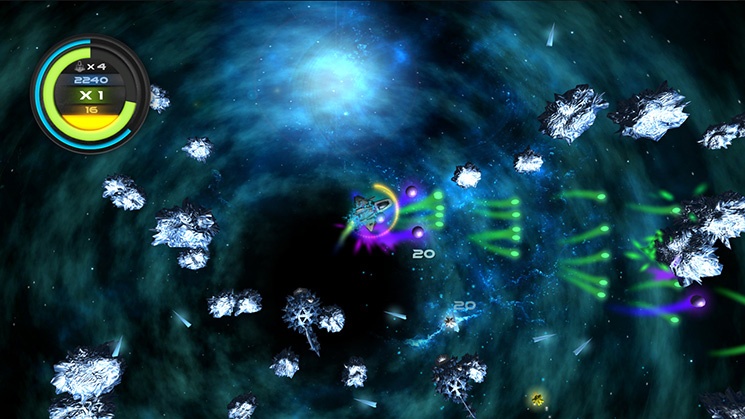 Dufgames also wanted to get a bit creative with this Switch port of Black Hole, and I applaud them for their ingenuity, if not the full execution. On the one hand, the HD Rumble has been marvelously implemented, and I loved the small, subtle feedback that game with most of the movements, and even more so when I took a hit. I think a lot of companies tend to lean hard on the rumble and not utilize the full range of what the Joycons can do: this is some of the best I’ve had since the Blaster Master Zero days. On the other hand, there was an attempt to make some different choices of control available, and this is where things fall a bit flat. Button controls, spot on, no complaints. Touchscreen, alright, it works, not my favorite for touch screen but quite doable. Motion controls are all of the damn place, though, and I think there should be a tutorial or guideline of some kind to help players understand the best way to swing the Joycons. The “instructions” only tells you the button layout, not the motion controls. Additionally, the experimental IR control is wonky too, but it’s labeled as experimental, so I can’t fault them for that. Other toggles, however, like speedrun mode and colorblind mode, have been thoughtfully included and work wonderfully for the players who want or need those options.

Black Hole is a pretty solid shooter, and there’s enough variety and replay value therein to keep an interested player coming back for more. I really appreciate the lack of storyline being forced into the beginning, because, in the end, the concept is what matters the most, and that’s what Black Hole does best. Why am I at this black hole? Where are these enemies coming from? How on Earth am I not being torn to shreds every time I cross the event horizon? Doesn’t matter: just keep shooting.