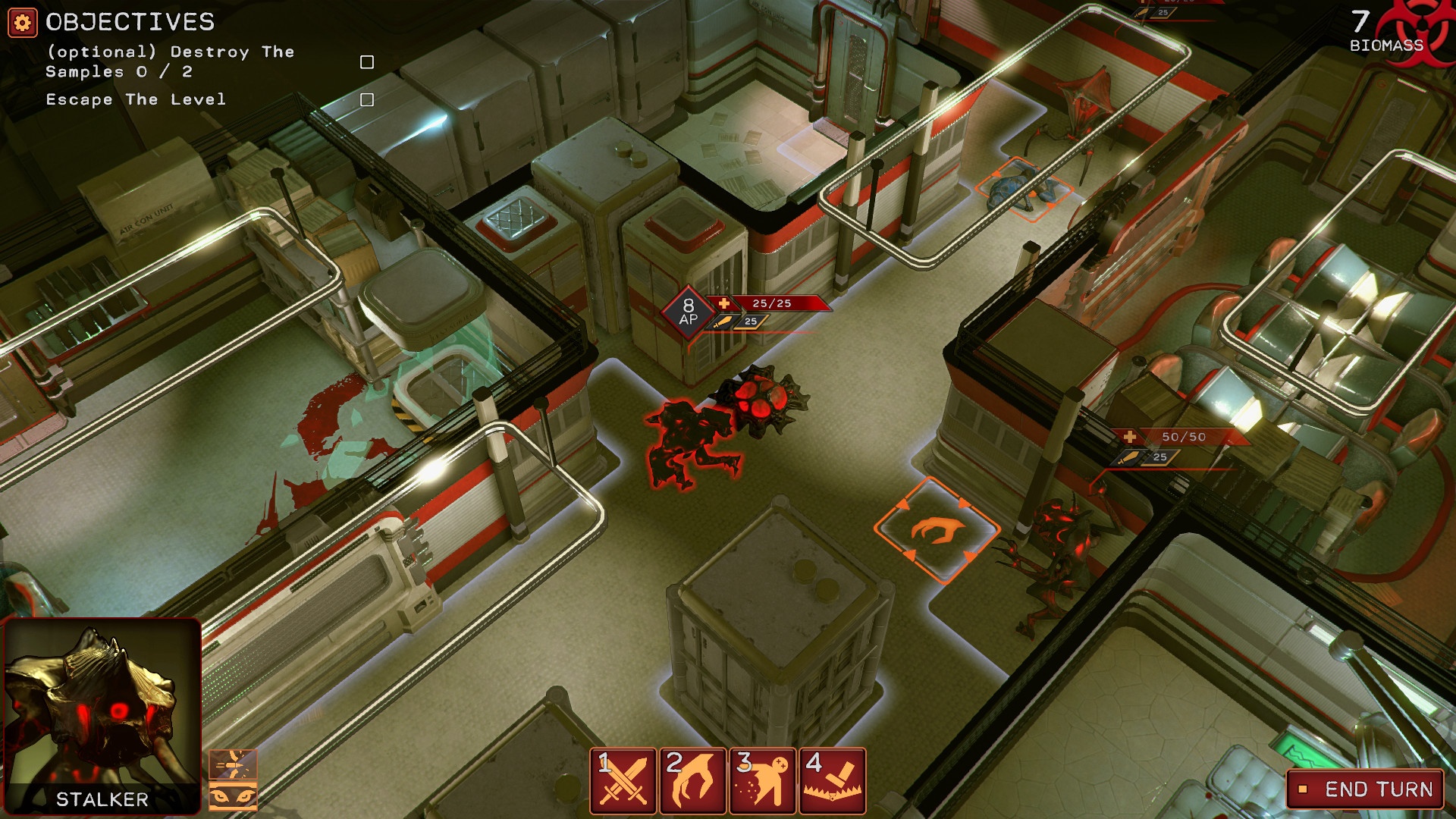 Attack of the Earthlings in a turn-based combat game that explores a setting which is not very often done, at least in video games, and that’s the idea of putting the player in the role of an alien organism fighting humans, instead of the other way around. Despite this being a turn-based game, you’d be wrong to assume that this is focused on all-out action head on, as the game surprisingly features a significant emphasis on stealth.

To put things into context, the player takes control of the Swarmers, a native alien species that inhabits the planet that the greedy earthling corporation Galactoil has landed on in order to exploit its natural resources. Faced with possibly the end of your planet as you know it, and also in a search for revenge for one of your dead offspring that perished during the landing sequence, you sneak your way into this human vessel. While the game seems to give off this rather serious tone during its first few minutes, you’ll quickly realize that there’s quite a lot of humour in the game, which is both noticeable in small text bubbles whenever humans “talk”, and whenever one of the game’s main antagonists decides to boss around the workers while trying to assure that everything is fine and that everyone should be working, while there are a bunch of aliens aboard the ship.

The entire game takes place across 7 levels, with each lasting about an hour or so, plus a smaller tutorial level to get you acquainted with the game’s mechanics. The game’s pacing starts off quite nicely, by gradually introducing you to new enemy types, which require you to approach them and deal with them, in different ways,  but this kind of stops shortly after you’re halfway through the game. After this point, you’ve pretty much seen everything that the game has to offer in terms of variety, which really left me disappointed, as the game was keeping things interesting as I played along. 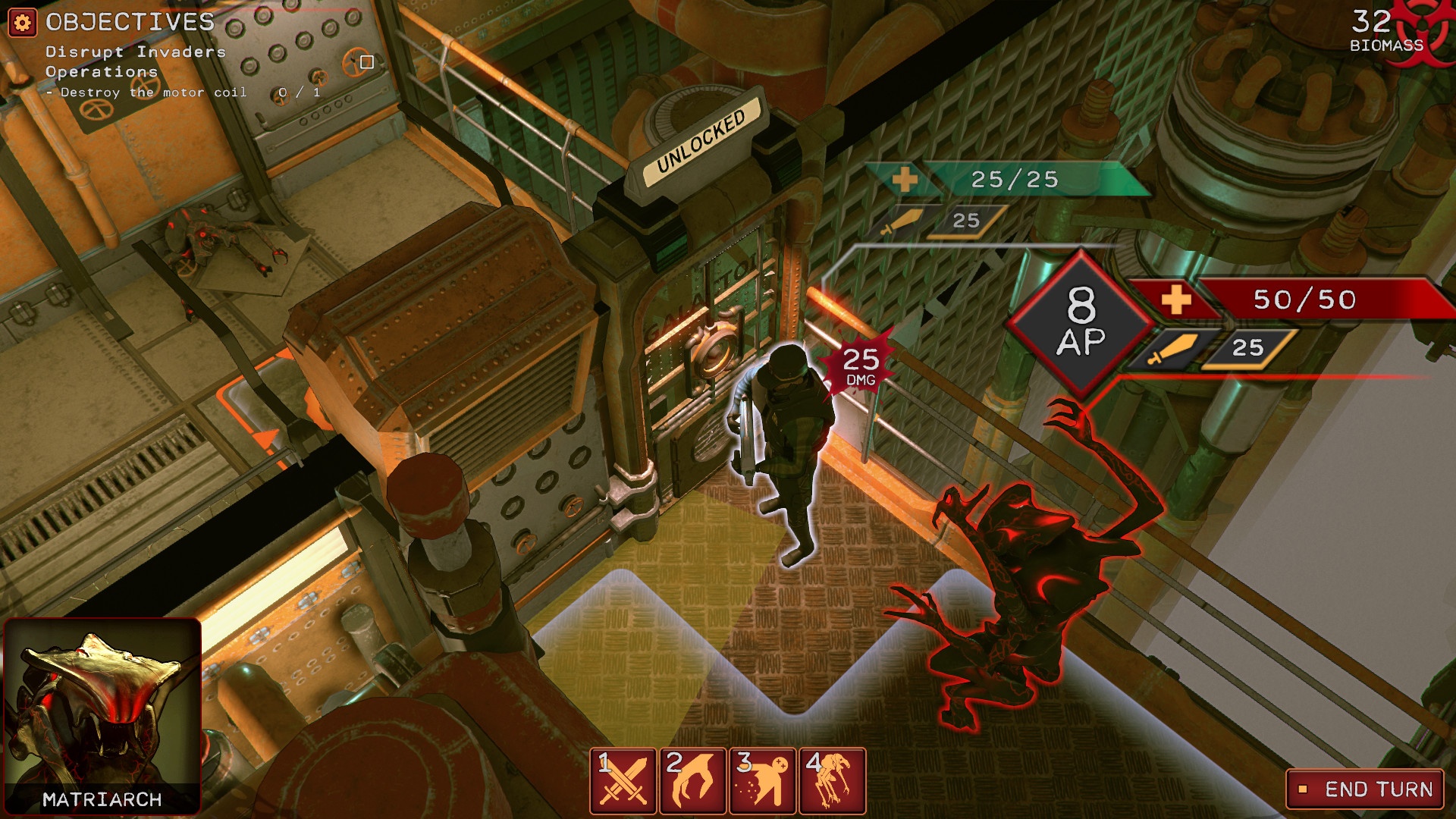 This isn’t a traditional turn-based combat game, in the sense that you always start with only one unit, the Matriarch. If the Matriarch dies it’s game over, so losing other units over her is always a preferable course of action. Whenever you kill an enemy, or whenever one of your own units dies, you have the chance to consume their body in order to gain biomass. This resource can be used to spawn grunts, which are the most basic units that you have available. Soon enough, you’ll gain the ability to mutate them into 3 other types of creatures, the Goliaths, the Disrupters, and the Stalkers. Each one of these has a very specific role, in the sense that each one has a specific enemy type that they excel in dealing with. The Disrupters are great for engaging in ranged combat, which helps deal with these enemies that explode upon death, the Stalkers are great for sneaking behind heavily armored targets and ripping them to shreds, while the Goliaths are just overall great for tanking considerable amounts of damage.

However, this is not the only thing that Attack of the Earthlings does to differentiate itself from other games in the genre. It was quite possibly the biggest surprise for me, when on my first few minutes into the game I realized that there is quite a strong emphasis on stealth here. This is evident in a few different ways, like for instance, enemies are usually unalerted to your presence until they spot you, but they will also investigate noises and corpses. There are also some hiding spots in certain parts of some levels, like a closet where you can hide a single unit, but there are also vents which not only can conceal grunts and Stalkers, but they can also serve as shortcuts for these units to traverse the level in a shorter amount of time.

After each mission, your performance will be evaluated based on a few factors, such as how many units you lost and the amount of turns that it took you to complete the mission, and then, you’ll receive a certain number of Mutagen points which you can use to upgrade your unit’s stats in future missions, as well as teach them new abilities. These abilities are exclusive to each unit type, and while the game’s generally not really that difficult, it’s nice to see the sort of combinations that you can come up with. Things like making enemies see one of their own as an alien is always fun, but laying down a trap in a corner and waiting for an enemy to walk over it while you’re on overwatch is also extremely deadly. There’s also the option to control an unalerted civilian, and use it to scout ahead, but one of the things that I really liked about the combat is the ability to execute group attacks. Essentially, these allow you to synchronize attacks so that you can take out multiple enemies on a single turn, thus avoiding situations in which you’d see yourself getting shot at right after taking down a single enemy 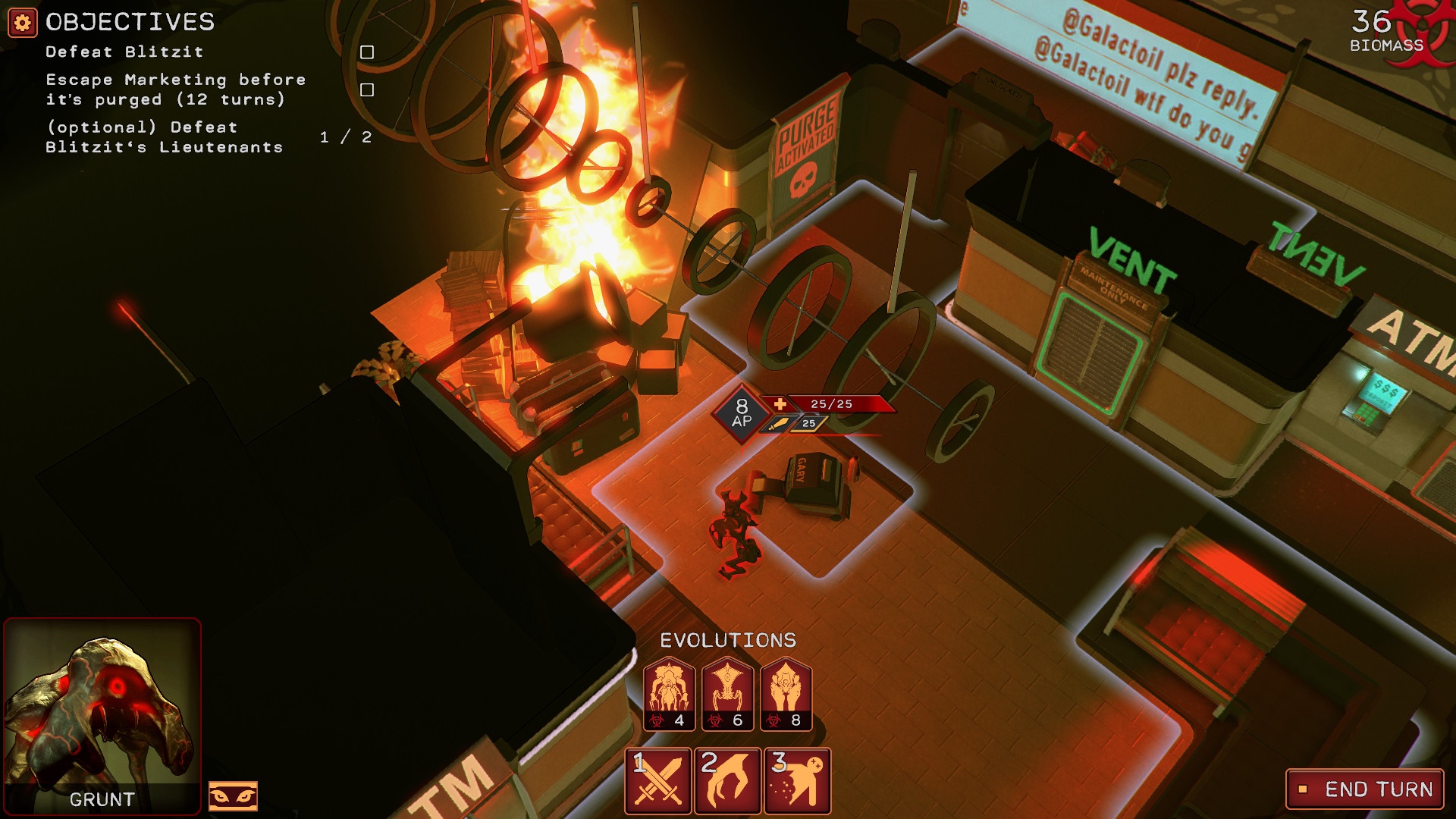 In terms of visuals, while the game doesn’t manage to keep up with the top of the line graphics, at least there’s not really any visual noise that gets in the way of the player. On the other hand, walking animations look rather floaty, and I found that input feedback is somewhat lacking, like when you select a unit, or if there are units with action points left in any given turn. Having to watch every single enemy move also gets boring rather quickly, it would’ve been nice to have an option to speed these up or skip them entirely. The music also doesn’t really help in this matter, as it feels like the game is playing the same track over and over on a loop.

Overall, Attack of the Earthlings is a nice little turn-based combat game with an interesting mix of stealth elements, and a setting which isn’t explored as often as I’d like in video games. However, that’s pretty much all it has going for it, the game tries to be humorous but I didn’t find it to be in most cases. This isn’t a bad game by any stretch of the imagination, it’s just that it doesn’t really offer enough content and variety for its asking price.