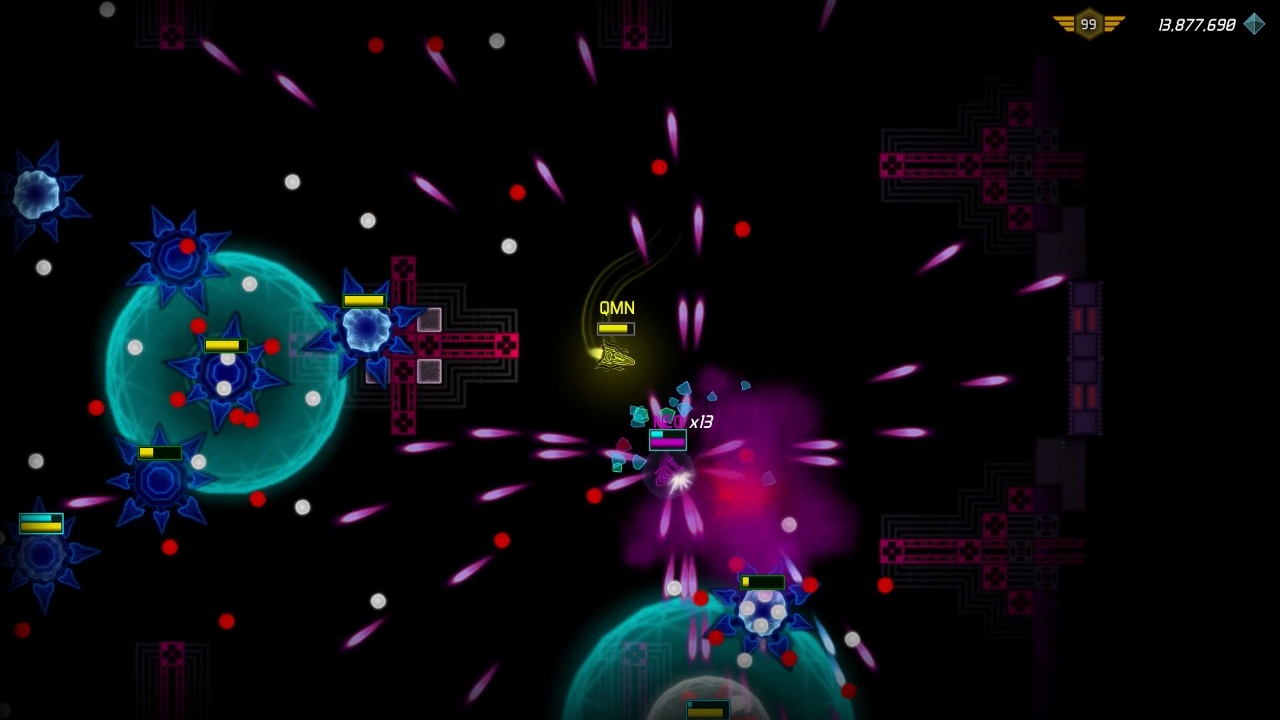 Everyone loves a good heist movie. The idea of a team of criminals coming together to pull of a score somehow makes the entire event seem sexy and intriguing. Ironically, if I just showed a video clip of eight different people commiting crimes, it would be abhorrent and probably boring. But when all eight of them work together to pull of a single event, somehow it’s the media circus that got George Clooney that eighth sports car he so richly deserved. But the best part of the classic heist movies is the twist when someone gets greedy and betrays the whole crew. Though far from a heist situation, the entire crux of Kill Bill is Uma Thurman’s character being double crossed and left for dead, and her revenge arc that comes at the price of two movies, some cinematography and, apparently, an overly dangerous and unnecessary stunt (but that’s a different article for a different blog). But, regardless, the biggest pull for a story is to see someone get wronged, even if they’re on the wrong side of things, and then try and find justice and sense of things.

Aperion Cyberstorm is a variation of this kind of tale (what, ya’ll thought I was reviewing Payday 2?). Set in a future where bullets and spaceships live in constant discourse with each other, you play a single ship pilot who was all set and working with his good buddies when, suddenly, everyone abandoned and turned on him. Now, two years later, he’s finally flying into the heart of his former mothership to figure out what the hell went down, and why he’s now got a massive target on his back that turns the fleet he once worked with against him. If I’m being totally honest, it wasn’t that compelling of a story to follow, and it’s kind of delivered in broken chunks between waves of ships and checkpoints. I mean, if it’s really worthwhile to you, by all means, slow down the gameplay and try to delve into what is going on, maybe it’s more interesting than I’m making it sound. In any case, it’s still a good setup, even if I didn’t really pay much attention to it. 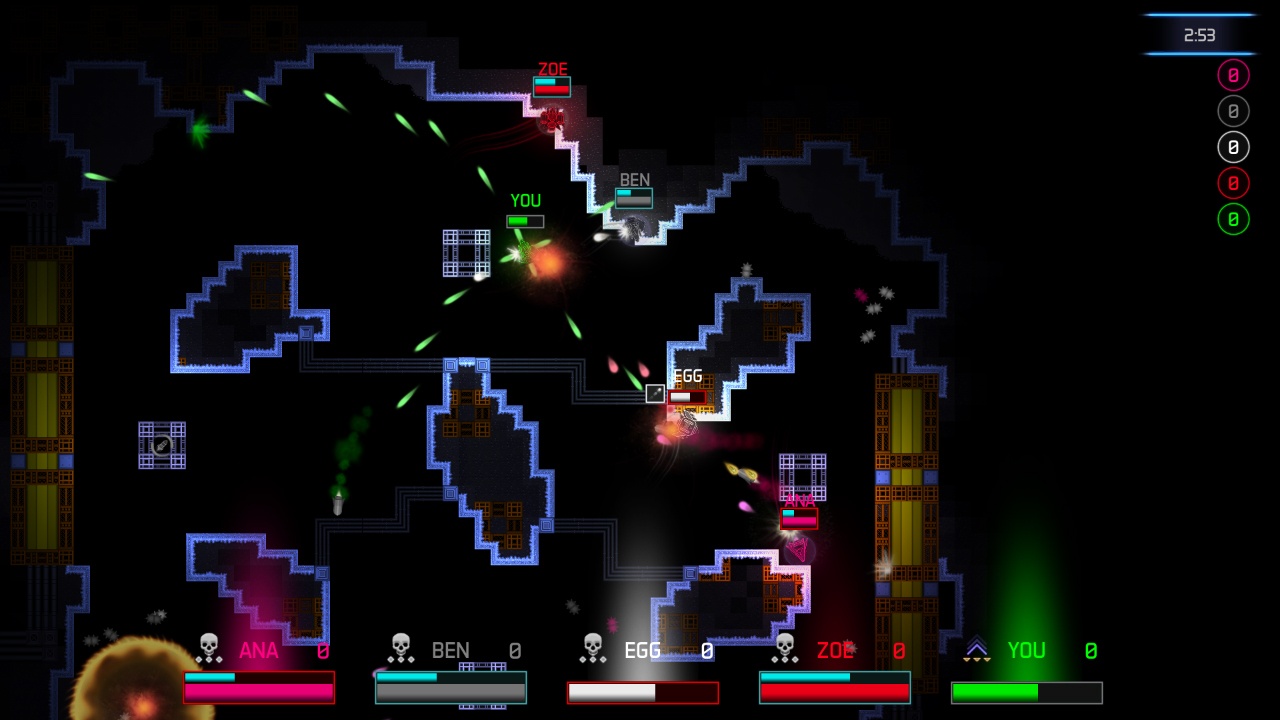 Once you get through the prologue that is little more than a tutorial with a bit of background peppered in, a player is able to get into the meat of Aperion Cyberstorm, which is a multi-roomed, multi-waved twin stick shooter. Though this may seem like well trod territory, it’s because, well, it sort of is. I don’t want to shoot the horse out the gate, but I didn’t feel, for a single second, there was a brand new, bleeding edge idea that was being brought to the world of gaming, and I need to go ahead and assure players that this isn’t a problem. If you’re a fan of the genre or at least heard good things, you’re going to be in good company immediately. The number of enemies that you encounter throughout the waves starts out manageable for only about the first level and very, very quickly gets into bananas territory. The difficulty of handling the waves comes down to three important factors: enemy type, visibility and firepower. Enemy typing is spot on: you start out with grunt ships that are basically flying fodder and soon end up with ships that have their own preset AI, homing missiles and a lot of gumption. They can throw up shields themselves to deal with attacks and, early on, you even get ships that heal themselves and heal others. There would be a serious imbalance and decry of “broken” if the firepower and powerups themselves didn’t help balance this out.

In terms of drops and tweaks, Cyberstorm does due diligence, even if it doesn’t seem that way at first. You get the three standard ships at the beginning (high strength, high defense, high speed and each is weaker elsewhere) and you can only equip two types of extra weapons that work on timed activation and timed cooldown.These can grow more powerful as you level up, and you find additional powerups that you can swap out and find what fits best. Seems simple, right? And the first two you have (rapid fire and spreadshot) aren’t really anything to write home about. But, once you start discovering the on-the-fly powerups that can appear, the game takes on a brand new dynamic. Suddenly you might be neck-deep in some really angry enemies, but there’ll be freeze auras that stop ships in their tracks if they’re in the radius. A brand new shotgun attachment might affix itself to your ship, giving a brief respite in the form of buckshot and mayhem. Shield and life re-charges are surprisingly plentiful, but not in a way that makes the game too easy. In fact, there are more than a few instances where, were it not for the plethora of drops, I would be dead in the water. So the game demands that you’re both agile in terms of shooting but also aware of your environment, making your way to the precious refreshers before you die from exposure (to bullets).

The third category, visibility, is where Aperion Cyberstorm really and truly falters. If an enemy wave spawns in your immediate vicinity (on top of you or next to you) you see them and the red halos they cast to indicate how many enemies are here. But, if they’re even slightly off screen, like maybe half a screen away, you won’t get a damn clue whatsoever. As a result, you’ll concentrate on dealing with the hell that’s right here and not be aware that three times as many enemies are slowly making their way over to you right now. This can really break your strategy in terms of when and where you decide to fire up your equipped powerups, because you may think you’re cleaning house when, in actuality, it’s just the foyer and the basement is a damn nightmare. There isn’t a lot to be said other than I wish you could see the spawn of enemies off camera through some kind of indicator. 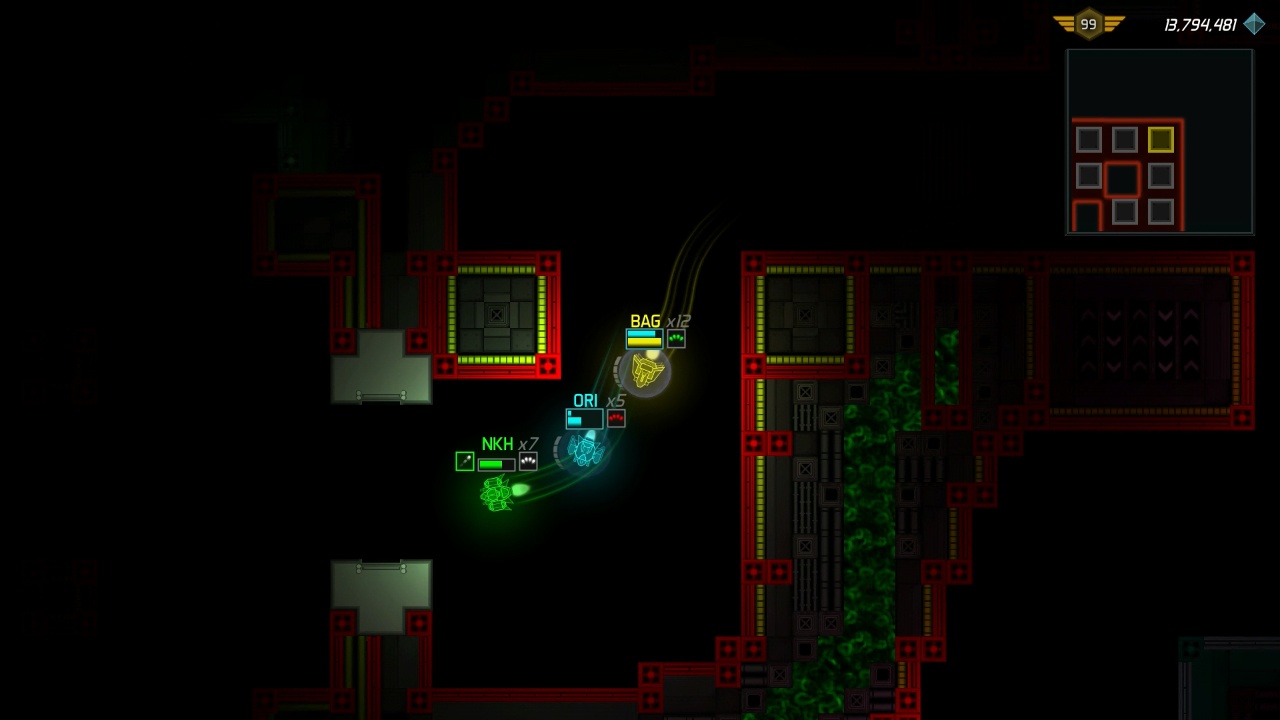 Besides campaign mode, Aperion Cyberstorm also offers some Versus and Onslaught (endless) modes that dedicated players should definitely give a try. Besides having a good break from the normal routine of flying forward and dealing with one room at a time of enemies, this is the best way to test out different types of unlockable ships and weapons. For better or worse, these two side modes come with everything automatically unlocked (since you don’t really need to level up when there’s no end in sight) and players can both find better ways to use the existing tech the have and get a sneak peek at what might be coming down the pipeline. Plus, if you don’t trust your friends in campaign mode, you can see how well they fly in these encapsulated methods, though I do highly recommend bringing at least one other player along on the campaign. The levels get really, really arduous in terms of enemy density and shooting precision, but having friend or three makes everything a bit easier to deal with.

Aperion Cyberstorm is a mouthful of a title, and, incidentally, might seem a little hard to swallow at first. An initial viewing of the game doesn’t offer a lot in terms of impressive ideas: twin stick shooter with co-op options, a bunch of powerups that don’t really do much in terms of changing the game, and some overly glitzy graphics that feel accentuated in the wrong direction with the techno/dubstep inspired soundtrack. But, if you can get around a lot of kneejerk reactions regarding the game’s initial appearance, you’ll find some pretty great times and gameplay within, especially with friends who share the same bullet hell interest, and it’ll be well worth your time and money.