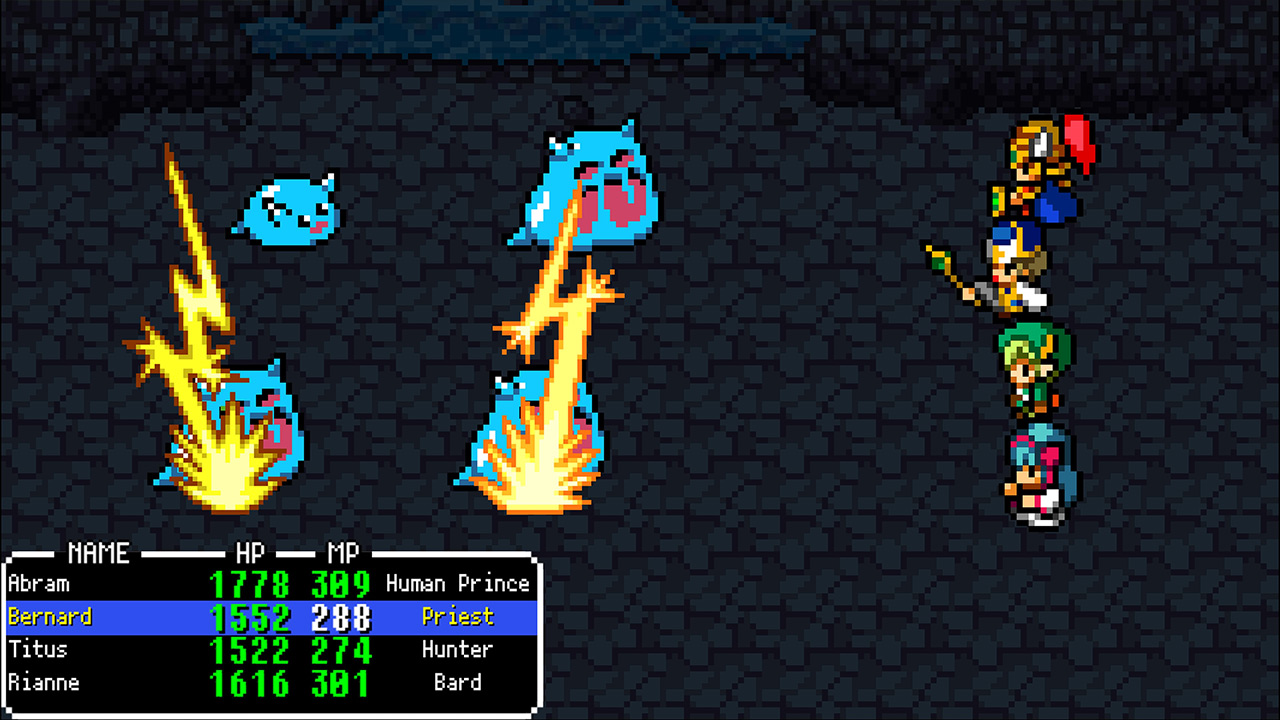 Fans of the RPG genre can no doubt pinpoint the exact title or franchise that they cut their teeth on. For most of us, those original roots are often a much older game from a bygone era of gaming – things like Shining Force on the SEGA Genesis, Final Fantasy on the Nintendo Entertainment System (NES), or something similarly dated. Dragon Sinker attempts to recreate those nostalgic roots in a new 8-bit world full of Fantasy tropes, quest chains, and turn-based combat. Released on February 6th, 2018, from KEMCO, Dragon Sinker has all the trim and trappings worthy of a Retro-inspired title, but can it compete with a plethora of other 8-bit RPG options?

The story premise of Dragon Sinker is, unfortunately, nothing novel or unique – another Fantasy world, complete with a big, bad dragon as its main villain, and a handful of hopeful heroes trying to save the day. But these tropes can feel familiar and charming, even if they’re not ground-breaking; for a title that’s trying to recreate the feeling of the original games in the genre, it fits. Plus, the dated graphics lend well to that package as well, and the soundtrack and sound effects blend in with the Retro look of the title. It’s all rather run-of-the-mill, but it’s passable; there’s nothing here so unique it’s worth writing home about, but it feels polished and familiar, and even more importantly it feels appropriate for the era and the style. 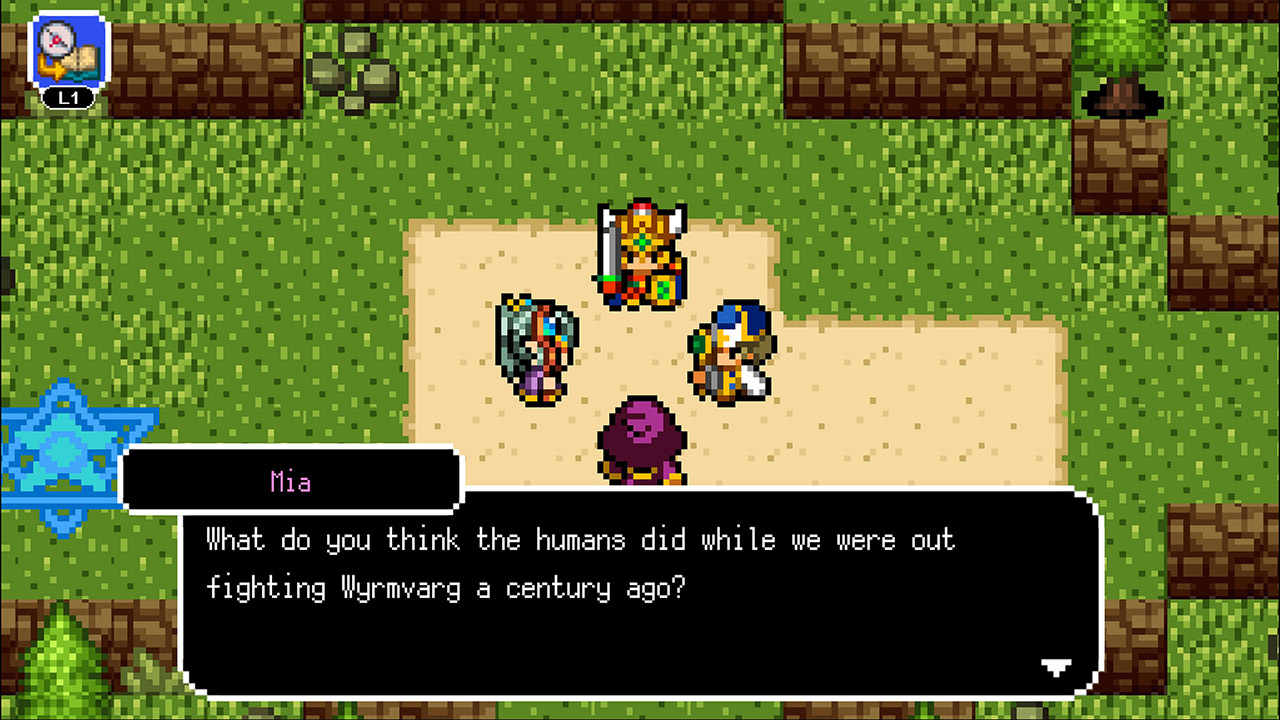 Dragon Sinker uses “jobs” instead of classes, and characters gain XP in both an overall “Level” and their job. These jobs are exactly what you’d expect – warriors, healers, even townsfolk that have taken up arms versus enemies. What disappointed me is that, unlike in games like Shining Force where you can build a roster that’s a large pool of customizable characters, Dragon Sinker limits you to four characters in a single “party.” Players have three party slots to choose from, and they can swap out these teams whenever they want to, but it still doesn’t have the large-scale roster I was hoping for. The combat is fairly simplistic, and again, exactly what you’d expect in an older RPG; each job has special abilities that unlock as you level up, and you can swap out armor, weapons, and special items for additional effects and abilities.

I seemed to scale out of outdoor/combat areas very quickly; it wasn’t long before the random encounters started to feel redundant and tedious rather than exciting or even challenging. It didn’t take me long to gain a considerable amount of XP and coin, but I also chose to play on Easy (out of four options) so that I could see more of the game more quickly. The interface and menu were cleaner and more attractive than I expected, and the controls on the PS4 were intuitive and versatile. I was glad to see a quick-button for healing my party members, plus a manual save I could employ at any time. 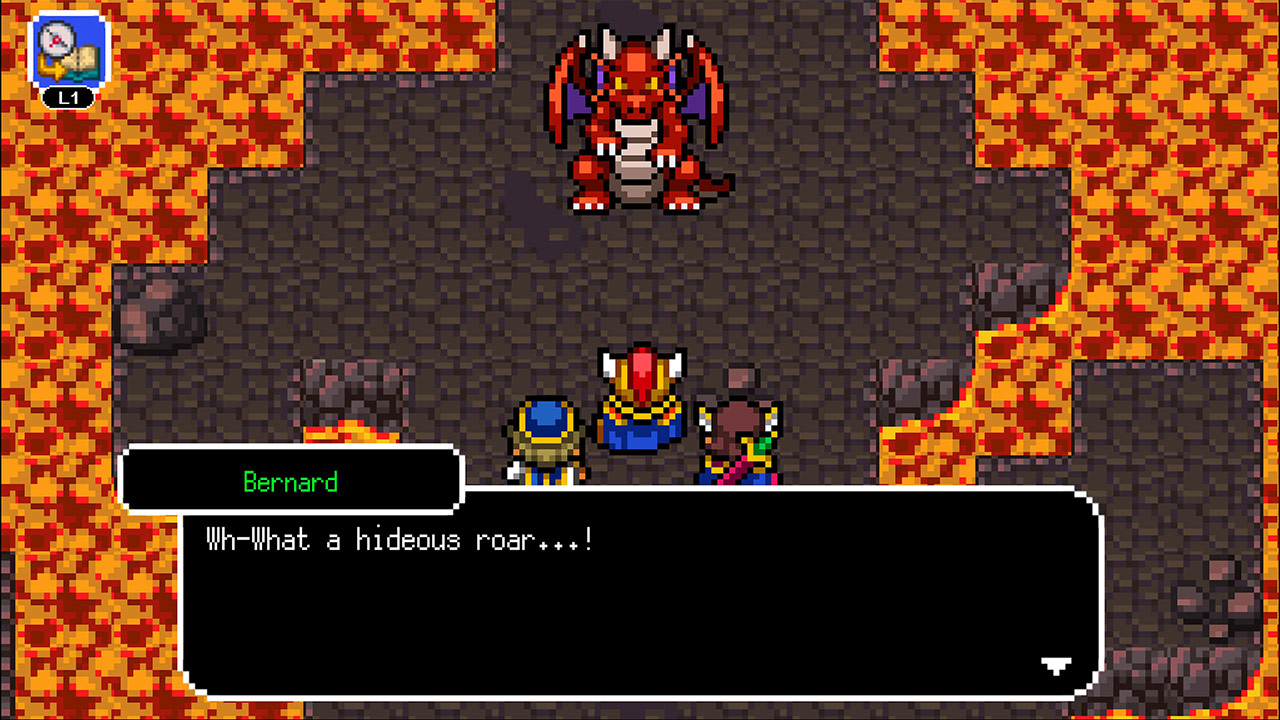 Dragon Sinker achieves what it sets out to do, recreating the original, 8-bit roots of the RPG genre. The turn-based combat, Fantasy themes, appearance, and sound all tie-in together to create an enjoyable, nostalgic experience. But I question if newcomers to the genre would find enough here to have them hooked, or if this is yet another game that relies too heavily on those familiar elements to sell itself as a viable way to spend a player’s time. The dialog and storylines are decent, but again, there’s nothing here to really make it a must-have addition to even a Retro-licious PS4 library of titles. Dragon Sinker doesn’t seem afraid to laugh at itself from time to time, and the overall polish is impressive, especially for a game converted from a mobile device app. But the experience grows tedious fairly quickly and falls into the same plot holes, traps, and redundancy that can plague the RPG genre.

Fans of Retro-style gaming can do far worse than Dragon Sinker, and it doesn’t carry a lofty price tag. Hardcore fans of the RPG genre who aren’t afraid of some 8-bit action and dated mechanics might also find something worth investing in here, but it’s difficult to recommend a title to an entire genre’s fan base without having a gripping storyline, revolutionary mechanics, or even something novel to carry with it. Dragon Sinker might be better left for a sale, although, currently, purchase of the PS4 version also carries a PS Vita copy as well, which could be a tipping point for those on the fence. Ultimately, Dragon Sinker is best for diehard fans hungry for some nostalgic, Retro memories, but other gamers might want to proceed with caution.