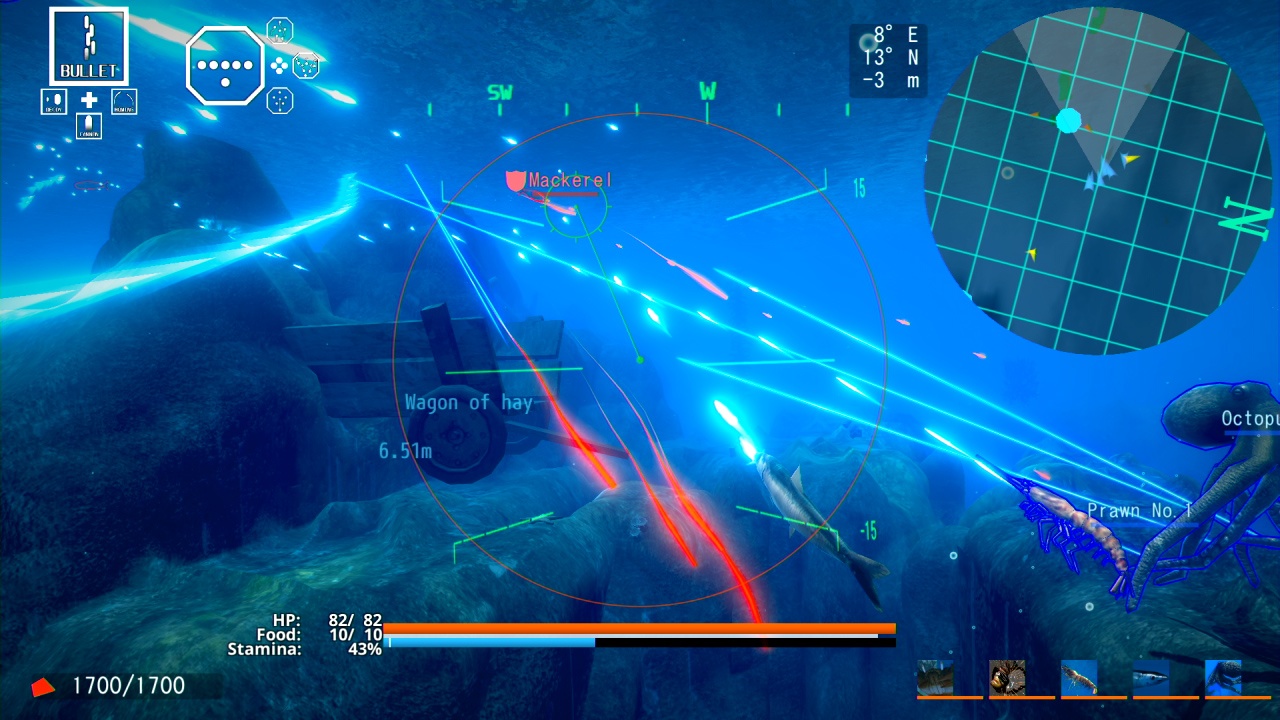 Ace of Seafood, developed and published by Nussoft, can only be described as a very different kettle of fish when it comes to the presentation and content values of a video game. If you want to see salmon shooting lasers, or crustaceans cranking up the heat, then this might just be a title that could be right up your street; or down in the depths of your ocean, whichever way you want to look at it. Set in the future, human beings no longer exist, however, the mind is still able to take control of other life forms which, in this case, happens to be armed fish. I know, just don’t ask!

It all sounds a bit daft, however, the general premise behind the game play is actually quite a clever one if you look deeper into the game’s mechanics. In a funny sort of way, it follows the natural order of the marine eco-system with a fight for supremacy, food and shelter. In what is basically a shoot-em-up, you take control of a species of marine life. Your starting selection consists of several varieties that range from sardines, which find their strength in numbers, to crabs that traverse the seabed like armoured tanks. After a brief tutorial, you’re then left to explore the vastness of the ocean in the search for reefs to provide shelter and more, but I’ll get to that shortly. As well as searching for reefs, you’ll also need to find food and DNA samples in order to create more life, again, I’ll get to that bit too. However, with any eco-system, there are other species of marine life that have bigger fish to fry; namely you. 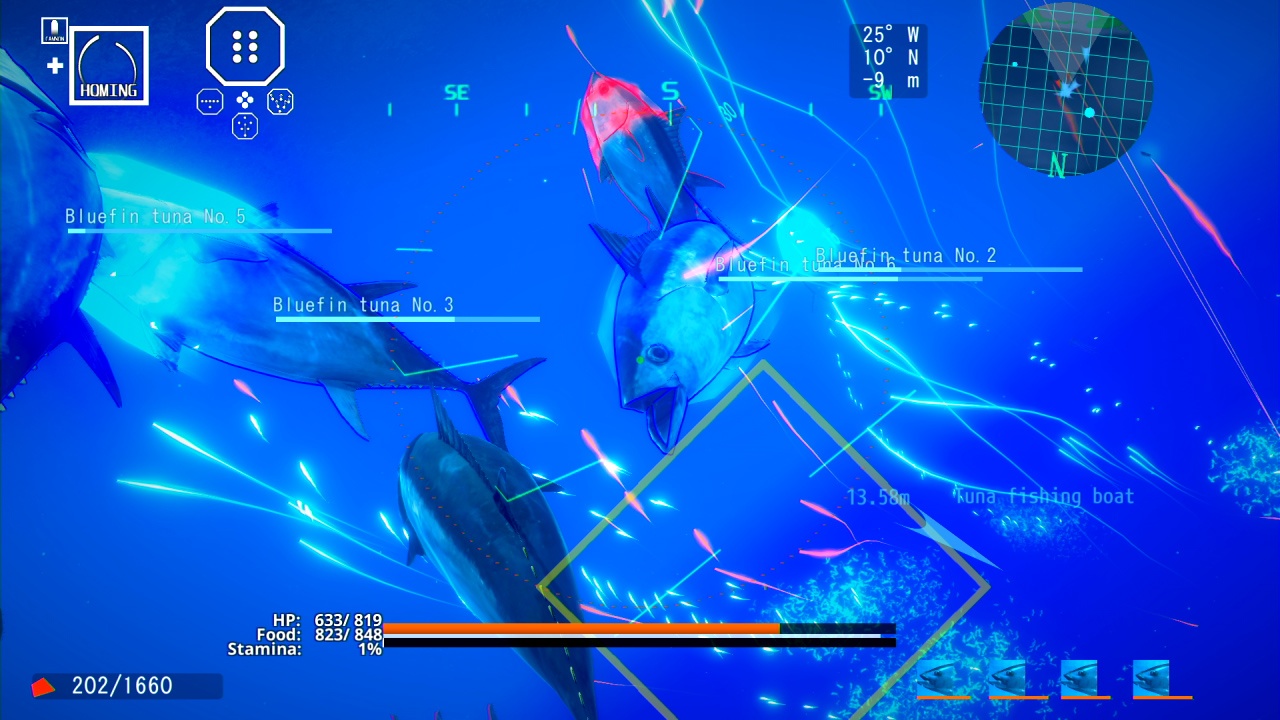 Brigades of Barracudas, schools of Salmon and a collection of crabs roam the oceans, or guard the reefs that they currently control, and they aren’t going to let you get away without a fight. In order to combat these other species, you have an array of armaments or techniques you can use in battle. From standard laser bolts to plasma shots, homing missiles and close quarter attacks, you can lock on to each of your foes as you release a barrage against them. You don’t stand alone either, as one or two others of your species swim, or crawl, with you as you fight to the death. Once victorious, you swim to fight another day or you can take over control of the reef that the enemy had in their possession.

The reefs play an important role in the progression of the game. When acquired, they offer you a respite from the dangers that lurk within the depths of the ocean. Not only do they recover your health and offer a save point, they also act as a hub in which you can develop DNA, breed and adjust your group, or school, of fellow fish fighters. Although a tutorial is given to you at the start of the game, it only covers basic movement and manoeuvres and, unfortunately, does not cover the functionality of your reefs; although it does label what each option entails. Without any meaningful instruction, the process with which you develop yourself is particularly hit-and-miss and, ultimately, gives the game a very steep learning curve. However, the basic functions allow you to breed in order to increase the size of your group, develop DNA with which to take control of new species and alter the standing of what fish travel with you. There is also an online component here, but its functionality wasn’t operating at the time of writing this review.

There is a tactical element to the gameplay, despite its main function being, primarily, a shooter. This isn’t really a run-and-gun game as you won’t last long against the other fish in the sea. You do need to be choosy with whom you fight and avoid any confrontation with any stronger species that may just be swimming around or guarding a reef. This is where the importance of the reef comes in with the development of your school. This, ultimately, requires you to swim around shooting starfish and barnacles, or any other small fry that litter the bed of the sea floor. These in turn reward you with food and DNA samples, as does defeating enemy fish, which can be used within the reefs. This can lead to a bit of a grind in order to reach a satisfactory level with which you can put up a decent fight. This collection of samples becomes an important element of the gameplay, allowing you to eventually develop and take control of seals, sharks and even a battleship or a submarine. Again, don’t ask! 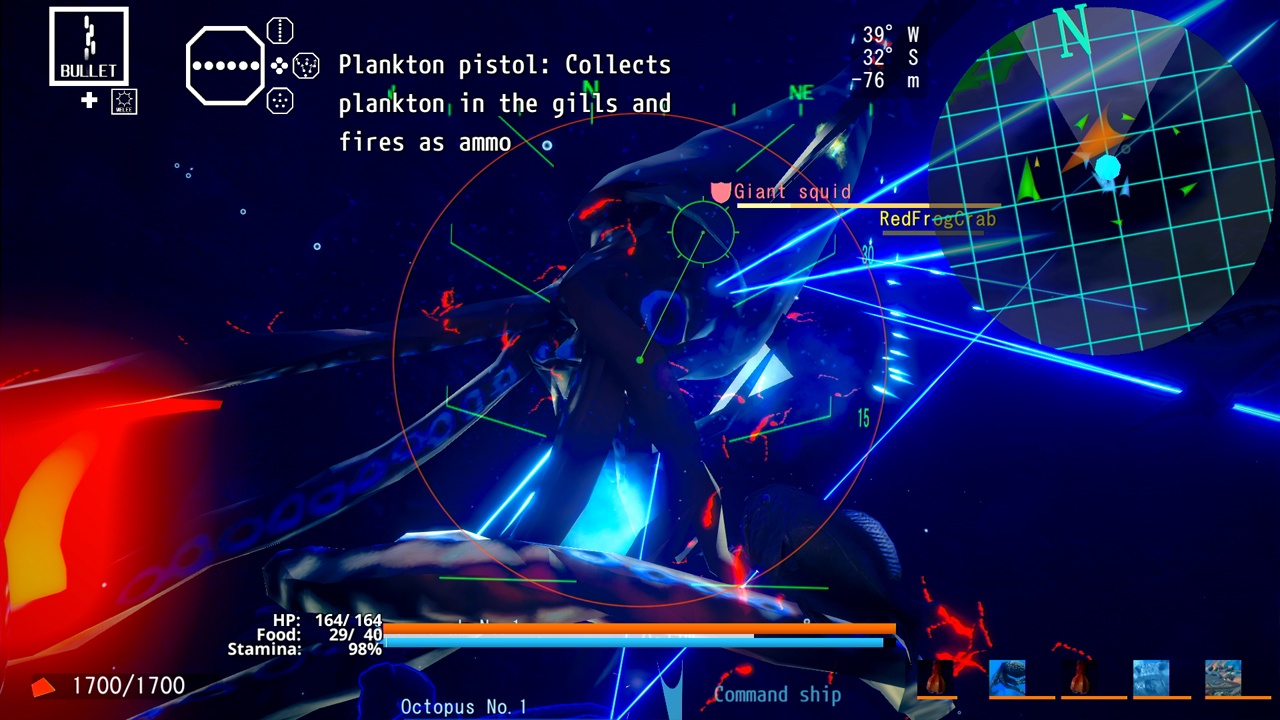 The premise around the mechanics of the game is rather clever, with its evolution in a survival of the fittest, and is actually really good fun to play despite its crazy sounding setup and lacklustre instructions. Graphically, it’s quite impressive with a marine setting that certainly looks the part. It can be a little murky and bland but then the ocean isn’t always exactly crystal clear. Shooting the ocean floor can transform its appearance with destructible environments, which is nice, and there are plenty of nooks and crannies that you can swim through and explore. However, some of the animations can be a little bit jerky, as can some of the controls. Although the touchscreen can be utilized for menu selections, the left thumb stick is redundant in this capacity; instead opting for the arrow buttons in option selection. It feels strange and unnatural but, ultimately, isn’t really a game breaker. The music feels a little odd too with its electro-techno soundtrack. They all sound good enough, but I felt that they didn’t really match the mood of the game, unless you’re caught in the middle of a fight but there’s so much action going on on-screen that you barely notice it anyway.

Overall, there is a neat little game in Ace of Seafood. The exploration of the ocean is good fun, as is learning the ecosystem of what marine life you are capable of taking on. The various fights can be exciting at times, although the game does offer a very difficult challenge and the on-screen action can be a little messy. However, once you have figured out the mechanics of the gameplay and can survive longer than ten seconds against the other species of fish, then the game really does come to life with some enthralling, and often loony, encounters. There’s certainly a lot of game time on offer here, although the majority of it can be spent grinding at first, but the rewards are worth it in the end. If you’re looking for a game that is different from the norm, then Ace of Seafood is definitely worth a look as some of its elements are really good fun, however, just be prepared for some of its core gameplay mechanics to leave a distinctly, fishy taste in your mouth.

Ace of Seafood can only be described as a very different kettle of fish. Does it give you school of thought, or is it all just a bit fishy?