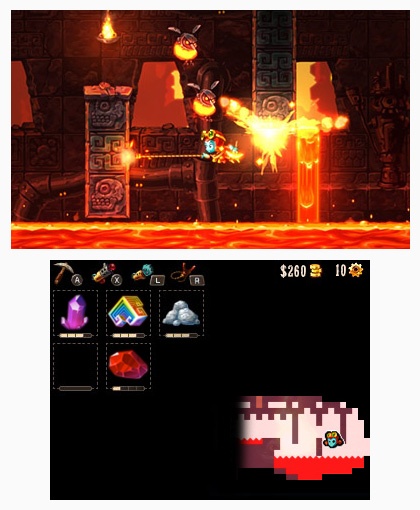 Of all the franchises out there, this one still feels like the least likely. A steampunk world filled with cowboy robots tied together more by tone than anything else, SteamWorld is, well, it’s a bit of an odd one. Rather than stick to a clearly defined path, the SteamWord series is already home to a largely forgotten tower defense game for the DS and a highly enjoyable turn-based strategy game in the form of the somewhat underrated, SteamWorld Heist. Even the main game in the series, and I’m calling it the ‘main game’ based purely on the fact that it has spawned the series’ first official sequel, SteamWorld Dig manages to deliver a bizarre concoction of a game that successfully combines the core attributes of Metroid, Minecraft, Dig Dug and Boulder Dash.

While the sequel, the aptly named, SteamWorld Dig 2 doesn’t veer too far from the formula established in the original, it, like any sequel worth its salt, manages to improve upon its forbearer in just about every conceivable way. Gone are the procedurally generated levels (something that I’ve never been the biggest fan of) in favour of carefully crafted and often ingeniously designed stages, the visuals are much improved and the gameplay, while fundamentally similar, delivers a more nuanced experienced with more refined mechanics and a greater array of gameplay styles. 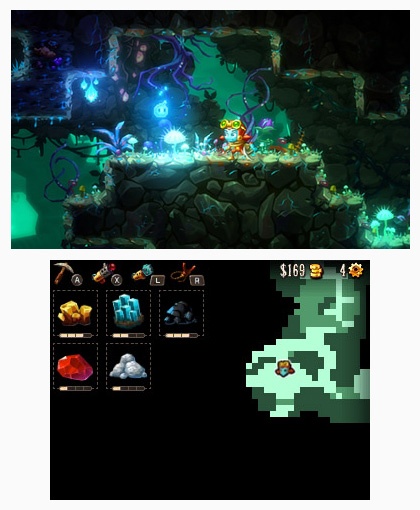 You still spend most of your time digging of course, and like the first game, the story and characters aren’t all that interesting, but it’s that loop of digging deeper, collecting materials, buying new gear and upgrading your existing tools that make it all so compelling. This has all been done before of course, and SteamWorld Dig 2 never quite escapes the shadow cast by its inspirations, but everything here is so slick and well-designed that you’re unlikely to care.

Playing as the strong-willed robot, Dorothy in search of the first games’ protagonist who has, well, you’ll know if you finished the first game. Either way, he’s missing and presumed gone forever, but plucky Dorothy has other ideas, and during this extended adventure (perhaps as much as twice the length of the first game), you’ll experience a surprisingly varied selection of locations, ones that manage to imbue a game that is largely set underground with a huge amount of personality. And honestly, that’s one of the games’ greatest strengths. Beyond being a slick and enjoyable adventure, SteamWorld Dig 2 delivers a visually rich world that, while narratively shallow, proves rich in artistic design and imagination.

As great as much of this game is though, be warned; like the first game, the start of SteamWorld Dig 2 feels unnecessarily slow. It’s fantastic once it gets going, but for one reason or another, the first hour feels a tad cumbersome. Saying that, once you get past that first hour and into the swing of upgrading your equipment and improving Dorothy’s core abilities, the experience soon falls into an addictive and hugely enjoyable loop that is helped no end by this games’ deliberate level design and carefully paced upgrade system. 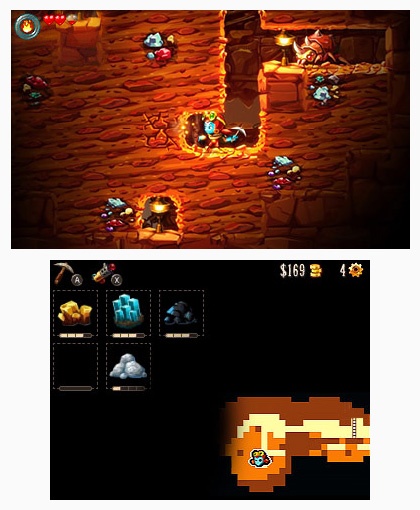 With a decent selection of enemies, some surprisingly clever AI and a small but welcome collection of boss battles, SteamWorld Dig 2 does a great job of keeping the experienced varied beyond the simple (but admittedly hugely addictive) process of upgrading and buying new equipment so that you can access previously locked off areas. Again, it’s nothing you haven’t seen before, but this combination of Metroidvania-style gameplay with Dig Dug-esque mechanics makes for a fantastic combination, one that is even more successfully and carefully crafted second time around.

The SteamWorld franchise remains a somewhat bizarre success story. Propelled by the quality of each game rather than any overt sense of name recognition, SteamWorld Dig 2 arguably represents the high point of the series to date and a genuinely fantastic game in its own right. Nothing here is especially new, but every aspect of the games’ design has been perfectly polished to create a visually impressive and consistently addictive adventure, one that, in many respects, manages to out Metroid Metroid.