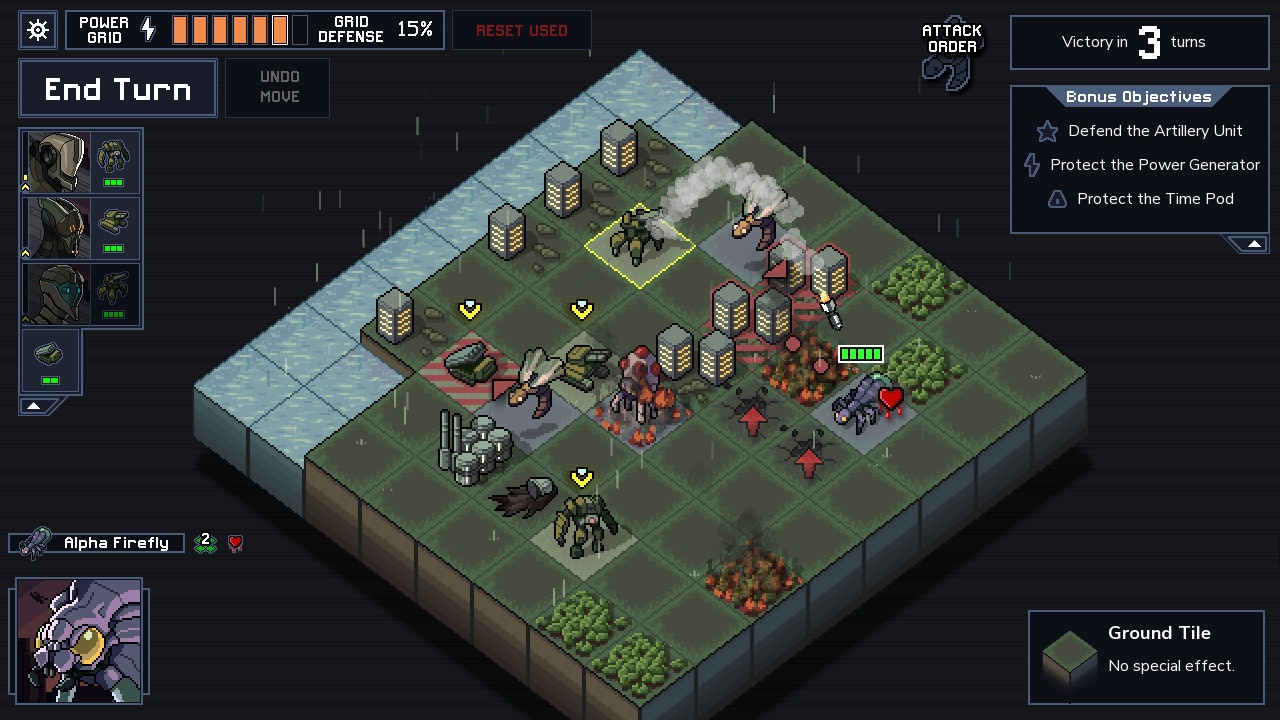 The mech team is in position. Each second that ticks by causes more bugs to emerge from their sinkholes. The human colony is relying on you to make the right decisions to end this battle. One wrong move and it could cost human lives, as well as getting too familiar with traveling back in time. However, if you maneuver your team correctly, many bugs will be squashed and humanity will praise you for your bravery.

Into the Breach is a tactical, turn-based strategy game that pays homage to excellent games such as Final Fantasy Tactics, Advance Wars, and Front Mission. In addition to the game’s influences, it effortlessly combines an immersive RPG system to turn the tide of battle and uses time travel as an interesting way to use your failure as a weapon against the Vek.

The game begins with a straight forward plot. Something happened and now giant bugs are emerging from sinkholes. These giant bugs, called the Vek , fight ruthlessly to eradicate all of humanity and the surrounding colonies. The only thing that stands between humanity and the Vek are your tenacious, but sometimes crafty mech squadron.

Gameplay elements that comprise this game are based on a couple of things. The first core value this game explores is combat. The area you are deployed to on missions is an 8×8 square. You deploy your mech squad in a starting area, and then the enemy pops up next. What’s especially interesting is the game relays to you exactly what move the enemy is about to make. This will allow you some time to plan a response that is effective, but precise enough to prevent damage to your colony or specific powered buildings. In addition to the 8×8 grid, elements of nature as well as other mission based elements, such as airstrikes, can help grant an advantage against the overwhelming numbers the Vek rank superior in. 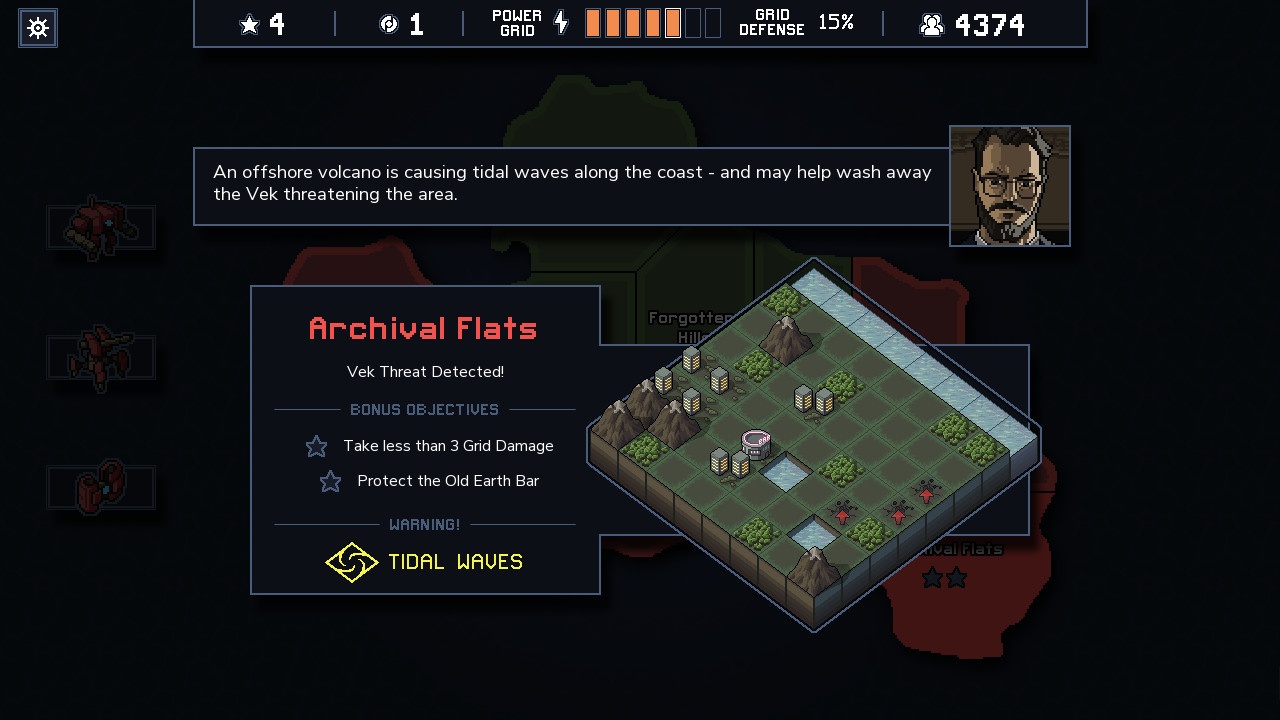 The next core value in this game is pilots. Pilots command your mech squadron and even have special abilities. As your pilot scores kills in combat, it gains experience, unlocking new abilities. One pilot I played as had the ability to be immune to webbing attacks. Another pilot I played as had the hovering ability, which allowed it to pass over water successfully.  Unfortunately, if you lose a pilot in battle, they are gone forever unless you choose to reload a game and try again. Achievements you score in-game lead to you allowing you to buy new squads to use on different missions. I was disappointed to find out once you pick your squad, you’re locked in for that play through. I respect the developer’s decision to do this because it forces the player to compensate for one specific strategy of the mech squadron and draw from their strengths.

The next core values that are paired together are reputation and power cores. You receive reputation by successfully liberating an island from the Vek infestation. You can use this reputation to purchase optional upgrades to your squad, making the battlefield even to the ever evolving enemy of Vek. An example of an upgrade you could buy with reputation is the ability to move your mech again after it is done attacking an enemy. Combined with the right tactics and used in cohesion with the mech squad, it can be a powerful bonus to turn the tide of war.

Lastly, the different squads of mechs. Each mech squad has different special abilities. You unlock these squads with reputation points accumulated from successful missions. It adds to the replayability to the overall game and gives you more opportunity to try different play styles when combating the Vek.

This game is challenging. I ended up having to reload (or go back in time) several times to figure out what I could do better. What’s also interesting is you’re allowed 1 turn reset per game. This allows you to undo a move you didn’t want to make or try something else to optimize your results. Though I died a lot and my patience wore thin, I found myself going back to fight the Vek. When you plan your moves correctly and cause the enemy to attack itself, it’s a beautiful harmony of destruction. 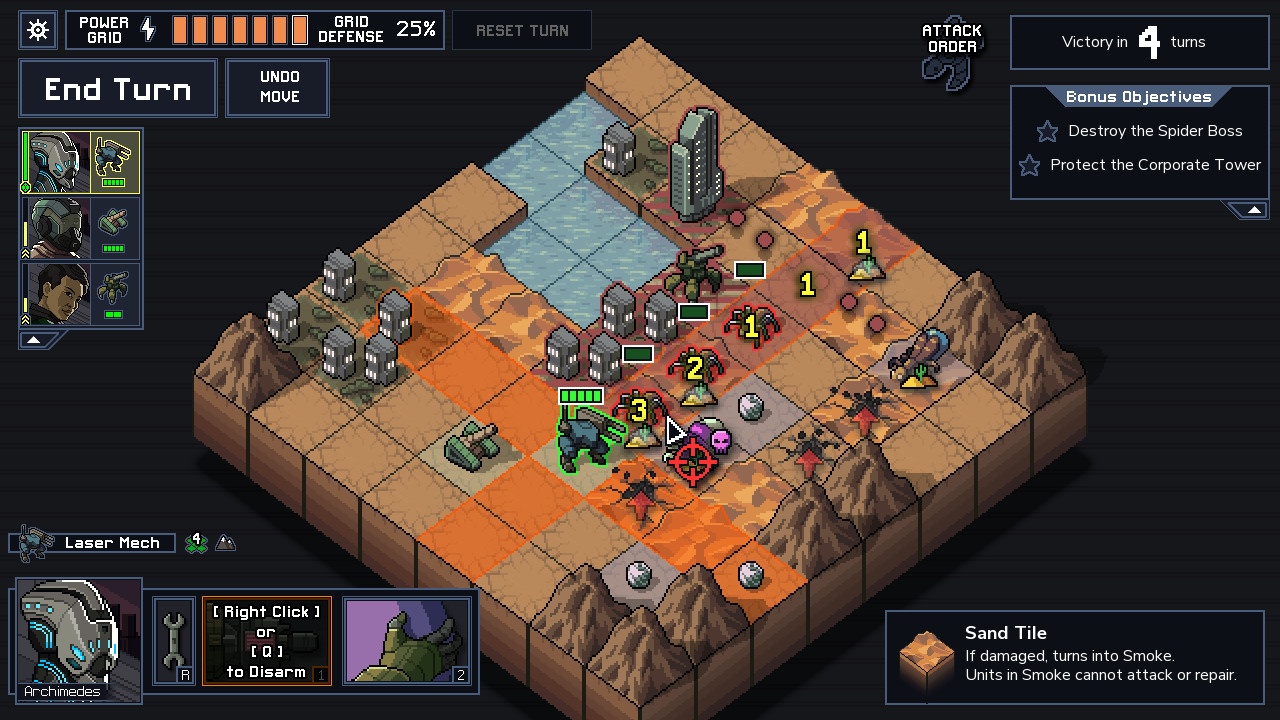 What I found that prevented Into the Breach from perfection was a couple of things. The gameplay can be repetitive, but it is the main way to level up. If you don’t catch on early in the combat system, the Vek are relentless and destroy everything. I had reached several situations where I had to choose between taking human losses or save a vital power plant for future missions. There was always a drawback for saving one vital mission asset vs. the other one.

Though the graphics have that pixel art charm, it is simplistic.I personally took an immediate liking to the direction Subset wanted to go with this game, but felt like there was more they could have developed on each mech squadron design.

I recommend buying this game if you want a challenging, but solid turn-based strategy game. Into the Breach’s game play alone is enough to warrant multiple play-throughs. It isn’t a graphics-heavy game, so any general setup on the computer should be able to support this.

If buying this game isn’t an option for you right now, I’d recommend adding it to your wish list. Subset Games are running a promotion that if you buy Into the Breach, you get their first game, Faster Than Light, for free. Not a bad way to introduce yourself to the vision of this game company.