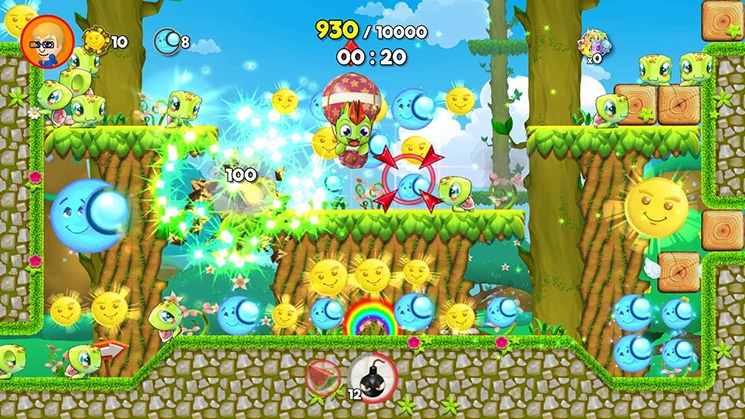 It’s time to pop your head out of your shells as Turtle Pop: Journey to Freedom, developed by Zengami and published by Digipen Game Studios, hits the Nintendo Switch as an exclusive title to the system.

At first glance, it’s easy to assume that this game is just your normal run-of-the mill puzzle-platformer. Don’t be fooled though, as this really isn’t your average game and, upon playing, you will soon realise that there is a lot more depth hidden away within its shell.

Set across seven game worlds and incorporating over one hundred levels, you are tasked with rescuing Bebo, Deephi, Slimmie, Smarts, Willis and Sparky; a group of turtles who have become lost within the various lands that comprise the game. At its heart, Turtle Pop contains the same mold normally associated with the platforming genre; by jumping over and across various platforms, you traverse the terrain towards an exit of kinds that completes the level. However, the developers have added several elements to the gameplay that creates a whole new style to the genre which sees you undertaking multi-character control, turtle linking, environment manipulation, item deployment and a whole host of collectibles that are an absolute joy in acquiring.

The first thing that strikes you when you first load up the game, is just how crisp and colourful the presentation values of this title are. With a stunning 1080p docked and 720p in handheld, with both running at 60fps, Turtle Pop contains an aesthetic, cutesy charm that is extremely pleasing to look at. With a fun soundtrack that matches the feel and look of the game, its production values are very high indeed. 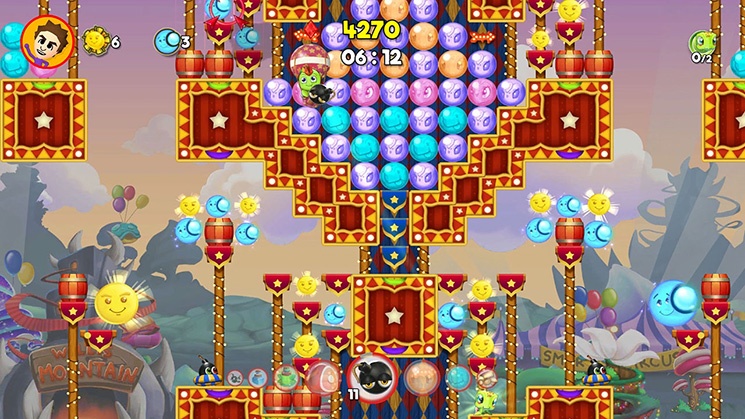 The aim of the game is to find a set number of turtles per level, each level containing a variety in the number of turtles to be found, and guide them to the rainbow that acts as an exit. Some of the turtles can be found wandering around whilst others can be hidden within the environment and an on-screen marker points you in the direction of their freedom. All this needs to be done within the restrictions of a time limit. It is upon finding each of your friends that the gameplay changes dramatically, as you need to guide each of the turtles towards the exit. With a quick flick of right shoulder button, you can alternate between control of the various turtles; guiding them one at a time across the obstacles that stand in your way. However, holding down the ZR trigger creates a radius of some sort of telepathic ability which sees you guiding your collection of turtles as a whole. How you decide to best utilise these abilities is down to you and can often make the difference between success and failure.

Using the A button to jump, each level offers a devilish challenge in completing its various environments. As well as the usual platforms to traverse, there are further elements that can also hamper your progress. Wooden blocks, green slime and hopping bombs can all block your path. Although each of the levels contain several routes that you can take, these obstacles will always play a big part in how you achieve success. Using Genie, an airborne support turtle, you can deploy items to aid you in your quest, from watermelons which revive and grant performance enhancers to your turtles, to bombs that help to clear your path.

As well as the normal platforming mechanics of getting from A to B, each level also contains a number of collectibles from sun coins, moon pearls and secret treasure chests. Completing each level also rewards you with extra collectibles and chests too. Contained within, a variety of cards can be found which adds a form of upgrading over forty different abilities. Farmhouses can harvest extra watermelons and bomb factories create extra bombs, as well as many more. There are over fifteen varieties, and three different rarity levels, which can be collected and each card can also be upgraded with extra cards, coins and pearls to further boost their production values. There is also the option to purchase cards, from a choice of three, and the content of these cards changes on a daily basis. There’s a very addicting quality to collecting these cards which promotes a need to play further within the game. 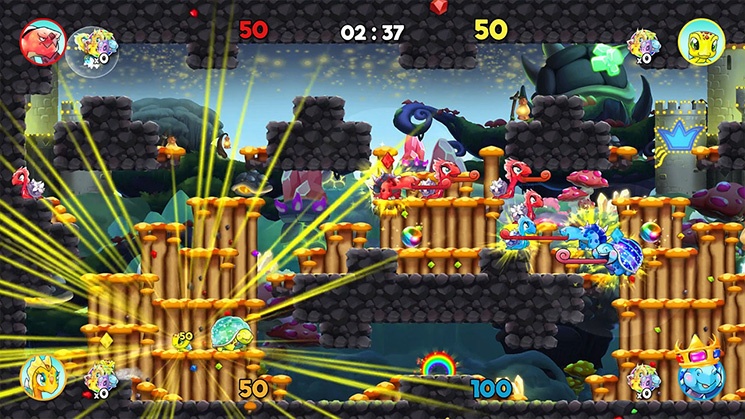 At the end of each level, you are also presented with a bonus round. These require you to guide further turtles into the exit within a twenty-second time limit. These extra turtles usually appear around the vicinity of the exit and the more you rescue, the higher the multiplier they award with extra coins, moons and experience points.

With so many different elements comprising the gameplay of Turtle Pop, it’s easy to assume that everything can be a bit overwhelming. However, it’s all been given a certain place and function and utilizing all the different components is absolute child’s play; further enhancing the enjoyment that can be found within this title. On top of all of this, the game also boasts a two-player co-operative mode, in which the whole campaign can be played, as well as a local multiplayer element for up to four players. This takes the format of various mini-games such as Arena Battle Crown Thief and Arena Battle Lick ‘em up, which pits you and your friends in a competition of wearing a crown for the longest period or by licking, colouring and freeing the most turtles in achieving victory. There’s also the Turtle Clash mode in which you battle your friends within a split screen in over seventy-five levels that are unlocked as you progress through the campaign mode. Each of these games are a blast to play and can offer many hours of fun, multiplayer mayhem.

It’s very rare to find an indie title that offers so much content that it will simply have you playing for hours on end. The overall presentation of Turtle Pop has a very cutesy charm to it that will appeal to an audience of young and old. With its focus on puzzling, including some levels that contain the formula of the match-3 mechanics, and its ethos of acquiring various collections, the game has a very endearing and addictive quality to it. Whenever you play, you are sure to find surprises within its content and gameplay functionalities. If I have any gripes with the game, then it’s the inclusion of the slight-slide mechanic when you come to a stop. It’s only a personal gripe and although it can add to the challenge, I feel that it also takes away some of the accuracy needed in a game like this, but it in no way detracts from the whole experience that this title has to offer. Overall, this is a game that is highly recommended and I’m sure will have you turtle-y surprised and glad that you shell-ed out for it.