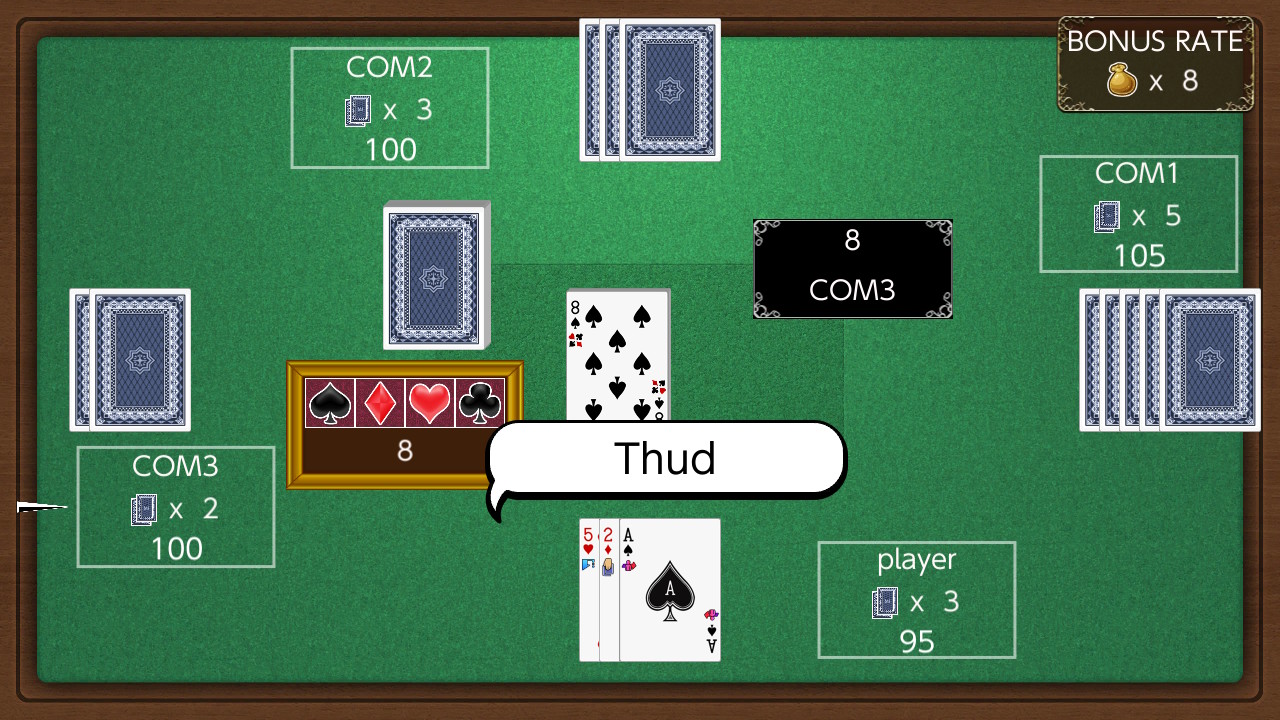 Poisoft is already becoming a bit of an infamous name despite not having published that many titles in the West. The name of the company alone is a bit of a pun, sounding like “poison” which maybe sounds cool for Japanese ears, but already puts me on edge in terms of gaming. Then, their only title currently on the English eShop is Vroom in the Night Sky, which nearly every reviewer has agreed is pretty much terrible. Now, they’ve brought a card game called Thud to Nintendo fans, and, I have to say, this is not a good trend in terms of their titles.

Thud already has a couple of strikes against it: firstly, it’s a card game ported to the Switch that doesn’t have a unique gimmick or presence from the beginning. There are a ton of collectible card games that I would love see come to the Switch (Ascension, Card City Nights, even Cthulhu Realms) which could hold their own in terms of presentation and uniqueness. However, this is a simple, 52-card based game, which means I could easily play it with a deck of cards at home. Secondly, Thud is the name of a board game that was created in the Discworld universe, and already has a pretty solid following with its real-life interpretation that’s been published. So you have a name that doesn’t evoke what you’re looking for, combined with something that could be played in a simpler fashion. Not great. 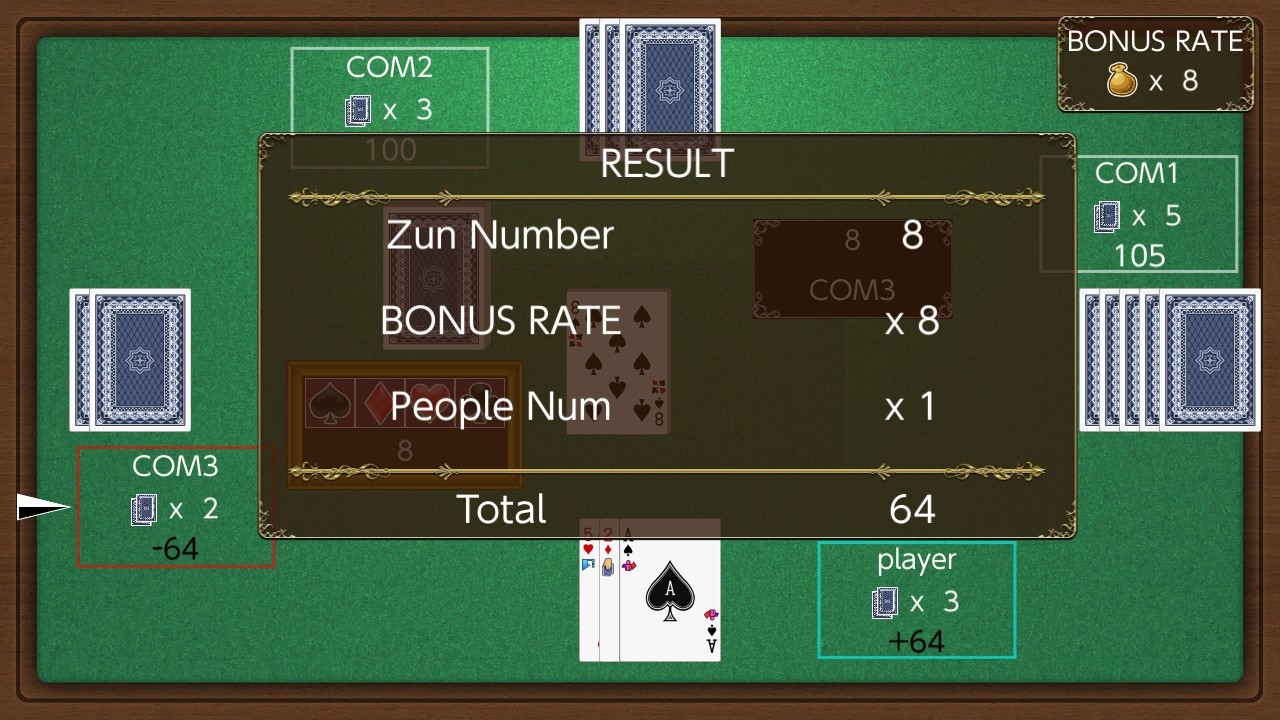 Secondly, as a card game, Thud is ridiculously confusing. There is a tutorial that, sadly, is a bit broken in terms of translated explanation, but we gotta give a pass to that because explaining a game in another language is always tricky. From what I can tell, you’re supposed to win when the cards in your hand are a numerical match to the card that’s displayed in the discard pile. So, if you have a six and a two, and the discarded card is an eight, you win. Maybe. There’s also the play of Thud, which is when you have two or more cards that are the same number AND the discarded card is that same number. So, hold three threes, and the discard is a three, and boom, you Thud, you win. But then there’s also rules about the number 2 being a draw two, but only sometimes. And the Joker acts as a wild card, but you can also use an eight to eliminate some suits from being discarded. It’s really strange: I watched the fifteen panel explanation a few times (and let the animations play to explain how to do it) but it still never clicked for me.

From what I can tell, Thud is a combination of Uno and Crazy Eights, with the former being relevant in terms of matching and the latter being relevant for how to win. But Thud also utilizes Uno rules that are popular in Japan (my students taught me to play when I used to be a teacher). So if you have two or more of the same number (and you’re not able to Thud) you can play them all at once. Or, if someone plays a Draw Two, you can add to the Draw Two and compound it for growing punishment to the next player. So it does get a little wacky and wild, but that should be alright as long as you can get a grip on the game. For new players, adjusting the difficulty down on the CPU is the right approach. Or it would be, if that were an option.

Thud breaks the cardinal rule of traditional games by not having any kind of difficulty meter for the three other CPU players that are needed in order to get a hand going. As a result, you’re dropped into a room, on a bland table, with three AI players who definitely know what they’re doing and you, who, presumably, do not. The result is losing. A lot. There was even a hand where the CPU won before it got to my turn because they drew a lucky Thud. Realistic, maybe. Fun? Not a chance. There’s not even an option to maybe turn on a different deck of cards or some colorful tables, which is the least we got from the PHYSICAL CONTACT series. 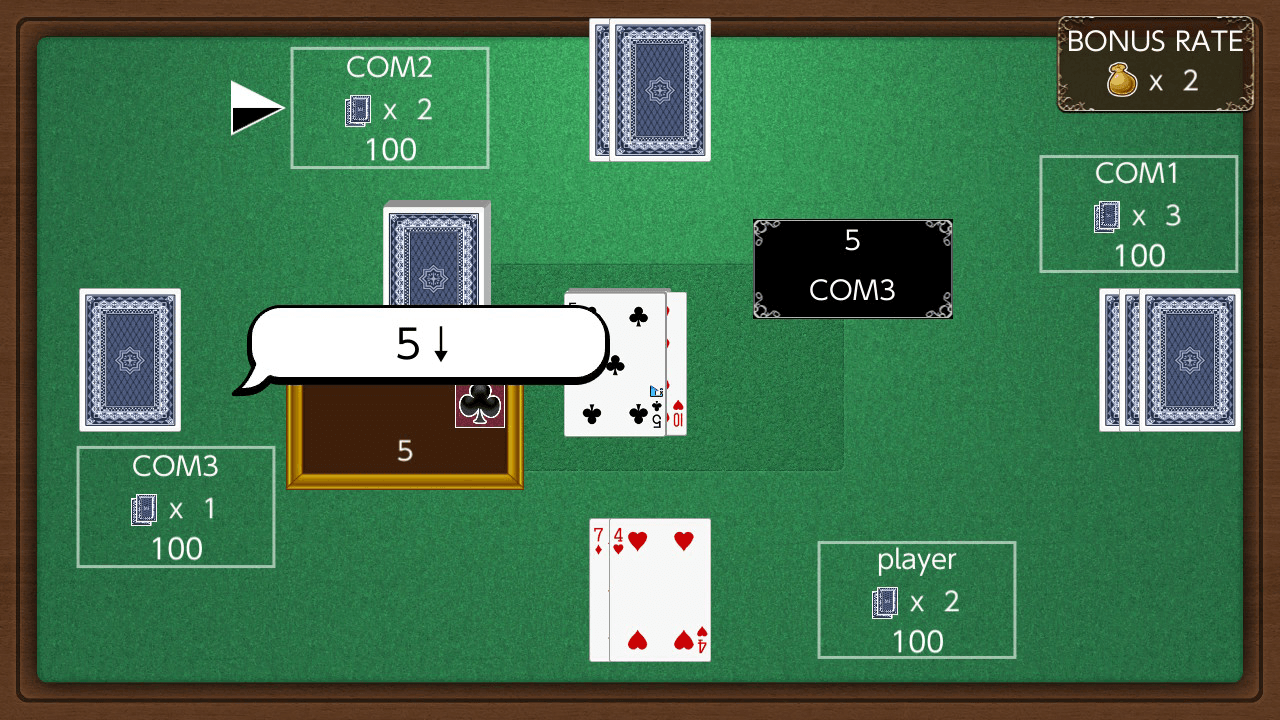 And, as a result of how the game is played, it’s impossible to get a local game going without three other players who also own Switches. Hint: the Nintendo Switch isn’t as scarce as it used to be, but it’s still far, far from the everyman device that the DS and 3DS became. So you’re forced to seek out the Internet to try and connect to other players who might be interested in an online game. I found none. I can’t say that I blame them: Thud doesn’t do a ton to attract attention, interest or otherwise generate sales. The best I can say is that the touch screen options are nice, the game runs smoothly enough and the displayed “version 1.0” in the bottom right corner gives me hope that there might be an update in the future.

Thud doesn’t do much to entice a player into playing, and does even less to keep them there once you’ve given into curiosity. As much as I hate to say this, there’s very little redeeming the title other than it’s a card game that I personally haven’t played before, so maybe I’m doing it wrong. If you really want to try your hand at Thud, be my guest, but I can honestly say I don’t recommend it.