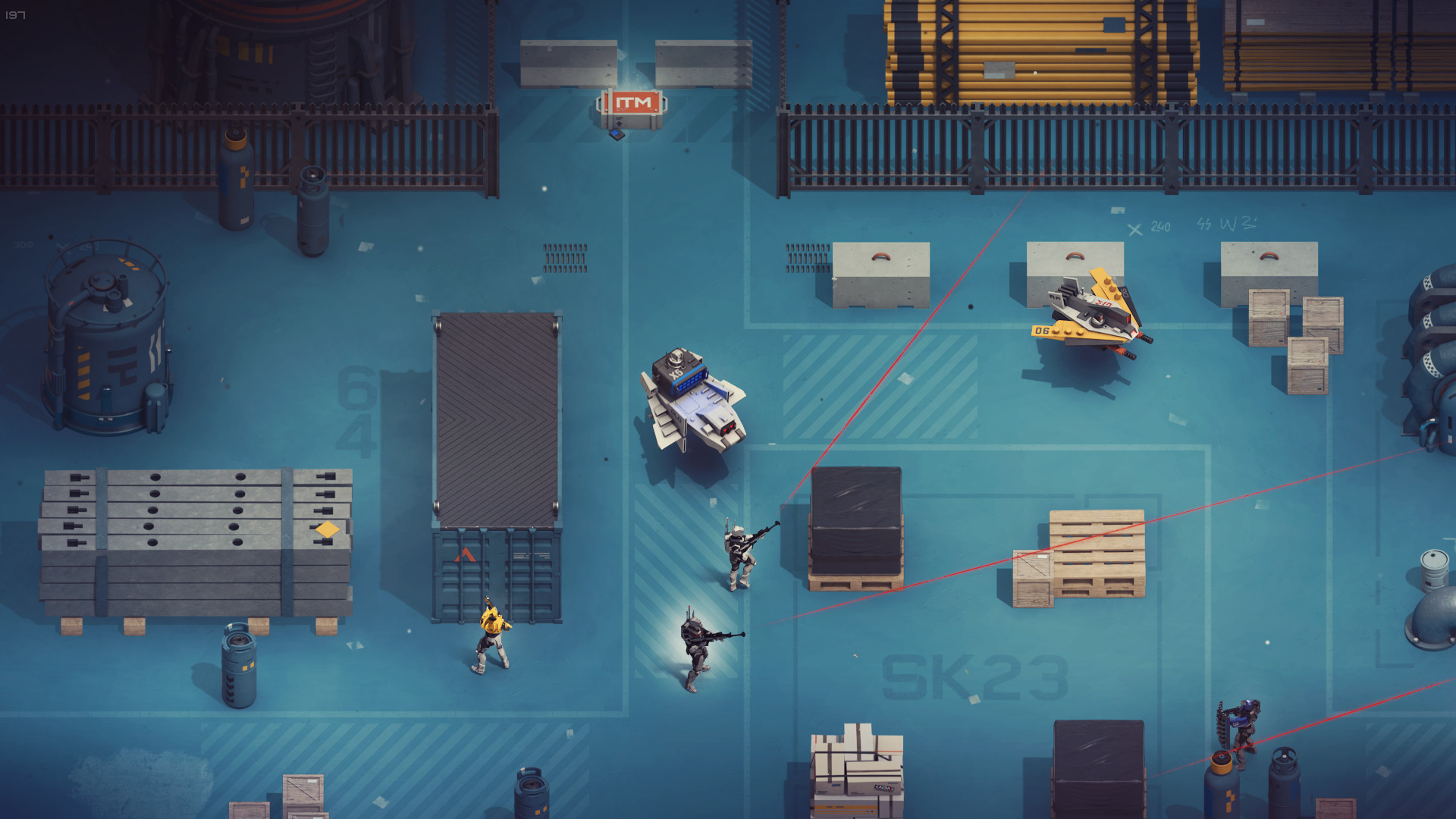 Synthetik is a game that I really didn’t see coming, I didn’t see any marketing campaign for it, or anyone covering it on news sites, Youtube, or even Twitch, so I wasn’t really sure what to expect besides what the game’s description on Steam promised. With that said, as soon as I started playing it I knew it was going to be quite the treat. My hopes are only that it gets the exposure it deserves and that, hopefully, it won’t go under most people’s radars.

This is a game that will only really appeal to two types of people, those that like top-down twin-stick shooters, and those that are into rogue-lites. Synthetik combines both these genres into a very compelling and extremely enjoyable package and offers quite plenty of content to keep you engaged for quite a good amount of hours.

First and foremost, this is a game that fully supports two players via online co-op, so you can always bring up a friend, or someone who you meet in the in-game chat, along for the ride. Still, this isn’t one of those games that, if played solo, won’t provide as much enjoyment as if you were to play it with someone else, as the game has seemingly balanced things out.

If story, narrative, and character development is something you’re looking for, this clearly isn’t the right place, even though the game seems to introduce a little bit of context at the very beginning. This is one of those games where it’s all about the shooting and constant progression. The game offers plenty in terms of persistent progression and different ways to play. There are four different classes that you can choose from, and they’re not really alike. While the Rogue focuses on stealth, the Guardian offers more options if you like to get up close and personal, while the Commando centers on overall ranged fighting, and the Specialist leans more towards elemental damage. 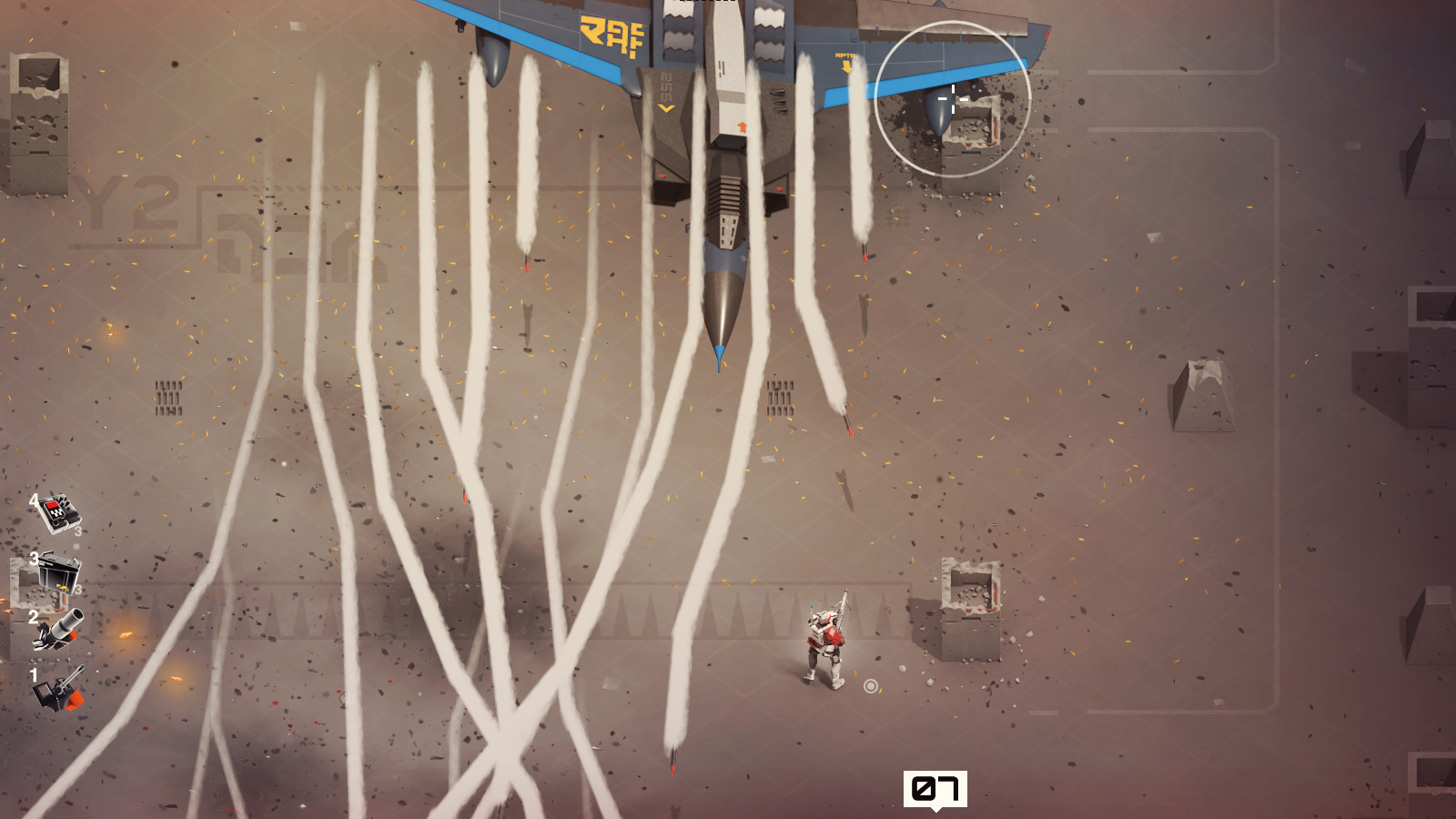 These classes come with their own set of perks, starting items, and passive bonuses, which you’ll unlock as you play the game, either by simply leveling up those classes or by unlocking them by purchasing them with Data, a form of in-game currency that you acquire by simply playing and doing better. Things such as reflecting incoming damage, grenades, and an automatic taser are just examples of some of the things that you can equip each class with before you even start your run. It’s also worth pointing out that, while items for your loadout can only be unlocked by spending data, perks are actually acquired by playing with each specific class and leveling them up. This means that even if you find yourself having a hard time with the game, you’re slowly making progress, even though the game clearly rewards players who are more proficient.

Now, if you don’t really care about this type of progression systems, which are mostly in place to keep more people engaged and playing the game for longer than they’d otherwise, you’d still probably find yourself having a blast. Synthetik is a top-down twin-stick shooter, but not really in the sense that most people would expect, it’s nothing like Crimsonland or Nex Machina for instance, but instead, it’s much more methodical and much more focused on enemy variety and how the actual shooting feels. As you progress in each run, by going from level to level by finding a teleporter and activating it, you’ll run into harder versions of standard enemy types, but you’ll also encounter new threats that provide a much bigger challenge than before. The game keeps this steady pace throughout its entirety, and I never felt like it was easy, I was always on my alert mode, doing my best to stay alive.

There there are a few little mechanics that make this a much more interesting shooter than average, from having to manage the heat generated by your weapons when you fire them, to trying to take minimal damage to your health by conserving your shield, and even to trying to line up headshots in order to deal extra damage. There are over 60 different weapons, according to the developers, and these also have numerous upgrades that you can equip and even different variants. From hand-held flak cannons to ordinary machine guns, pistols, rocket launchers, rifles that fire homing bullets, there’s plenty of variety to keep things fresh and the player entertained. Along with the various different weapons, the game also makes things more interesting by introducing different amounts of recoil to each weapon type, which makes it so that you’ll be more accurate if you stand still while shooting, even though this makes it so that it’s easier for enemies to hit you. 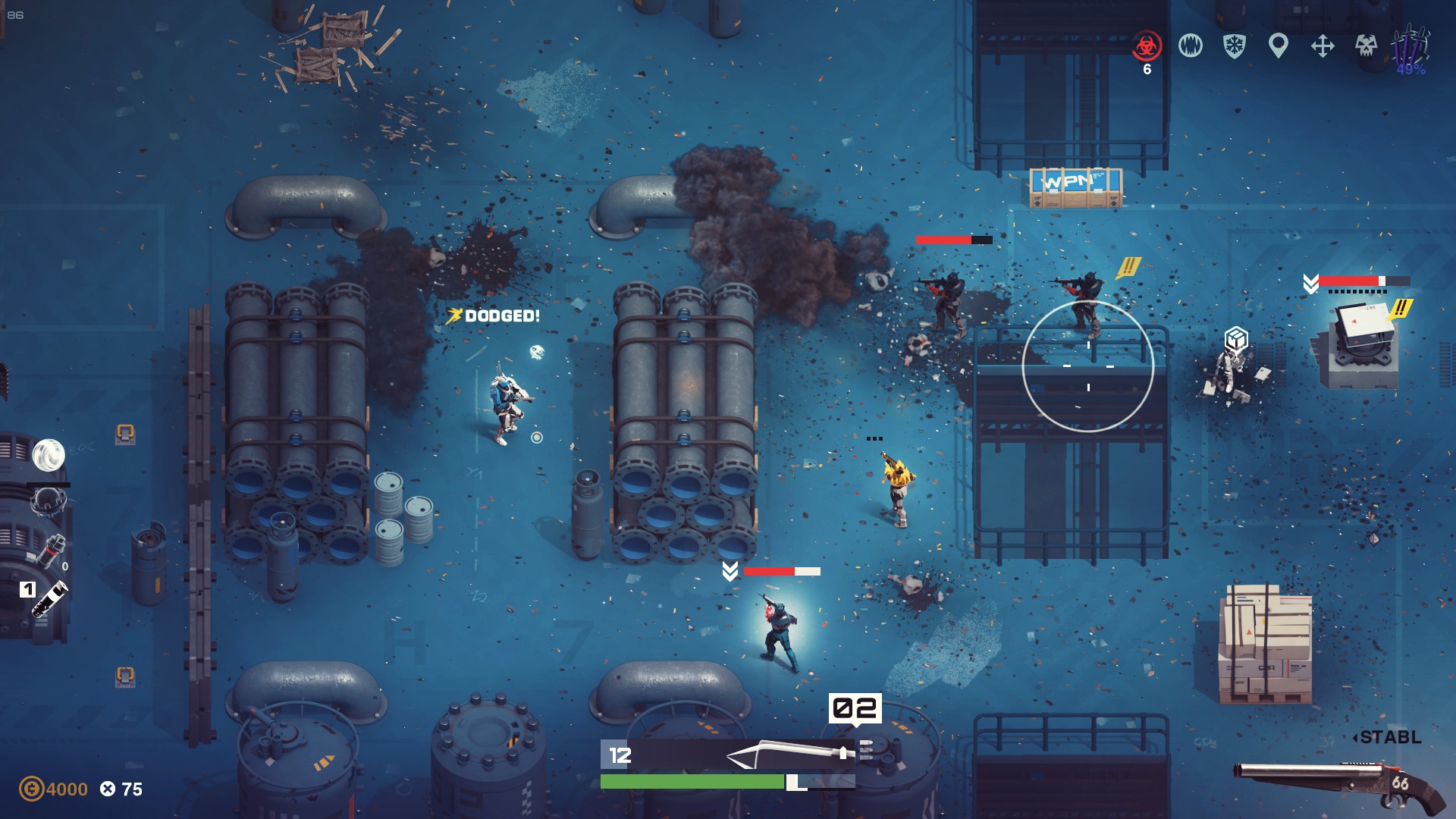 The game really rewards individual player skill, either by handling the various amounts of recoil that you’ll come across, approaching different enemy types in the best way possible, and even reloading. That’s right, reloading. Synthetik offers ten different difficulty modifiers that will grant you greater rewards at a greater risk, and one of these modifiers that is enabled by default is requires you to first eject a magazine before being able to reload a weapon. This not only adds some extra time that you need to account for when reloading during battle but also allows you to get a little small buff if you manage to press the reload button in a specific time frame.There are also other crazy modifiers such as enemies having a chance to deflect incoming damage or even critically wound you, so it’s really up to each person to customize their experience to their liking.

Visually the game looks pretty damn good, especially in motion, the smoke, bullet trails, and explosions are very well animated. The game has a very unique art style, everything looks really clean, and it’s pretty easy to distinguish and see things in the background, even during the heat of battle. The game also boasts a great selection of electronic tracks, which are not only pretty good on their own, but they also go pretty well with the game’s pace.

Overall, Synthetik turned out to be an amazing surprise. I was never expecting that a game which I’d never heard of previously would provide me with such quality content and a great shooting feel. Its compelling persistent progression system, its fast pace, the shooting that feels and sounds really satisfying, the clean look, and engaging soundtrack, all play their role in turning this into a wonderful experience. It’s probably one of the best rogue-lites that I’ve played in recent times, and I’m sure I’ll keep going back to it.