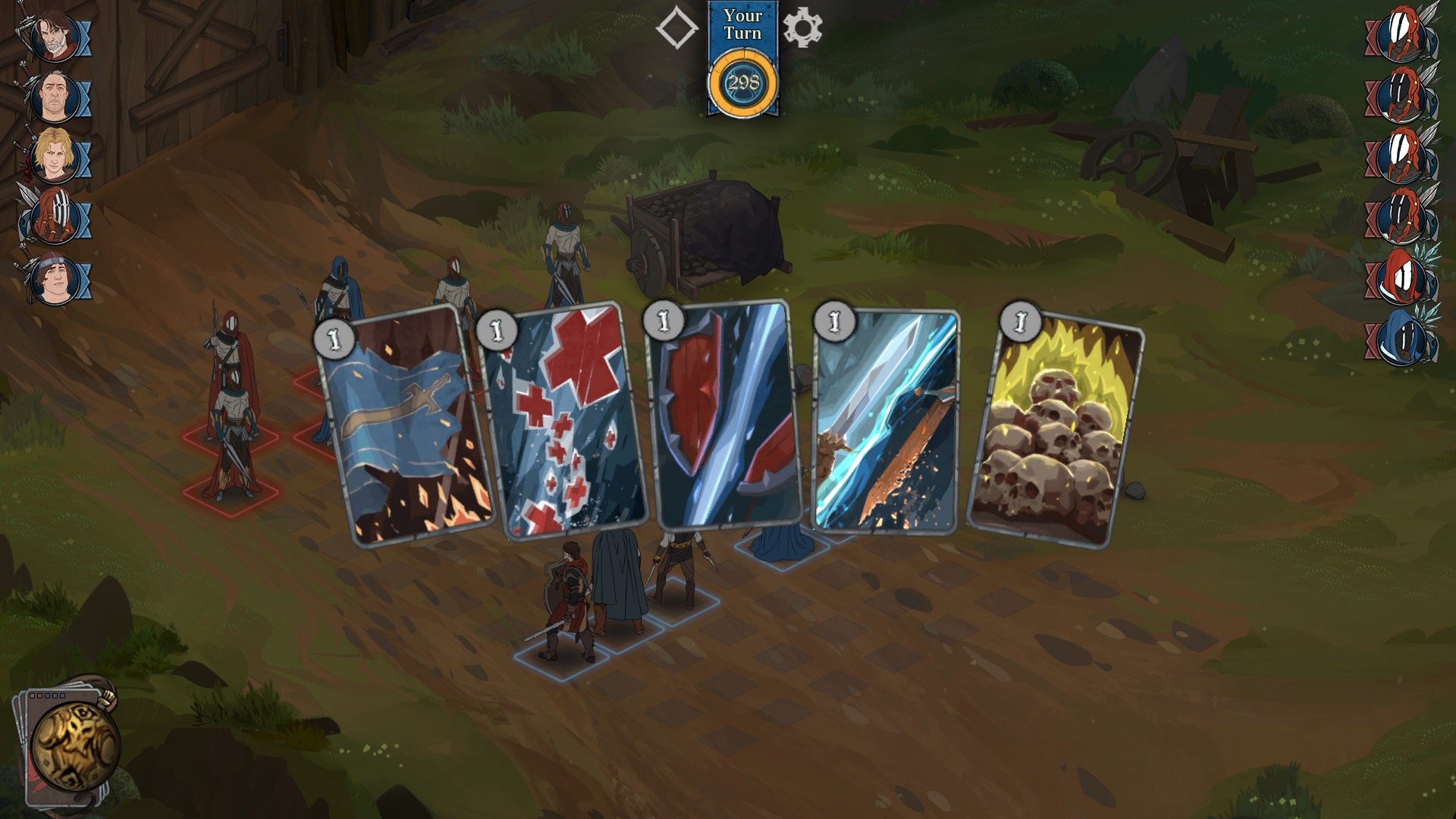 After being successfully Kickstarted last year, Ash of Gods: Redemption has finally made its way to online retailers and is available for anyone to play. A lot of people, myself included, when they first saw this game, might have immediately thought of The Banner Saga series, and I wouldn’t be surprised if some even thought this was made by the same developer, but that is clearly not the case here.

The developers behind this game, Aurum Dust, have received the blessing from Stoic Studio, and it’s undeniable that both games share a lot of similarities in terms of its world design, art style, and even combat. Nonetheless, Ash of Gods sets out to do its own thing, and, in case you’re not familiar with it, it’s also worth pointing out that the game is based on the novels of the Russian author Sergey Malitsky.

Right off the bat, I’m just going to say that the game features a breathtaking soundtrack and visual design. The soundtrack contains the work of composers who’ve worked on great titles such as Shadow Warrior, Bulletstorm, and The Witcher series, and there’s a very specific tone to each track that creates a unique feeling to some scenes in the game. The animations are also extremely well done, and I assume that the fact that the game is locked at 30 frames per second is also tied to this aspect, in order to provide a seemingly flow in each animation transition. This is most noticeable during combat, whenever a unit attacks or performs some sort of action, as every single little move is as smooth as silk.

The game takes place in the grim world of Terminum, which is set in a high medieval setting, but it also has some oriental and even industrial age characteristics present in its worldbuilding. The story follows the journey of three different main characters, alongside their companions, as they try their best to survive the Reaping, a great calamity that is now, for the third time, being unleashed across the world. The sole purpose of the Reaping seems to be to claim human lives, but there’s certainly a lot of mystery surrounding the game’s plot, including a lot of its characters, especially the mysterious abominations that appear in places right before the Reaping takes place. 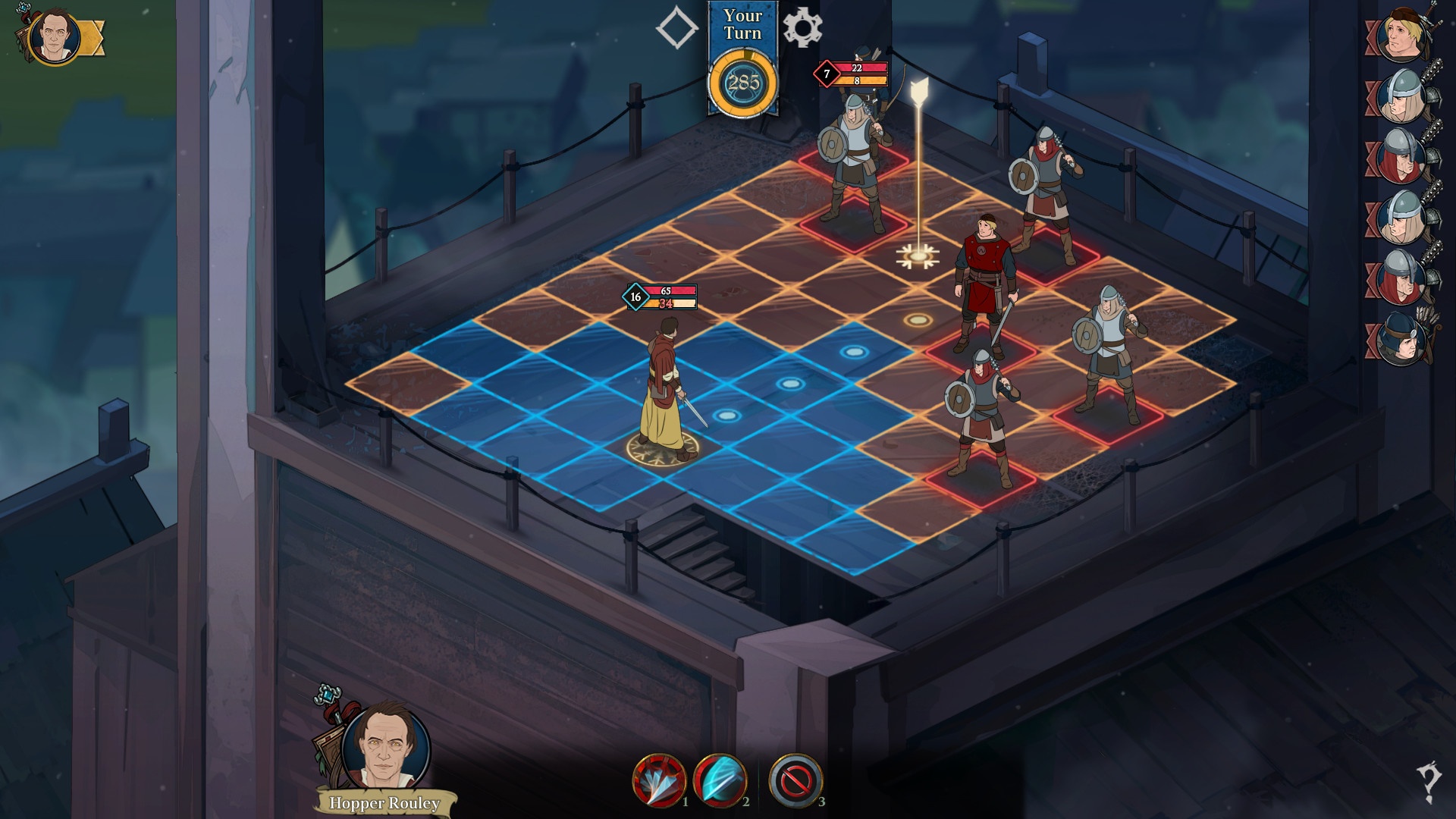 The story is told in a visual novel style, with a few choices here and there that have significant repercussions. For example, choosing to side with one character over another during certain arguments will lead to an increase in their loyalty towards you in detriment of the opposing party, but there are also times in which your decision might as well be a death sentence to one of your fellow companions. The game isn’t really linear per se, as you’re free to travel the world, almost like in a choose your own adventure type of game, by choosing to take certain routes over others, some which cost more to traverse. Along the way, you’ll encounter traders which offer items that can aid you in battle in exchange for gold, you’ll be able to set up camp, chat with your party members, and heal up, and you’ll also come across certain events in which you can approach in different ways, like choosing to save a random stranger at the expense of your party long-term well-being.

The world map is filled with little details about the world, either through simple hand-drawn small things or through text form once you interact with each location’s name. It’s very clear that a lot of effort was put into making this world come true, and that is even more evident the deeper you get into the game. However, there are two things that I do have to point out, which really detract from the overall experience, and one is the fact that the English translation isn’t particularly well done. There a few errors which you can easily figure out what the writer is trying to say, but there are also other occasions in which the dialogue is somewhat confusing. Besides that, the dialogue isn’t voice acted which, in a game like this, where the narrative is one of its strongest features, is kind of a bummer, but the only few bits that are, the narrator whenever you transition from one chapter to another, and some sound effects are pretty subpar.

Now, while on one end you have this amazingly well-built world, with terrific score and visuals, that focuses heavily on delivering this well thought out and exquisitely crafted narrative, on the other end you have the combat and the management side of things, which encompasses the other half of the game. Either when you’re in certain areas, or while you’re on the road, you’re bound to encounter enemies and face them in battle. Combat is turn-based, but you and your enemy take turns in commanding your units, instead of commanding all your units and then proceeding to the enemy turn. This feels a bit weird at times since you can’t really tell which enemy will act next, and this also makes it so that if one side only has one character standing, they’ll act much faster than the party with more units. Nonetheless, despite the fact that I find the combat to be more convoluted than it needs to be, this does create some interest opportunities, such as only going into battle with only a couple of characters instead of a full party. Still, it’s a bit counterintuitive, especially when you consider the fact that if your characters die during battle, that will have a long-term debuff effect on them, while the enemies don’t.

If you have played The Banner Saga, you’ll find this very familiar.  When moving a unit, you can freely move within a few square tiles, but you can also expend energy in order to move even further. Likewise, energy is also used in order to use certain abilities, but some can cost you health points instead. With that in mind, when targeting an enemy unit you can always choose if you want to target their health or energy pool. This way the game allows players to come up with their own approach, one that is better suited for how they want to approach each encounter. For instance, if on one occasion you’re not able to kill an enemy right away, it might be a better option to lower their energy, thus limiting their options in their next turn. Going for an enemy’s energy is also a viable strategy since, when depleted, any damage that that unit receives to its energy will come out as double in health damage.

The game also features some card game mechanics in its combat system. As you progress through the game, you’ll acquire certain magical cards that can only be used once per battle and can only be used after reaching a certain turn, depending on the card. These provide a wide range of possibilities, from sacrificing a random character in your party in favor of increasing your overall damage, to simply inflicting a debuff on a random enemy. The use of these cards also uses one turn and, with that in mind, I found myself to not be using these as much as I probably should. Some cards really sound like they’re as damaging to the enemy party as they are to yours, so I was always reluctant to use them. 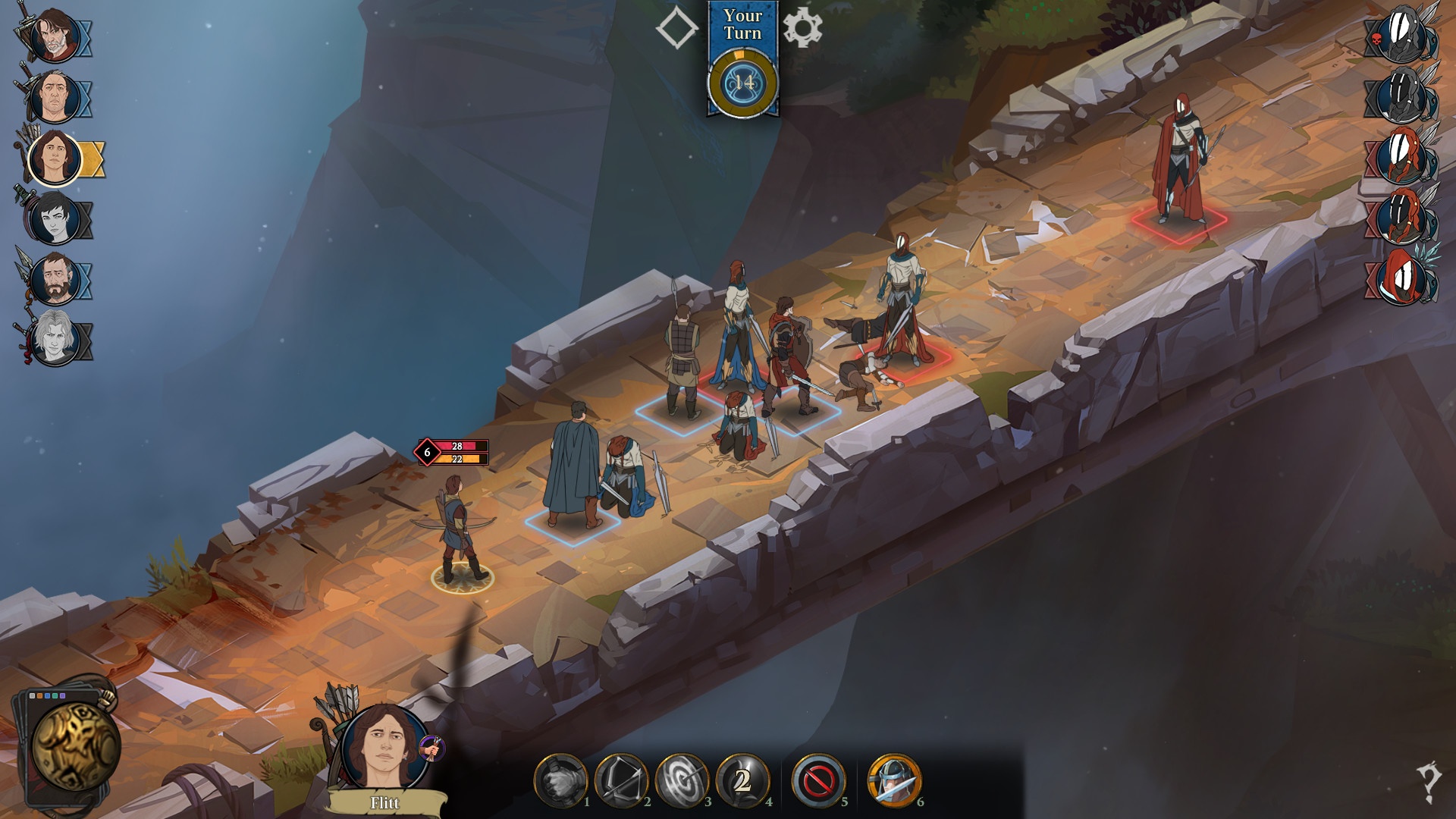 There is some slight customization of your party members, in the form of equipping them with different items that grant them stat increases, to improving their skills and even acquire new ones by assigning skill points whenever they level up. Other than that, there isn’t really anything else to it. On their own, each character is fairly unique and offers a specific set of abilities that others don’t, at least for the most part. There are archers, spearmen, your typical fighters and warriors, a cleric, and even assassins, and a there is a certain degree of planning involved in order to make an efficient party that works best for you.

Now, there is another management aspect that’s present in the game, which is also heavily tied to the game’s narrative, and that is the strixes. These are stones with magical properties that protect humans from the effects of the reaping and, therefore, as you travel across the world map, you’ll consume these in order to keep your companions and yourself from being harmed. With that said, if someone’s health is depleted in battle, they’ll gain a wound, and upon reaching four wounds they’ll be gone for good, and the only way to fight this is by healing at a campfire, which can only be done by spending strixes. Ideally, this would work out perfectly, as you can gain strixes by winning battles and buying them from traders, but in one particular story arc, the balance of these things seems to be way off, and you can quickly find yourself in a really tight spot if you’re not careful enough. At first, I thought I might have done something wrong, but after checking the Steam forums, I found that I wasn’t alone, but there were also other people who didn’t have an issue with this, so your mileage may vary.

At the end of the day, if you just want to enjoy the story and the world of Ash of Gods, the game offers a “Story Mode” which grants you additional resources, more powerful characters, as well as an auto-battle system which is surely to keep you from running into the issues that I’ve mentioned above. The game also features an online PvP component, but that doesn’t appear to be working at the moment, as the developers have mentioned that they didn’t manage to finish it in time.

Nevertheless, while the game certainly has its problems, it seems that they’re the sort that can be fixed with a few patches, hopefully. The combat aspect seems to be very divisive amongst players, as well as the whole strixes management thing, and even I can’t really say if I truly like it or hate it. What really sells the game for me though is its story, the world, the art style, and the music, I can’t stress that enough, as long as you can bear with the current state of the English writing. The first playthrough should last you at least about 20 hours, but this will ultimately depend on which mode you play the game and how good you actually are with the combat system. If the game’s combat wasn’t as weird as it is, the game would certainly feel and play much better, and most of my complaints would probably be gone but, right now, I feel like that clearly hurts what would have otherwise been a truly remarkable experience.