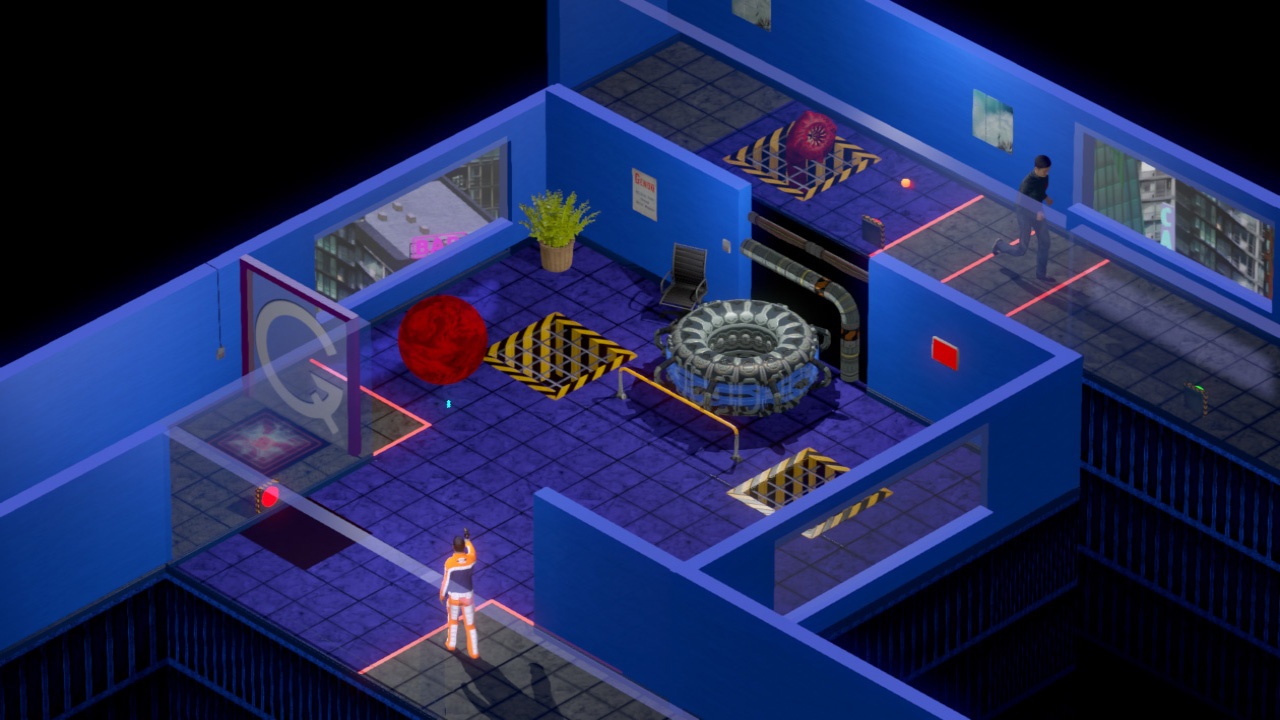 I feel like we all try and make room in our hearts for the classics and the trendsetters. Take, for example, the original Mario 64. Many argue that it’s an amazing game, and it still is: good design combined with a fun experience and decent plot line equals good times. But it has aged, albeit gracefully, and I don’t think it stacks up against many of the 3D Mario games that have come since (especially now that Mario Odyssey is the GOAT on the Switch). Or something like Doom, which made the FPS genre exist but, compared to the current shooters (and even the most recent reboot of Doom), it’s clunky, slow and almost boring. But we respect it. So I feel like D/Generation HD is a game that maybe isn’t going to be for everyone, but it does deserve a bit of recognition, if not actual attention.

The premise of D/Generation (the original) is pretty straightforward: you’re a futuristic courier in the distant year of 2021 who got a distress message from someone named Derrida, working in a top secret biomedicine lab called Genoq. Naturally, you take your jet pack, the parcel AND NOTHING ELSE and fly to Genoq, landing on the roof and working your way in. Something immediately doesn’t seem right, because there are tentacle monsters shooting lasers at you and you’ll probably die as soon as you walk in. Talking to the first receptionist who’s alive will tell you shit’s gone weird and Derrida is elsewhere, so you gotta work your way through the 80 rooms of Genoq to figure out what happened, how to stop it and, oh yea, help some idiots who are trapped inside. DId I mention there’s a bunch of stuff around that wants to kill you and you have a limited number of lives? That’s also important.

The HD of D/Generation comes from the fact that this game originally premiered on the Amiga way back in 1992. This updated version is mostly a graphical unlock, but the soundtrack has also been severely improved in tones and warmth (though the beats tend to be similar to the original). Additionally, you can now save at any point, a much requested and needed feature, which should already give you an idea on how this is gonna unfold. Much like Lumo, this is one of those games where it’s going to be brutally difficult, but that’s due to the loyal porting of titles that simply were more limited in control capabilities back in the day. Namely, our hero, who remains nameless, cannot jump or use his jet pack inside, and everything will kill you with one touch, though now there are some pretty hilarious and surprisingly dated animations when it happens. I couldn’t believe the fire graphic when I exploded: it looks straight out of a Windows 95 screen saver, or maybe an Angelfire website. The callback is welcome and right in the vein with some of the “futuristic” ideas that you find inside. 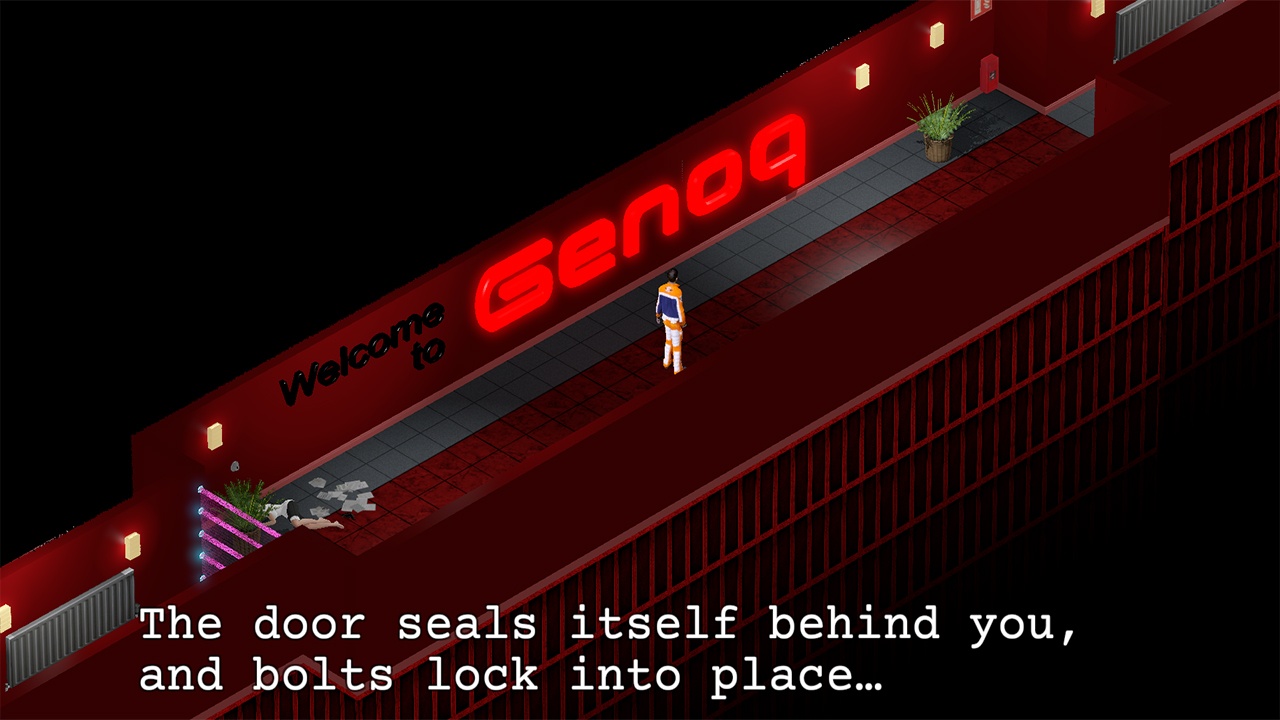 D/Generation HD plays out as an isometric kind of puzzle game, very similar to Lumo or Solomon’s Quest, where the purpose for each room is to figure out the best way to sweep out the danger, avoid traps and save anyone who might be in the room. This is done through a series of triggers that are built into the walls and nooks of the layout, sometimes hidden in plain sight behind a chair or plant that can be destroyed. You early on get a laser that serves a dual purpose of shooting some of the bad guys and also remotely activating switches. Every room has a small amount of freeform to it, allowing you to approach the puzzles from different angles, but the overall solution is always the same, and there may be legit trial and error in order to reach the eventual goal.

Since there isn’t a matter of breakneck action or deeply enveloping storyline here, the puzzles are the focal point of everything, and it’s a blessing and a curse for D/Generation HD. On the one hand, sometimes the puzzles are really innovative. You have the same general formula, true, but there’s plenty of ways to figure out the correct execution. For example, you learn quickly that the laser shots can bounce off walls at certain angles for a limited number of ricochets, which means you need to plan out some proper geometry in order to pass. Wall triggers will turn off some things and turn on others, so sequence becomes important, and you can seriously flub the whole thing if you hit the wrong moment, resulting in your overly cartoonish death. And you can even stand in doorways, preventing SOME doors from rising and giving you a single chance to nail a puzzle and get everything working. When it works, it’s terribly satisfying, and you can see why this classic from over two decades ago got a revamp in this day and age.

On the other hand, however, the isometric design, combined with the aged controls and perspective, also makes D/Generation a bit of a flub. It’s incredibly easy (and common) to misjudge where you’re standing in relation to the triggers and fire off shots that, best case scenario, do nothing. Worst case scenario, you bring death down upon your stupid self and you have to do the whole thing again, including run through long, boring dialogue with the NPCS you should be saving in each room. They all basically help further along the plot and show how things went south, how it’s all cloak and dagger and the courier wasn’t called by accident, but it’s not voiced over or anything. It’s tiny print font in tinier word bubbles that you really gotta squint to read, and I suppose this is to best emulate what it was like back on the Amiga. But the end result is still needing to mash the X button as fast as possible to get through the chatter again so you can tell this person to get their dumbass out of the room. 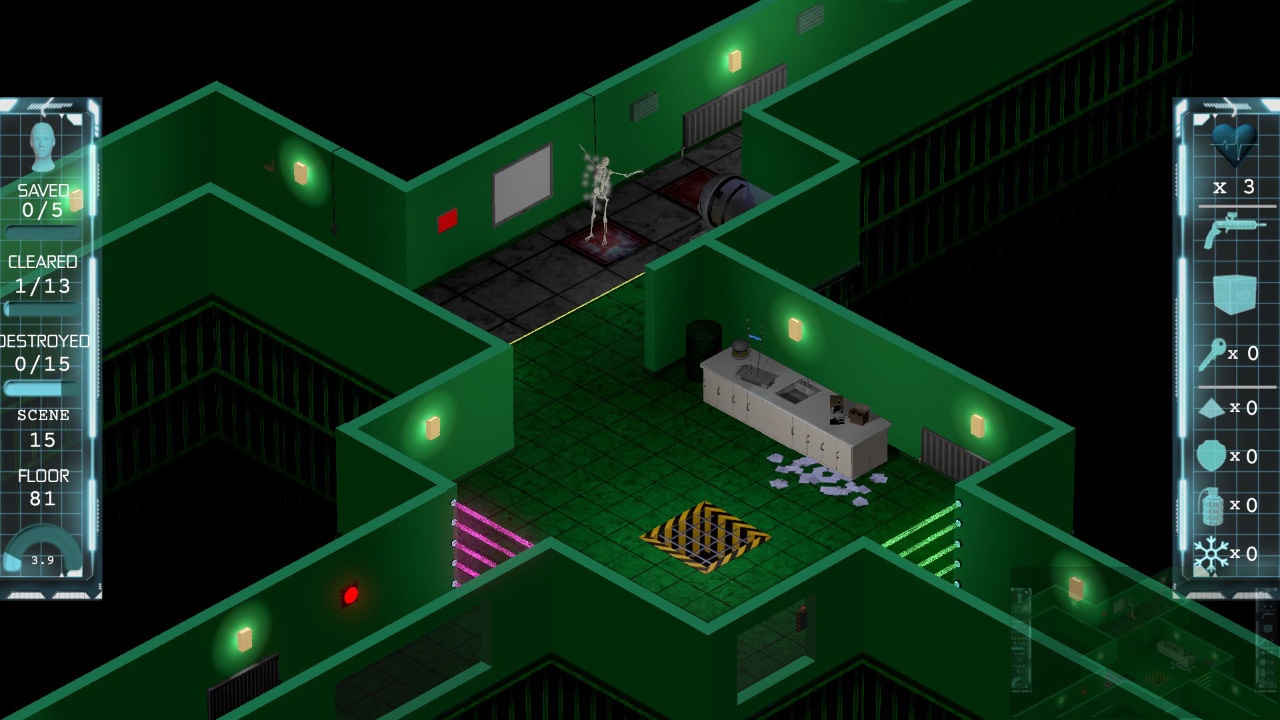 The last thing to keep in mind is that a lot of the appeal of D/Generation HD is going to come for people who either lived through the Amiga era or at least romanticize it. Figuring out the puzzles without a guide or cheat sheet is really rough, and players will get a sort of masochistic pleasure from discovering the correct solution after a lot of failed attempts. However, there’s nothing random about it; once you know the way, that’s it. You can take a game that could have been about four hours the first time I played it and boil it down to about one hour, if not less. Unlike Lumo, there’s not a time attack counter here, so anything in terms of speedrun is totally in your mind and up to your own prerogative. There’s not a replay incentive. There’s just the game, as it stands, with a cool title and nicer graphics (and music, can’t step on the music).

D/Generation HD sometimes feels like a push mower that they used to use back in the 1950s. I’m sure there are plenty of households that still have one, and maybe dad or granddad will trot it out in the summer and challenge their kids or grandkids to try and cut the grass with it. And the kids will do it and see how hard it is and realize how easy they have it nowadays, or how bad their ancestors did or whatever. It’s something to understand and to keep in mind, but if dad made you use that push mower every Sunday while the perfectly good rider mower sat in the shed, you’d call him a jerk. By all means, give D/Generation HD a play if you’re into the older titles, and maybe give it a whirl to see what things were like and how they’ve changed. But I don’t think it’ll win over the hearts and minds of most newer gamers.