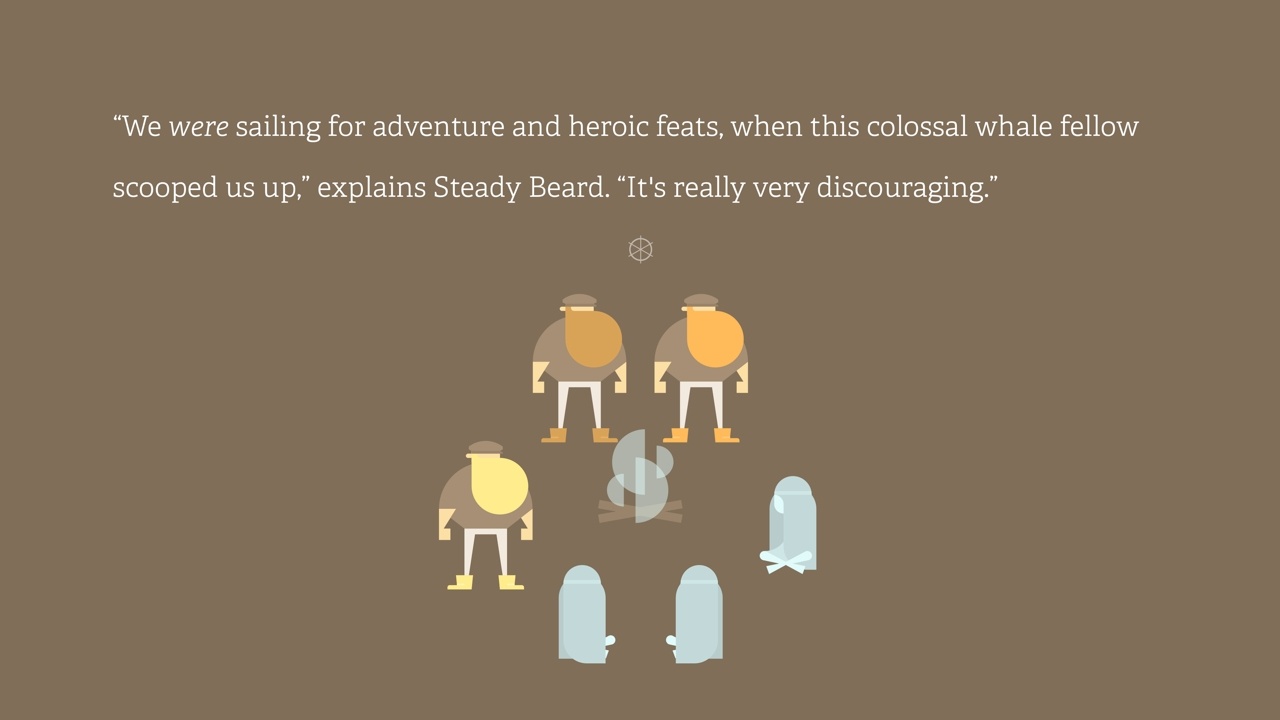 -EDIT 11/04/18 – The developer has been in touch and have managed to fix the bug I mentioned in this review, the update will roll out in the next couple of weeks. As such I’ve changed the review score from 6 to 7 but have left the main body of the text the same.

Burly Men at Sea was first released in September 2016 on PC and Mobile and later on PS4 and Vita in 2017 – it is now the turn of Switch users to guide the Beard brothers through their quest to complete their map. Although developed by Brain&Brain, this release is being ported by Seaven Studios who previously brought A Normal Lost Phone to the Switch. Nothing new has been added to the game but this version will have HD Rumble, motion controls and the ability to use either touch screen or joy cons as controllers.

The basic premise of this adventure is that there are three brothers: Hasty Beard, Steady Bread and Brave Beard (a bit like Top Gun, they’re named after their core personalities) who are fisherman. One day they find a bottle with a mysterious map inside it which has no directions or places of interest on it. Intrigued by their discovery they head into their village, which is on a remote island, and speak to the inhabitants to find out more. The only villager that’s of any help is the enigmatic coffee shop owner (who also has a beard much like the brothers) who tells them the map is blank because it’s the type where you fill it by looking for and encountering your own adventures. This is where we step in, our aim is to guide the three brothers through encounters to find and complete all of the stories available in the game.

Controlling the brothers is easy and effective. They are usually in the centre of the screen with the edges blanked out, you have to choose a direction either left or right (more often right, probably because that’s the way we read) and pull the screen to reveal more of your surroundings. 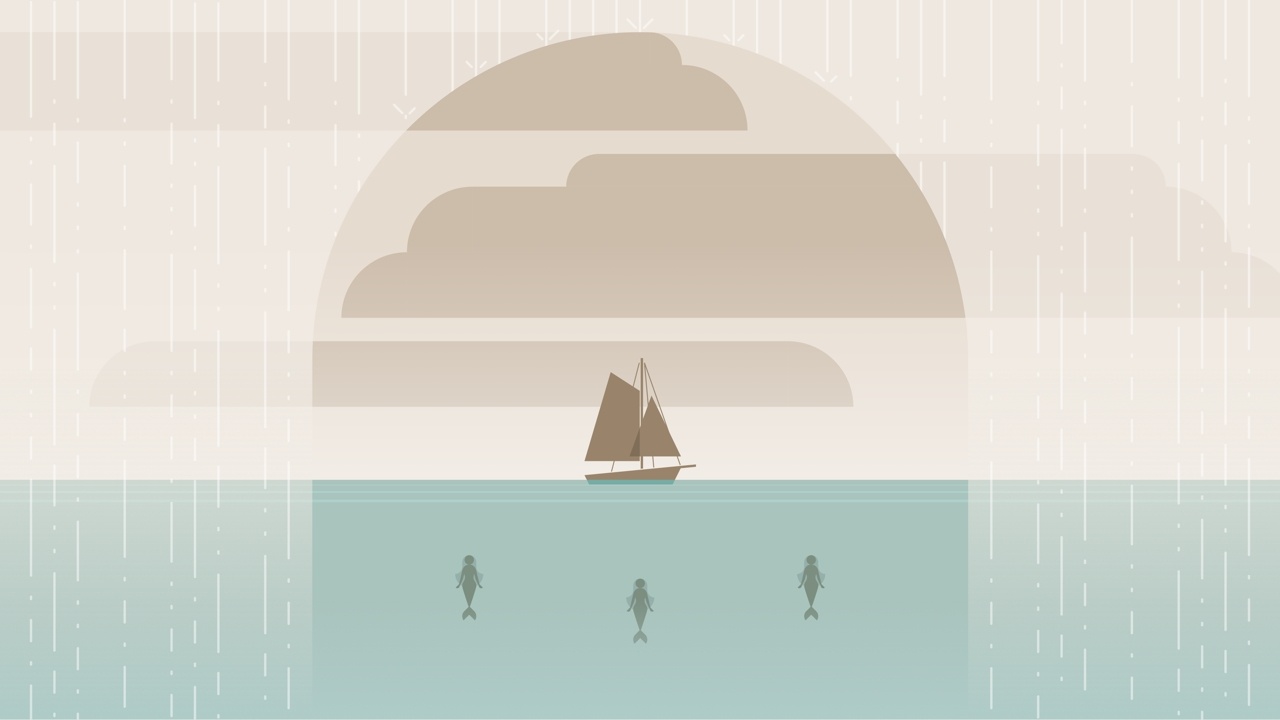 On the Switch there are a couple of ways you can play, either by using the touchscreen to swipe, tap and drag your way through or with one joy-con where you can point at the screen to achieve the same results – there are also gyroscope features available. I mainly used the touchscreen, it just makes sense for a game like this, especially since it was released on mobile. The only downside is I find the Switch quite difficult to hold when playing with touchscreen, it’s just quite an awkward system to deal with, but your mileage may vary.

The art style and graphics are on the simpler side. The best example for simple yet effective design are the fires you’ll see throughout the game, they’re literally a few coloured shapes layered on top of each other that have an animation where they shake and move up and down. Yes the fires aren’t the most realistic but the art style makes them look great. Sound is a similar story, most of the effects are done by a person making sounds with their mouth. It first struck me when I went to the blacksmiths house and the sound of his hammer hitting the anvil was clearly somebody doing the equivalent of beat boxing. If anything this game champions the fact that simplicity can be played to as a strength rather than a weakness, the ease of use, straightforward gameplay and appealing look allow you to focus on what is most important, the stories held within, without being distracted by it all looking or feeling a bit janky.

A session always starts the same; you leave the village by getting the brothers to sail away on their boat. Suddenly a giant whale appears and swallows the men and their boat. Inside you are greeted by three ghostly nymphs that inform you the whale will take you to the promised land if you sit and wait with them, or if you are ‘unwilling’ you can leave through the fountain of the faithless. These choices and subsequent branching paths are the main way you’ll be discovering stories and guiding the burly men. Each interaction will have at least two ways you can deal with it, in the case of the whale there is actually more than two – you can either leave through the fountain with or without flotation devices as well as waiting with the nymphs.

Burly Men at Sea isn’t just a visual novel, there are point and click elements throughout that can have consequences on a story, doing the wrong thing in a situation can end a playthrough prematurely. The way you interact can be quite simple but what you’ll be doing is far from it. Sure during a story where you compete in a race all you have to do is hold on a character to slow them down, this is easy enough but in reality you’re racing an apprentice level grim-reaper-style character to see whether he will take your souls to the afterlife or if you can continue your journey in the land of the living. Another story involves balancing a log the brothers are floating on inside the mouth of a giant crocodile. Although the touchscreen interactions are simplistic you do need to think about the situation and how to deal with it, it’s not always simple. With challenges being varied there is a trial and error element to the game, solutions aren’t always obvious so you will have to slog through parts you’ve already completed to get another chance. 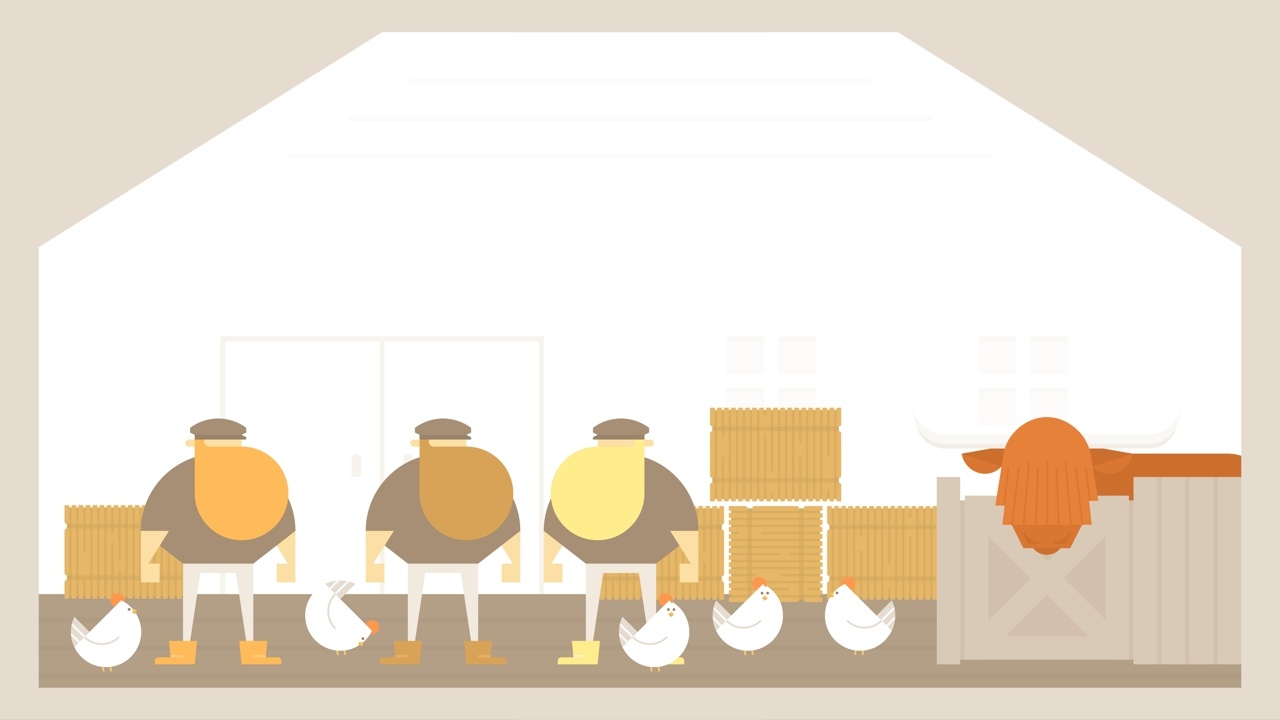 If repetition isn’t your sort of thing then you may be disappointed. The main aim of the game is to try different ways of finishing a story to discover all of the possible outcomes and interact with all of the characters and situations. Conversations with characters will change when seeing the same story more than once but this felt quite shallow, they’ll mention the fact you’re back but the storylines will play out the same way. You can skip dialogue but unfortunately you aren’t able to skip lengthy walking or sailing sequences. Each play through of a branching path is quite short so shouldn’t be too much of a problem.

Unfortunately currently (pre-release) there is a major issue with the Switch version. Whether this is something that will be fixed by the time of release or not, I encountered a glitch that would stop you from finishing a session. When you finish a path you are taken back to the beginning Island where you enter the coffee shop. You then speak to the owner and he checks your map to see what stories you interacted with and makes you a book that catalogues what you have done. However as I click to enter the shop the last Burly Man would get stuck and just stand outside the door. I tried clicking everything and leaving the game to see if it would fix the problem itself but it never did. This in itself isn’t a big issue as from the menu you can just restart at the island so I didn’t need to reset the whole game, but because I didn’t interact with the coffee shop owner that run would not be counted and I would have to do it all over again – which in itself isn’t a big task since they are short to play but when it happens 3 out of 5 games in one continuous playing session it becomes a problem. You can skip through dialogue but you still have to make your way through events, watching certain cutscenes and completing the mini objectives. Seeing the same stuff over and over again trying to get the game to acknowledge you’ve done it was very frustrating and is a big let down. I don’t know if this is a rare case but it would happen to me regularly enough to be a major problem.

Burly Men at Sea isn’t the kind of game that requires lengthy session, it’s ideal for a short bus/train journey or to pass the time in a coffee shop. Gameplay can feel light but this is more than made up for by intriguing stories and beautiful design. If you’ve played this before there isn’t really anything new on the Switch version that would require a second journey but newcomers may prefer this over the mobile version purely for the size of the screen. If not for the glitch this would receive a higher score but as it currently stands you can end up having quite a frustrating experience.