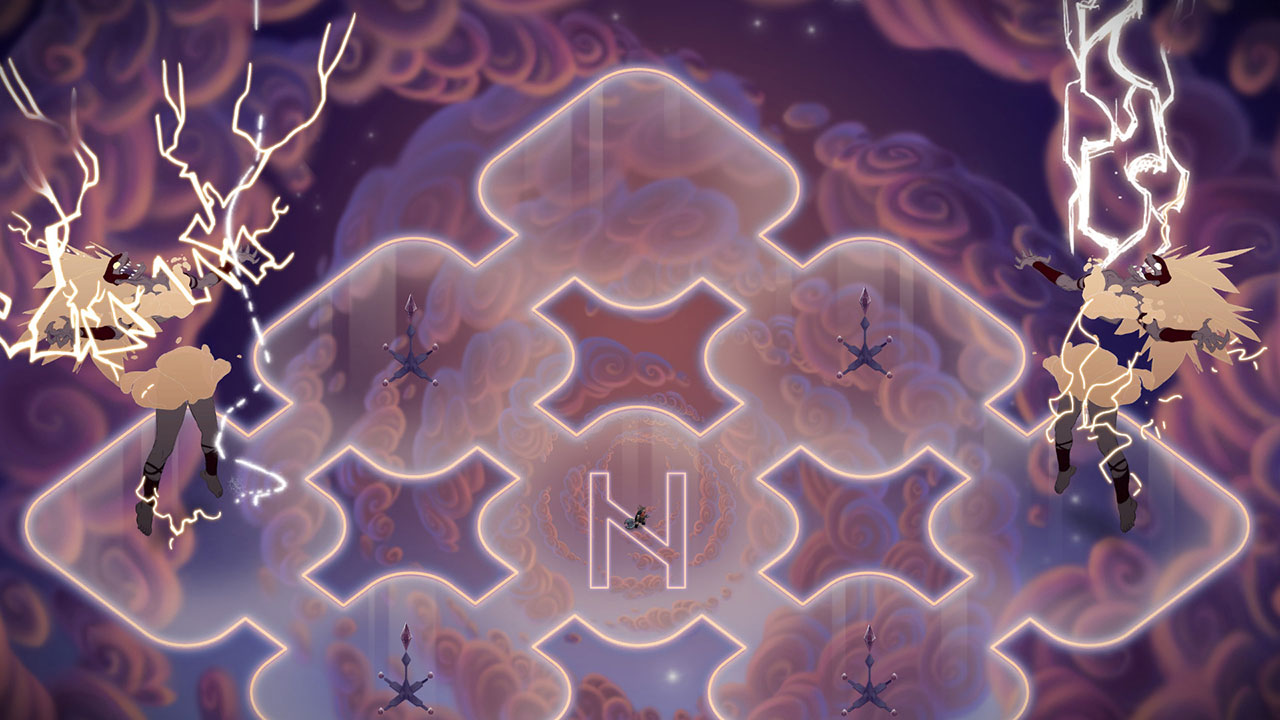 There is a growing sub-category of games where you nearly all of the game is made up of only fighting bosses. One of the most popular and genre defining examples is Shadow of the Colossus, which is a mix of exploration, puzzles and boss battling. When Jotun by Thunder Lotus Games originally came out in 2015, after a successful kickstarter campaign, this genre was just starting to see a revival with the likes of Titan Souls and Cuphead. This Switch release is a port of the Valhalla Edition which came out a year after the original, other than that the only differences for this version are ‘remastered’ graphics and optimisation for handheld mode.

In Jotun you play as Thora, a Viking warrior who dies an inglorious death at the beginning of the game by falling into the sea. You awaken in Niflheim, the Norse version of purgatory, and must defeat Jotun’s, giant Norse elementals, to prove yourself to the God’s and enter Valhalla. The rest of the story, primarily Thora’s past, is revealed through dialogue as you collect runes and travel through Niflheim.

There are five Jotun’s in the game (plus a special boss at the end), each of which are elemental giants which is reflected in the land they inhabit and their abilities: Jera for nature, Fe for cave, Isa for winter, Hagalaz for storm and Kaunan for fire. Each of the five areas are split into two levels that help break up the boss fights. To reach a boss you must first find the two ruins in their sub-levels.

There’s no jump button so the exploring sections are more about making your way through maze like areas, usually hunting for switching or choosing the correct path. Within these levels you’re either making your way through hazardous areas full of poison or fighting off dwarves. I never found these sections particularly difficult, there is a rudimentary map that can help you find what you need and I never died to anything other than a boss. A standout section for me was one of the levels in the Hagalaz storm section where you have to hit gems that bridge lightning in an attempt to copy constellations. 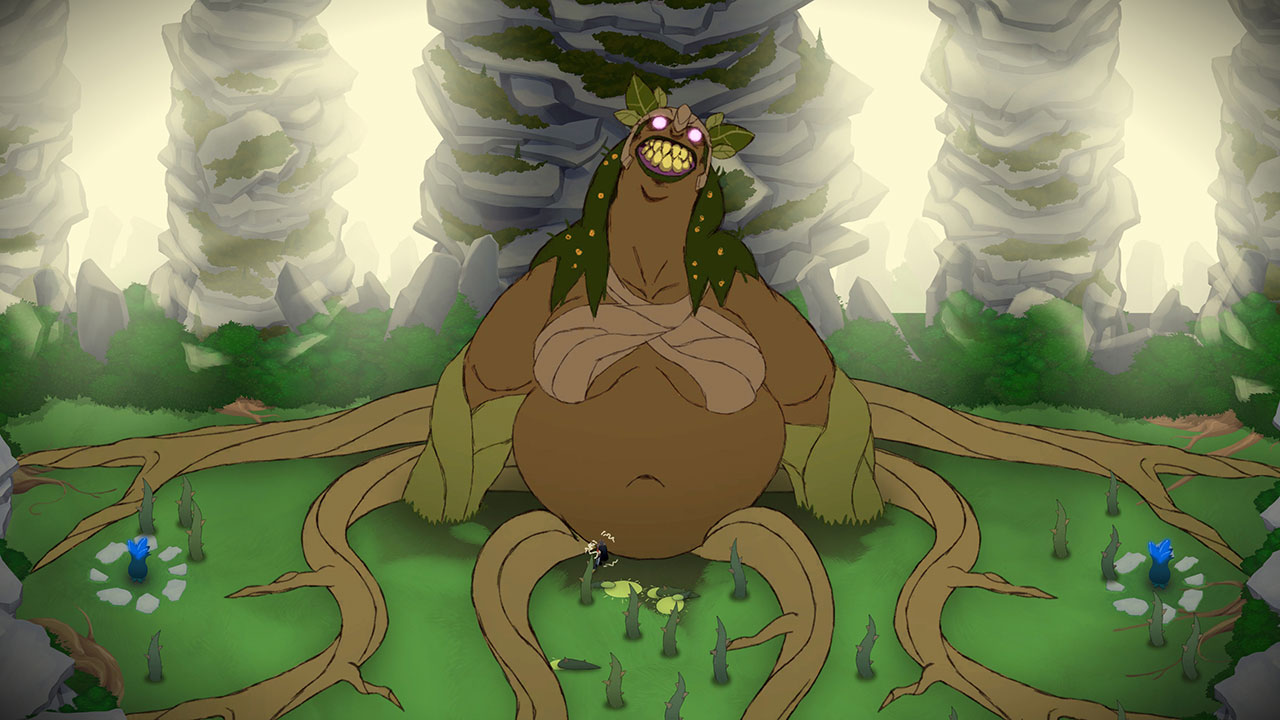 As well as finding the runes there are also abilities and health upgrades to find throughout the game, none of which are compulsory but will really help you on your quest for honour. Abilities are what you would expect: a healing spell, speed boost, stronger attacks etc. They don’t look particularly special when used but help stop fights becoming monotonous axe swings.

Sure graphics aren’t the be all and end all, however the hand-drawn style and animations in Jotun are breath-taking. After the opening cutscene, when you awaken in Niflheim and start to walk up the hill, the camera starts to zoom out revealing a tremendous landscape and really shows you the nature of your task – Thora is shown to be microscopic in relation to this huge world of giants that you must conquer. There are several moments throughout the game where the camera will reveal the wider world and every single one impressed me.

Jotun not only looks great, it also plays smoothly. The only performance issue I ran into was a minor glitch where one of the dwarfs from the fire area would chase me around endlessly but I could not hit or kill him. Thankfully he also couldn’t hurt me so it didn’t ruin the game in anyway, he disappeared after leaving the area. Bosses also felt fair, dying was almost always down to my own play than to the game letting me down. The only time I would argue this isn’t the case is during the Fe fight. When you hit him enough he can fall over, which then pushes you back and can knock you into falling fireballs or lava. Even if you telegraphed when he was about to fall, there are times that you couldn’t possibly move out of the way as you’re surrounded by flames that can harm you. 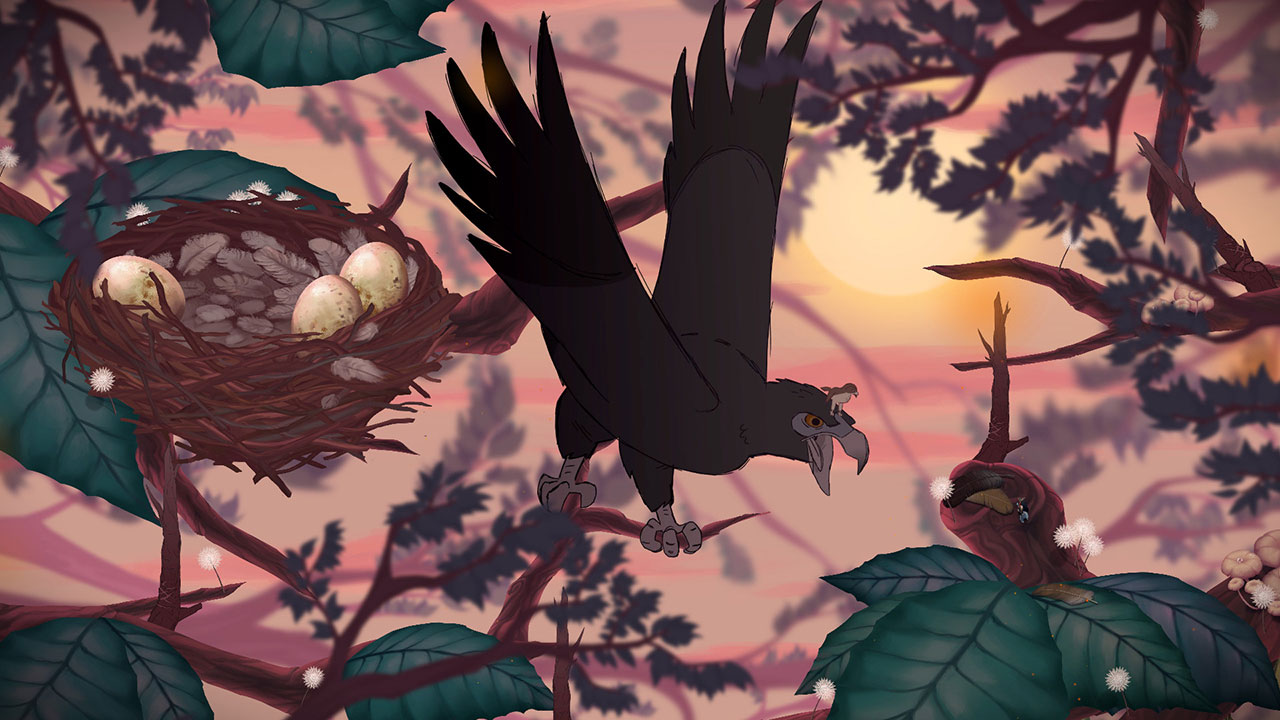 I am a big fan of Boss only games but Jotun is lacking what others like Shadow of the Colossus and CupHead offer, sheer difficulty. I beat half of the bosses on my first or second try, the other three ranged somewhere between 5-10, which is nothing when their health is so low – a regular battle can take less than a few minutes. When I was struggling on a boss it basically came down to proper use of special abilities, and even then I didn’t find all of the upgrades available for the special abilities and I missed one altogether.

After finishing the main game you unlock Valhalla mode which is boss rush. This most is self explanatory, you have access to all of the bosses and beating them will add to a leaderboard. If that’s your kind of thing it could extend the length of the game quite considerably as your try to improve. Valhalla mode also serves as a type of hard mode as the bosses are much tougher  by being more aggressive and mixing up the order of moves. It would have been nice to see completely different attacks from them, but there’s still enough here to warrant more playtime.

For the price (£10.99 in the UK on release) Jotun: Valhalla Edition is a real treat. Sure it’s on the shorter side and doesn’t have much in the way of a story but it’s incredible graphics, style and borderline perfect performance make this boss only game a worth-while contender for any Switch library. Unfortunately if you’ve played this iteration on any other platform there’s nothing new for you to dig into but for newcomers this game fits perfectly with the Switch and is a must buy.