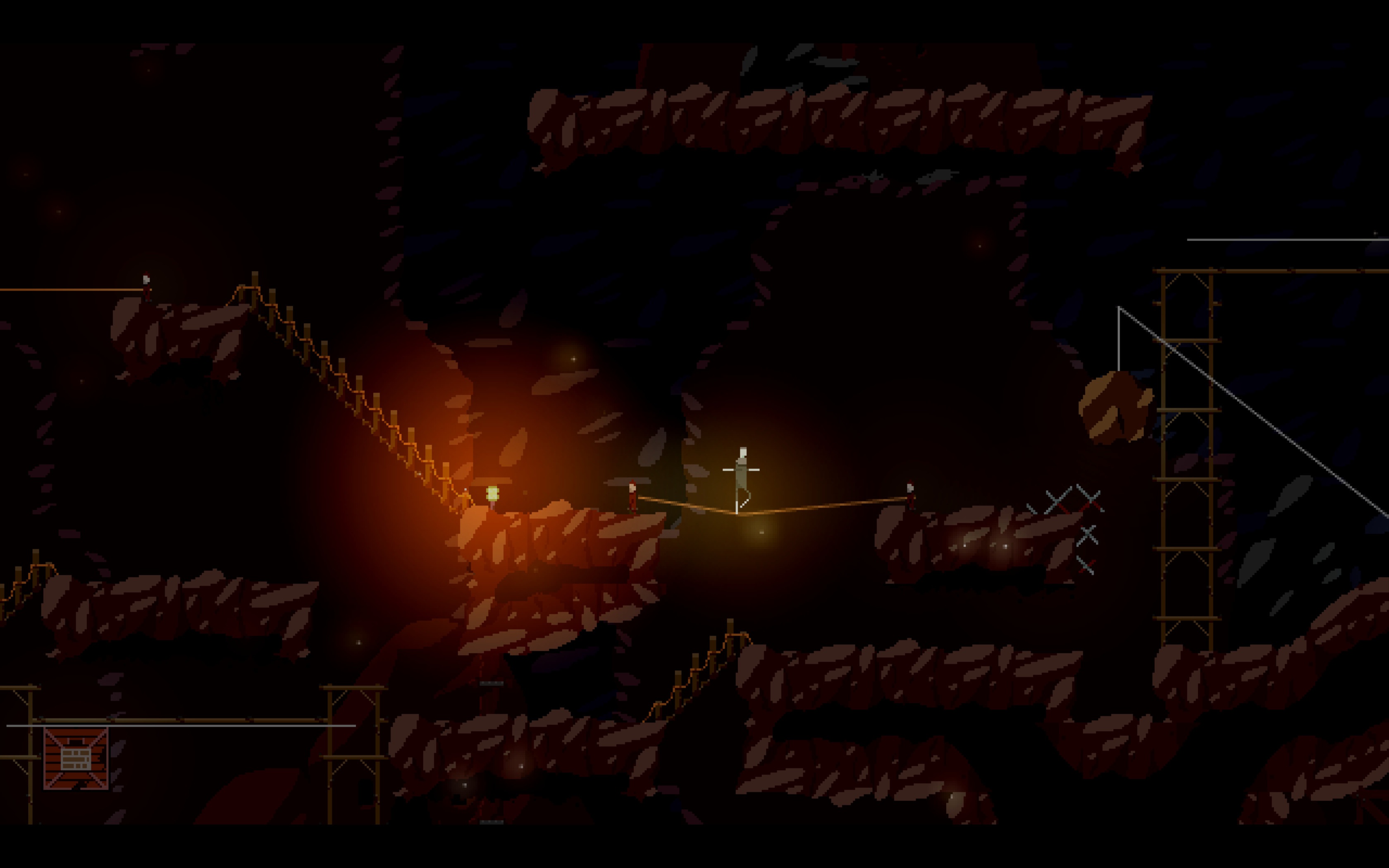 At first glance, The Thin Silence appears to be one of those retro games that harks back to a simpler time of 8-bit graphics, beeping sound effects, and side-scrolling platforms and puzzles. However, there is nothing simple about the past within this game. A deep and dark story runs through The Thin Silence, one that explores issues of regret, remorse, and depression as your character wrestles with his own demons.

The game begins with your character Ezra awakening after a fall not quite sure (nor willing to think about) how he got there. It soon becomes clear that this is his literal and figurative rock bottom. Through flashbacks and hallucinations, the pieces of the story slowly start to reveal themselves. There are in fact two stories unfolding throughout the game – Ezra’s personal narrative and the aspects of his past he wants to forget, and the backdrop of a dystopian military society and the resistance that struggles against it.

Both stories are revealed as you progress through the game. Ezra faces fleeting visions and recurring reminders that he initially tries to push away. Later, he comes face to face with people from his past and has no choice but to finally come to terms with what has happened. The wider narrative is revealed through scattered pages of a book written by the resistance, revealed one sheet at a time to spread the message further and wider.

The two stories soon intertwine as it is revealed that Ezra had a role to play in the conflict. I will not go into details here so as to avoid spoilers, but just as it seems he is reaching a resolution with one of his personal demons, another one rears its head and sends him into a spiral of depression and regret once again.

The subject matter is deep and challenging, but the story is well-told. Accompanied by an atmospheric soundtrack that matches the mood of each scene perfectly, it draws the player in and makes you want to continue playing to uncover more of the story as much as anything else. 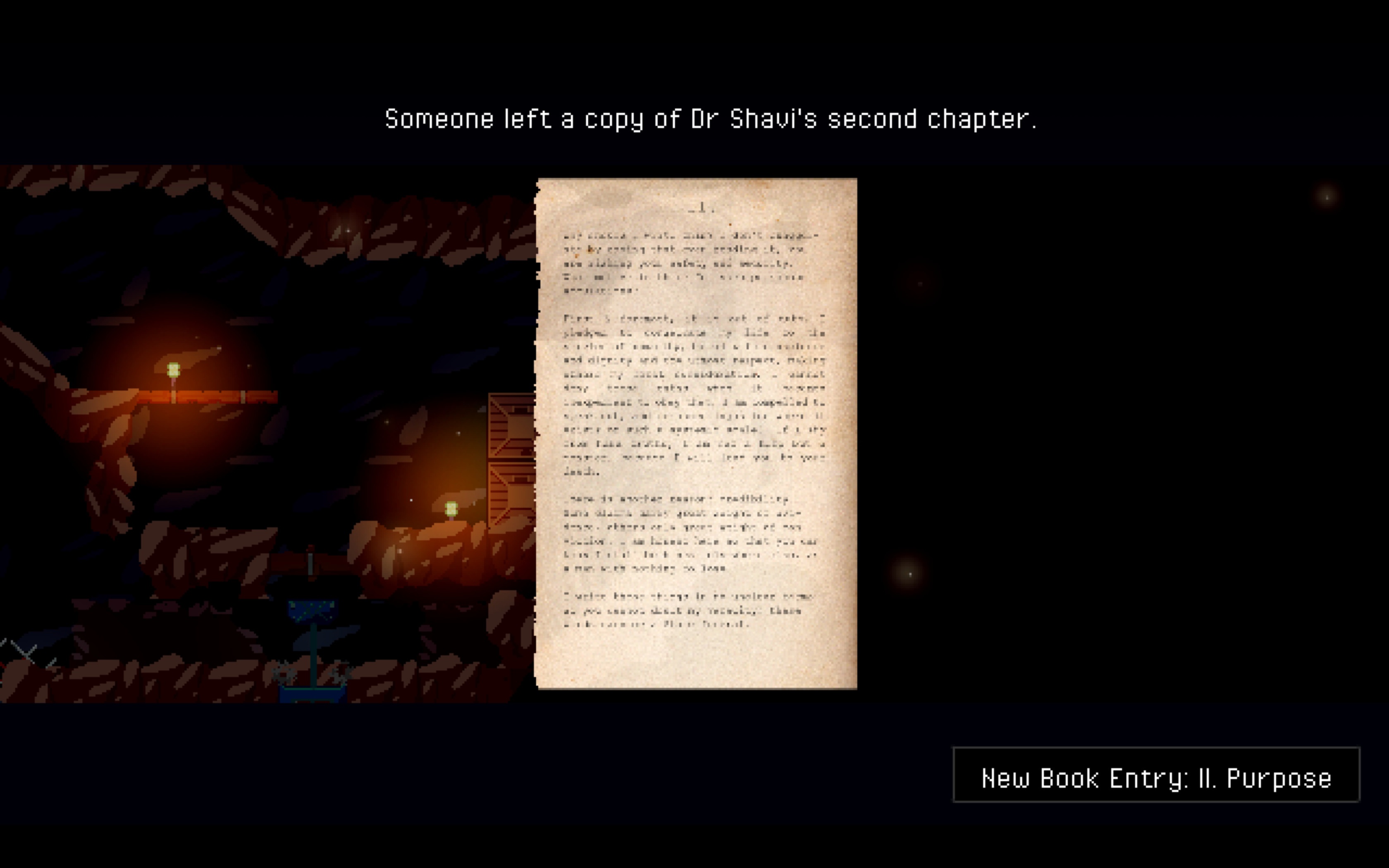 While the story may be at times dark and complex, the gameplay takes a simpler approach. The 8-bit retro graphics are presented together with what is essentially a side-scrolling platform game with a series of puzzles to unlock to help Ezra progress.

Items can be found throughout the game to help with solving the puzzles. Initially, a boot and a hook are found and put to use. The boot is used for kicking small and medium obstacles out of the way, and the hook helps Ezra climb over ledges and barriers. Combine them and you get climbing boots, perfect for making your way up chain link fences.

Further items are added to the inventory over the course of the game allowing for more complicated puzzles to be navigated. Up to three items can be combined to perform a number of tasks. Some stages are more difficult to clear than others, but I never found myself frustrated by them. A little scouting ahead and forward planning and a way through presents itself.

You may at times get stuck, in which case you can reset the current screen and begin the puzzle again (perfect for those times when you trap yourself in a hole by pulling a crate too far!) There are also computer passwords to hack, which require some logical thinking but once again are not too taxing.

Progress can at times feel slow. There is no option for your character to run and the jump action results in a small bounce that actually slows down your movement. Some puzzles take a few attempts and/or a few minutes to get past, and there is no chance to skip through the text-based dialogue (though you can just read a summary of the pages you find if you wish). However, the way the narrative in this game is set up, it is not a game to be rushed through. The story deserves your attention and is engaging enough to make the player want to find out more. 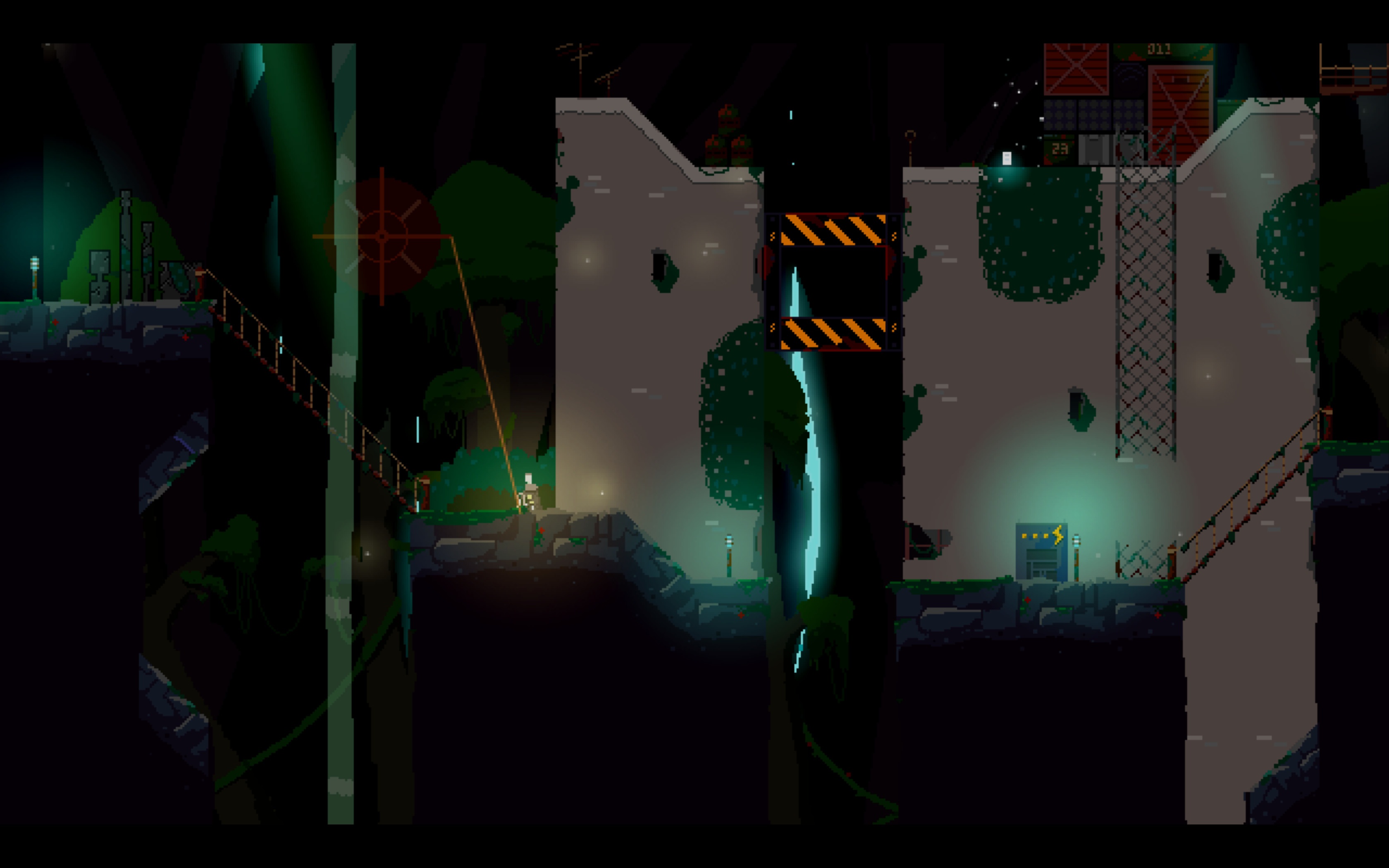 The Thin Silence does not overstay its welcome either. Completing the game takes 4-5 hours meaning it never seems to drag. One small but important feature I liked was the updates on your progress displayed as a percentage on the start screen. Seeing that you are 64% complete offers an encouraging indication to the player that the story and game are progressing.

It is the story though that is the star of this game. The parallel tales of an apocalyptic future society and Ezra’s own personal role in it make for a harrowing and engaging tale. The game is prefaced by warnings about the themes of depression and regret in the game and advice to seek help if such things affect you. This is where video games can be powerful tools. They have evolved from the days of high-octane platformers with quirky characters to embrace subject matter such as The Thin Silence. Players who have never experienced depression get to see it up close through the eyes of their character, which hopefully brings greater empathy and understanding.

Overall, it is difficult to find the words to summarise my gameplay experience in The Thin Silence. Saying I enjoyed the game does not seem right in the context of its subject matter. Saying I engaged with the story and felt lightly challenged by the puzzles and more deeply challenged by the themes of the game is more accurate. This is a fine example of a well-written narrative driving a game forward and creating an engaging indie title that deserves your attention.