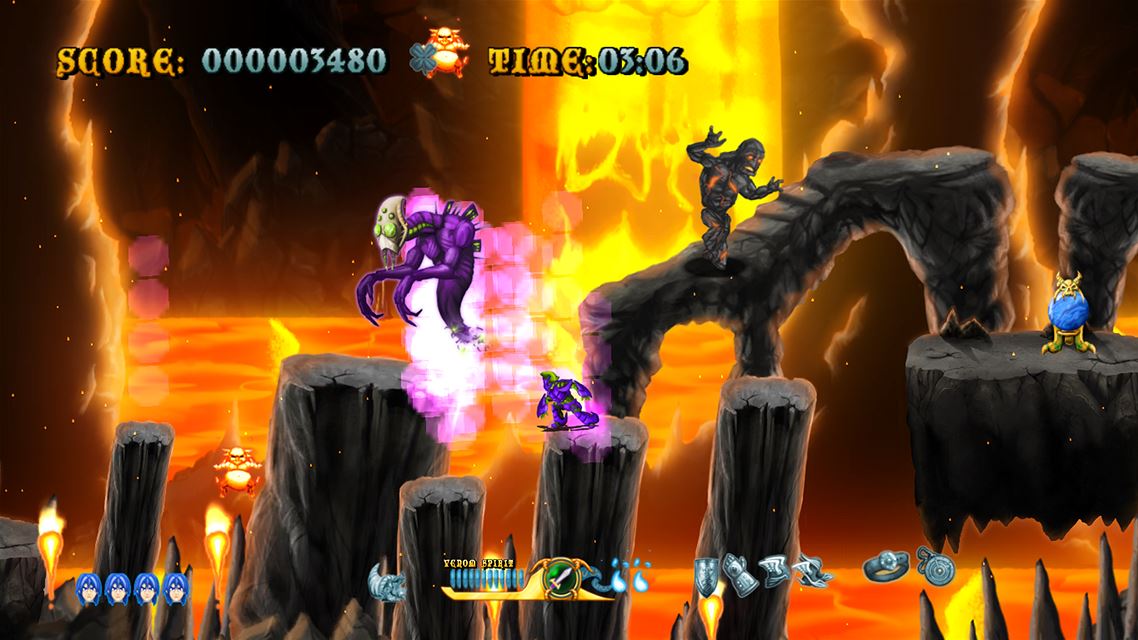 Cast of the Seven Godsends is one of those really strange titles that feels like I’ve played it before even though I’ve never touched it even once. Trying to Google around about it gives me the fact that, on Steam, it’s listed as Redux, implying an earlier version. However, on the Switch, the Redux has been dropped, promoting this as either the official or the only version. In any case, it’s not hard to see where Raven Travel Studios drew their inspirations from when it came to creating this game. These are folk who were desperately in love with the 8 and 16 bit eras, where pseudo-gothic design and really punishing enemies were not only common, but expected. So, in the same vein as Volgarr the Viking or Slain, we dive into the world of Cast of the Seven Godsends.

The prologue tells the tale of a really evil dude, Zaraaima, who was sealed away, long ago, by the combined powers of seven gods. These gods proclaimed that he would be sealed away forever, so done deal. Naturally, they forgot to check the expiration dates on their seals and, guess what, Zaraaima escaped and promptly stole a baby. A royal baby, to be sure, but still, a rather rude “first day back” kind of move. The baby’s father, King Kandar, decides that he’s rather fond of his baby and wants to get him back. The gods, sheepishly apologizing for not making the seal more “forever” and offer their aid, and Kandar accepts. Now Kandar must travel through six lands and face hordes of evil beasts in order to get his son back. As far as retro plotlines go, this one is bang up and spot on. 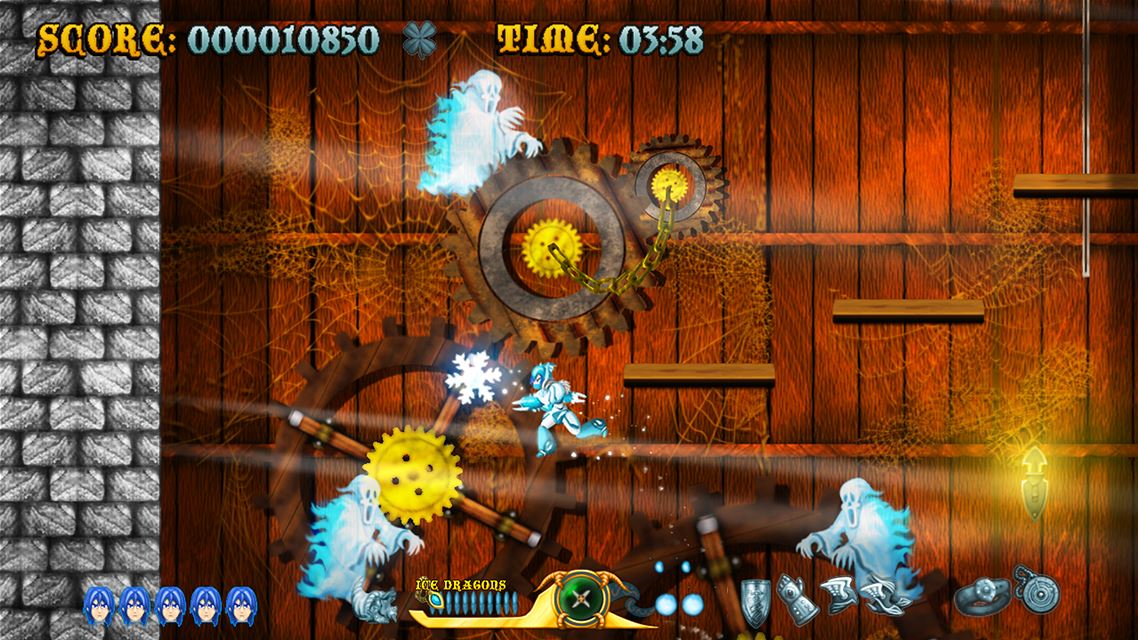 Out the gate, I need to commend Cast of the Seven Godsends for their technical efforts that went into the port of this game. Besides the fact that it handles incredibly well and load times are a non-issue, this is one of the times where the options really cater to what kind of player you want to be. Sure, there are the usual language and volume adjustments, but the difficulty levels start on easy, go up to hard and then have the additional “retrogamer” which creates a whole new take on the game (and properly caters to the fans it seeks to attract). Additionally, this is the first title I’ve seen on the Switch that allows players to decide if they want to game in 720p or 1080p right in the setting, and the results are startlingly different. I would recommend keeping it at 1080p when docked so you can appreciate the hand drawn animation and character design, but dropping it to 720p when handheld to get the most out of response time and action. The option to toggle scanlines on and off I can take or leave, but it’s important to some retrofans, so whatever.

The primary gameplay of Cast of the Seven Godsends is side scrolling, semi-platforming, getting murdered action with little to no mercy. If you choose to put the game on easy you’ll be able to get relatively far your first play through, but anything normal or higher is justifiably brutal. The controls are dead simple: one to jump, one to shoot. You can shoot in almost any direction, and there are pickups that occur along the way that’ll naturally increase your damage or jumping power. The extra jumping power is phenomenal the further along you get, because being able to bound higher to dodge enemies and projectiles is a must for getting through certain areas. And, in a very Castlevania-esque fashion, you’ll grab weapon changes that create different speeds, arcs and damage as well. Many people have compared it to Ghosts ‘N Goblins, which I can see, especially with the armor pickup that happens frequently. However, I don’t want to lean too heavily on the comparison, because it does take away from what Cast does on its own, and does well.

The seven godsends that the title mentions are these roulette-chosen powers that you’ll also find as pickups, and each one is a style and gamechanger. Some gods give you awesome fire magic and the ability to launch a phoenix to hit enemies above you. Some hurl icy projectiles and freeze enemies. One of my favorites was a shuriken throwing god who, no joke, allowed you to fly for short periods of time. Which meant I could avoid a whole slew of monsters, throw some ninja stars around to clear the air, then recharge and fly again. You get to keep your god powers activated until you get hit a couple of times, at which point you revert to plain old King Kandar with the armor and the sword and the ghost helper who also shoots daggers. You know, that dude. 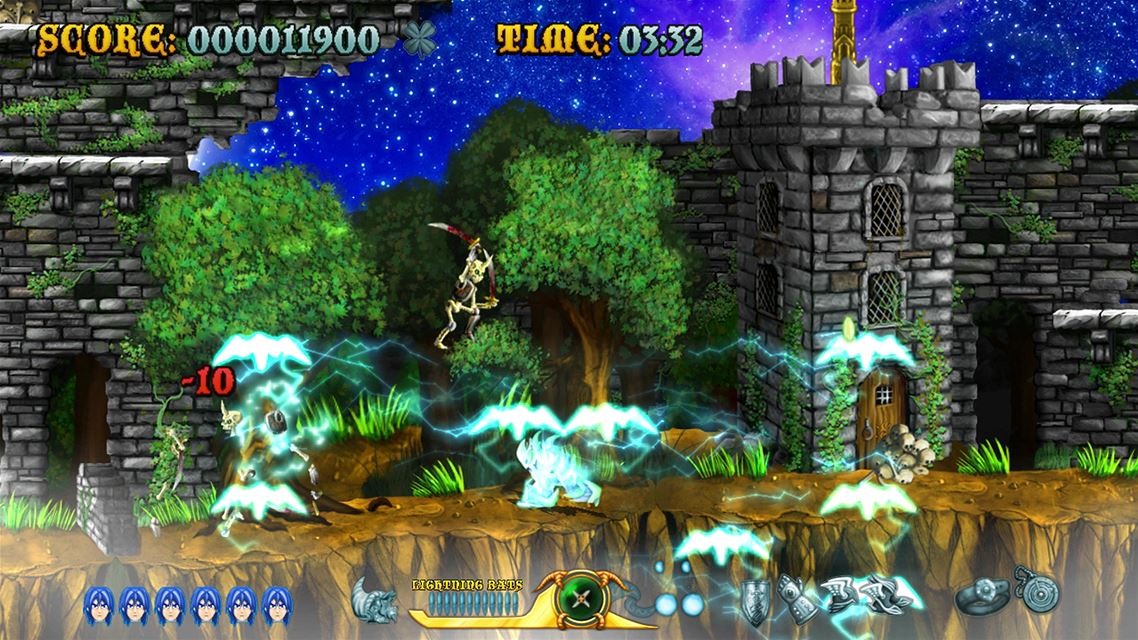 While the visuals and music of the game are perfectly matched to the atmosphere of the game and what Raven Travel sought to create, it’s the game’s approach to the challenge and the genre that makes it a fantastic match. This game is hard in the sense that it’s unforgiving. You aren’t going to end up with random deaths from nowhere a la Fortress of Peril, but you will move between worlds, realize that the enemy before you is armored and has a small window of weakness, and you very well may die before you find the window. You travel across dense forests, village rooftops, snowy cravasses and deep into the heart of darkness itself, and you’re beset, on all sides, at all times. There’ll be pitfalls that are totally obvious AFTER you fall into them. There’ll be the best paths to take to reach the other side that are apparent while you’re on fire on the wrong path. And, when you die enough, you get kicked back to the very start. No save points here, just checkpoints that run out sooner than you’re ready.

And Cast of the Seven Godsends makes a great and compelling reason to continue to run time after time. Not only is the game challenging in a way that drives you and keeps you hooked, there is actually an ideal ending that you need to, essentially, unlock through good gameplay. Once you understand the ins and outs of how this game is supposed to play, you realize that, from start to finish, you can do this whole game in under and hour, and now, suddenly, it’s a challenge. There are achievements to get in the process and easter eggs to find, but the game itself creates incentive to play it better, play it harder, make it faster and be much stronger (well, that was a Daft Punk moment, can’t take it back).

There’ll always be players who want the retro to be in the present, and, for those folk, Cast of the Seven Godsends is here and ready. It’s got moments of great frustration that are overcome through skill and perseverance. The story is familiar, the mechanics are solid and the overall experience is fantastic. If you’re a fan of the games of yesteryear and want something to play today, Cast of the Seven Godsends is a great fit on the Nintendo Switch.