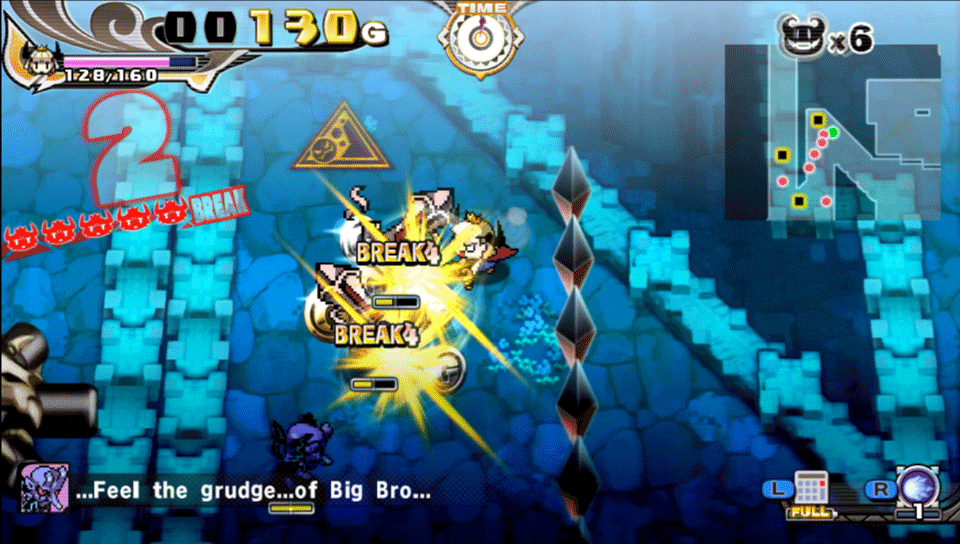 Penny Punching Princess is not suitable for casual play. And by that I mean: if you’re the type who likes to play through a game in one go, without having to backtrack and put extra effort into becoming strong enough to progress, you won’t enjoy this title. That being said, if you’re the patient type who doesn’t mind a bit (or a lot) of repetition, you may find this game to be a flawed, but still fun hidden gem.
The story behind PPP is as follows: the Dragoloan family, a local mob operating under the guise of a lending company, has played a part in the death of your father, the king, and you seek revenge. Never mind that your late father’s spending habits are the most at fault here. Gifted the a magic calculator with the power to bribe monsters and relics alike by the somewhat shady god of money, Zengami, it’s up to you to brawl your way through groups of enemies, take down the mob bosses, and eradicate the Dragoloan family once and for all.
The game is divided into chapters, which are divided into missions. Between each is a cutscene where dialogue between Sebastian, your stag beetle retainer, and members of the enemy forces exchange dialogue. Dialogue is somewhat humorous, though I was a little confused as to why everyone in the game has what phonetically seems like a Southern accent except for the narrator, who is the only voice acted character. The final mission of each chapter contains a boss that needs to be defeated before you can progress to the next chapter. 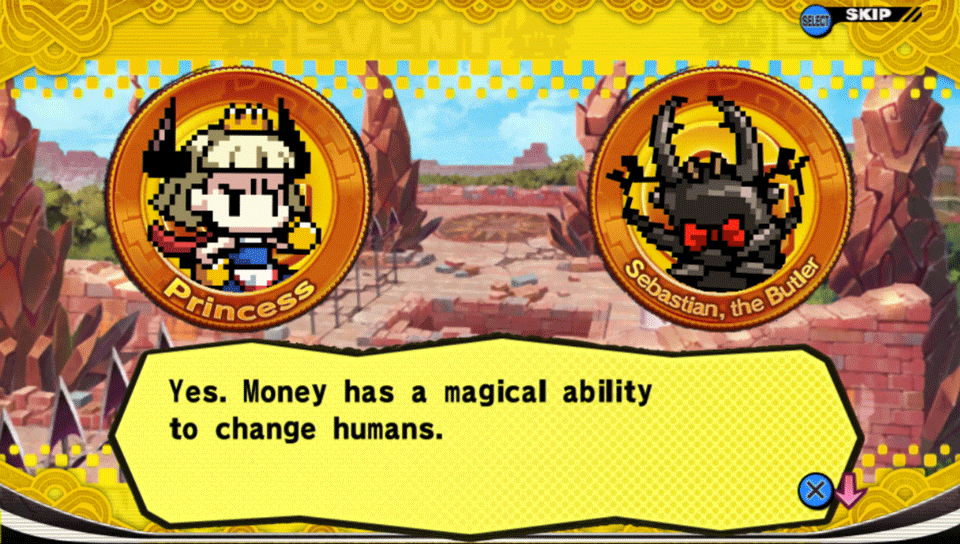 Controls are simple: heavy (circle) and light attack (square), dodge roll (x), and a special attack (R1). You can also access your calculator by holding down L1. The rest is done with the touch screen, which is where one of the game’s largest issues lies.
PPP is a brawler, meaning it’s fast paced. Enemies will chase and attack you and relics will limit your range of movement with spikes, poisonous clouds, and gouts of flames, meaning you basically have to run in circles in order to avoid taking damage when you pull up the calculator in order to input an amount of money. The same goes for when you’re waiting for the battery recharge as there’s a cooldown between uses. After you awkwardly input the amount on the teeny tiny buttons, you have to tap on the enemy or relic you’re trying hard to avoid and this becomes a challenge especially when there’s multiple enemies on-screen, in which case it’s so easy to select the wrong one. The calculator also gets in the way of seeing what’s under it, which is unfortunate if you stumble into a trap. It can be moved, but to do so while running around avoiding  enemies is a hassle. Maybe that’s less of an issue on the Switch’s bigger screen, but on the Vita, it really put a damper on fights with a larger number of targetable objects. This is the game’s main gimmick and it’s flawed. In my opinion, it could have done so much better with a tactical pause at the least.
Relics and monsters can be used against enemies when in range. Sadly, you can only employ one gimmick at a time and the next thing you bribe overrides the first. Each monster and relic has a limited amount of uses, so after depleting them you’ll need to bribe a new one. Bribery can also be used to get you out of a pinch as stronger enemies can be recruited and therefore defeated without getting the stuffing beaten out of you. There are relics and monsters that cannot be bribed, indicated by a lack of a sum when bringing up the calculator.
Battle itself feels solid, but there isn’t a good enough knockback or stun to help you prevent yourself from being surrounded or stun-locked yourself. Running in circles seems to be the best option, but as many relics and monsters out range you, it’s not a viable option for long. Bribery can only take you so far due to its limited usage and the amount of G you have available to you.
When you’re not fighting out on the field, you’re managing your kingdom in the castle hub.
Workshop. Citizens make armor (changes money limit, adds attack, defense, and special skill) and Zengami statues. Requires materials (bribed monsters and relics) as well as G.
Control Center. A bestiary of what all you’ve bribed.Bribe monsters to expand.
Training center. Equip armor, develop your princess, and try out special skills. 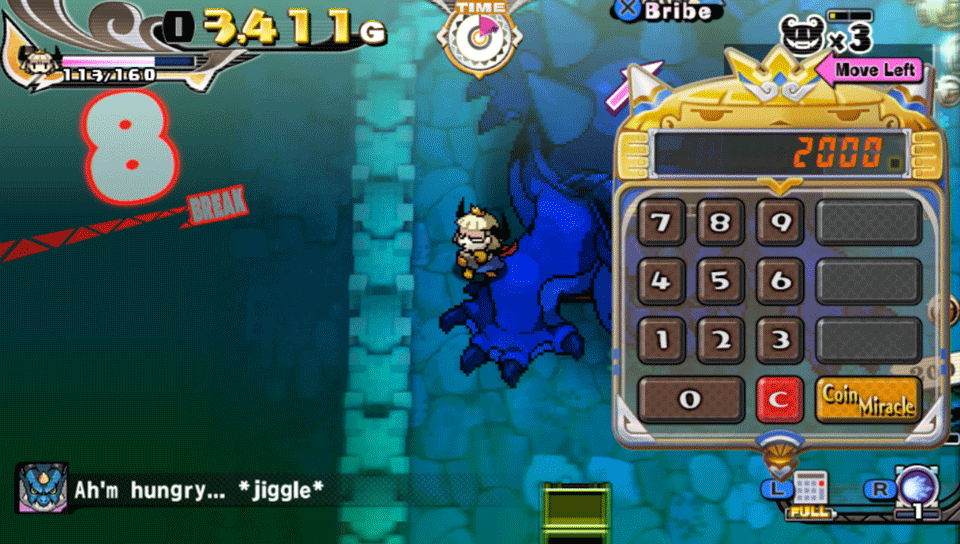 Progression is extremely grindy by nature. If you’re not willing to play the same handful of levels three, four times then you should probably avoid buying this game. You gain skill points from gathering or crafting statues and Clcrafting requires you to bribe a number of specific relics and monsters. You can also craft armour, which boosts your attack and defense as well as changes the special skill available for use.

Good, not great. Penny Punching Princess has the potential to be a solid brawler if progression was less grindy or even if the calculator gimmick was better executed. As it stands, the game can be very frustrating due to the flaws outlined in my review above. If you’re the patient type, however, things do get better once you’ve upgraded the princess and her equipment, but the question is: are you willing to invest the time needed and brawl your way through frustration?