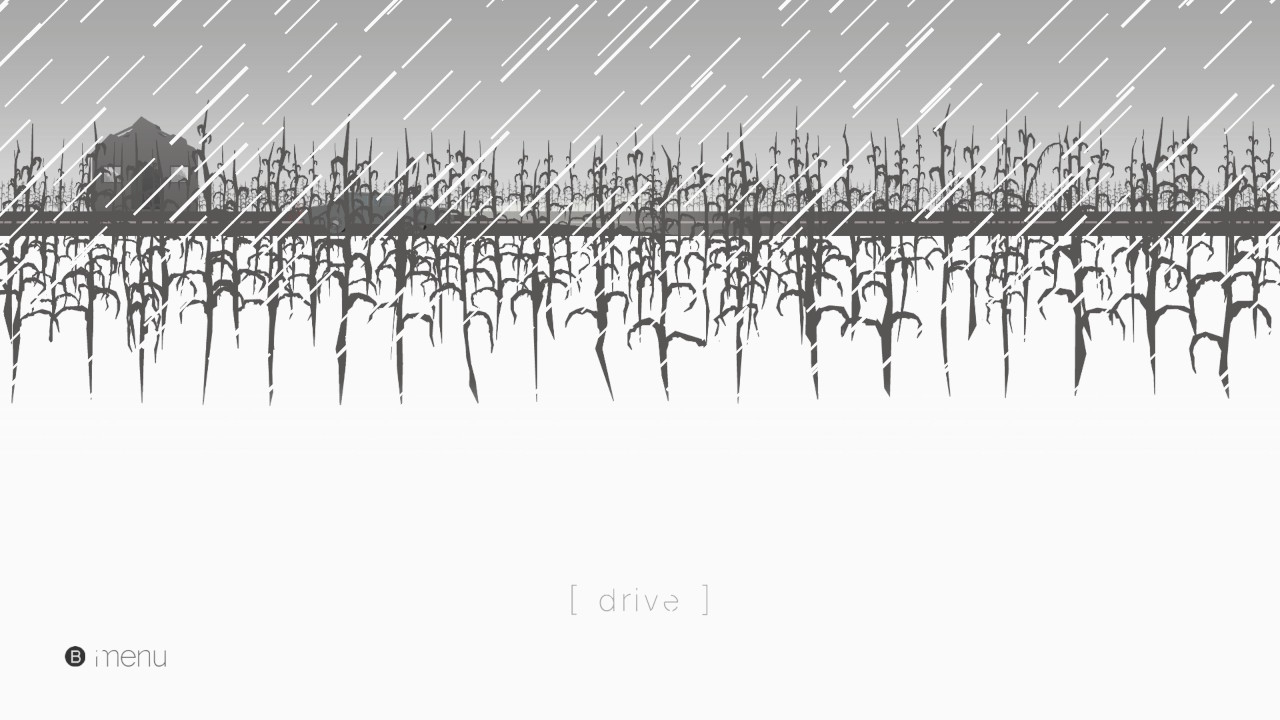 Visual novels are always a tricky genre to dissect and get into, especially when someone isn’t inherently a fan of the type. Moreover, visual novels are even more difficult to analyze when they’re purposely trying to buck the traditional setup. In theory, pushing the boundaries and creating a new way to play or interact with an otherwise static game would create a better and more memorable experience. But there can be a line that gets toed, and, on occasion, we go too far and create something that we remember not as a fantastic experience, but as an arduous situation. This is a bit of the give and take that brings us into Three Fourths Home: Extended Edition.

Without giving too much way, Three Fourths Home is the story of Kelly, a young woman who is driving home after taking some time out to privately reflect on her life. We don’t know what, but a lot has happened to Kelly recently, and she’s now back in her childhood house, and things are tense and not exactly where she’d like to be. The entire duration of the game takes place within the car, and is entirely based around a phone call to her mother, which rapidly turns into a whole gallery of characters. Kelly interacts with each member of her household through the phone, and choices of dialogue are made that help dictate the stones unturned about the path that lead us to where we are now. It’s difficult to say more without expressly spoiling the storyline, but, as any disenfranchised 20 something would know, moving back home when you don’t intend to is never a celebratory occasion.

Three Fourths Home is all about minimalism in presentation, and it works spectacularly in creating atmosphere and tension. Everything is done up in black and white, which, as a result, creates the impression of void and absence rather than simple color scheme. The way the rain whips across the screen, or the lonely sway of the cornfields Kelly must go through in order to get home, gives you this echo of a life, this shade of what things might be or could have been in her existence. As you drive, music plays in the background from the radio, and the player has the ability to fiddle around with it or turn it off entirely. Given that the dialogue is all text and not spoken, I highly recommend leaving on the music to really capture what Kelly is going through during this short drive home. 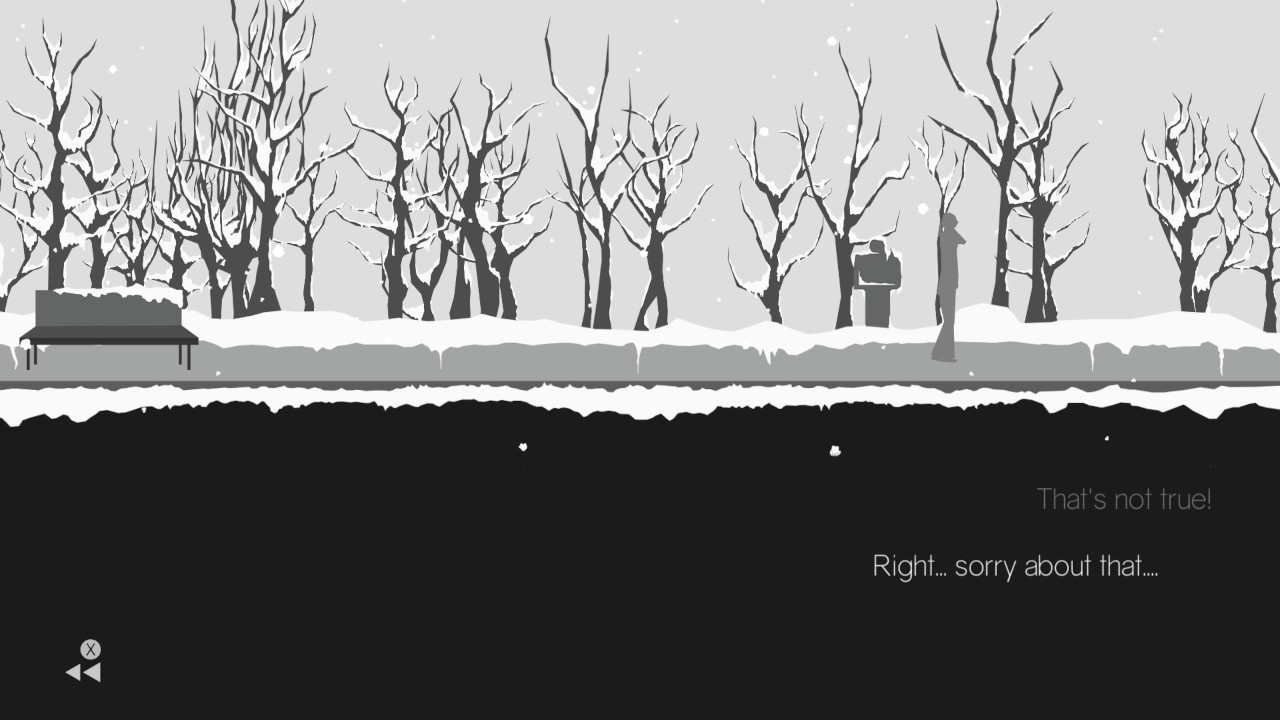 And the main storyline is short, I can’t emphasize that enough. Your first drive may take you close to an hour, but any returns to the game will net you maybe forty minutes at most. Some dialogue branches remain unchanged no matter what you say, and re-visiting to get as much information as possible gives a bit of satisfaction, but not a ton. That must be why the development team opted to create the Epilogue for players to go into once the game is finished. The Epilogue is a slightly different play style, created in the aftermath of the main story’s events, and gives much, much more meat and meaning to the game. The Epilogue, as a result, is a double-edged sword: it carves out more about what happened and what will happen, but it also adds tone and doubt to the perception of what Kelly’s life was like at home during the time before the storm. In the main story, the mother sounds a bit harried but still loving and supportive of her daughter. In the Epilogue, there’s a different feeling to it all, something that almost bridges on bitterness and disappointment. Then again, that could also be due to the choices I made for responses and lines. In any case, the Epilogue takes an already intriguing and saddening tale and catapults it to even more emotional heights.

However, much like Wheels of Aurelia, the devil is in the design, as the mechanics of Three Fourths Home take away from the overall storyline.  Now, don’t get me wrong: Kelly and her family are infinitely more engaging and interesting than Lella, simply because they’re so much more human. But the car framing device is something that has potential to work wonderfully and, instead, makes everything that much more of a chore. You have to hold down the ZR button for the entirety of the drive, as releasing the gas brings the car to a halt and, simultaneously, makes the conversation on the phone stop as well. The ZR is a pretty solid button, so your finger gets pretty damned tired after holding it for the duration of the twenty miles home. This is only intensified by the great use of HD rumble that’s been implemented. While HD rumble is normally a great thing, the tension of the thunder that shudders the JoyCons, combined with your exhausted fingers, makes it feel less fun and more like a chore to get through the latter half of the conversations. 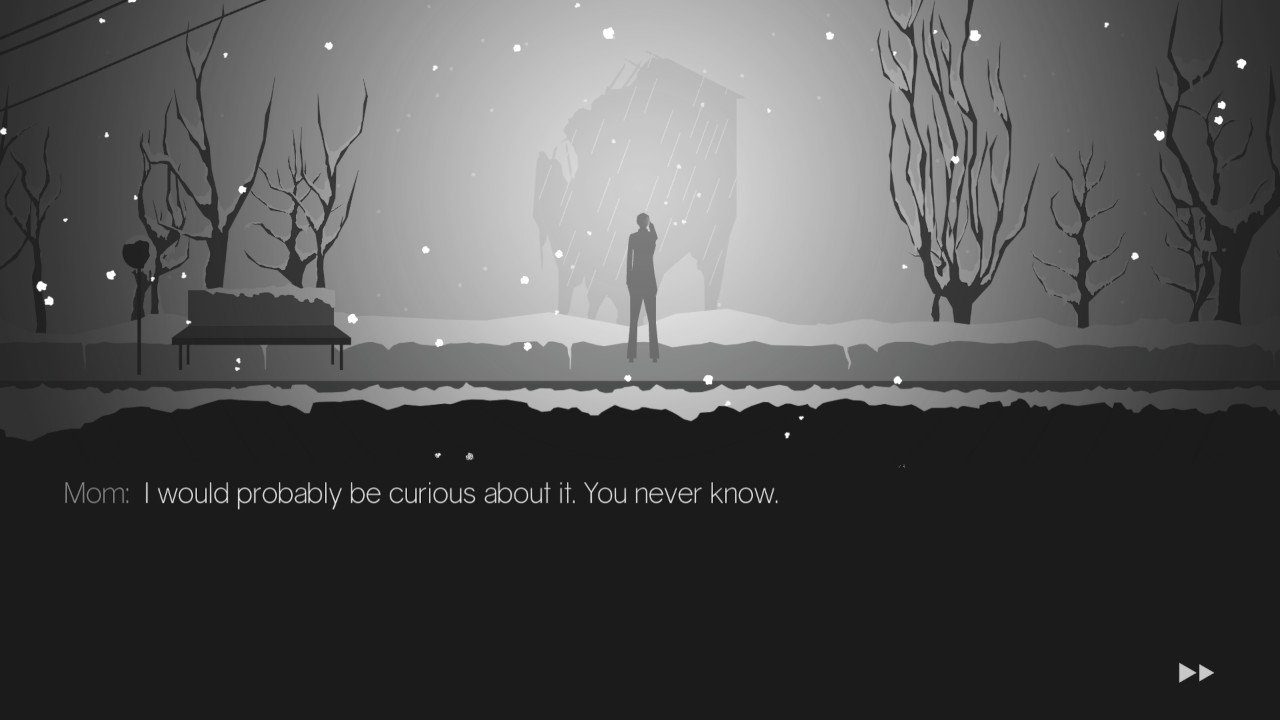 But this complaint stands in stark contrast to the truth of the matter: this is not meant to be a fun game. There is nothing fun about unpacking the different pains and mistakes that have befallen Kelly and her family, and it’s ridiculously interesting to choose the different ways that things played out in order to get the full(?) scope of what transpired. Maybe it’s meant to feel more difficult, almost painful, to keep the car going, because, even if you don’t already know the ending of this sad tale, you know that there isn’t some miracle fix for everything when Kelly does arrive. There’s no time machine, no spiritual awakening that repairs her parents and her brother, there is only life, in whatever chaotic, uncontrollable way it may come. So the pressure on your finger is almost like the weight on Kelly’s shoulders, so you release it, for just a moment, and everything screeches to a halt. You can no more continue the conversation from a standstill than you can stop the oncoming storm or stop the series of events that have already been set into motion.

Visual novels are often about the story and the feeling that they leave behind. Too often, we get visual novels and dating sims mixed up because the line has been blurred a bit by fans and certain distributors. But, make no mistake, [bracket] games has created a snapshot here of a life that twists and curls in the wind and is unmistakably beautiful and cruel.  It may not be the longest read, but it’s got a pull to it that makes you want to keep driving. The dialogue is completely human, the background is relatable and, for some, eerily poignant, and the whole thing is really brought together by how the Switch delivers the vehicle. Feel the thunder shudder your car. Allow the pressure of the gas to overwhelm you and beg you to stop. But stopping won’t end the story. Stopping won’t get you resolution. And, after all, there’s just a short distance more till we arrive home.