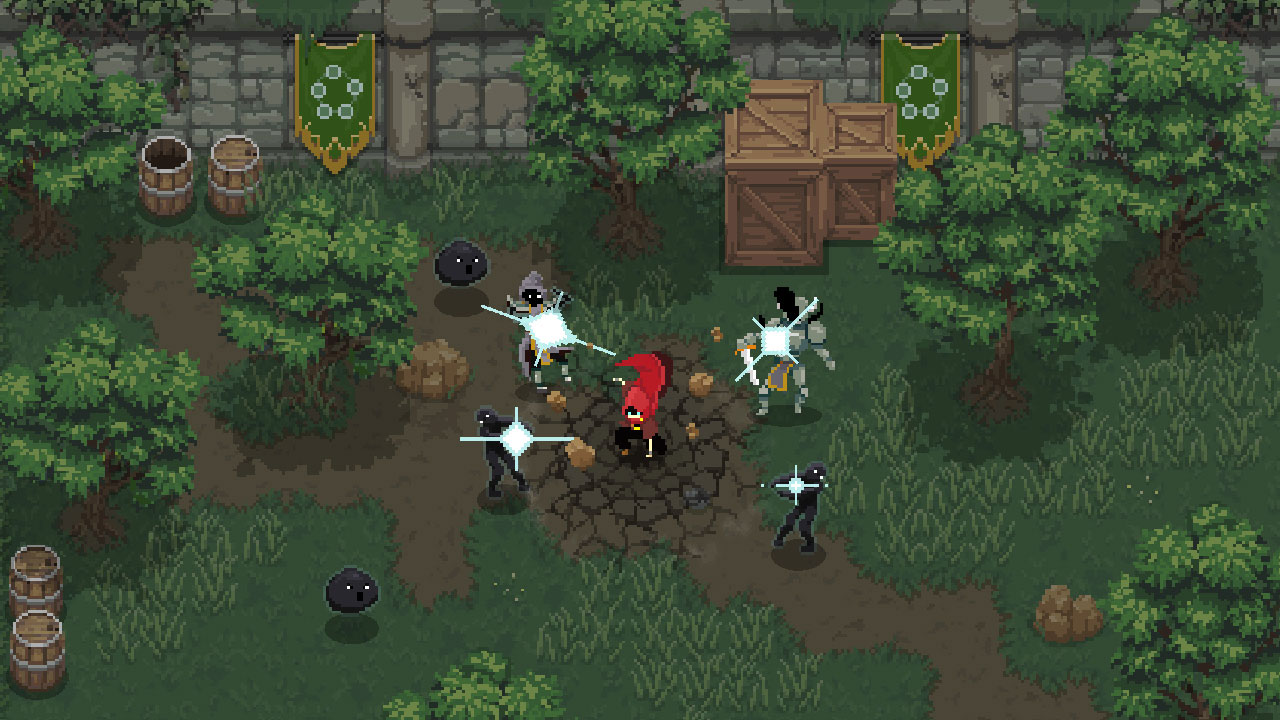 Skipping all preamble as I normally inject into my reviews, Wizard of Legend is the newest roguelike to land on the Switch, and, more importantly, it’s seeing a simultaneous release for the PC. This is really impressive, as it’s the first release from two-person development team Contingent99, who had a bit of help from a little publisher called Humble Bundle. But this is also really cool because this isn’t another indie that’s now getting a Switch port so every AAA snob out there can mutter about Nintendo being doomed and the Switch being a fad. But does the game deserve the acclaim? Aside from a couple minor issues, I’m gonna have to say yes.

Set in the Kingdom of Lanova, magic is a real thing that many wannabe wizards aspire to gain but have little control over. The Council of Magic selects people at random to come and participate in their Chaos Trials to see who is worthy of holding real magic, and, lucky you, you get yanked out of a museum tour and set on course to participate. Assisted by what looks like talking furniture from Beauty and the Beast, the Trials are dangerous but not deadly, and you’ll have unlimited chances to try and defeat the three Grandwizards on their home turfs. Mixing magic and might with skill and luck to overcome the odds, will you have what it takes to become a Wizard of Legend?

The pixel graphics are certainly something to write home about, and the music is an absolutely sweeping and enthralling score. If you haven’t quite picked up on the tone yet, Wizard of Legend feels like a madman’s interpretation of what Hogwarts could be like if every day was the Triwizard Tournament and Professor McGonagall doesn’t give a shit if you’re the chosen one or not. The music and graphics match that idea, with each stage and event being paired with stunningly designed landscapes, monsters, items and ambience. From the heavy tones in the Earth world to the ominous, foreboding darkness of the minibosses, Contingent99 took the time and effort to craft a game that sounds and looks as great as it plays. The pixel graphics in particular stood out to me: it’s like the best parts of Titan Souls and Superbrothers mashed together and then given a denser, more colorful treatment. One thing that kind of irked me in a funny way is our protagonist(s): the whole attire reminds me a ton of Bobbin Threadbare from Loom, and that dude did some decent magic, but nothing too extravagant. If it turns out to be a purposeful nod, then I redact my comment. 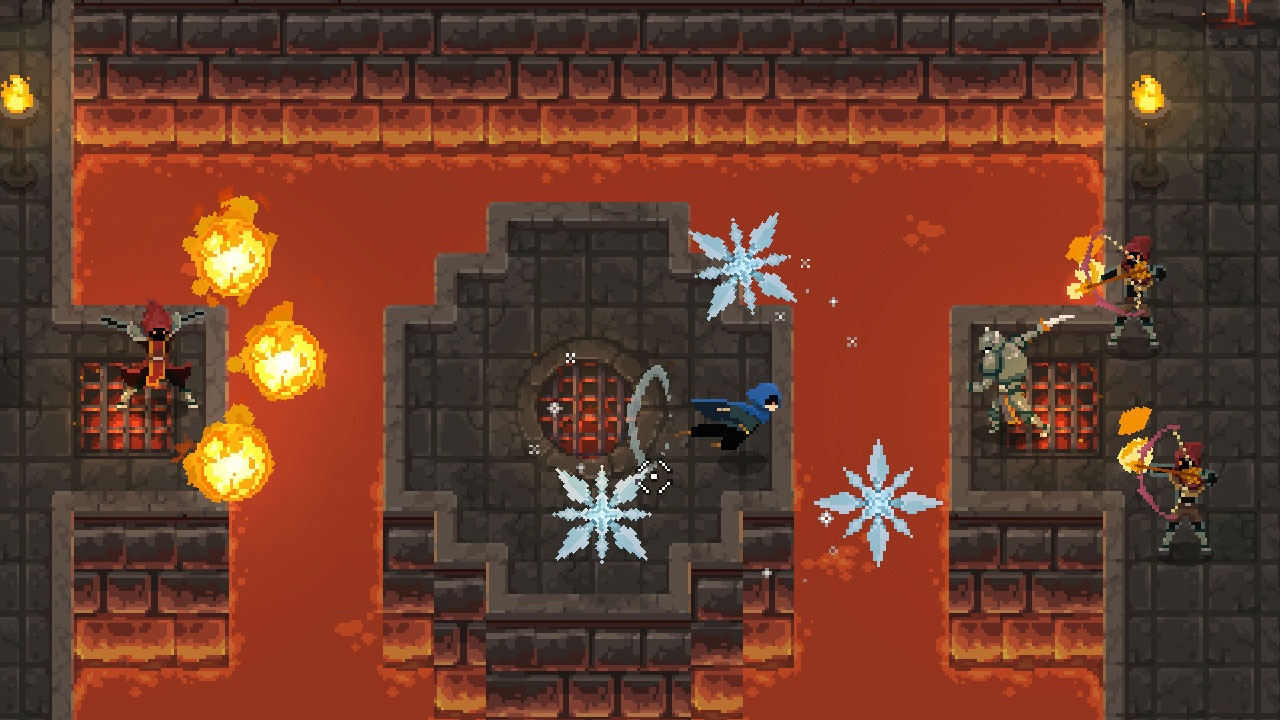 Wizard of Legend likes to mix close and ranged combat in equal and beautiful parts, and this is a system that works wonderfully for a majority of the time. Even the early spells you get give you a good amount of versatility in how to handle each of the mobs and bosses that you will run into. You fall into the elemental game of rock paper scissors, making sure to either hedge your bets with one faction or divide your spell slots across multiple types (the wind and electricity spells are good bets for any beast, save the stupid rock golems). Each enemy also has their own shortcomings that you discover through trial and error, so you might pack different spells depending on what you think you might see. A frost spell could work wonders if the grunts are susceptible, but you also may consider something like a good chain lightning to paralyze more humanoid dudes. Speed versus damage, range versus accuracy, it’s all a great give and take, a level of customization that you gotta work out in order to get all the way to the end. Even the great world bosses have patterns that can be dismantled with patience and the proper spells, so fingers crossed at having the right setup from the beginning or discovering the best pickups to make it to the end.

Now, as much as I enjoy the combat and layout, there are some inherent pitfalls to the game, and I mean this literally. Most of the rooms are laden with holes that serve as deterrents for running away, but they also act as the biggest unbalancing act in the whole combat scene. When you’re not paying attention or, more likely, are focused on the herds of archers/lancers/faceless monsters charging at you, you’re pretty likely to accidentally fall down a hole mid dash and take a sizable damage hit. In the same breath, you also realize that you don’t need to figure out great strategy and elemental weaknesses as long as you have an attack that gives you a big enough hit to knock the enemies into said pits, where they do not respawn AND you still get the coins and gems they drop. This seems like a bit of a broken system, but I’m not one to argue against something that’s helped me out more than hurt me. However, the landscape is also a massive problem in terms of vision. The fire and ice worlds all have the occasional statues, which will block a bit of your view, no big deal. Earth world, on the other hand, is usually sprawling with colorful trees that, while they can be knocked over in one hit, will still jam up your whole day in the meantime, because, hint, the AI doesn’t care about them. They’ll hide in the trees and snipe your ass down a couple hundred hitpoints before you’ve cleared enough of a viewline to actually strike back. The solution, sadly, is to forego any of the clever action combinations you’ve developed up to this point and just mash the basic attack wildly until you’ve cleared enough of a line of sight. Not pretty.

The roguelite elements of Wizard of Legend are both the ultimate attraction and fatal step in this game’s overall appeal. Since the game is completely randomized in its path towards completing the Chaos Trials, a player has to really, really hedge their bets when starting up a new run in the dungeon. The three Grandwizards, who each have elemental strengths (water/ice, fire and earth) act as shuffled junctures for each of the legs of the trial. In order to get even a decent distance, you must stack the spells of your choosing in the right order: freezing spells work wonders against earth enemies and even moreso with fire soldiers, but they deal less damage and rarely enact the freeze penalty vs. the blue servants. So when you hedge your bets on a certain element as your cornerstone and it pays off, you feel like a God and can really rampage through the stages on your way to the boss wizard. But, when you’re on the receiving end of the beating stick, your death is quick, painful, and borderline embarrassing. 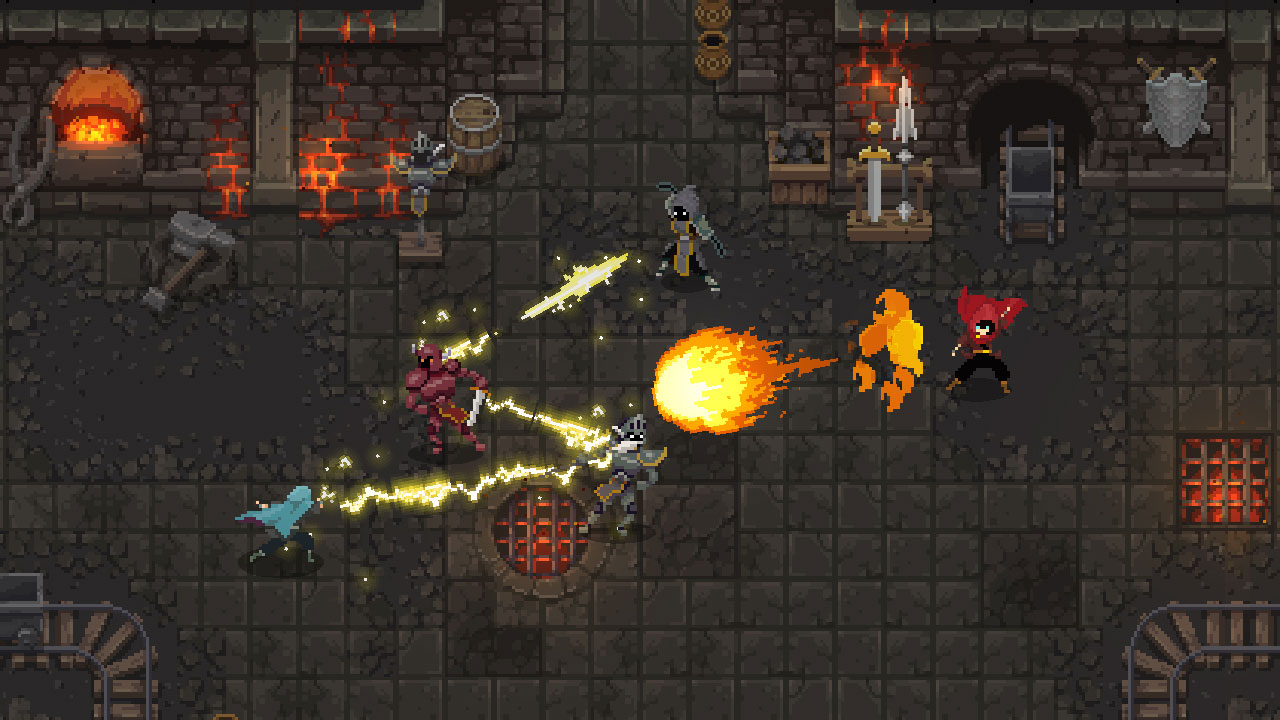 But those same roguelike elements also mean that you don’t HAVE to invest in a single element. Between the one hundred gems you get as a starting bonus, the decent number of drops from enemies and the delicious bonuses you get from defeating the mini bosses at the end of each stage, you’ll suddenly have a pretty well rounded arsenal of spells, relics and other acrutremons in like three runs. And holy crap, are there a LOT of different items to pick up. It’s so frustrating that you can only equip one relic at the beginning, because there are SO MANY wonderful things that I would have loved to stack, one on top of another, to become the very best. Still, the dungeons themselves provide plenty of pickups and purchases a la Binding of Isaac to make things interesting. Items that you buy, spells that you find in chests, and certain temporary relics that help you…for a price. It’s a whole new level of exciting to find these things because other roguelites tend to have a level that you build towards and then kind of coast from there. Once you’ve unlocked everything, the likelihood of being overpowered tends to be quite high. In Wizard of Legend, however, you have the chance to get to find and experiment with all these new items for the first time, and there’s no wiki or careful template laid out to let you know everything that’s going to happen with each combination. For speedrunners, maybe that’s a bit troublesome, but, as a rougelike enthusiast, these new, complex systems are like discovering a new land: exciting, if terrifying.

As either a solo adventure or a surprisingly cohesive co-op mission, Wizard of Legend poses the same thrills and enjoyments that the great roguelike adventures of our time present. A solid base, plenty of replay value, and tons of variants in the hows and whys of playing. The likelihood is that this game is going to garner a pretty solid fan base dedicated to seeing how fast, hard and ridiculously they’ll be able to quest and achieve glory in the Chaos Trials. It’s good to see Humble Bundle deciding to help publish some games onto the Switch, and, if this is a sign of what’s to come, I’m very excited to see the future for both Wizard of Legend and the Switch’s roguelike haven of gaming.