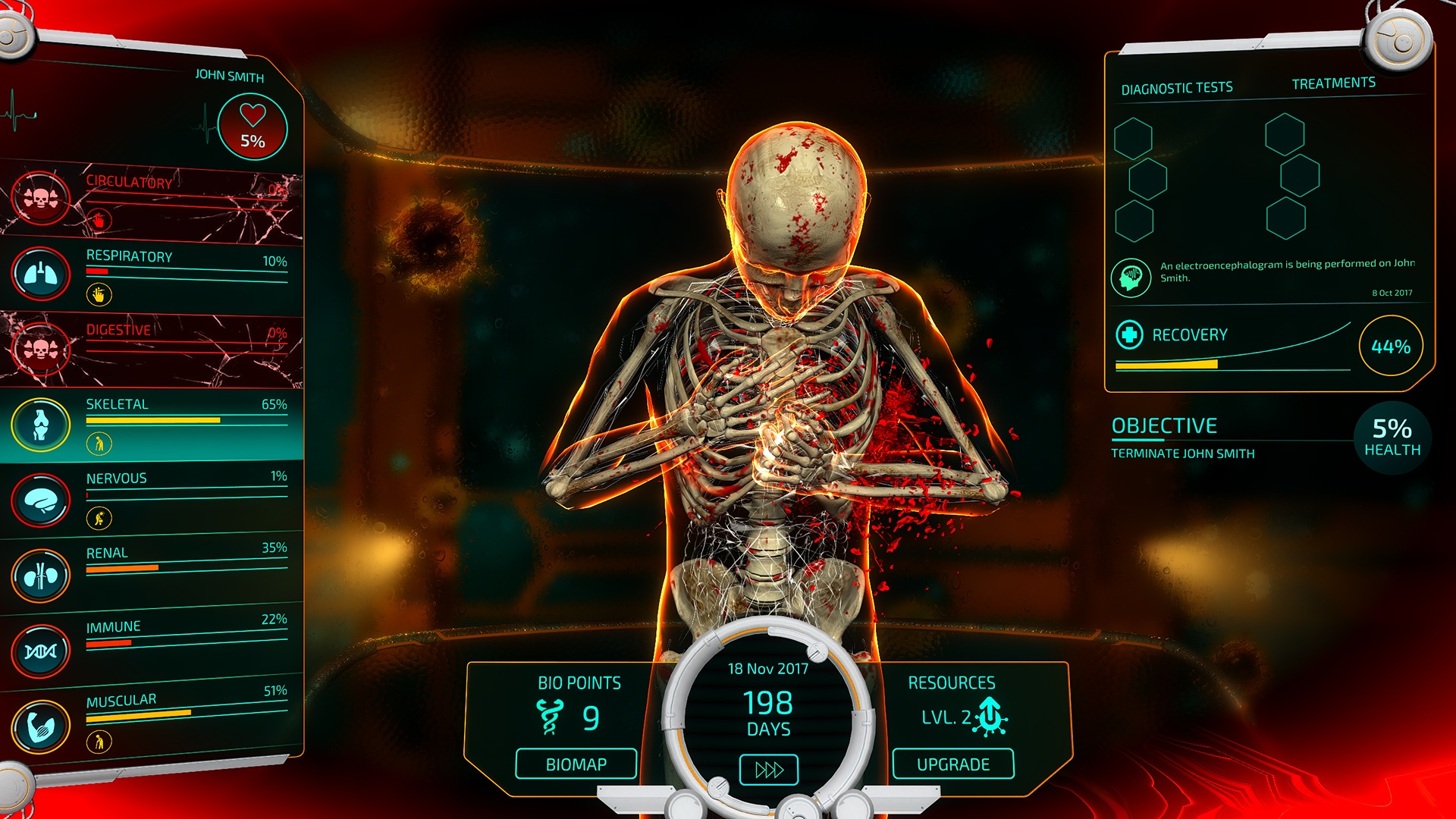 Bio Inc. Redemption is a one of a kind. It’s a game where you play as a doctor, and it’s also a game where you can go down two really opposite paths. In essence, it’s a medical simulator where you make decisions in order to save or kill your patient.

The game offers two main campaigns, which I’d advise to play first before you delve into the game’s sandbox mode or online PvP. These main campaigns are Life and Death, where you can choose if you want to play the game with the objective of doing your best to save your patient, or if you want to satisfy your dark side and find the cruelest and gruesome ways to eliminate your victims.

Each campaign is divided into several chapters, which correspond to different degrees of complexity in terms of the patients that you’re dealing with. In case of the Life campaign, you start as an intern and climb your way up to an Intensive Care Unit, while on the Death campaign you start dealing with healthy patients, and then you end up dealing with those that are terminally ill. However, each chapter is comprised of three levels, and you have to complete levels on specific difficulties in order to gain enough points to unlock the next level or chapter, you can’t just beat everything in the easiest or standard difficulty setting, you have to challenge yourself. 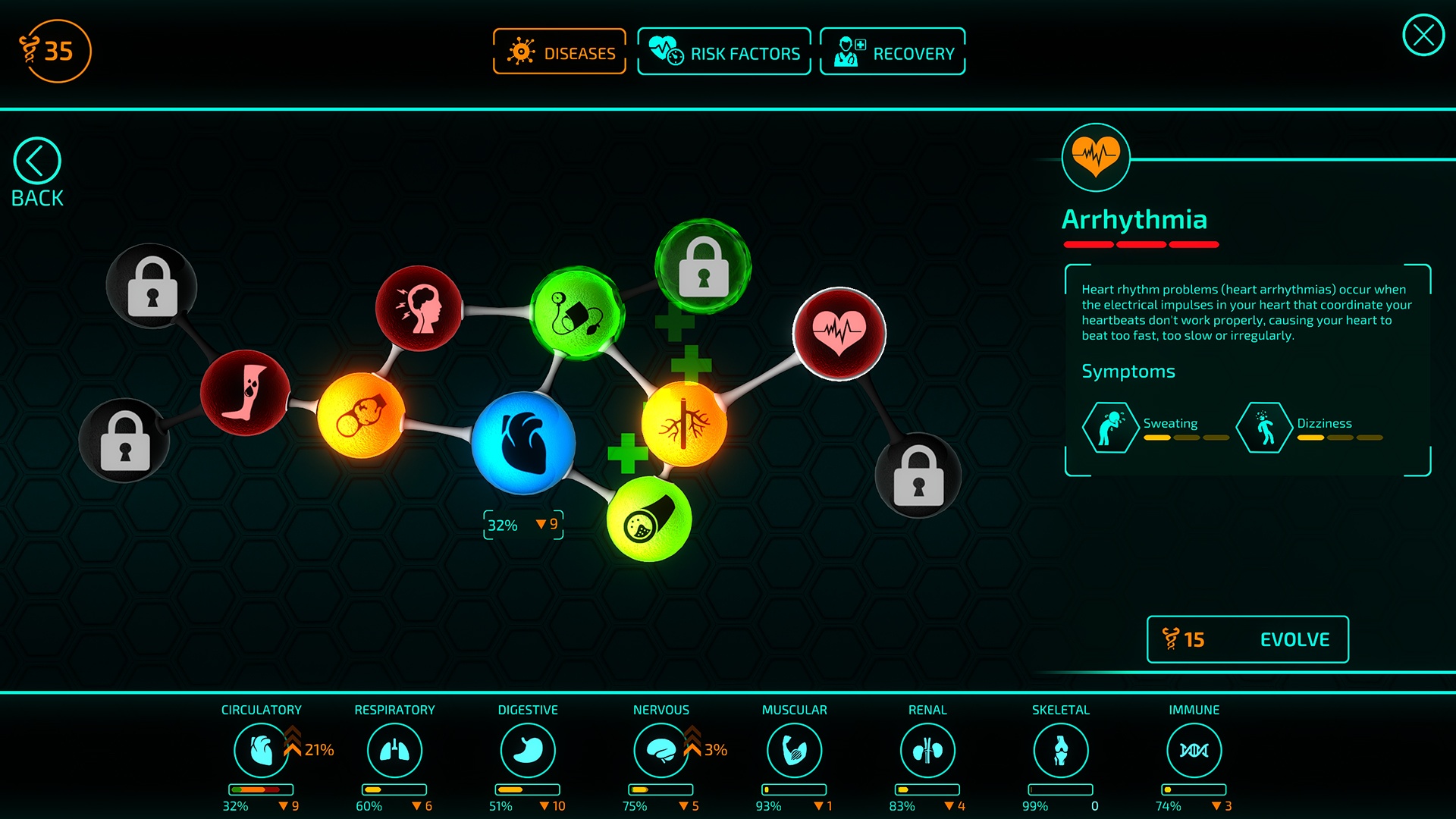 While these are two very different ways of playing the game in theory, in action they’re quite similar to each other. As soon as you start the game, you’ll be able to see the patient’s overall health and individual body systems, such as circulatory, respiratory, immune and skeletal, as well as their corresponding state. Here, the game revolves around keeping an eye out on your patient and clicking every time Bio Points pop up in the screen, which you can then use to either diagnose and treat the patient’s ailments or to upgrade diseases in order to kill him in case you’re playing as the baddie.

The other main part of the game is represented in this sort of map where all the patient’s systems are linked to several symptoms and diseases. In the case of the Life campaign, initially, you don’t really know what disease your patient has, you have to find that out by investigating their symptoms and looking for a common link between all of them. Once you’ve figured that out, it’s time to pass onto the clinical trials in order to confirm your suspicions by diagnosing the right disease. After this point, once you’ve figured out what you’re dealing with, it comes the time to assign some type of treatment to the patient in order to cure them. You can also influence the patient’s lifestyle in order to improve their medical state, as well as opt for some radical treatments in order to boost each of the patient’s systems status.

On the other hand, on the Death campaign, you’re pretty much doing the exact opposite of I’ve mentioned above. The way you complete each level here is by introducing diseases into the patient’s body, try to confuse the doctors by assigning different types of symptoms, as well as induce the patient so that it opts for bad life choices, such as smoking or eating tons of fast food. It doesn’t matter if you’re saving lives or putting an end to them, as the way that these mechanics work is pretty much the same. Performing all these tasks requires Bio Points, some more than others, so there is some room to play around with if you’re lacking in points, as there are over 600 types of treatments, diseases, symptoms, and other sorts of medical jargon. Every single one of these also doesn’t have a 100% chance of being successful, no matter which side you’re on, some are expensive and are more likely to be effective methods, while others are cheaper and can take longer or might even fail. In these cases, it’s up to the player to decide if it’s worth the risk. 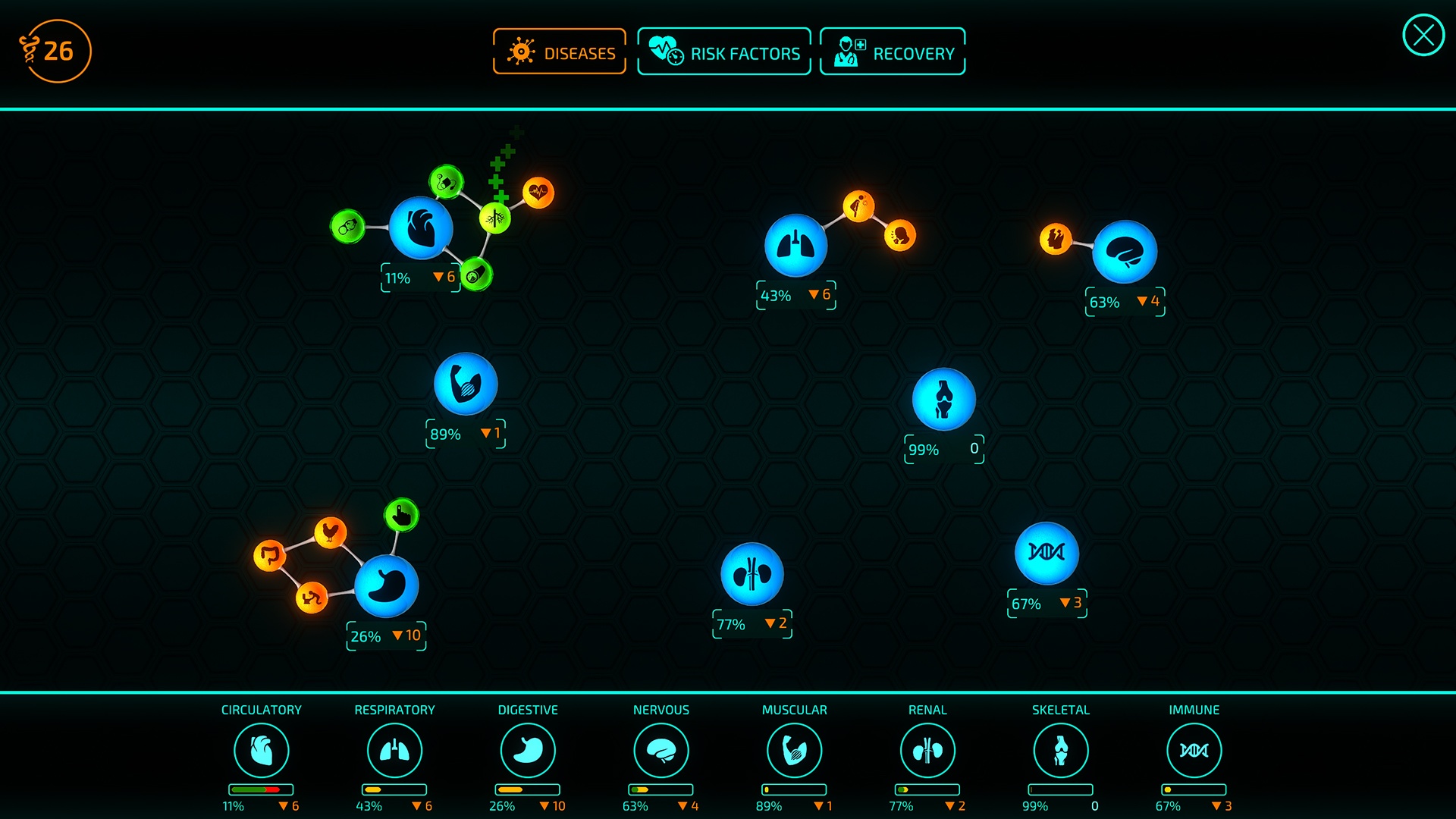 The game is definitely challenging, with the difficulty rising gradually as you gain access to more levels. The objective changes from level to level, so you’re not always trying to kill or save the patient. One time you might just be trying to diagnose all the diseases that the patient has, while another time you’re just trying to keep him alive for as long as possible. Despite the fact that the game keeps getting more difficult, you do gain experience and points which you can allocate to boosts before each level, so there is some element of progression which helps you make through levels where you previously couldn’t.

Nonetheless, the game really makes you feel frustrated when you can’t figure out what’s wrong with some person, or when you were so close finally finishing someone off. Also, if you’re into score attack games and competing for your place on leaderboards, this game also has that going for it. The game did have these random freezes every now and then that seemed to happen for no reason at all, but other than that, while the game is certainly fun and challenging, it could really use more engaging gameplay mechanics, because most of the time all that you’re doing is looking at the screen. With that said, if the idea of saving people, or trying to exploit someone’s immune systems against themselves sounds appealing, Bio Inc. Redemption is definitely worth a shot.