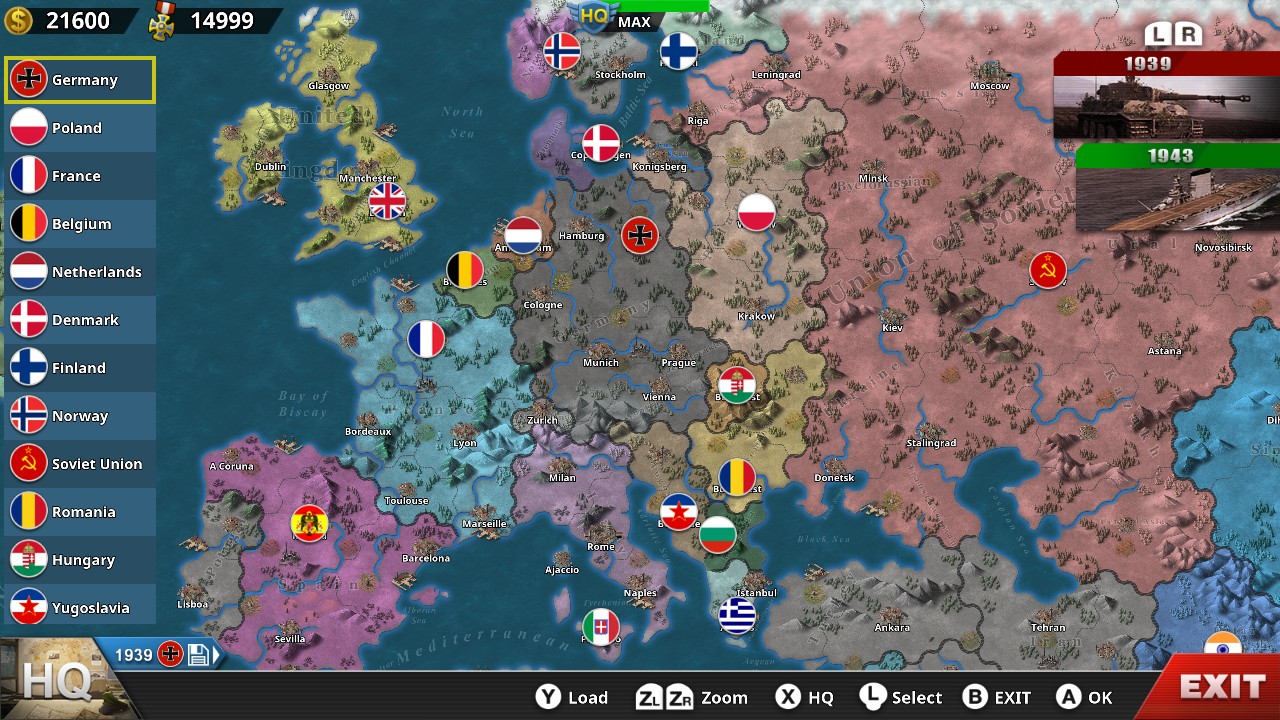 War is rarely any fun, unless you’re an armchair general who is sat in front of a PC or console, playing one of the many tactical war games currently available, in order to test your abilities in strategic movements or decisions. Although more prevalent and immediately associated with PC gaming, this is a genre that has also spawned some iterations on console bases, with titles such as Advance Wars and Drive on Moscow. However, you can’t argue that these games come in a thin line of defence on these platforms; particularly so on the Nintendo Switch.

Well, you can fret no more as World Conqueror X, a tactical wargame developed by Easytech with publishing from CIRCLE Entertainment, has marched onto Nintendo’s console to give the most battle-hardened amongst us a good test of our mettle. The style and mechanics of this game follows in the same style as many titles before it; selecting units and moving them along a hexagonal grid until contact is made and battle ensues. A lot of Nintendo players will be familiar with the aforementioned Advanced Wars series, as will 3DS players who may have played one of the earlier titles from this series, making this is a title that will be instantly familiar in some of the ways in which it works. However, World Conqueror contains a lot more depth and technicalities; albeit not quite on the same level as its PC counterparts.

The game presents you with two options of play: Scenario Mode and Conquest. The first of these offers a series of battles that span the European and Pacific conflicts of World War II, leading up to the modernity of the Cold War. These historic battles are based around real-life key events and contain forty different scenarios that covers both sides of the conflict. These bite-sized skirmishes offer a perfect setting for casual players, with each battle often taking around twenty or less turns in order to achieve victory. The objectives for these vary from mission to mission covering a range of activities that involve taking control of a certain city, or cities, repelling an advancing assault on your position or just holding on for dear life as you try to survive against the odds as you wait for reinforcements. 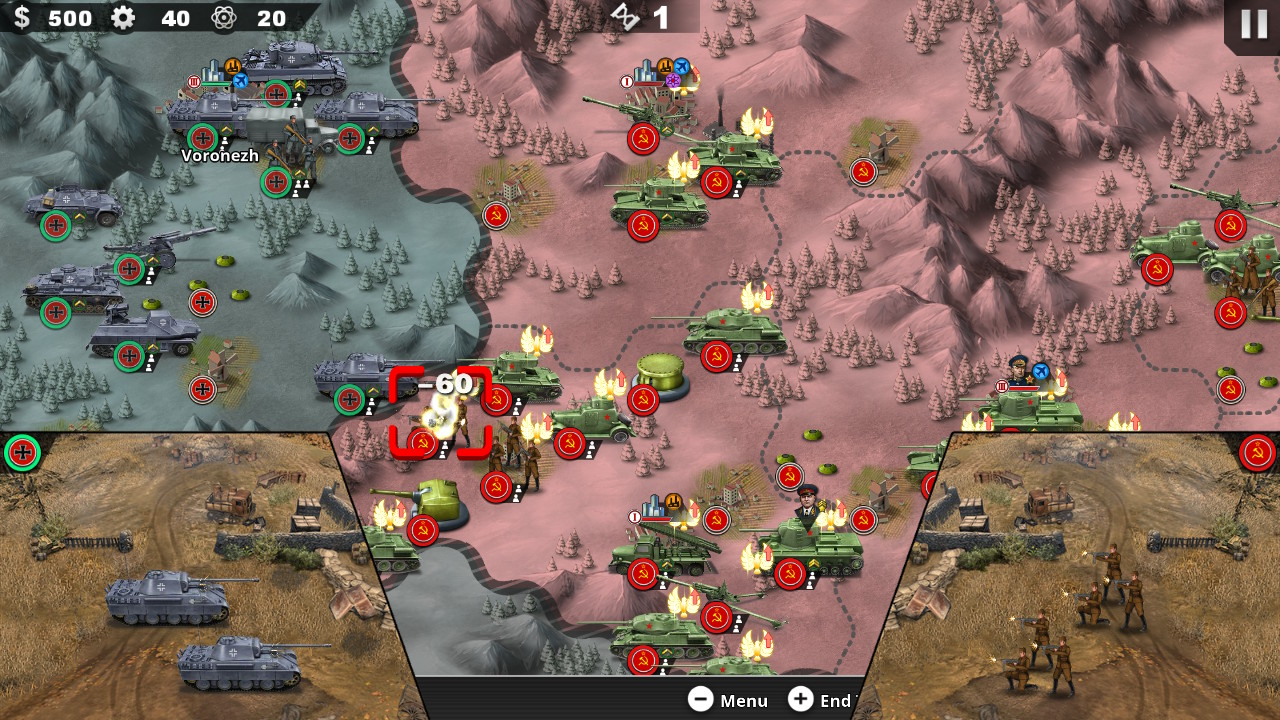 This variation in battles, tactics and strategies helps to keep things fresh and the length of each battle creates a steady flow to keep you suitably entertained. As well as the select-and-move mechanic of the gameplay, World Conqueror X also contains a plethora of options to keep you on your toes during the heat of battle. Morale plays a pivotal role in the well-being of your army, as well as the demoralisation of the enemy. Find yourself surrounded and against the odds, then your troops’ defence will drastically lower and vice versa. However, the more victories your troops partake in, the higher their morale and attack capabilities. It adds an interesting perspective to the battlefield, as well a number of other factors that can help the cause.

As you gain ground and take over control of towns, cities and installations, your war-funding increases allowing you to hire generals, which greatly enhance the units that they are assigned to, build extra units and battalions, erect landmarks to bolster morale or create an advantage on the battlefield and research towards strengthening your arsenal that range from infantry up to nuclear deployment. These extra features add a layer of real depth to the gameplay, but is executed in a way that it never feels over-complicated or out of your control.

The mainstay of World Conqueror X though, comes in the form of its Conquest mode. This offers a direct contrast to the bite-sized skirmishes of the Scenario Mode, as the objective here is in world domination. You select a single country from a whole host of heavy-hitters to smaller states and starting in either 1939 or 1943, embark on a quest to take over the whole world. Whatever country you decide to play as, it historically-correct allies will join with you as you battle on a number of fronts. The mechanics of this game mode remain the same, however this mode also introduces some further options such as limited diplomacy by funding your allies or drawing new opponents into the conflict. The scale of warfare within this mode is absolutely staggering; think of the board game Risk on steroids and your halfway there. It’s not an overly-complicated mode, or becomes too much to handle, but it does an extraordinary job of bringing the enormities of war on a global scale. 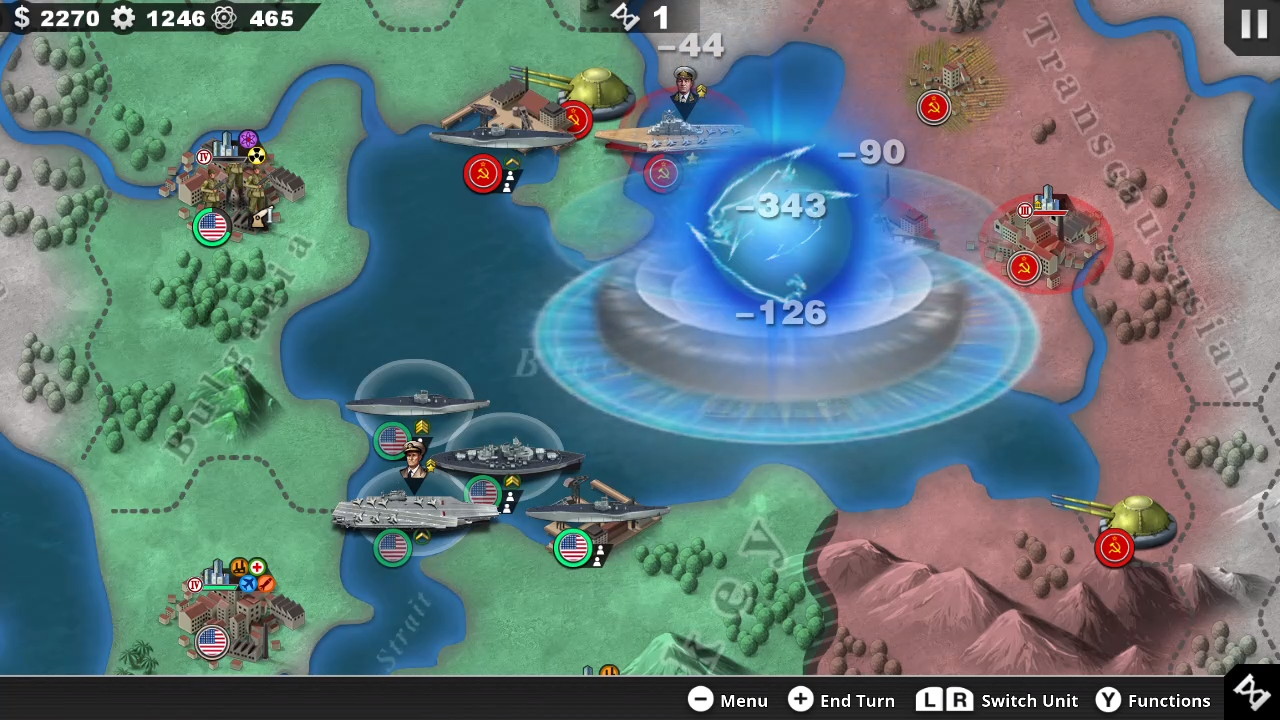 It’s an exhilarating experience that requires the most dextrous of strategic planning and is also a mode that provides absolutely hours of entertainment. With its ability to save on-the-fly, both modes offer a lot of depth and content that can easily be played at any time; especially with the handheld capabilities of the switch. Unfortunately though, the game does also contain a few issues, but nothing that is potentially a deal-breaker.

The game offers a tutorial mode that explains its many functions, but only in a basic form. It’s enough to get you started, but to get into the real nitty-gritty of its mechanics and, subsequently, to achieve stunning victories, you have to invest some time with experimentation to fully understand how the game works. It easily takes a few missions to learn all of the mechanics, but once you have them figured out, propels the game to a higher plane in terms of pure tactical fun and entertainment. It also falls slightly short on some of the statistical information on units, which for a game that works on this mechanic seems like a strange omission. Despite these shortfalls, this isn’t a game that is hard to learn; although it can prove difficult to master, especially as you progress further into the varying scenarios and take on world domination.

Overall, World Conqueror X is a welcome addition the Switch’s library, especially if you’re a fan of tactical wargames or a budding armchair general. It fills the void of this genre nicely and offers a huge game with endless replayability for a paltry price; its presentation and playability can easily outdo a game that can cost four or five times as much as this one. This version of the game has come a long way since it’s 3D skirmishes on Nintendo’s other hand-held console and with full pro controller support , as well as a touch-screen screen capability, offers the most definitive version of the games’ series to date. Whatever mode you play in, its battles are suitably complex with units that fight on all fronts over the land, sea and air. If you’re itching for a real tactical experience on the Switch, then this is a title that will deliver that experience in buckets-full. However, be warned, this is a title that requires time and effort and the more you put into it, then the more it will give back. In terms of strategy and tactical warfare, this title is an absolute delight in revelling in the fun that can be had from armchair warfare.