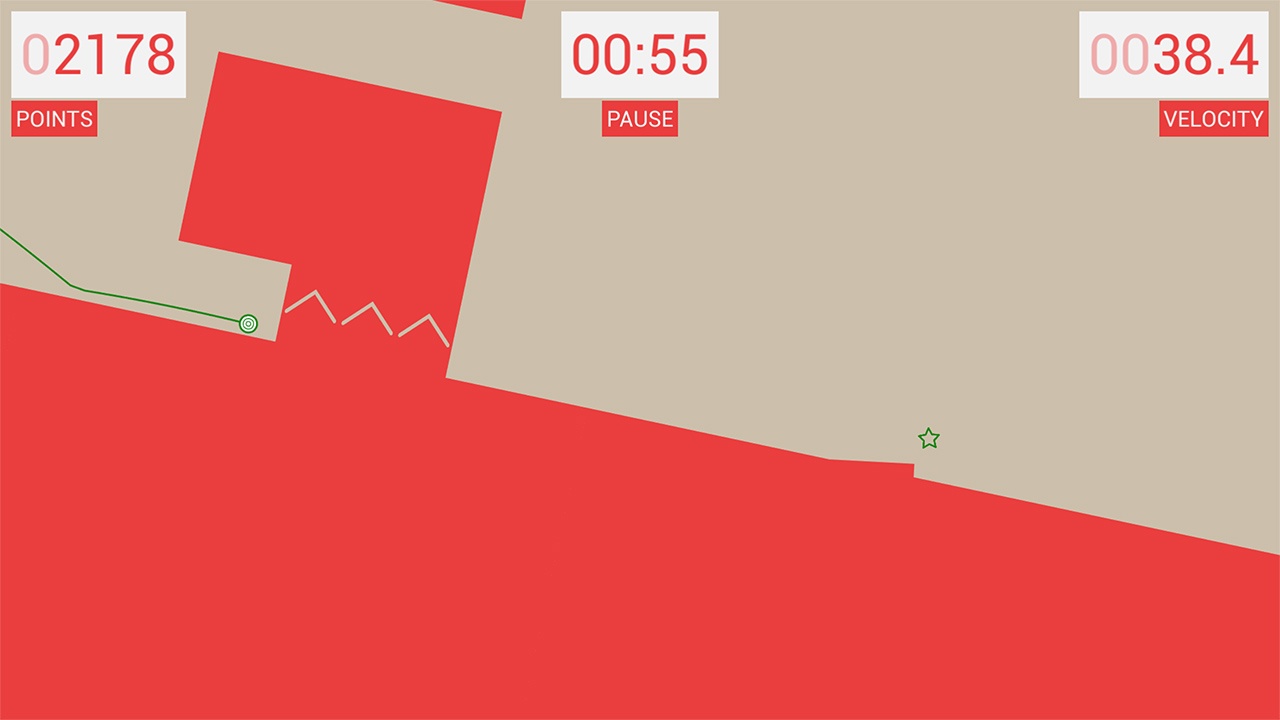 We, as Switch enthusiasts, have to accept that not every game on the eShop is going to be top shelf. I know it’s been said (by me) several times over, but it bears repeating when there’s almost nothing unique, interesting or captivating about a game, yet there also isn’t a problem with it. My umbrage generally comes from games that are completely broken, overpriced or a combination of the two. But my displeasure from Never Stop doesn’t come from either factor, I was simply…bored.

Never Stop is an endless scroller in which you play a colored circle that can jump, double jump, triple jump (on occasion) and slam down. You have no features to speak of, and the landscape is generally a barren place save for some colorful interference in the guise of irregular terrain. As you may have guessed from the name, the objective is to never stop: roll as long and as far as you can. Along the way, you may pick up some powerups, such as the ability to see your jump arc for a short period of time, or to slow down time itself to make some precise jumps easier. Otherwise, the branding is spot on, and you shouldn’t stop for anything. 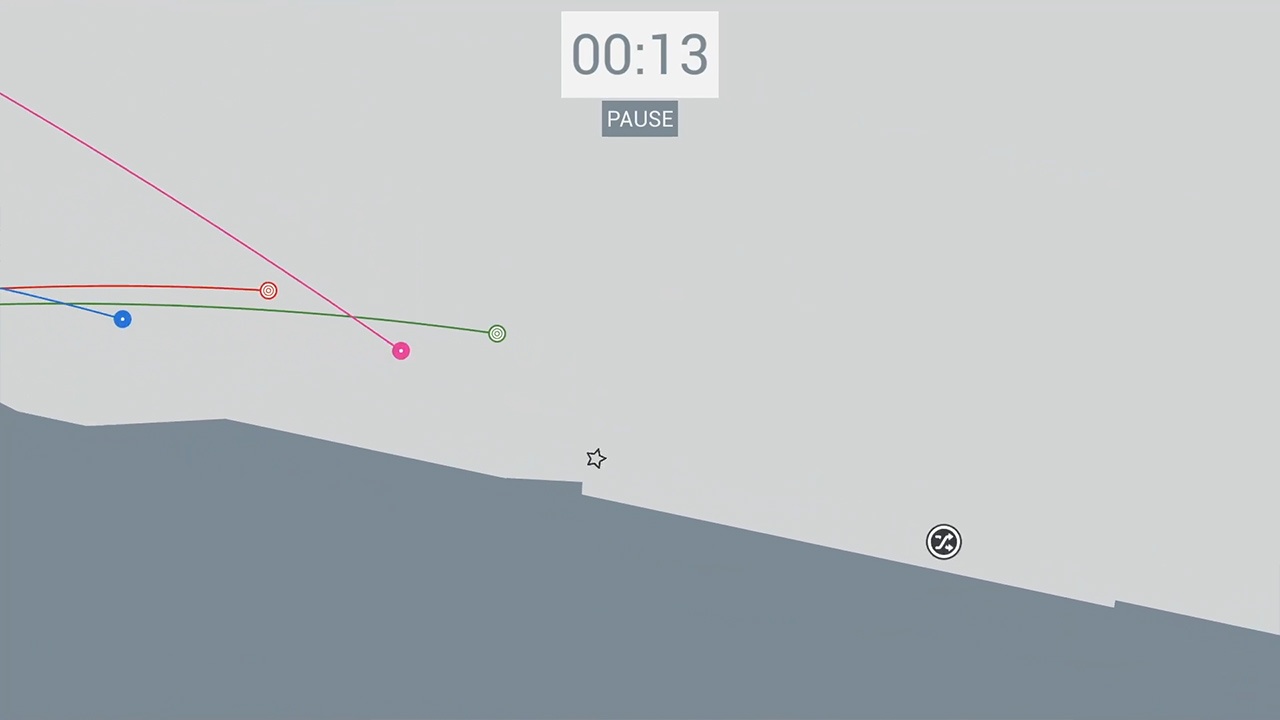 From the very beginning, Never Stop struck me as a game that inherently didn’t belong on the Switch, but I had a hard time thinking where else it could/should be. Sure, it doesn’t have a Nintendo IP tied to it, but the core idealism makes sense: a simple game that can also be enjoyed by multiple people. Oh yes, Never Stop has a multiplayer mode, in which up to four players can run against each other, and this is actually a not bad situation. Due to the simplicity of the design and presentation, you just need two JoyCon sets to do four players, because your buttons are the joystick and one shoulder button. Getting a bunch of people to run together is pretty fun, and literally anyone can figure out how to do it. Keep moving and do your best to win without totally screwing up. Which is harder than it sounds.

Never Stop is weirdly unforgiving with the way the worlds are designed. On the one hand, there are some breakaway columns that look like they could stop you, but only slow you down. On the other hand, if you touch a wall that’s sort of inclined and you think you could have rolled right off it, you’d be wrong and game over. There were a couple times when I assumed that I could keep moving or just shrug off some minor inconvenience, but it was a total loss. I didn’t care for the inconsistency, though I’m sure it made sense to the developers, Pixel/Split.

Speaking of “make sense to the devs,” why is the confirmation button the L trigger? I get it, when you’re running in the game, having that as a the button to trigger powerups makes sense. If you have the right Joycon, it’s more difficult to keep moving and then push a button instead of mashing the R trigger. But that’s only for multiplayer powerup activation. In single player mode, just to navigate the screen, you push the L button to confirm selections. That’s inherently nonintuitive, and I almost thought the damn game was broken because I couldn’t select anything. And, since there’s not a tutorial at the beginning (or ever), no one knows. The number of players who’ll be frustrated and confused when first starting up is going to be high, mark my words. 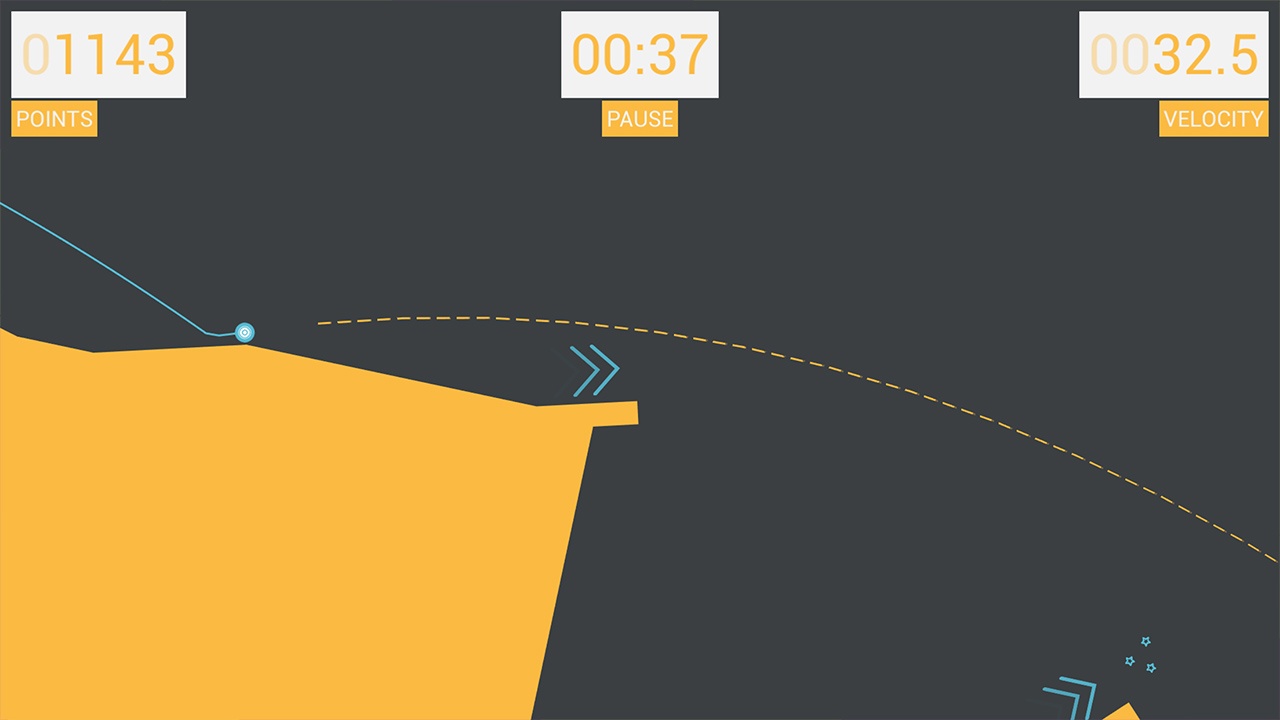 But if you can get past a couple of those niggling pains, the overall game isn’t unpleasant. You run, or roll, endlessly, and jump around and maybe play against some friends. You trigger powerups that affect all of you (like getting larger or suddenly speeding up) and keep going until you crash. Try for a high score that only displays locally, enjoy some repetitive but catchy music, and that’s about it. This is where I get hung up. Again, nothing horrifying happened, but nothing monumental or even memorable came out of this game. It’s bad enough that it was beaten to autocomplete months ago by Never Stop Sneakin’, but now it also has to stand on its own with a really mediocre and simple experience.

The verdict comes down to whether or not you have five bucks to spend on something else. If you have five dollars for anything else, then you should probably buy something else, be it food, a decorative hat, or a broken PS1 from a flea market that you might be able to fix. However, if you really just want something simple with a bit of replay value, then Never Stop isn’t the worst you could do, but it merely isn’t the worst.