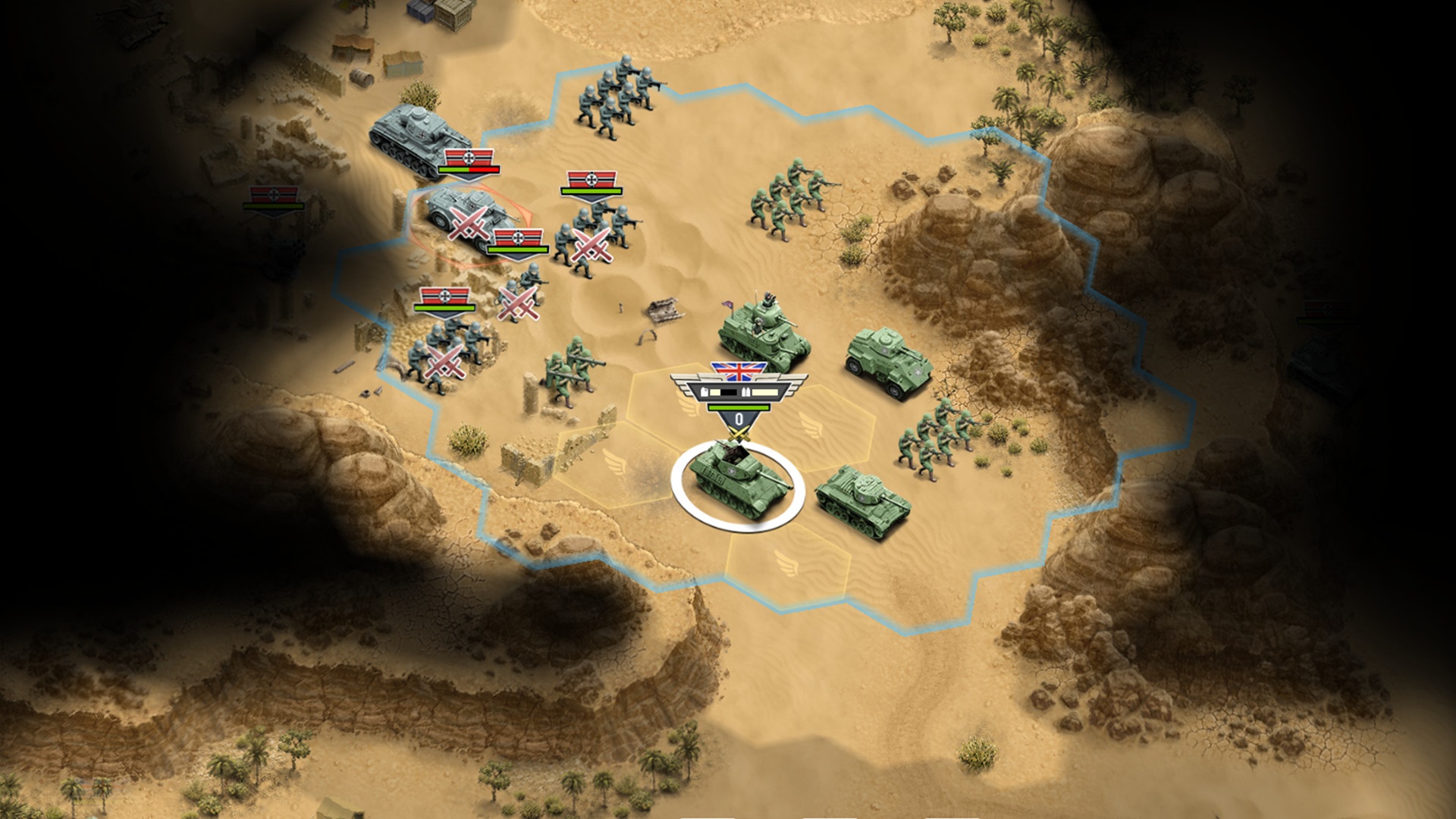 The Second World War has always had a strong lure for video games. The combination of ranged and close quarter combat conducted by a compact variety of units lends itself well to a strategy game. And so it is that 1943 Deadly Desert enters the fray with a turn-based strategy game set in the North African theatre of war with Allied and Axis powers going head-to-head on the desert sands. But is this a worthy addition to an already established genre or simply yet another game in a saturated market?

The initial interactions with the game interface reminded me of the military movements of the classic Civilization games. We have an isometric view and a fog of war shrouding all but the immediate vicinity of our units. Move around the map and the fog of war is gradually lifted as you seek out enemy units and find the best spot to pitch battle. Once you have made your moves, you advance the game while your AI or online opponent makes theirs.

The focus of the game is naturally on combat. You have options to simply attack or form a defensive position with sandbags or trenches. You can capture or destroy bases and outposts, which in turn can be used to generate more troops and supplies. There is also the option to call in airstrikes or get reinforcements parachuted in. All of this costs gold though, which can be earned from defeating enemy units.

At this point, I should mention that this is a PC port of a mobile game released in 2016. And it shows. This looks very much like a replica of a touchscreen game for tablets transplanted onto a PC. This immediately creates issues with controls. What may be an intuitive touch system of selecting units and giving commands to move or attack on a handheld device is much more cumbersome with a mouse. Several clicks feel superfluous, such as selecting an enemy unit to attack and then having to click again to confirm. 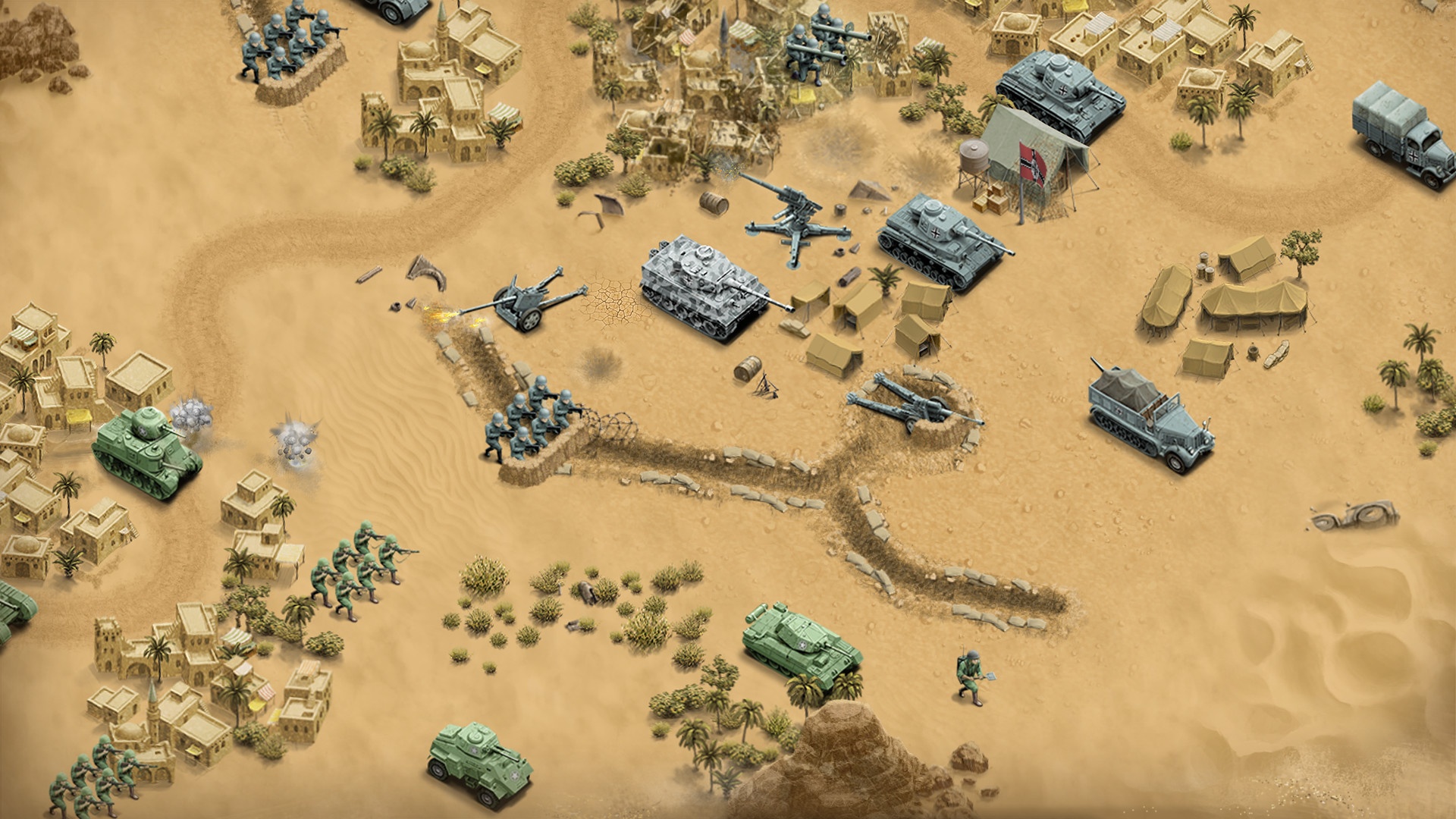 The whole system of collecting gold and spending it on resupplying your troops is also direct from a mobile game. Thankfully, for the PC this is a game you pay for once only when you purchase it, but it is immediately clear to see how the mobile version’s in-app purchases were introduced. A side effect of this, however, is that you tend to run out of gold quickly. Automatically resupply a few units and get a couple more to dig in and you will soon be told there is insufficient gold to spend.

Supply trucks are also an option to keep your units stocked (tanks seem to run out of fuel and ammo very quickly) but this is a very cumbersome aspect of the game. I often found myself having to leave my units where they were for several turns while the truck shuttled between them and the nearest base. Once again, it was easy to understand where the mobile game’s suggestions to buy x amount of gold for $2.99 came in. Unfortunately, in this PC version, the player is just left with a frustrating wait.

The maps also appear to be lifted directly from the original app. They are quite compact, especially in the early missions. It is all too easy to find yourself up against the edge of the game world and having to backtrack to seek out the remaining enemy troops. Developing a PC version offered a chance for the maps to be more expansive but that simply has not been taken.

Indeed, many opportunities to take the base idea for the game and expand it have been missed. Graphically, we see units orientated to face south-east gliding across the map much as you would expect on a low-budget mobile game. The enemy units also face in the same direction, a bizarre visual that really breaks any immersion in the game as tanks shoot at you while appearing to shoot away from you. Simply having them rotate to fire in the direction of the selected target would have made a huge difference here. 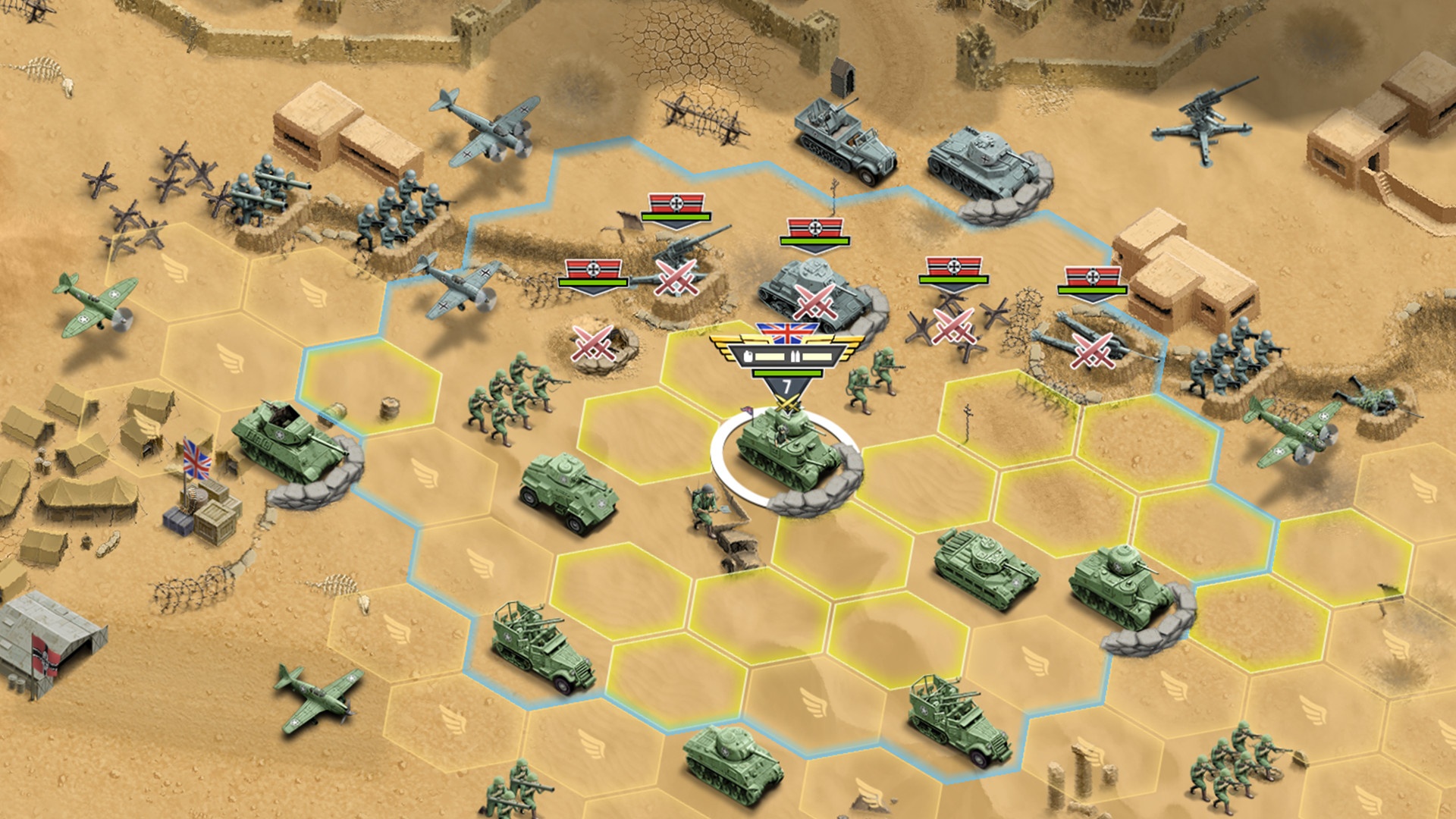 There is also an issue with how different unit types match up. While tanks do more damage, infantry seems to have too much of an effect on armoured units, even inflicting significant blows when giving return fire. It is frustrating when one of your tanks starts the turn with 50% HP but gets taken out by a couple of attacks from foot soldiers.

There is an element of strategy to deploying your units and out-manoeuvring your opponent. This does bring an amount of satisfaction when emerging victorious despite being outnumbered. However, any feelings of triumph only last as long as your supplies and gold, which is not very long at all. Add in the enemy units facing in the wrong direction, and the game fails to demand attention for long.

If turn-based military strategy in a World War II setting is your thing, you might as well seek this game out for your phone or tablet. At least it would be free (even though I am sure micro transaction and ads would soon kick in), and hardly any different from the PC version. It might even play better with touchscreen controls. This feels like a missed opportunity – a direct port of a mobile game when a revamped version would be the only way to do it any justice.