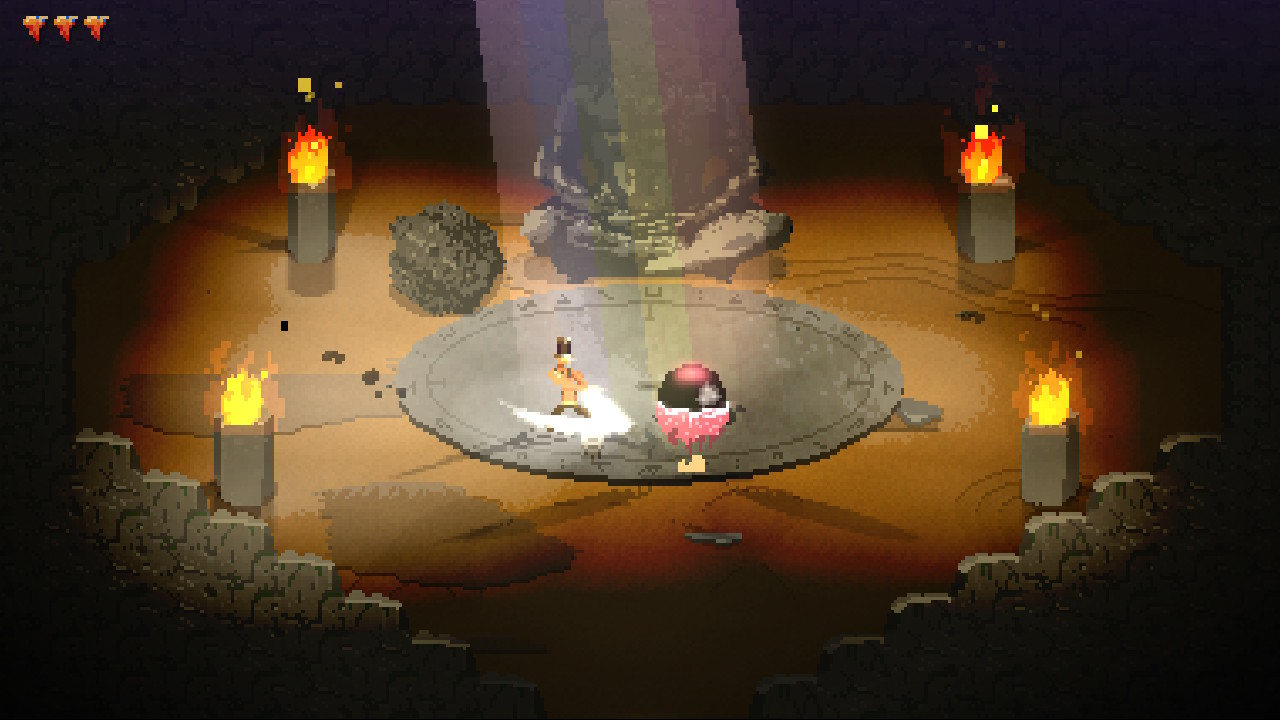 It really seems like the Switch is not just going to become the home for indie titles, but, more specifically, the home for replayable indie titles. I have never, in my life, had the pleasure of typing “roguelike” or “procedurally generated” as much as I have when I review Switch games. First it was the straight-up roguelikes, calling back to the roots of dungeon crawling. Then it became offshoots that went for the twinstick approach, bringing bullets and mayhem. But then it got really weird. Roguelike Metroid. Roguelike survival. Roguelike shmups. And I’ve been loving every second of it, because a good mechanic that’s executed with incentive for running again and again is key. And now we’ve reached another milestone, as Songbringer, an unabashed homage to Legend of Zelda, comes to the Switch. And holy hell, is it good.

Songbringer is the name of the ancient spaceship that our hero, Roq, rides around on with his partner Jib, a floating robot companion. Roq likes to travel to different planets, finding cool stuff and making music while also avoiding being arrested. One faithful day, Roq and Jib land on the planet Ekzera, where they find the Nanosword, a legendary, dangerous artifact that’s known far and wide…except for Roq, who has never heard of it. Judging the sword to be very sweet and kickass, he pulls it from the ground, immediately unleashing an ancient evil in exchange for being able to wield a humming sword. Now Roq, with Jib in tow, must enter and clear out nine dungeons of unruly baddies while also figuring out how to get off this planet alive. Oh, and we’ll learn a bit more about our heroes in the process, for their backstory is anything but procedurally generated.

Immediately, Songbringer shows you the strong suits of its talents before the game even has a chance to get going. The graphics – which are intentionally detailed yet roughly hewn pixel design – scream and demand attention. From start to finish, I loved the way that everything looked, and it helped to create this evocation of something that was both modern and kind of classic, but not in a “well preserved” sense. It was almost like looking at ancient artwork, or cave paintings, where you could get the shape and idea of what the illustrator intended. Then, when you suddenly get these stunning, graphic closeups of different items (swords, evil entities, etc.) they pop in this almost shocking way, reminding you that everything you see was done on purpose. There wasn’t a budget crunch or some kind of sub-par attempt on the developer to cut corners: Wizard Fu wanted the game to appear just as it does, and I really dig that decision. 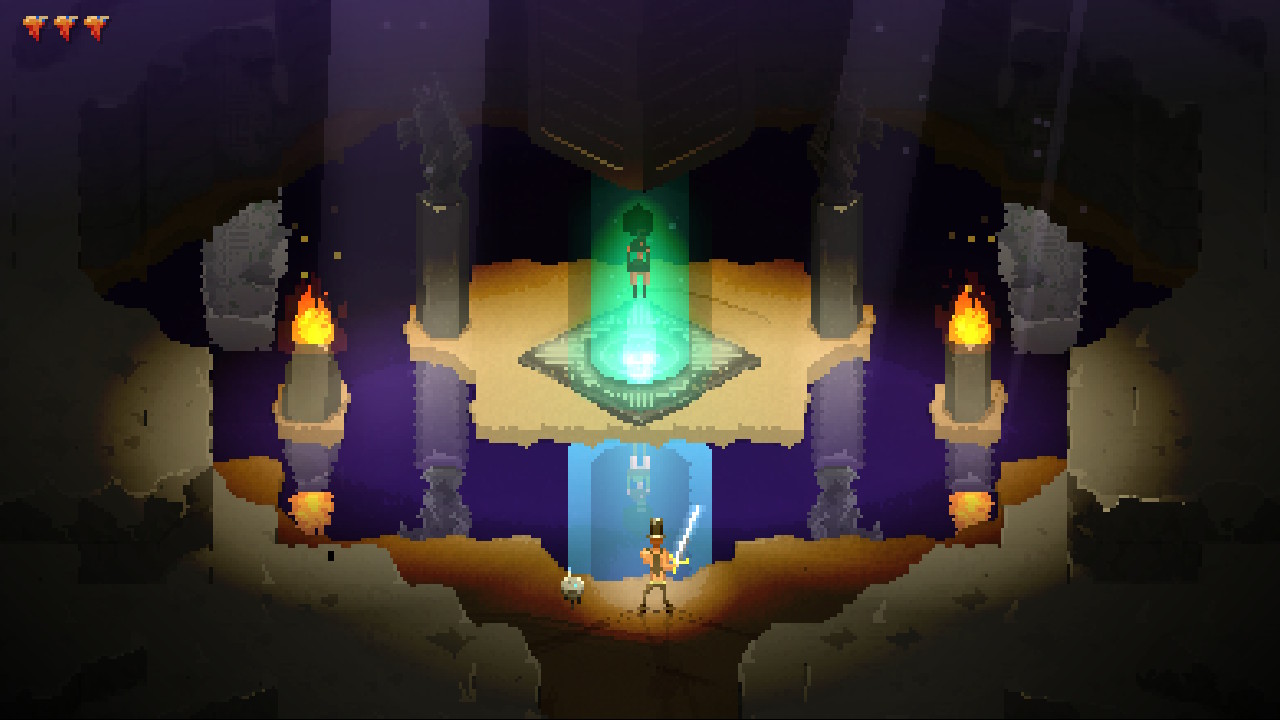 Now, as for the game itself, Songbringer does a lot in the right direction to keep things interesting. For one, the roguelike elements are omnipresent from start to finish: if you’re exceptionally lucky, you’ll get item drops that appear in approximately the same timeframe as you may have gotten them in the NES version of Legend of Zelda. So getting a boomerang (top hat) first, a bomb (explosive charge) second, and so on. Each item you get matches up with the dungeon where you find it, and you will never, at any point, be stuck high-and-dry with a dungeon that is totally insurmountable. Some may be harder than others depending on when you get through them, sure, but nothing is impossible. I have to hand it to the devs, I appreciate that this roguelike was at least tested to make sure nothing became a dead end that ended in frustration and game deletion. That would have been horrific.

Additionally, the way the roguelike is handled is a brilliant stroke that keeps things both solo and communal at the same time. Asking for an up to six character seed allows players to have this sense of control in the creation of their game, and also to be able to keep track of things. Each seed is dynamically different, from planetary terrain and dungeon placement to larger things, like certain seeds actually changing up how the game plays from the beginning. Seeds are being passed around to verify that there’s consistency, and we aren’t just fooling ourselves into believing in control. No, the seeds are a phenomenal asset and having them come up before the game instead of during or after lends a creator’s brush to the players hands.

Once you really get into the game and play it through once or twice (which, the first run should take you a few hours at least), you’ll notice certain things that both help and hamper the game. For one, there are easter eggs everywhere, and the developers intended it that way (again, these Kickstarter games are incredibly ambitious if nothing else). Having secrets peppered throughout does make for an exciting experience in terms of exploration, but that also negates some of what made the original Legend of Zelda enjoyable on repetition: memorization. I suppose you could memorize your seeds and just replay the world again, but that defeats the nature of the game as well. In short, you’re damned if you do (play for secrets, lose the roguelike) and damned if you don’t (play for roguelike, lose the secrets). While this seems like a very simple and almost childish complaint, it’s something that the Legend of Zelda alumnus may find more and more irritating with each iteration, simply because remembering and relying on the locations of those secrets were pivotal to both speed and strength when playing. 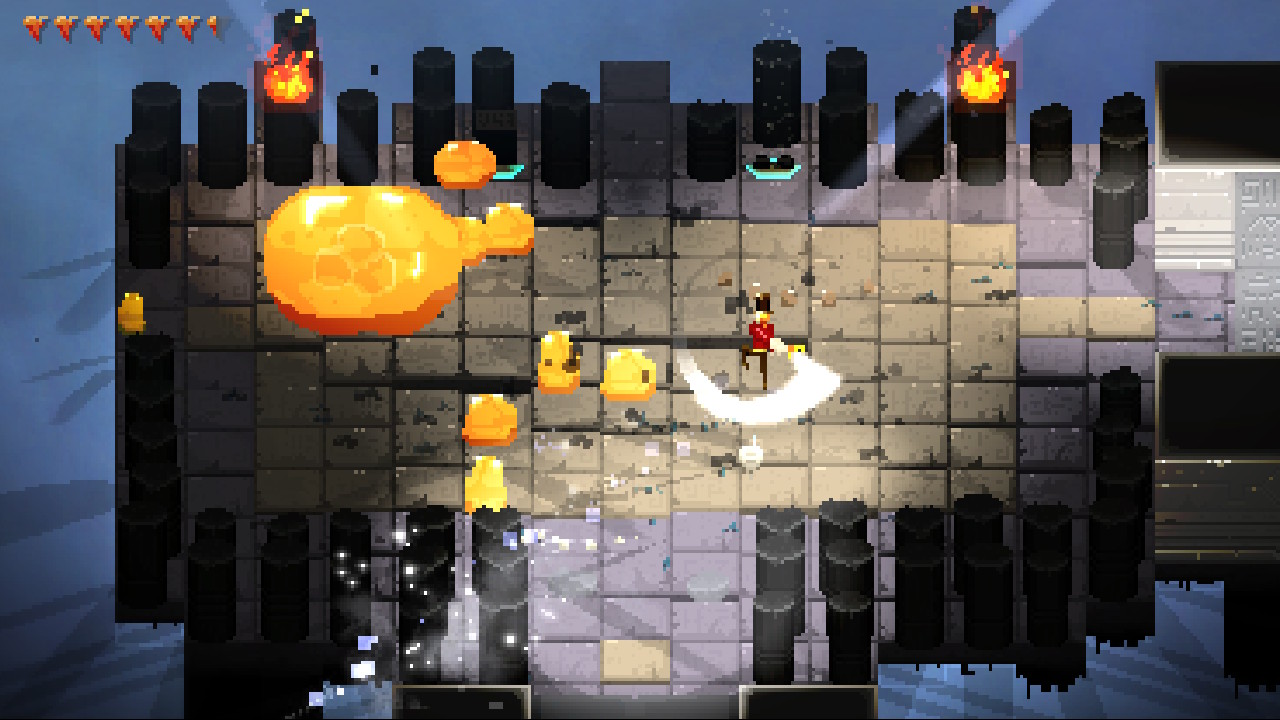 On a more technical note, I did see that the game had a couple of small issues. For one, when there was a dramatic light show (multiple explosions, defeat of dungeon boss) there was a small dip in framerate, but nothing that was too detrimental. The hitboxes were a bit maladjusted, but I think that comes with the design, specifically the rough pixel look. Basically, there were a few times that I felt the bombs especially should have landed when they didn’t, and, inversely, a few times when I thought I should have survived when I didn’t. But it’s hard to really gauge, at least on the Switch, if this is an issue of the game’s design or just my own poor playing. After all, I prefer handheld to the big screen, and maybe my eyesight just isn’t what it used to be. In either case, players should keep an eye out.

In the end, Songbringer has something that a lot of titles don’t always bring to the forefront: personality. Roq is a fantastically hilarious protagonist, literally having a meter for courage instead of health and only dying when you give into the fear. Jib’s backstory is something that almost moved me to existential tears, but was kept in check by the glib banter that helped frame everything. At every step, every moment, you get the feeling that there’s this epic story that’s determined to unfold and be told in spite of the hero’s mannerisms and brutishness, and this works on such a personalized level it felt like the game was tailor made to keep you on your toes. The music is grand, the artwork is gorgeous, and the concept, even though it breaks itself conceptually, works incredibly well. Maybe I never wanted a randomly generated Zelda idolizer, but here it is, and I really like it, and it works well. Any shortcomings in terms of execution are easily paved over by sheer force of will and presentation. You seriously need to give this game a chance, because the novelty alone is enough to hook you, and the seeds will keep growing new adventures for years to come.