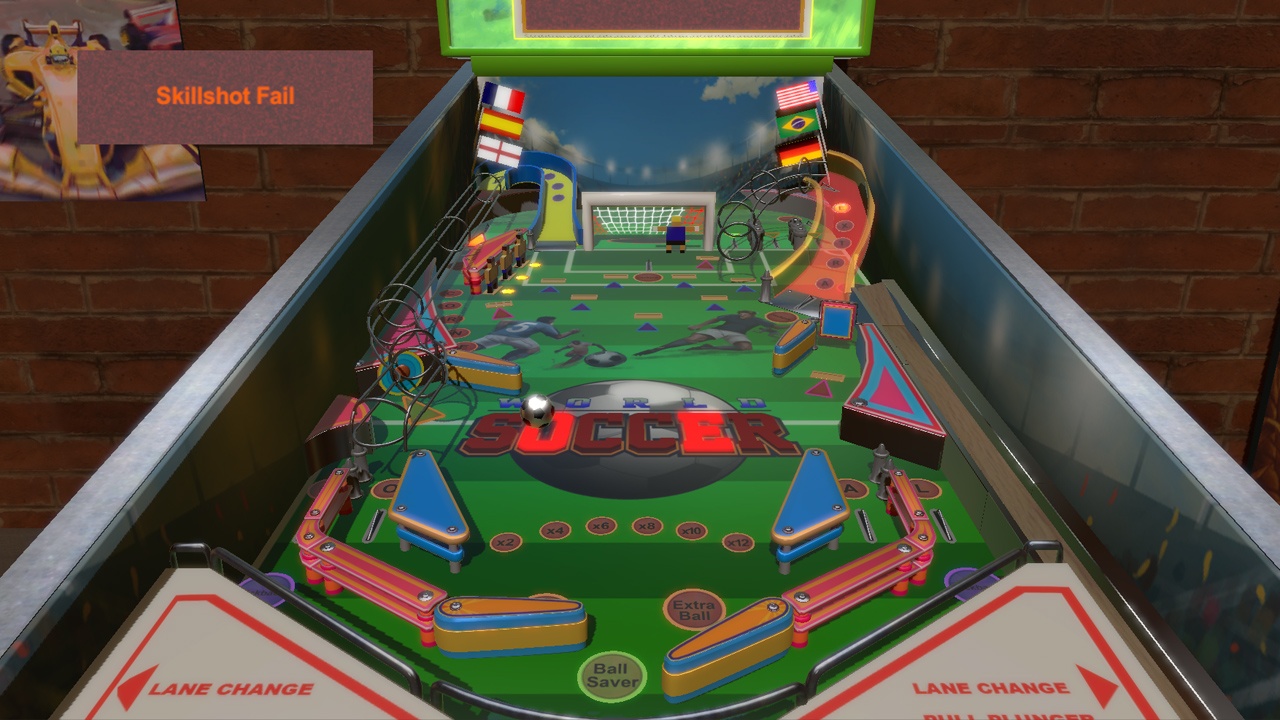 It seems like maybe the creators of Jurassic Pinball and, now, World Soccer Pinball, are approaching the eShop with a little bit of creative marketing and bold strategizing to get sales. After all, both of these titles are playing on people basically doing the Google equivalency of throwing a dart and traveling someplace. Jurassic Pinball, as I stated, seemed to be counting on people interesting in the upcoming Jurassic World sequel in order to attain sales and downloads: the Zen pack, which is vastly superior, is much harder to find given that it’s both DLC and came out several months ago. Not to mention it’s much more expensive to drop ten dollars on an “addon” than to simply buy a new game. That’s the old school mentality, anyways. And, with the World Cup 2018 kicking off this week (is it seriously in Russia?), having World Soccer Pinball front and center gives people something to latch onto and root for.

The table, as you might imagine, is designed like a football pitch (or soccer field, for some of you) and is at least a bit more interesting than Jurassic Pinball in design execution. There are a few arbitrary chutes on the left and right, some hard-to-see bumper slots tucked into the upper right corner, and, most importantly, a goalie and net, smack in the middle of the top register. The goalie moves back and forth, not really putting a lot of effort into his work but still doing a decent job of keeping while you shoot fruitlessly in his direction. Nearly every mission, when activated, relies on you shooting into that singular net and getting a goal. That’s really about it. Score a goal when it’s not the mission, get a bunch of points. Score when it is a mission, get even more points. It’s that simple, but at least it’s straightforward. 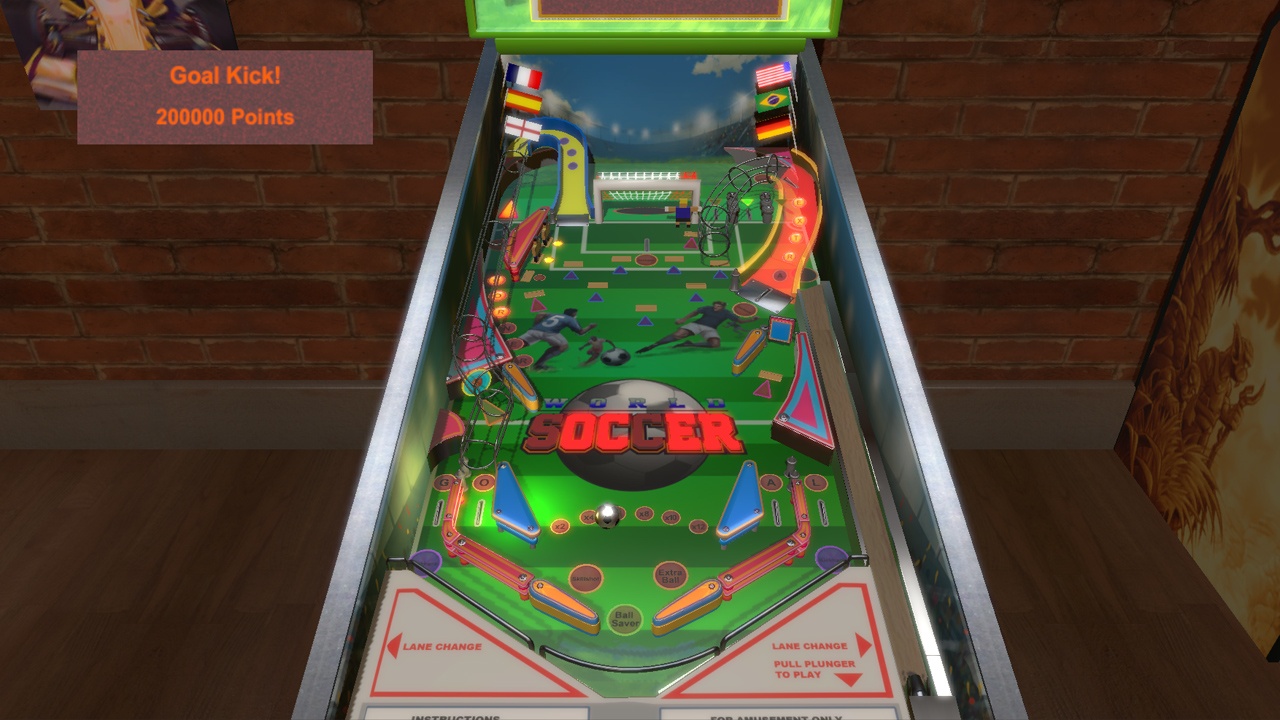 Just from a personal POV, I enjoyed playing World Soccer Pinball a lot more than Jurassic. For one, it’s got a cartoony factor to it that matches the idea a lot better than Jurassic. While I’ve been spoiled by seeing what a good dinosaur table could look like on the Switch, I have yet to really see a decent soccer one. That’s not to say there isn’t one in existence: Midway’s World Cup Soccer from 1994 is, hands down, the most nostalgic machine from my childhood, with many quarters dumped into this table during laundromat visits with my grandparents. And, sadly, when I look at this machine, I see all the extra bells and whistles someone was able to add to a table ( the giant spinning soccer ball is so awesome) over two decades ago when they had to rely on responsible, tangible physics. But World Soccer Pinball works well with the light, simple approach to the game, and the objective to get it into the net is one that everyone can understand, and will draw in more players who otherwise would pass on pinball. So the marketing is solid as well.

But once I get past the initial “Oh boy, I can shoot a goal!” mentality…that’s it. The game doesn’t have a great soundtrack or amazing details, and the graphics are really soft and subpar, like I would imagine from a pinball game on the computer in the late 90s. The replay value doesn’t come from leveling up, table adjustment or any variation of unlockable material: it’s just the drive to keep playing pinball. One could argue that’s the same thing with Stern (since only Zen has bothered to make the pinball experience cumulative on the Switch so far), but at least Stern is working with the porting of real tables, with real history, and, as a result, real designers who handcrafted them. EnjoyUp Games made a tragic mistake in this all: selling their games separately. 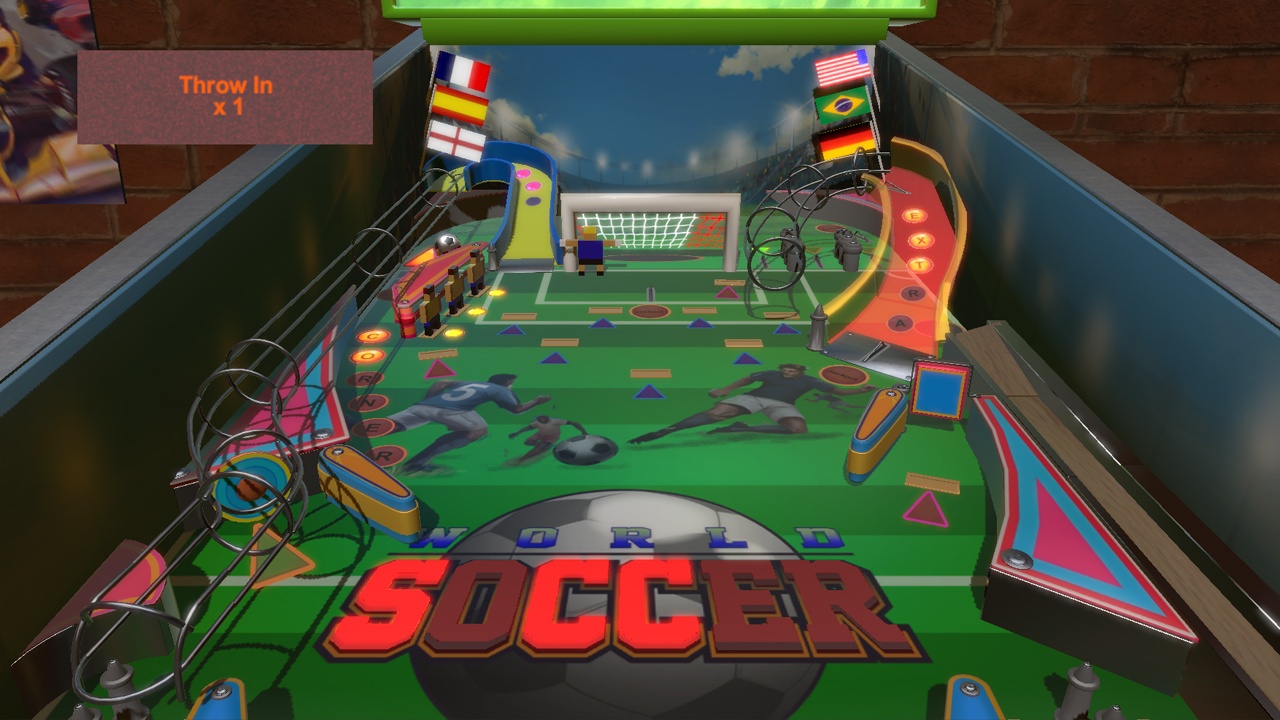 Sure, the initial sales of Jurassic Pinball and World Soccer Pinball might be better, because dinosaurs and pinball are vastly different, but having the two tables together in a single software entry would easily double the value of the game overall without putting people out too much. Think about it: these sell for two dollars or so in their natural habitats. Put them together, charge $3.99, and then you get two different experiences that you can toggle between, and, with that, have a much better time. To actually have to comprehend that I have this icon on my Switch for one measly table that doesn’t do a lot to call me back and play again…it just feels wasted. Like, why am I bothering to play this? Video games nowadays need to do three things: hook a player, reward a player, or at least impress the player’s friends. This isn’t addicting, this doesn’t give me a sense of satisfaction, and I doubt anyone who I used to play pinball with would be jealous of my sweet new game. It just falls flat.

I like World Soccer Pinball a little better than its sibling, but only just, and only because it taps into a primal part of me that likes to score goals. For anyone looking for a serious pinball game or anything more than a few minutes of enjoyment, you’ll be sorely disappointed. And if you didn’t play a ton of pinball in the mid 90s, you might not like this even a damn bit.