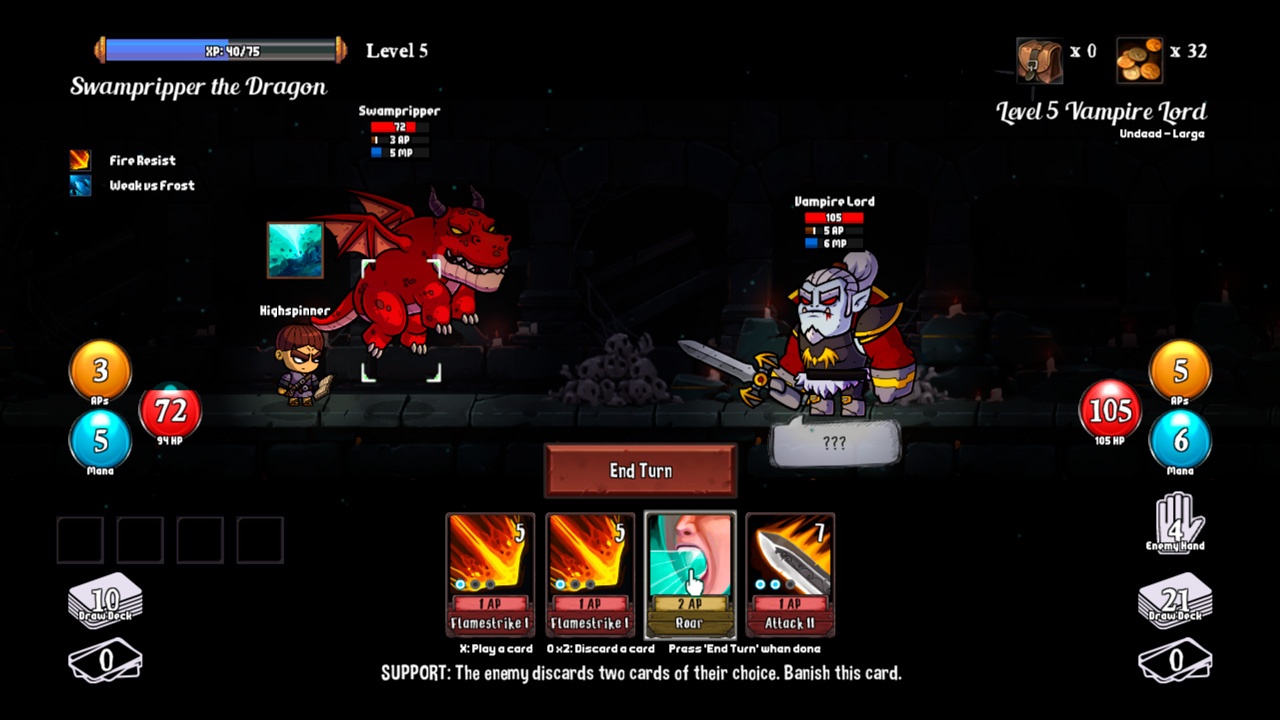 Don’t judge a book by its cover. While it may look like a flash game, Monster Slayers is charming and extremely polished. There isn’t a story, so to speak, but an end goal: defeat 2 legendary monsters (depending on which areas you choose) and then a 3rd—the Harbringer—to prove yourself a true Monster Slayer.

To do so, you must first create your hero, choosing their class—6 starting, and 6 more that can be unlocked by defeating the Harbringer with the classes that preceded them—and appearance from a list of presets. It’s a nice touch, but like the game says, you won’t be alive for very long anyway.

That will be true at least for the first few runs when you start the game. You are given the choice between two random locations from 6 possible, each has their own list of monster, which dictates how you’ll need to approach them. The Elderberry Forest, for instance, has spiders that inflict poison and can force you to discard cards from your hand with their webs. So hitting them hard and fast is in your best interest. If you’re playing a less damaging class, you may want to upgrade your cards before attempting this area.

Selecting from one of two possible locations actually adds a layer of tactical strategizing as you learn the enemies found in each area and how best to deal with them during your runs and plan accordingly when you enter the location. It gives you the option to plan your run a little better since you’ll know what you’re up against.

Locations are divided into interconnected areas, each of which tells you exactly what you’ll encounter— enemy, altar, shop, treasure—within them. You have to actually visit a node to reveal the ones adjacent to it, so you’re able to uncover as much or as little of the map as you’d like depending on where you find the boss room, denoted by a crown. There’s a risk versus reward here that regulars of roguelikes will be familiar with: do you stay and try to get gold and equipment at the possible risk of dying or being rendered too low on HP to face the boss or do you conserve your HP and make a rush for the boss and risk being flattened?

Even something in between those two options may result in being overwhelmed sooner, or later, so choose your battles wisely. 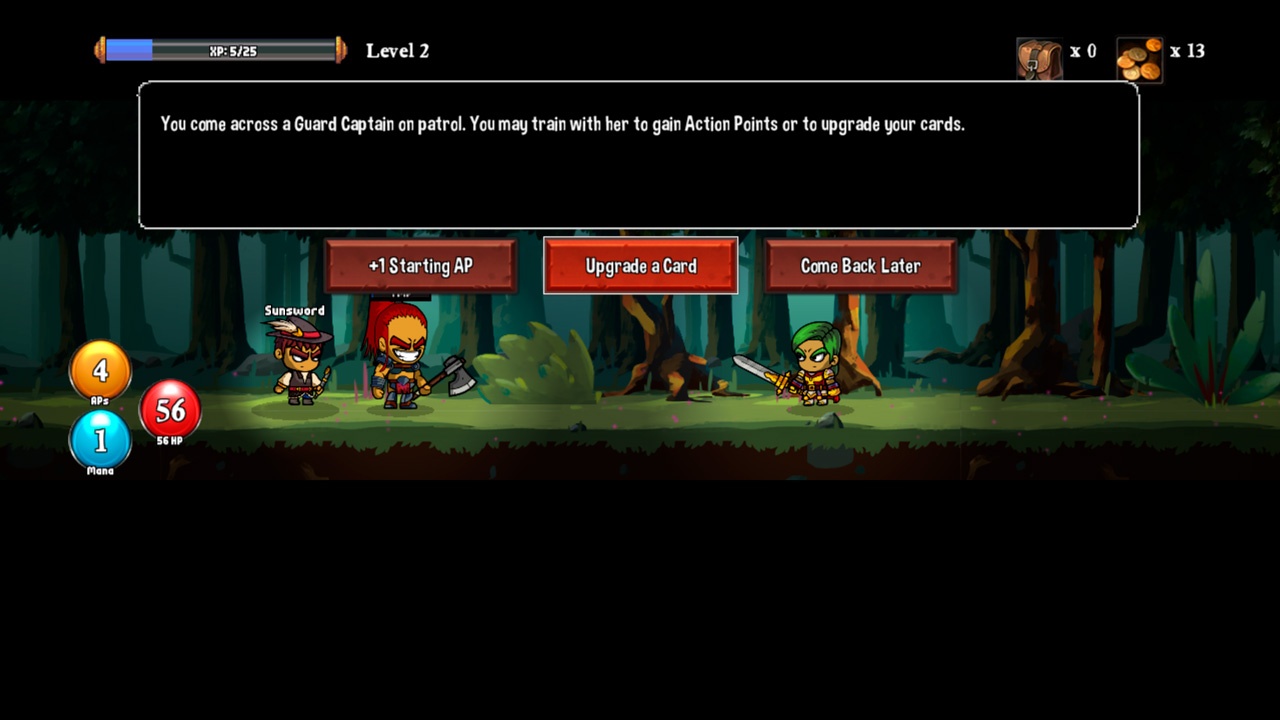 There’s a lot of on-the-fly decision-making involved in this game. Altars allow you to sacrifice something—Mana, starting AP, a tactical advantage such as adding junk cards to your deck or more powerful cards to enemy decks — in exchange for a benefit like a powerful card, quick cash, greater HP, and the like. Whether these exchanges are worth it or not is entirely up to you and accepting one could easily alter the fate of your run for better or worse.

Shops give you the option to buy and sell equipment and buy, delete, and upgrade cards. You can’t change equipment during a run, but successful or not, you’ll be able to keep them. Upgrading costs 20 gold the first time and rises incrementally from there; same with deleting. Upgrading allows you to increase the effectiveness of your base deck, meaning that you can’t upgrade cards found during your run. Deleting cards from your deck is a useful way to remove weak or junk cards from your deck so that they won’t clutter your hand. Some cards have no effect other than to take up space when you draw, so it’s in your best interest to delete these.

Allied units like captains and party members that you didn’t select this run will offer a combination of the above. Some will give you a card and others will train you to have more starting AP—it all depends on what you choose.

If there’s an enemy in the next area, you’ll be shown their name, level, and how much exp you’ll get from defeating them.

Combat is where you’ll be spending the bulk of your time. Battles are fast-paced 1v1 affairs during which opposing combatants draw a hand of cards and play them in turns. The number of cards you can play depends on your mana and action points, both of which regenerate automatically. The higher the card level, the more AP they will cost, so keep that in mind if you rush upgrades early on. 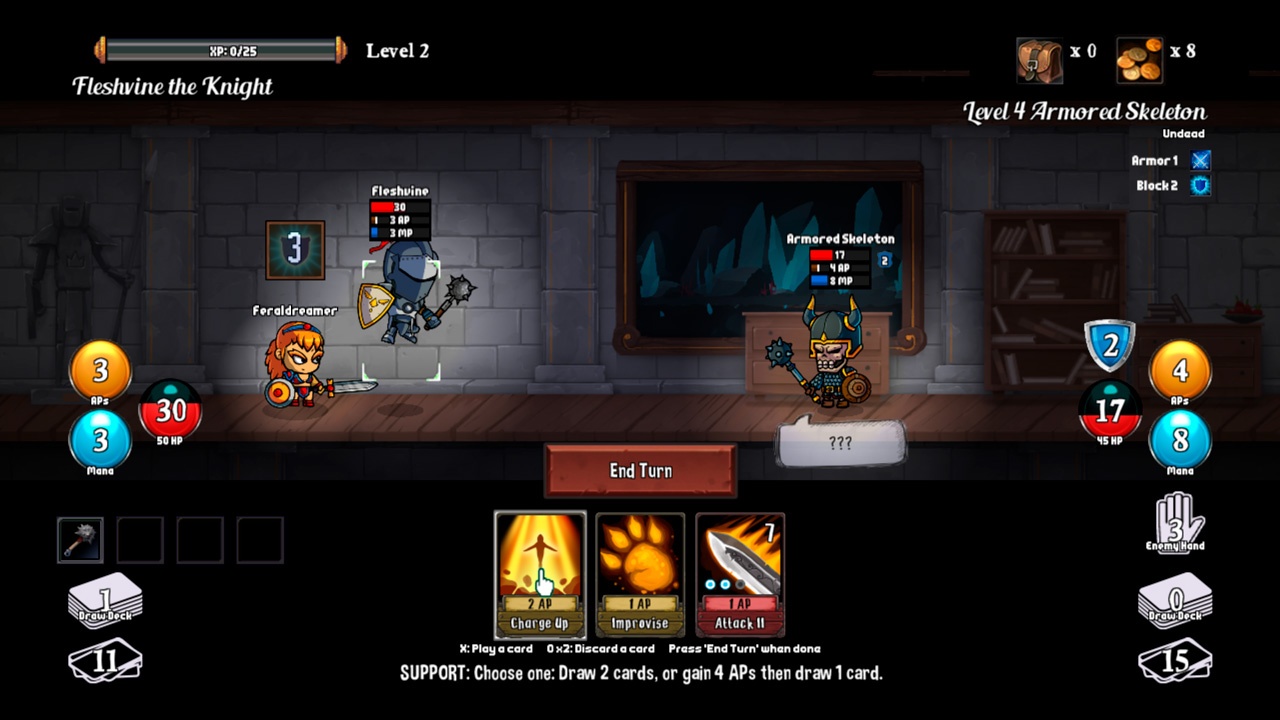 The enemy A.I. is pretty intelligent and will keep you on your toes, chaining together attacks, wearing you down with status ailments, and negating your purity deck with blocks their programmed play style dictates.

After battle, you’re rewarded with the experience shown before the fight. If you level up, you are fully healed, so it’s in your best interest to plan when you’ll level to a degree. Each level, you have the option between a mixture of upgrade/delete a card, add AP/mana/HP, or get a new card/equipment.

Every five levels, your hand size is expanded by one, so at max level you’ll be able to hold 6? It’s important to balance your attentions as you level; having a deck full of strong cards is useless if you don’t have the energy to use them and vice versa.

.Bottom Line.
If you’re a fan of roguelikes, Monster Slayers is a great game for beginners and veterans alike. It’s satisfying to progress, even if that progress is slow; one run at a time. Multiple classes with different play styles with 6 additional classes to unlock by beating the end game make for a lot of replayability and the quick combat makes it so that you can pick this game up and put it down at will.