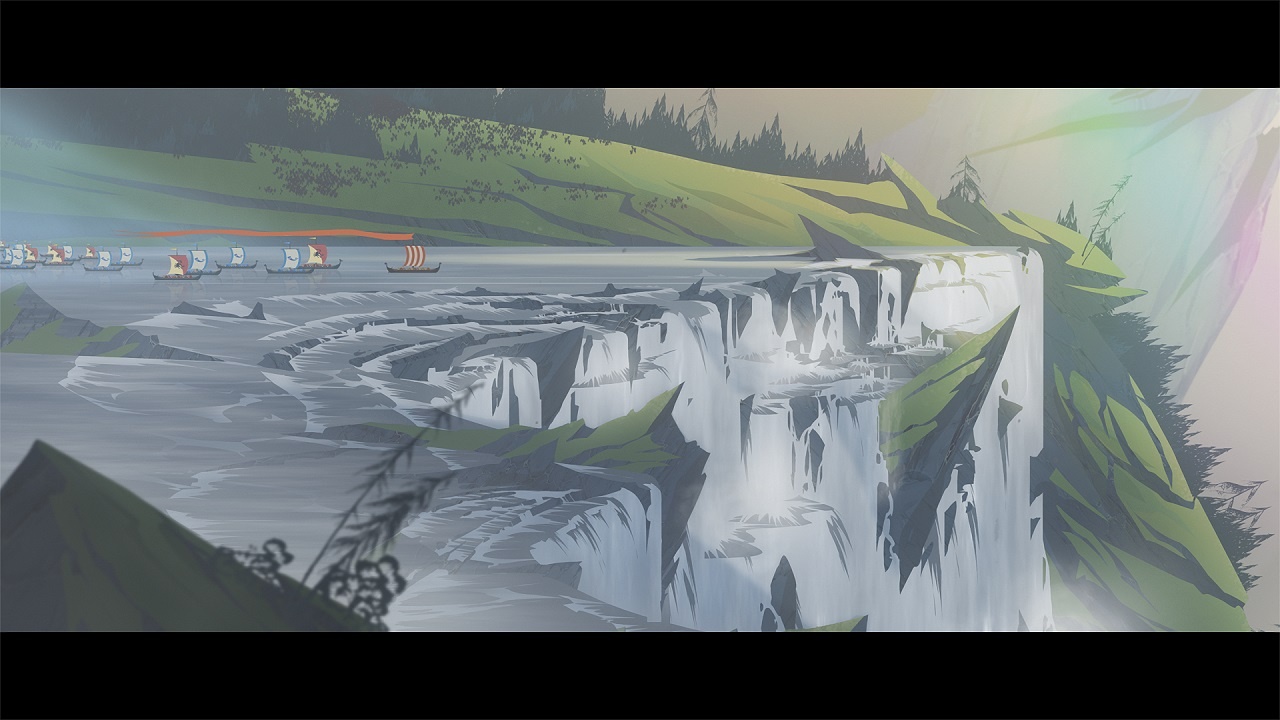 Saga. The very word evokes a massive, boundless story that transcends time, location and limitations. A tale so great that it needs multiple chapters and entries to be properly told, and the patience of a sage to drink in all the information. When Stoic launched their flagship title, The Banner Saga, over four years ago, few could have imagined that the title would live up to its own moniker. The original game has gained countless accolades and awards, and rightfully so: the land of humans, Varl and Dredge is an impressive one, rich in lore and history. Switch owners were fortunate enough to see the original installment launch on the Switch this past May, and now the second book has landed, giving players more than enough time to finish the first and work through this middle section. The third and final entry is slated for this July, and time will tell if Nintendo will do a simultaneous launch, or if PC users alone will see the final fate of the forces of light versus mythical darkness. This is the Banner Saga 2.

Players who have never experienced the original Banner Saga need to be warned: this is not a Final Fantasy or Dragon Quest situation. Banner Saga 2 takes place almost immediately after the events of the first game, putting you in the seat of either Rook or Alette, depending on your preference from the previous game. I will say, it’s incredible that Stoic was able to work some things out and have players of the first one import their save to the second to “continue” the quest as best they can. Starting fresh isn’t going to hamper your play, not by a longshot, but you do have a couple of small disadvantages. For one, there’s a chance that you’ll be able to import some better items and skills from the previous game depending on how things played out. For two, there is no preamble whatsoever: the backstory you get at the beginning is literally the conclusion of the first game and drops the player in without much introduction to the world, the history or how things are right now (players may not even realize the land is in perpetual twilight until some time into the game). As a result of how this is set up, it’s less than ideal to begin with this game from a storytelling point of view. Sure, the mechanics are a bit more polished and there’s a lot more meat than the previous game, but you’ll be a bit lost in terms of the how and why you are where you are. Without spoiling too much, things aren’t better for humankind despite the efforts from the first game, and now the army that either Rook or Alette now leads is looking for sanctuary and alliances from the coming darkness. Naturally, things aren’t as smooth as anyone would like them to be, and, even in the face of certain annihilation, people still manage to be self-serving dicks. Simply amazing. 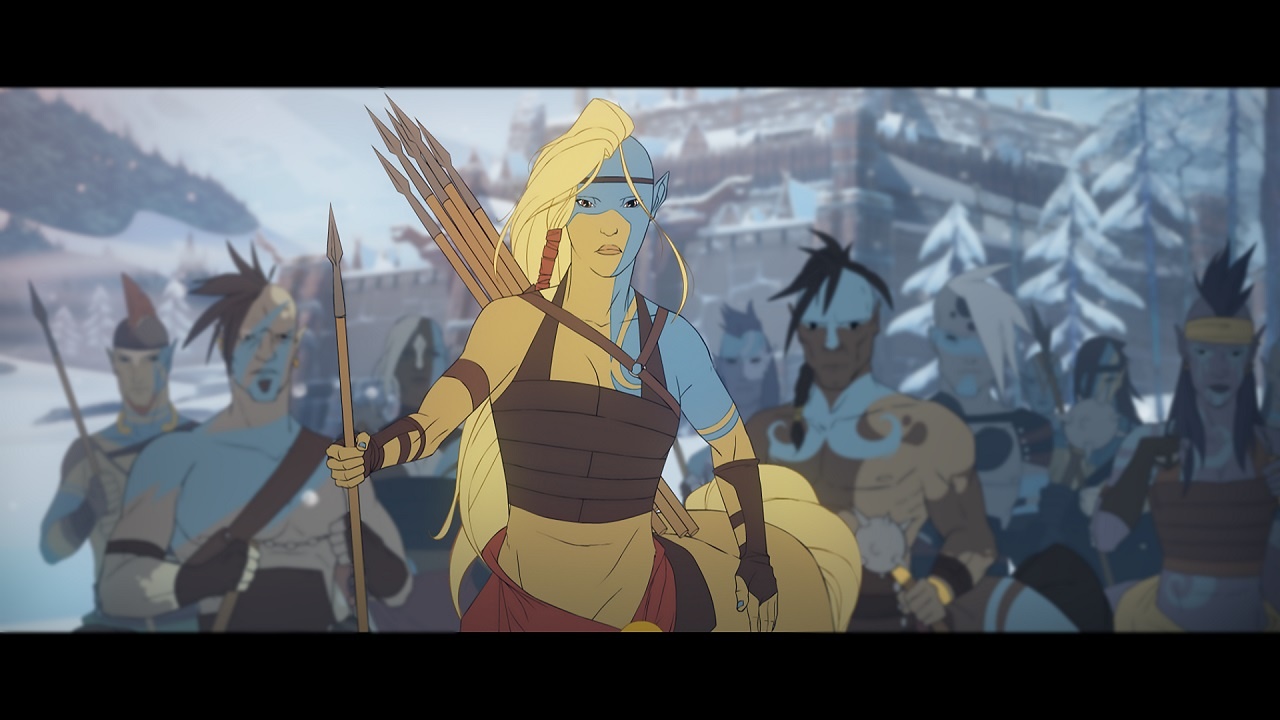 Once you dive into the game, the Banner Saga 2 is best divided into two separate but equally important sections: the battlefield and the campground. Due to being the leader of a faction of humanity and wanting to, well, survive, maintaining a good morale and energy is essential to moving forward in the game. It’s a bit odd, but making sure that you have plenty of food and rest keeps your troops happy and better fighters in the skirmishes. Supplies and other things can only be bought through a currency called Renown, which comes from battle and heroic choices. It’s an interesting system: rather than focus on the individual, Renown really makes you care about the caravan as a whole. You’ll get more Renown for heroic deeds during decisions and from especially good combat, but the Renown must then be carefully doled out to either feed everyone or promote one person. Poor morale and lack of rest affect everyone, and the timing for things going south is rarely optimum. Unlike something that’s focused on town building or more “simulation” aspects, the campground times in Banner Saga 2 can be as brief as you’d like them to be to simply move along the main story. However, you will find that a couple extra minutes here and there can be the difference between a good campaign and a great one, especially in Root’s storyline.

Now, combat. This is where Banner Saga 2 shines, and thank God, because it’s the vast majority of the game. Taking cues from other classic strategy RPGs, Banner Saga 2 has you moving pieces about the board, taking turns with the enemy and lining up the proper avenues for offense and defense. Playing fields vary, but, often times, you’ll have obstacles and barricades of some design strewn about, working in both you and the enemies favor. I found that the enemy was quite prone to destroying the barricades whenever they couldn’t reach me directly, and this applied for when I was fighting the Dredge as well as certain other “incidents.” The willpower system, a limited amount of energy that can be exchanged for another square of movement or another point of damage, is a sincerely interesting and complex one, especially since a well-timed moment can mean defeat or success. The party that you start with at the beginning could very well be your primary team throughout the entire game, especially with well-chosen gear and promotions, so treat them well when you go into battle. Know when to fall back and lick your wounds versus charging along and ignoring the pain. I had a character get knocked out and, though he didn’t die, he was on the mend for days and left me high and dry when another Dredge encounter happened.

The artwork of Banner Saga 2 continues to be a razor’s edge of beautiful and haunting, as Stoic has done an outstanding job of painting emotions onto the faces of our heroes. From those carrying anger and hope to those staggering under loss, there’s something about the design and dimensions of human and Varl alike that keep them empathetic and memorable. Interestingly, the Dredge are a bit more cartoony, like a callback to the bad guys I’d see in a 1980s Saturday morning cartoon, but it really works in that sense. It evokes this “more evil than nature” mentality that keeps them mystical and legendary, a boogeyman come to life that the townsfolk cannot accept even as they bury blades in bodies. The audio has also done a fantastic service of helping evoke a timeless and forgotten world, a soundtrack of years gone by and heroes long since forgotten. Banner Saga 2 feels like a movie I would have loved as a child, re-watched as an adult and been pleasantly surprised at how well it held up. 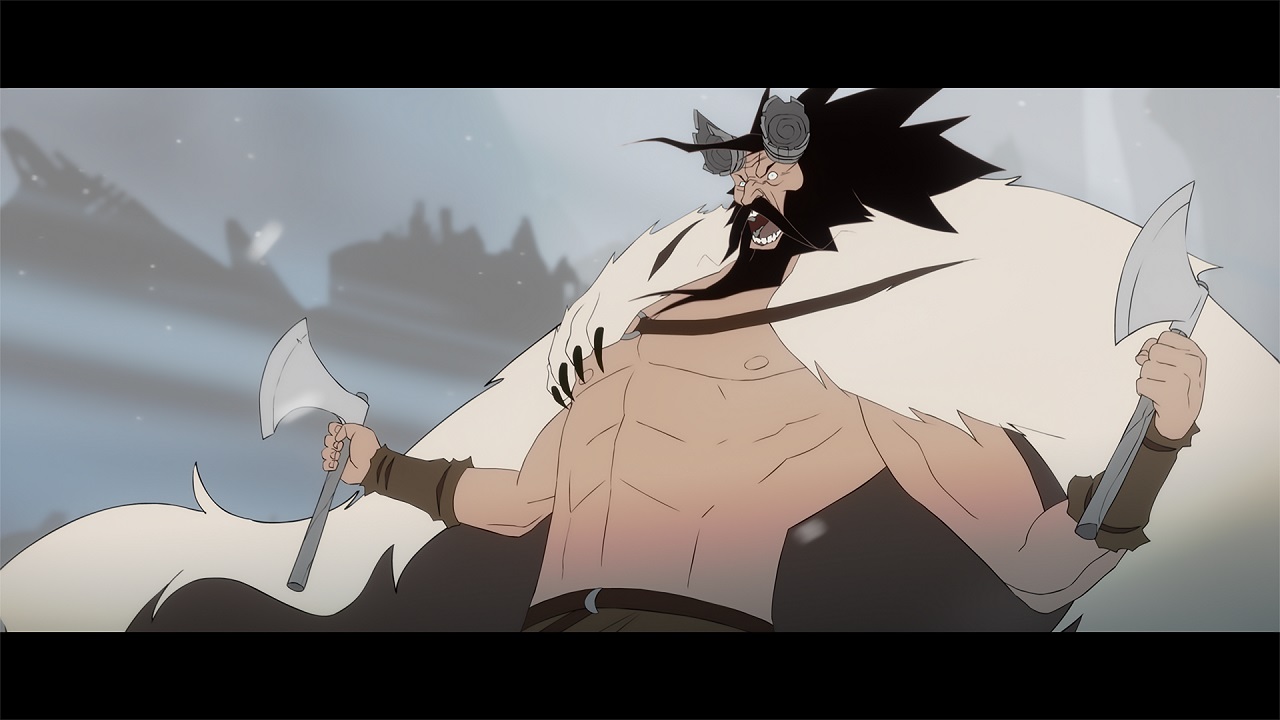 The only thing I didn’t love is that performance on the Nintendo Switch isn’t kind, especially after waking. Starting the game fresh, the battles ran smoothly, though there was this odd stutter skip during cutscenes and conversations that I couldn’t quite figure out. Once the Switch went to sleep, however, waking up brought me a grumpy, janky game that took several minutes to get its hat on straight before playing more cheerfully. I eventually had to finish the battle, force quit the game and relaunch, and suddenly everything was hunky dory. Though this isn’t a massive problem (especially since most people won’t quit mid-battle), the Switch, by its very nature, is meant to be a portable and accommodating system. If players are forced to essentially ignore their lives in order to get to a point where stopping playing is more affordable than others, it’ll alienate a lot of their potential player base simply because it’s inconvenient.

All in all, I’m torn about Banner Saga 2 because a game should be able to be judged by itself, not by what comes before or after it. Many can argue, successfully, that Empire Strikes Back is a fantastic standalone film, and they aren’t wrong: it carries a great story, performance and moments without needing the crutch of New Hope or Jedi. Banner Saga 2 is an incredibly important entry into the trilogy, has a ton of amazing moments and arguably delivers more in terms of story, combat and variation than the first (plus the way that Root and Alette’s stories branch out brings some real questions as to what on Earth the 3rd entry will bring). But new players will be confused, a bit upset and probably totally derailed from understanding the story as it stands without at least a small primer for what happened in the first game. If you already bought the first and loved it, this is a no brainer: get Banner Saga 2. If you’ve never played before, I highly suggest a small read of the previous game’s lore before diving in, if only so you can enjoy it in its full capacity. In any case, don’t miss it: the trilogy’s conclusion is sure to e a memorable one.