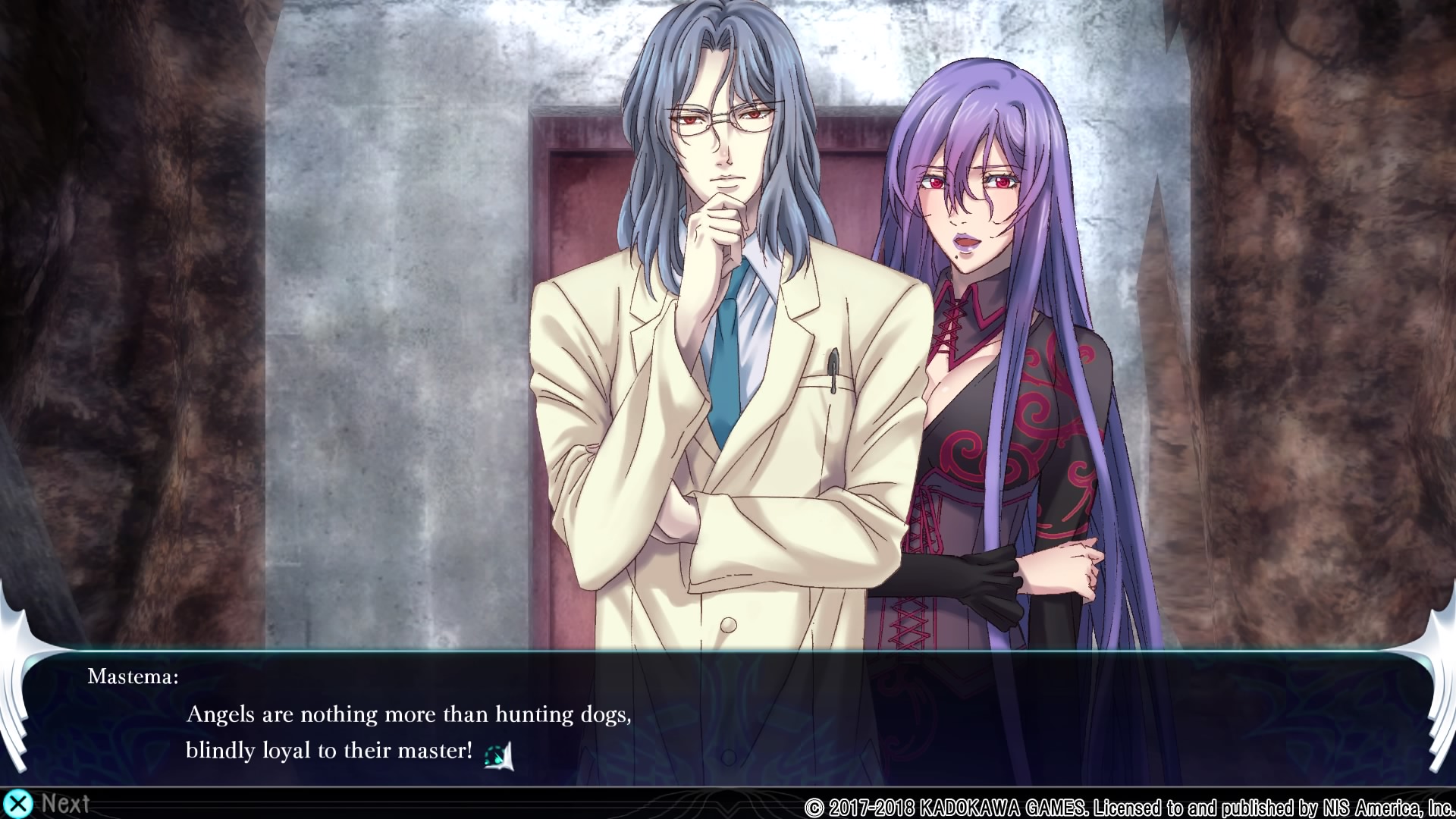 The Lost Child immediately throws you into an obscure monologue that only serves to confuse the listener. I’m not a huge fan of games that do that, as it doesn’t tend to spell well for the rest of the story, but the game gives you a good reason to keep pushing through until you figure out what exactly is going on.
You are Hayato Ibuki, journalist for the LOST occult magazine and the Chosen One. Every Era, there’s one person selected by God to save the world from the forces of evil, as you’re told by the angel, Lua, who becomes your guide throughout the journey.  Using the specialized gun, Gangour, you’re able to capture your foes, demons and fallen angel known as Astrals, and have them fight for you in order to protect the Mortal World. Using the Gangour is like Russian roulette: with each use, you could possibly die, though the odds are low. All is not as it seems in this age old clash of Good and Evil and you’ll use your investigative chops to figure out the truth. The game takes names you’ll recognize from different religious mythologies and breathes new life into them, which is unique, though from personal experience the weird and wacky cast is to be expected of developer Kadokawa.
The Lost Child’s story is told via a mixture of narrative and dialogue between characters on-screen–visual novel style. Unlike a visual novel, the game lacks the option to skip text or automatically have it progress once a line has been read. For the most part, the translation is good. Voice acting is available in Japanese and English, which is a nice option to have, though I didn’t find I liked one more than the other. Each option has voices that I didn’t care for, so it’s a matter of which you find less annoying, I suppose. The entire game isn’t voice acted, but rather there are sound bytes sprinkled throughout normal gameplay and significant exchanges are voiced.
While speaking to other characters, you are able to select dialogue options, which give you points called Karma. Karma can be used to purify and strengthen Astrals. There are three types of Karma–Good, Evil, and Dual–and you require a specific amount for purification and strengthening. Different Karma proves to be more effective in awarding experience depending on the creature you’re strengthening, denoted by the character on the lower corner of its portrait. Demons don’t gain experience in battle, so this is an interesting way to develop them. Karma does drop after random encounters and can be applied to your demons at any time via the tablet menu. 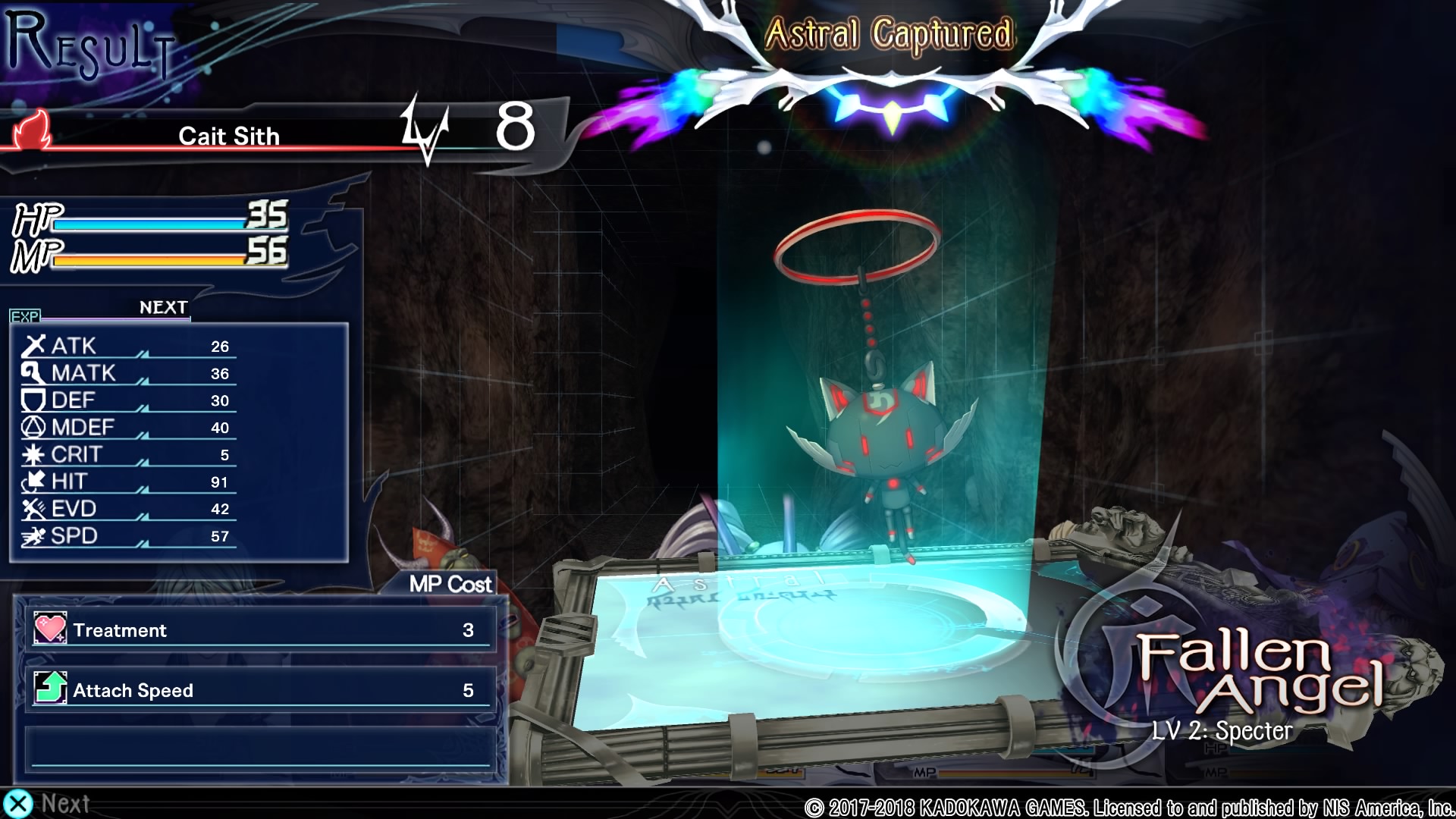 Because Hayato works for an occult magazine, the story plays out through investigations that are posted on the memo board in the LOST office. Investigating unlocks new areas, which can be visited to conduct interviews and gather more information on the location of Layers, the game’s dungeons.
Before you can embark on a demon slaying journey, however, you’ll need to prepare. The LOST office and surrounding area acts as your headquarters and includes the following facilities:
Additional areas are accessible through the world map after you board the train at Shinjuku Station. This middle step between HQ and world map seems unnecessary, but that’s a minor complaint. Investigation areas consist of people to interview, presented as a menu. Speaking to the right person will move the story along and allow you to access additional areas and Layers. Once you enter a Layer, the game becomes first person exploration within labyrinth. The controls are standard to the genre: movement with joystick or directional pad. Strafe left with L1 and right with L2. X to interact. You start with a blank map and fill it out as you go.
Combat is turn based and your party consists of Hayato, Lua, and three other demons of your choosing. You also have six Astrals on standby that can be swapped into the available active slots during your turn using the Gangour command. It was refreshing to be able to freely swap out Astrals without having to waste a turn or expend some sort of exchange currency. Hayato and friends have your standard RPG commands–attack, defend, skill, item–but there are a few things that are unique to the game.
For one thing, there’s a creepy eye at the bottom right corner  that serves to indicate hostility, described as “the visual representation of the enemy’s anger.” The stronger it is, the more likely you are to being attacked and the eye will widen and change colours as the combatant draws aggro. Kind of like being a tank in an MMO, you can do things raise and lower this gauge so that you can keep characters with less health or defense from taking the brunt of the damage. This was very useful, particularly during boss fights; no more crossing your fingers and hoping a certain character won’t be struck because you’ll know with a pretty high certainty that it’s coming.
The Astral Burst command allows you to use the Gangour to capture Astrals. The capture rate depends on the fullness of the Ether Gauge, displayed at the top of the combat screen, and your combination of active Astrals. The game will tell you how much damage your Burst will do. If it is enough to defeat the enemy, you’ll capture it. There are different types of Astral Bursts, each with their own element and special effect, so using the one that takes advantage of the enemy’s elemental weakness can change the tides of combat. The Ether Gauge fills as you attack. One of the things I disliked was that  it can be overfilled, rendering it useless for a full turn. This sometimes forced me to use it prematurely and not have a powerful strike saved up for an Astral I’d yet to capture or a Layer boss.
Finally, we have the Fruits of Wisdom System, which allows for random skill acquisition when your demon attacks. This is yet another attempt to shake up the normal progression systems set in place by RPGs and it works. No two Astrals are the same because they can learn different moves as a result of active use in combat and the Spirit Scale. 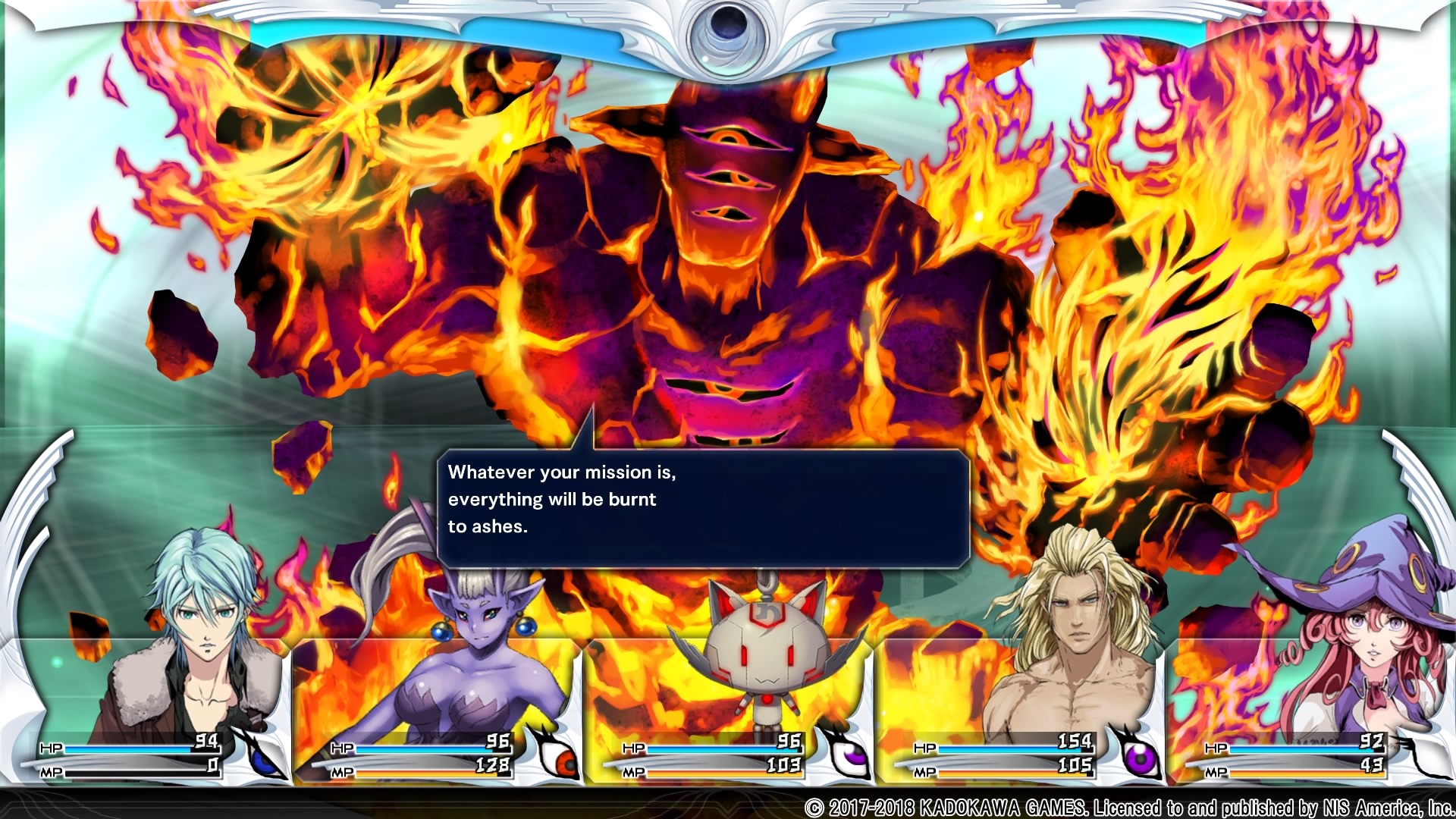 Experience after combat is only awarded to humanoid combatants. Upon levelling up, 5 bonus points are  awarded and can be allotted to stats as you see fit. You’ll also receive any items dropped and, on occasion, a chest. Gold chests have a high chance of possessing the material needed to EVILve your Astrals, but they’re also more perilous. There’s a chest opening mini game, which is pretty neat. The unlock command raises the danger or unlock level, suitably visually represented by a bar that looks like a devil’s wing and an angel’s wing respectively. If danger fills up, the person or Astral attempting to access the treasure within receives damage; if unlock fills up, you’ll successfully open chest. The “Investigate” command tells you the kind of trap awaits failure at the cost of raising the danger level. You can also use your Astrals’ skills if applicable. Some are better suited to certain traps.
The game’s music is serviceable, but headphone users be warned: the BGM is annoyingly loud. It defaults at 80% yet that’s still far louder than the voices for some reason. I’ve since lowered it to 15% and still sometimes have trouble hearing PSN voice chat over the game even with party audio prioritised. The art style is great; however, Astrals tend to be on the grotesque side. The static backgrounds are nice and characters change facial expressions, but it’s a shame that many of them are the same stock image with a different generically descriptive name.

The Lost Child is a pretty standard dungeon RPG with an interesting story and creature collection aspects. While it may not wow you, it does a serviceable job of holding your attention for the entirety of the ride. Fans of filling in every tile and catching em all will feel right at home here.