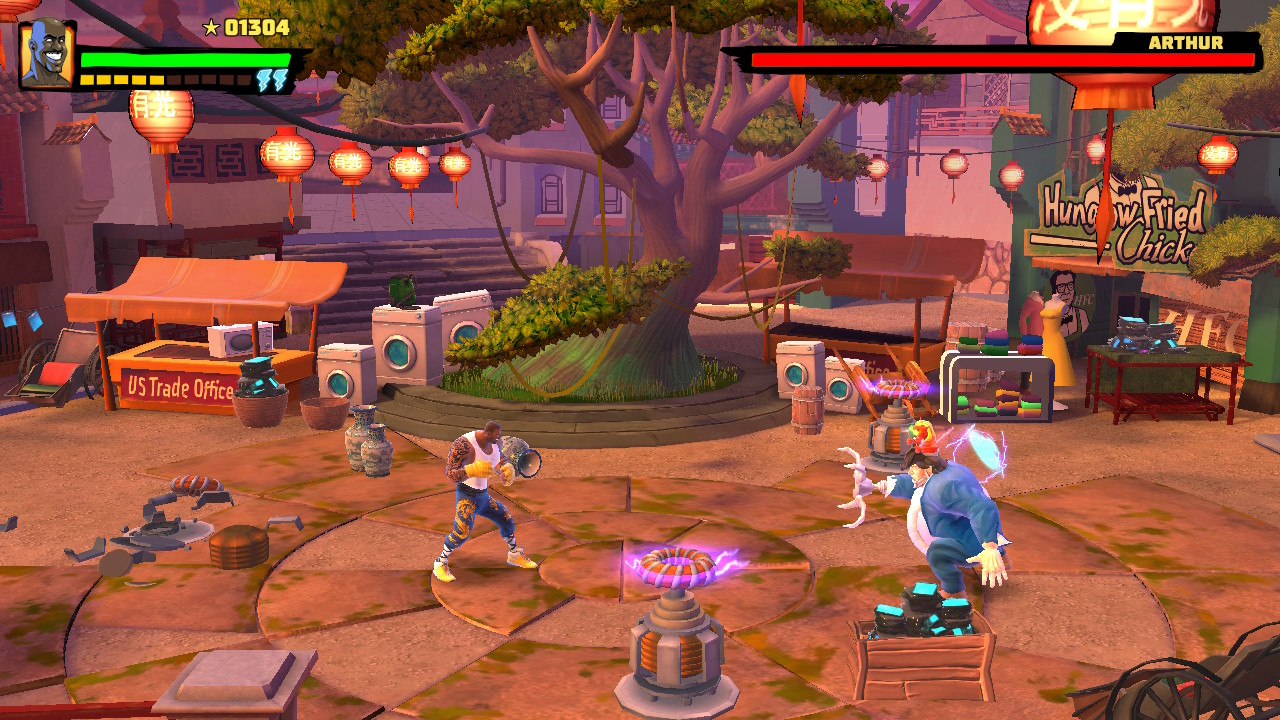 My old sensei once said to me: “Kick! Punch! It’s all in the mind”. Wise words indeed! Especially now as Shaq Fu: A Legend Reborn fights a release onto the Nintendo Switch. Co-produced by Saber Interactive and Big Deez Productions, in partnership with Wired Productions and Mad Dog Games, this sequel to Shaq Fu, the 16-bit cult flop of 1994, now seeks redemption for its roundhouse ways, with an array of new moves that are sure to make your eyes water more than Parappa the Rapper’s Master Onion ever could.

For the uninitiated, the character Shaq is based upon the basketball legend from the nineties, Shaquille O’Neal; a beast of a man who towers at over seven feet in height. After a successful Indiegogo campaign and with his size 22’s in tow, the big man returns to thrill a newer generation of gamers as he kicks and punches his way through a series of side-scrolling levels to seek politically incorrect revenge and spread the word of crass humour with his low-hitting puns.

The story revolves around the discovery of an orphaned child, named Shaquille, who is found abandoned within a basket that is floating along a river. Because of his size, his school life was tormented by bullying until one day, an old man, Ye-Ye, noticed him and decided to train Shaq in the art of Wu Xing; an ancient form of the martial arts. After becoming a master himself, Shaq and his sensei return home to their village, only to see it being bombarded and invaded by an enemy force seeking to destroy the old man. 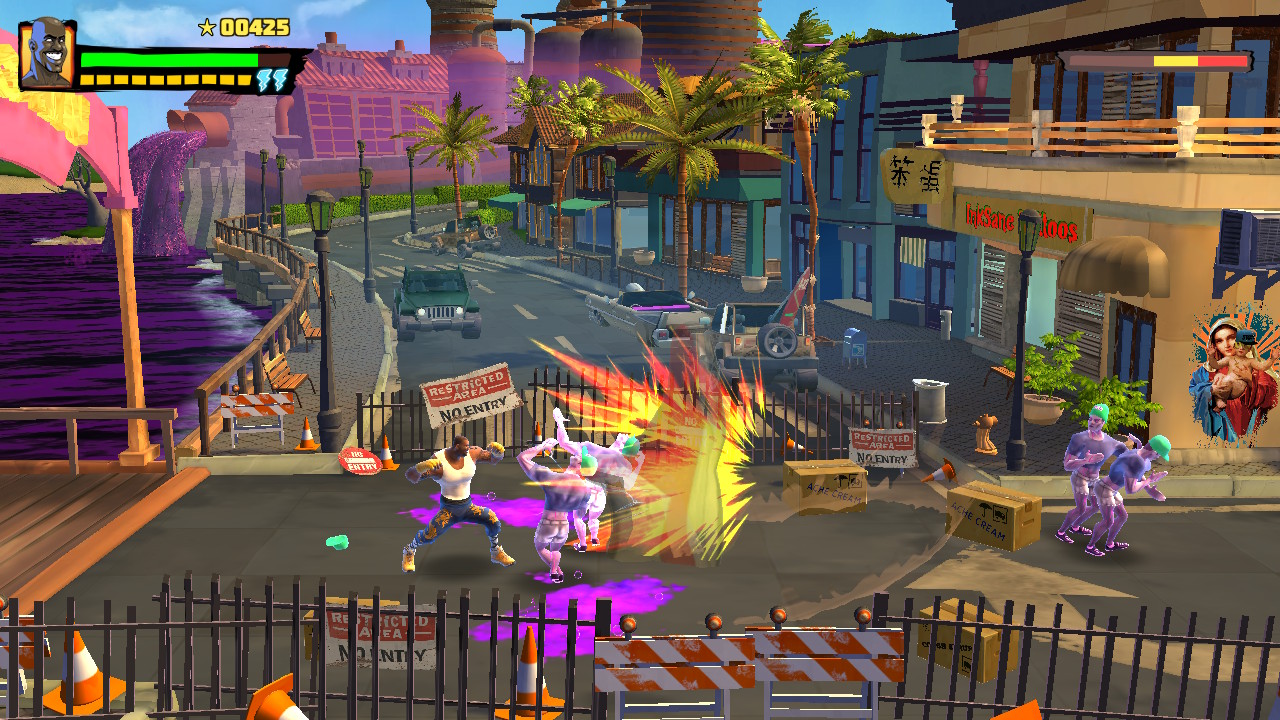 Spread over six chapters and forty checkpoints, you embark on a side-scrolling, beat-em-up journey that takes you through a series of differing locations; each one housing a variety of bad guys and bosses to pummel to your heart’s content. With each level taking around twenty to thirty minutes each to get through, depending on what difficulty you play, there is plenty of action here to keep you satisfied. Playing in a similar vein to titles such as Streets of Rage and TMNT, you can smash up stuff located amongst the backgrounds and foregrounds of each level, pick up limited-use weapons and even send your enemies flying into the screen. You can even be kitted out in the Big Diesel, a steam-punk form of attire that pleasingly makes short work of any approaching foes; just make sure you don’t overload the system though. You can even fling a shuriken of needles whilst dressed as a kung fu’d cactus!

The fighting mechanics are easy to execute, with the face buttons being used to perform all manner of moves from jumping, punching, kicking and ground-pounding. The shoulder buttons perform a dash, whilst the right analogue stick rolls your character in an evasive manoeuvre; a move especially useful when face with some of the bosses that perform ranged attacks. Stunned foes can be finished off with a quick push of the ZL/ZR buttons whilst certain positions, techniques and meter fills perform a variety of satisfyingly spectacular series of slowed-down, close-up throws, kicks and punches.

The simplicity of the control scheme produces an easily-accessible title which will soon have you slicing and dicing your way through the hordes of enemies like a knife through butter. Despite its simplistic nature, there’s a massive amount of variety on offer here with enemy types, combat moves and weaponry. It isn’t always all about fighting either, as within one of the boss battles and a personal favourite moment within the game, the combat soon gives way to a very comical dance-off between Shaq and the boss.

Speaking of comedy, this is a game that is absolutely saturated with hilarious moments; some parodical, some politically incorrect and some aesthetically presented. Cut-scenes are nicely done, with a cartoon style that produces likeable characters, all of which is delivered with some good voice acting; even Shaquille O’Neal lends his voice in a number of plot exposing scenes. It all adds to produce a title that entertains and excites throughout the course of its length. 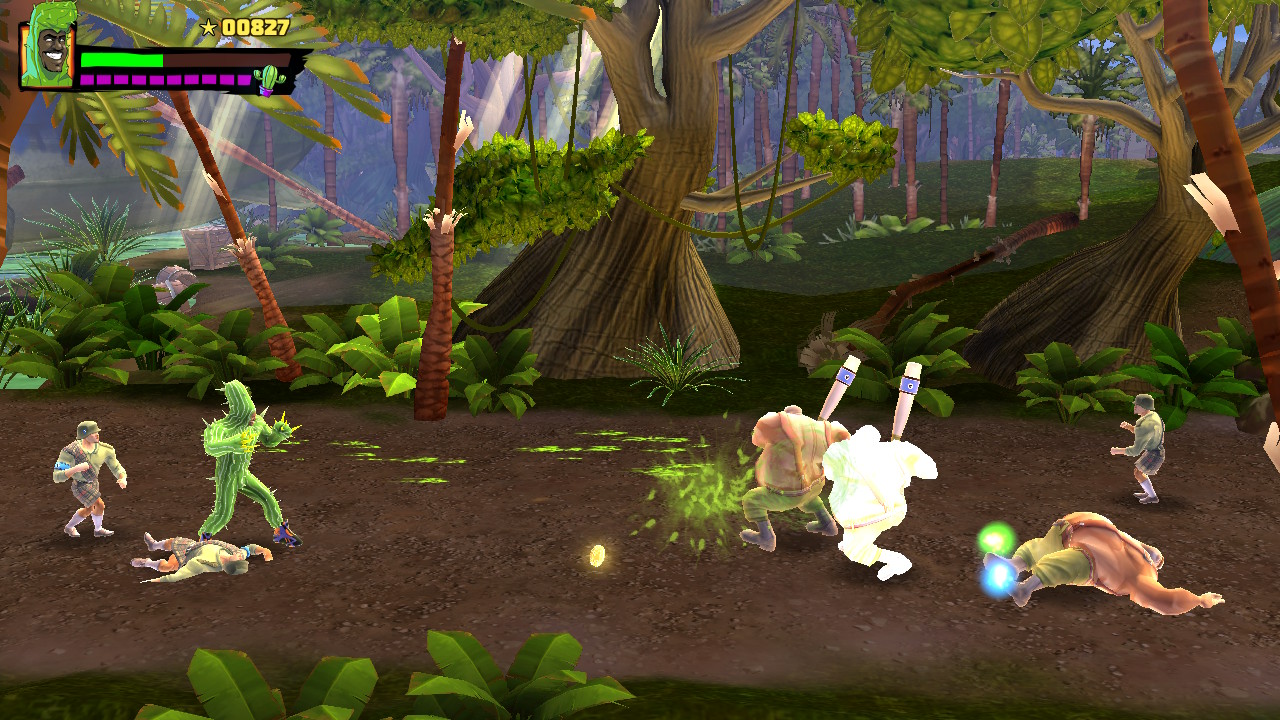 A Shaq-o-pedia contains a wealth of information regarding enemy types and special items found throughout the game, as well as a presenting a menu of re-playable movies from already unlocked cut-scenes. Information about each specific enemy type is unlocked as you encounter them, each one containing a bio that follows in the same comedic style as many of the game’s other features.

If there’s one down side to the game, then it’s the fact that this is only a single-player experience. It’s a missed opportunity here from the developers, as it screams out for a local multiplayer element to add to the fun that can be had with this game. This can also raise question marks over its long-term appeal too, as once completed, there isn’t really anything to draw you back in, apart from replaying on another difficulty level. There aren’t any collectibles really, the Shaq-o-pedia can be filled with one playthrough and there’s no levelling-up mechanic with which to incorporate a new-game plus. One more small fault I found with the game, albeit it’s a very minor issue, was navigating ‘up’ within the menus seemed to lag when using the analogue input. However, using the D-pad worked fine.

Overall, Shaq Fu: A Legend Reborn is a really entertaining title that contains a lot of variety in its mechanics and elements. Its control scheme is instantly accessible, often producing a range of fighting moves with relative ease. Everything here is superbly presented, with a very pleasing aesthetic to the background and foreground imagery, animations and character models. Its audio qualities match its visuals too, with a listenable soundtrack throughout and even a rap performed by the big man himself on the game’s opening menu. The most important element that the game contains though, is that it’s pure, unadulterated fun to play through and although it’s long-term is questionable, you’ll certainly get a kick out of the time that you do spend within the game.