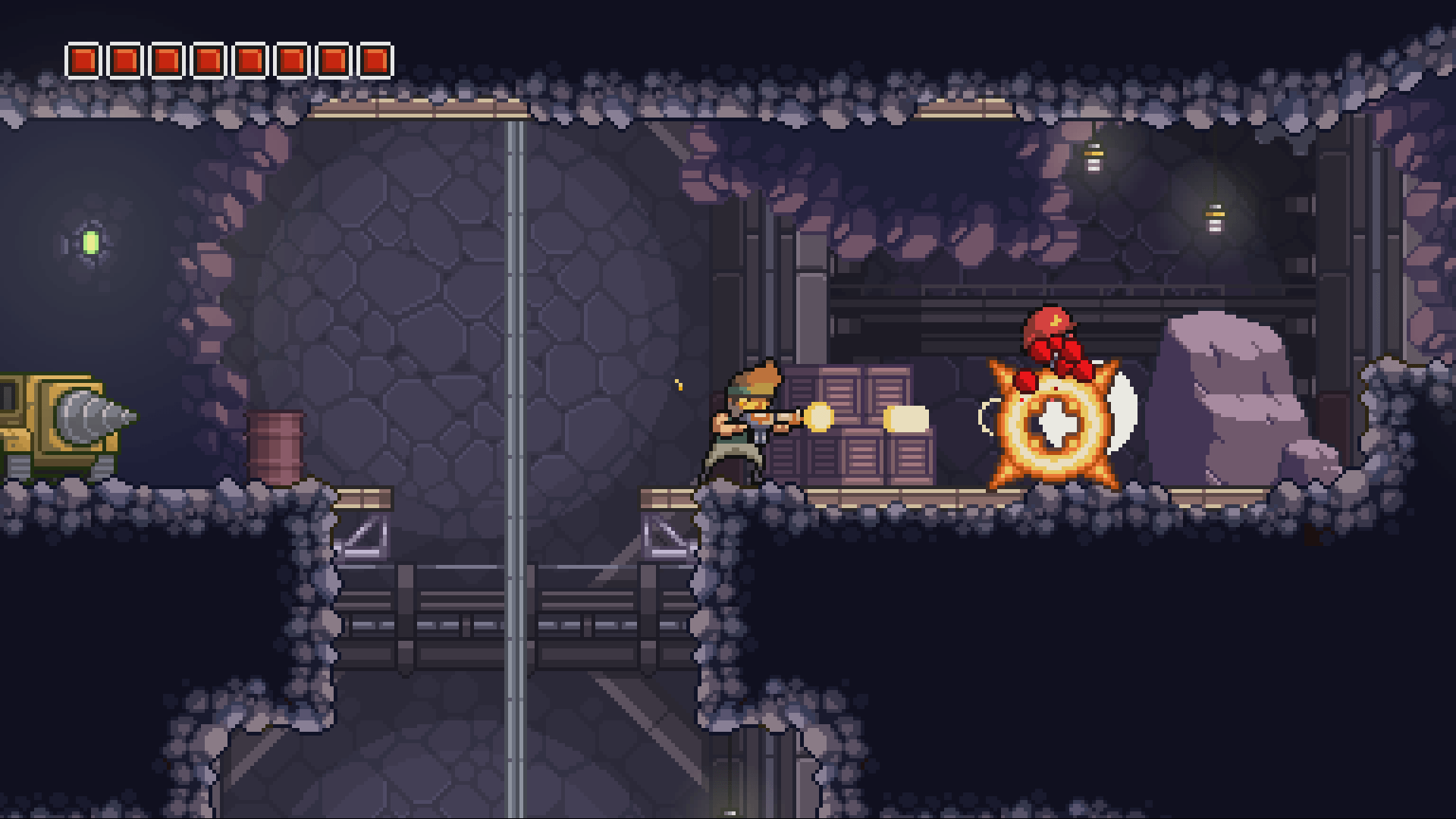 In recent weeks I have downloaded multiple titles, which have absolutely slaughtered my hard drive’s space. First was Prey 2, which was over 40GB large, then the nearly 70GB Call of Duty Black Ops III, and lastly, the nearly 60GB Rainbow Six: Siege. But among all those monstrously large games, I have also downloaded some smaller titles, and one of them, namely Omega Strike, was incredibly tiny, that I am still baffled by it. As the Omega strike, in its entirety is just over 70MB, which is incredibly surprising – especially for the modern standard.

At first sight, Omega Strike appears to be a yet another Metal Slug clone, as it is a 2D, combat driven, platformer. And if that was the case, then the 70MB file-size would be more than justifiable. But while Omega Strike may appear to be a modern, spiritual successor to the aforementioned Metal Slug, it is in fact closer in its substance and form to the Meteoroid series. As Omega Strike, while heavily relying on its combat and platforming, also features a steady amount of semi-open world exploration.

The world of Omega Strike may not be as extensive and profound as the one of Meteoroid titles, or the Castlevania series, but it is robust enough to provide one with some challenging exploration, and satisfaction through it. And while initially it leads one to believe that for the most part, you the player are going to be exploring a military conflict, the like you had a chance to previously experience within the world of Metal Slug, then you may be surprised that for the most part, Omega Strike revolves around sci-fi themes, as the title in question is full of caves and caverns, futuristic super-villain bases, and a plethora of monsters and other malformed creatures. 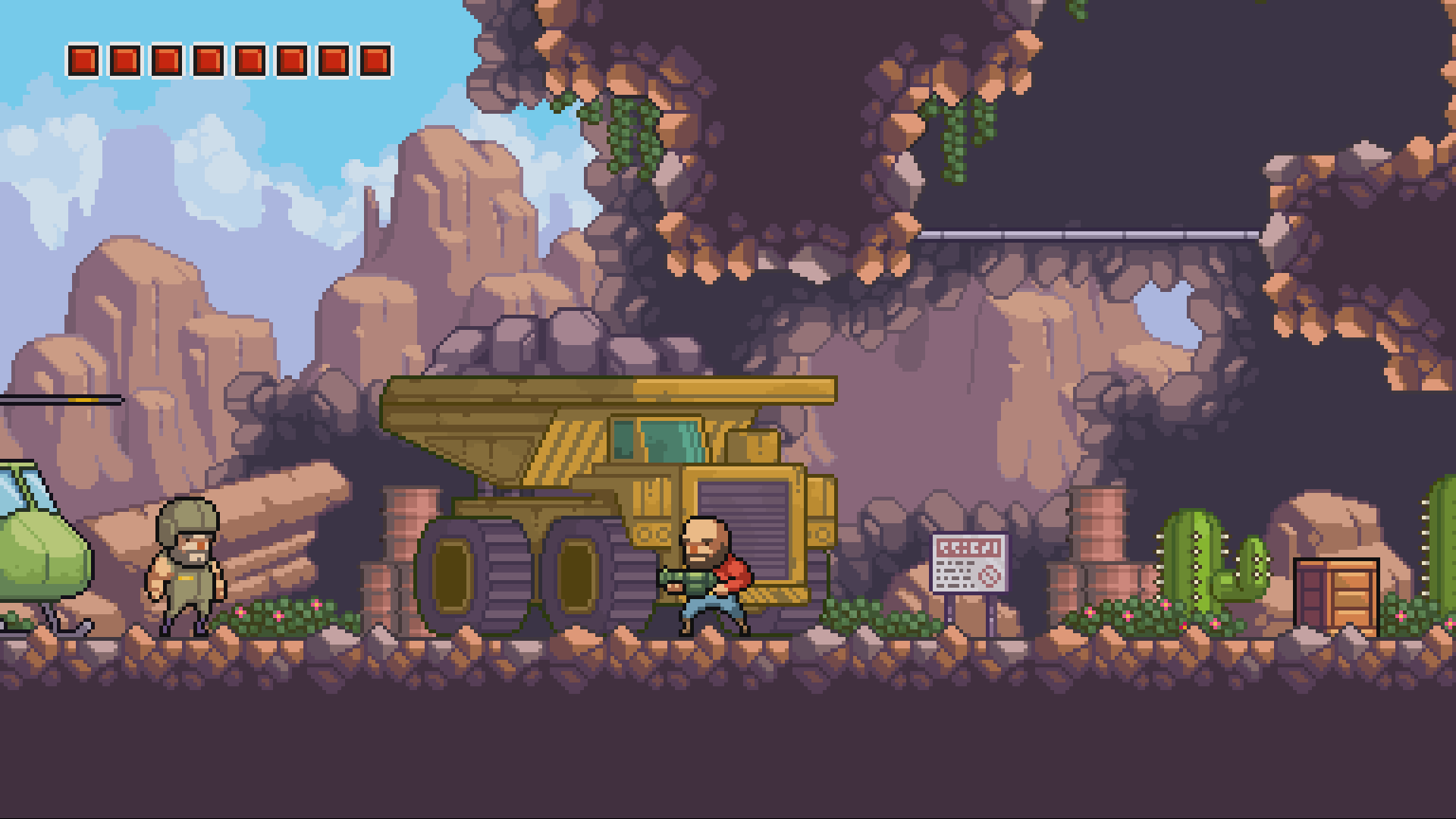 When it comes to the aesthetic sight of things, then it has to be said that Omega strike is consistent throughout, as it maintains a steady, pixel based art-style, from the very beginning until the very end. And while the said art-style does possess some form of detail, it is largely bland, and won’t inspire awe in most players. In addition to its simplistic nature, the core aesthetic of Omega Strike is also incredibly limited, as what you’ll see within the first ten minutes of starting the title, will be with you until the very end. And yes, the developer behind the title has tried its hardest to mask its visual limitations, but the variety which the studio has produced is limited to varying color schemes, rather than object models.

Omega Strike’s audio-visual facade, is for the most part one of the weaker sides of the title. But considering that it is a Meteoroid style game, then it is important to remember that it is more about the exploration and self-accomplishment, than simple sensory satisfaction. And while Omega Strike does provide one with a world to explore, and conquer, such is just as uninspiring as the title’s audio-visual facade. And that’s not because it is poorly executed, or designed, but simply because it is limited by the constraints which have been clearly created by the title’s minuscule file size.

A the beginning, when you first get to meet the title’s three main characters, and explore the world with all of them. Omega Strike appears to be largely enjoyable and incredibly entertaining. As the constant switching between the three unique gun-men adds a layer of flavor and complexity to the otherwise mundane, and straightforward game. But the initial impressions soon begin to wither, as the title’s limiting nature soon comes into play, and stomps out any joy or excitement within the player. And things go from bad to worse, the second Omega Strike removes two out of the three playable characters. 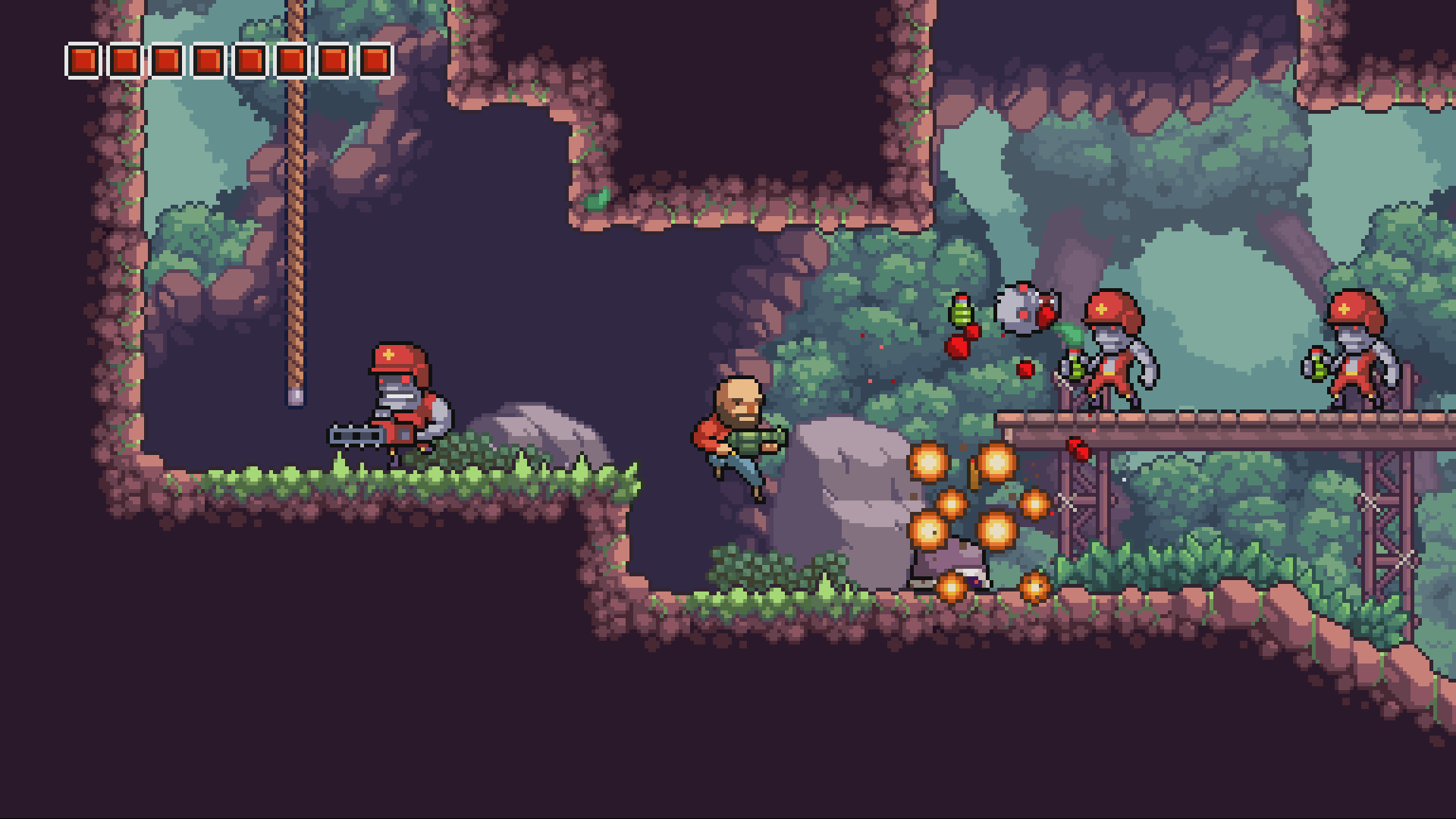 The beauty of good and great video games, is the fact that they allow you to play the way you want to play, despite of their scripted and pre-determined nature. The Last of Us allowed you to balance crafting between healing items and lethal equipment, Grand Theft Auto’s open world allows you to approach any mission in any way you desire, but Omega Strike, doesn’t want you to do any of that. It simply wants you to play the way the developer has envisioned, and by removing the two playable characters fairly early on, it has turned the otherwise enjoyable game, into a limiting slog hampered by poor game design.

Sure, with time, you get to recover both your teammates. But the journey to that point feels incredibly limiting and is for the most part un-enjoyable. And the developer tried to spice things up with addition of upgrades, but such as just underwhelming as the remainder of the title. And for the most part, the upgrades system is just another chore, which you have to keep a track of. And while there are upgrades a plenty, then it has to be said that they are all minimal, and you’ll have to spend hours in order to get a feel of any noticeable difference. But by then, most who purchase Omega Strike will most likely quit.

Omega Strike is by no means a bad game. I’d even go as far s to say that it is fairly unique in terms of its approach to minimalist game design. But minuscule file size, cutesy aesthetic are not enough in order to compensate for the title’s other shortcomings. And while such are brash, and incredibly poignant, they ultimately do not drag the title down to obscurity. And while it is a far from being good, or even above average, Omega Strike is still is consistent enough in order to warrant itself a place on modern digital store fronts. And if you love the concept of Metal Slug, then you will more than likely fall in love with this particular game, but maybe not for its current asking price of $12.99/£9.49.