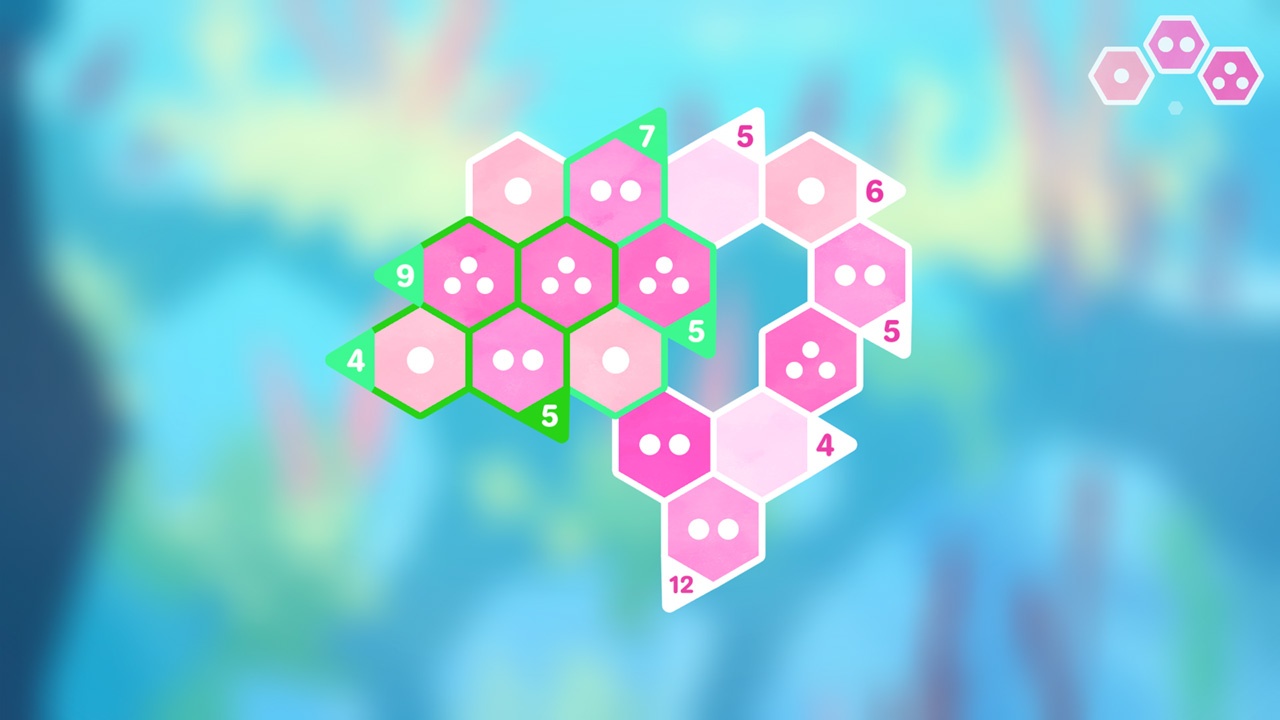 It’s probably a reasonable presumption to say that the majority of video games contain heart-pumping, adrenalin-inducing moments within their gameplay; be it a shooter, racer, platform or adventure game. So, sometimes it’s nice to just take a breather and relax with a game every now and then. Hexologic, a sudoku inspired puzzler developed and published by MythicOwl, is one just title; presenting a relaxing experience with its soothing visuals and audio qualities, yet balancing it off with a puzzle element that isn’t too taxing on the old noggin.

Much like sudoku, this is a game about numbers. However, instead of creating a row or column on a series of grids, Hexologic uses a series of hexagonal shapes to create a very different, yet extremely playable, take on the popular numbering premise. The mechanics remain the same; filling in a series of blanks with numbers that add to produce a required total. By only utilizing the numbers one, two or three, each of the hexagons need to be filled with one of the above numbers, until a total at the end of the hexagonal sequence is reached. This limitation on the number selections produces a nice balance to the difficulty of this title, often resulting in moments that require some thinking, yet produces a solution that is never too far away.

The game starts off with a very basic sequence of puzzles to complete, It’s simplicity matches the aesthetics on offer too, creating a nice, easy start to the proceedings with a very relaxing feel that soon draws you in. As you complete each sequence, you move onto the next set as it progressively, yet at a nice pace, gets increasingly difficult. However, despite finding the odd level or puzzle not working out to your expectations, a quick experimentation with number positioning soon produces a winning result. The game rarely feels frustrating, something that often comes attached to many puzzle games and with a little bit of thinking and studying of the shape’s dimensions, soon reveals a path that can be followed with particular ease. 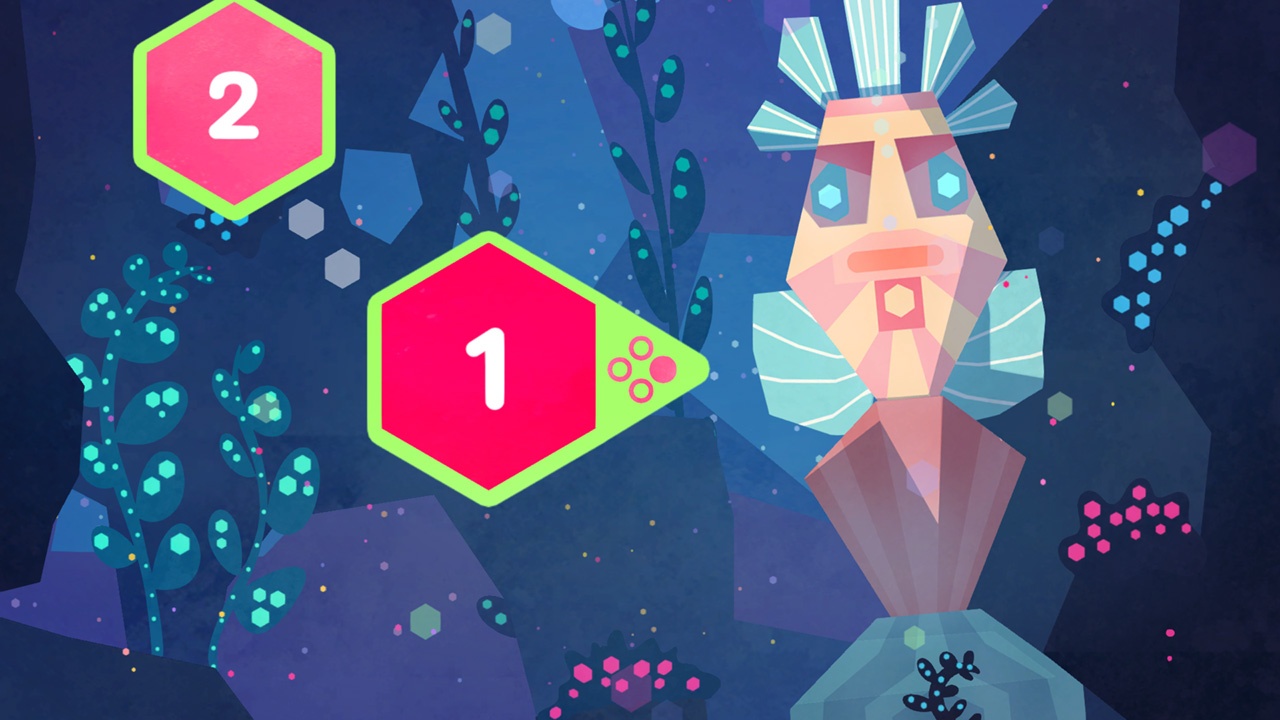 It all adds to produce a game that simply keeps you playing, as you soon begin to revel in the cleverness of your own logical thinking. Number selection is performed in a sublime fashion, with a control scheme that binds Y, X and A to numbers 1, 2 and 3, respectively. Navigation is performed with the left thumbstick, whilst the L shoulder button reverses your moves in sequence should you make a mistake. It produces an easily accessible control scheme that soon becomes second nature in its mechanics.

It’s all presented on very atmospheric backgrounds too; one that takes you on a journey from the depths of the ocean to the tips of the trees of a rain forest. It also contains a matching soundtrack that soothes and fully complements the colourful, cartoon styled aesthetics of the game; its tones changing with the ever differing environments on offer. It all helps to combat any form of staleness or repetition within the game’s design; an element of the gameplay that works particularly well.

In all, Hexologic takes you on a journey over distinct locations, incorporating a total of over sixty levels with which to tax your brain. Admittedly, at least for me, it didn’t take too long to reach the end of the sequence of puzzles that the game contains. However, to add further to the challenge, a timed-mode can be accessed to add an element of urgency to the proceedings. This mode creates a very different feel to the game and one that takes away the relaxing elements of its original premise. 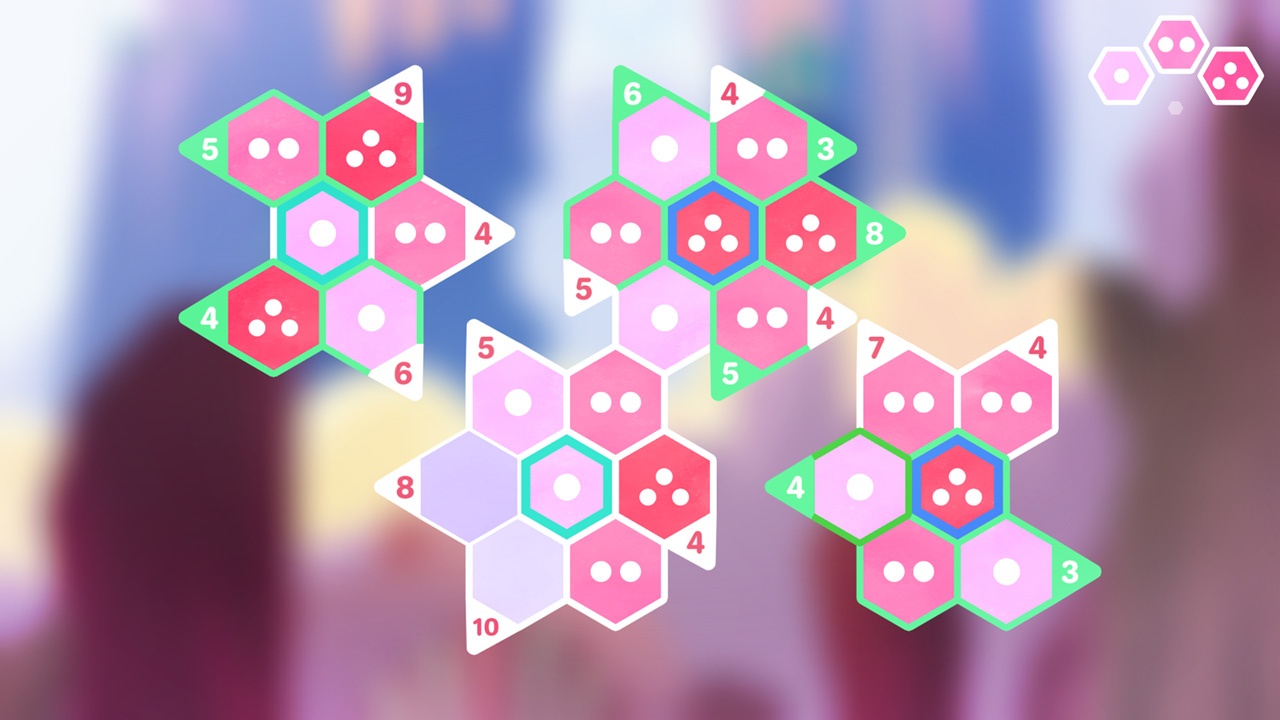 The game contains a certain charm to all of its elements and mechanics; pleasing visuals, smooth controls and a series of puzzles that are a joy to work out. It all adds to produce a game that can easily become a benchmark by which all future puzzle games should follow. Its finely balanced difficulty promotes a feeling of satisfaction, with a solution that can be easily worked out with a bit of careful thinking and, should you make a mistake, contains a mechanic that makes it easy to adjust your number sequences so that they run in a more uniformed manner.

Its pocket-money pricing makes this a hard title to resist. It sits perfectly on the Nintendo Switch and shows a perfect example of a casual style of gameplay. If you need a break from the hustle and bustle of many adrenaline-fuelled titles, then Hexologic creates the perfect ambience for such an escape. If you’re a fan of Sudoku styled games, then this is a title that will satisfy you immensely; the same can also applied if you like puzzle games in general.

Overall, Hexologic  is a simple little title that charms and satisfies throughout all of its elements. It’s also fantastic value for money, although its series of levels may not take too long to work through; although it’s timed mode can prolong the experience. It offers a nice experience with its relaxing pace, with a graphical presentation and soundtrack to match, which simply adds together to produce a title that soothes the old grey matter, rather than frustrate it with head-bangingly solutions to its puzzles. In other words, just buy it for it’s a no-brainer really.