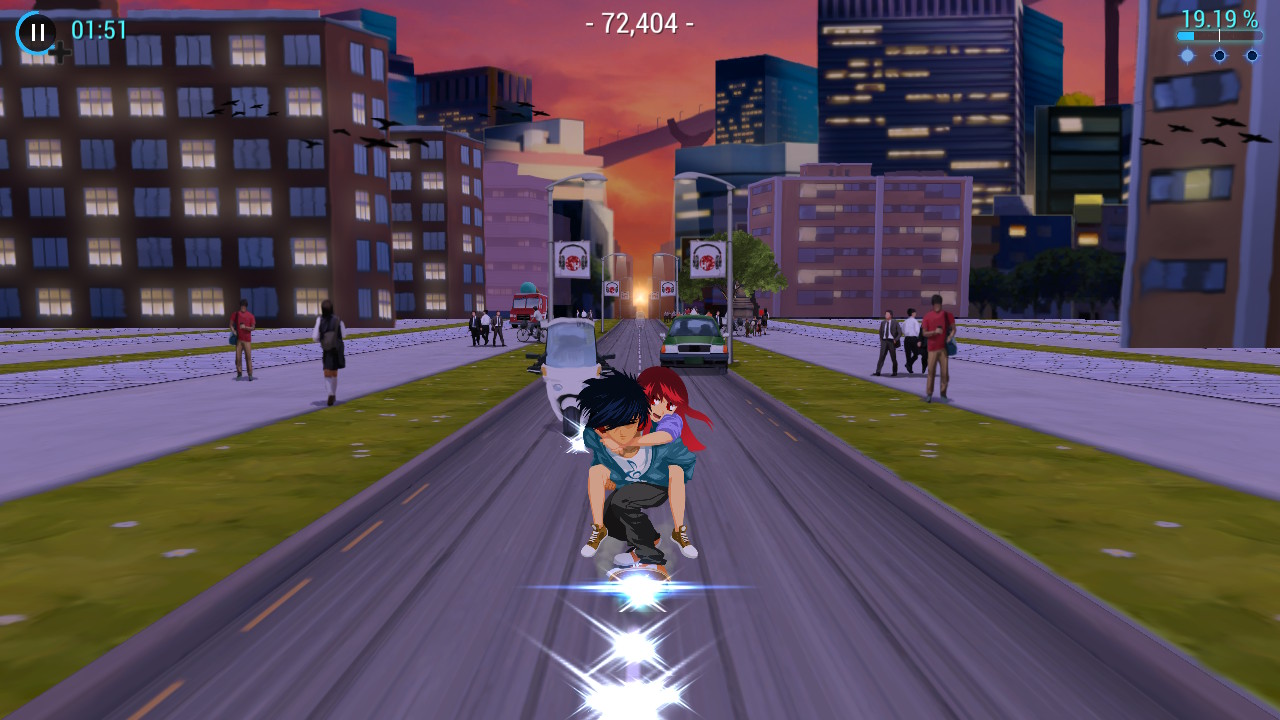 Do you remember what it was like to be young? For many of you, of course: you’re still young, still in the thrones of the agony and ecstasy of your brain and body running wild. You are limitless, uninhibited, full of potential and possibility and neverending future. But there is a dark side to it all, and your joy and rapture can be equally matched by your despair and pain. There are moments and times that never go away, not really, and those memories, both light and dark, can be stoked and rekindled even decades in the future. These feelings remain, even if they aren’t tethered to a clear memory, and you’ll find those feelings awakened by Lost in Harmony.

Lost in Harmony is a double story, but the original tale, the most important one, is Kaito’s Adventure. Kaito is the male protagonist we see in the thumbnail, and he is friends with a girl named Aya. Kaito is a teenager, limited by his own resources and talents, but he does what he does best: he is there for Aya. Aya is sick, though, and her sickness weighs heavily upon her. Kaito is not a doctor or a rich man. He cannot cure her, he cannot facilitate a cure. But he can talk with her, make her smile, give her the best day possible with what he has. And, at night, he dreams, and his dreams with Aya take on a new world entirely.

The secondary story, M.I.R.A.I.’s Escape, serves as an important counterbalance to the heaviness of Kaito’s Adventure. M.I.R.A.I. is some kind of robotic being that has a particular attunement with music. His creator, Dr. Mute, wants to keep him safe but is secretly so proud of him escaping. The worlds that M.I.R.A.I. visits is deeply affected by the music it puts out, and everyone waits with bated breath as to what the little robot will bring for the future of this planet. I mean, the robot’s name is the Japanese word for future, so I think it’s good, but whatever. It’s a cute little counterbalance that feels a lot like Lilo and Stitch but without the lost parents subplot.

The main gameplay of Lost in Harmony revolves around the most interesting blend of movements in this rhythm gaming environment. You move across five lanes, weaving between objects and even jumping over them on occasion. There are trails of glitter that are called Star Dust that you need to collect to maximize points. You can absolutely accidentally fall off the sides of the lanes, and some stages even have a sloped effect so that you’ll purposely tilt if you aren’t paying attention. Additionally, the lanes are intermittently broken up with button sequencing that appears on the screen that USUALLY doesn’t interfere with the main “move and survive” mechanic, but there are a few times that it does, and annoyingly so. Each stage also has three spheres to collect as kind of a target goal (and the only way to unlock additional stages when playing M.I.R.A.I.’s story), and two levels of difficulty. 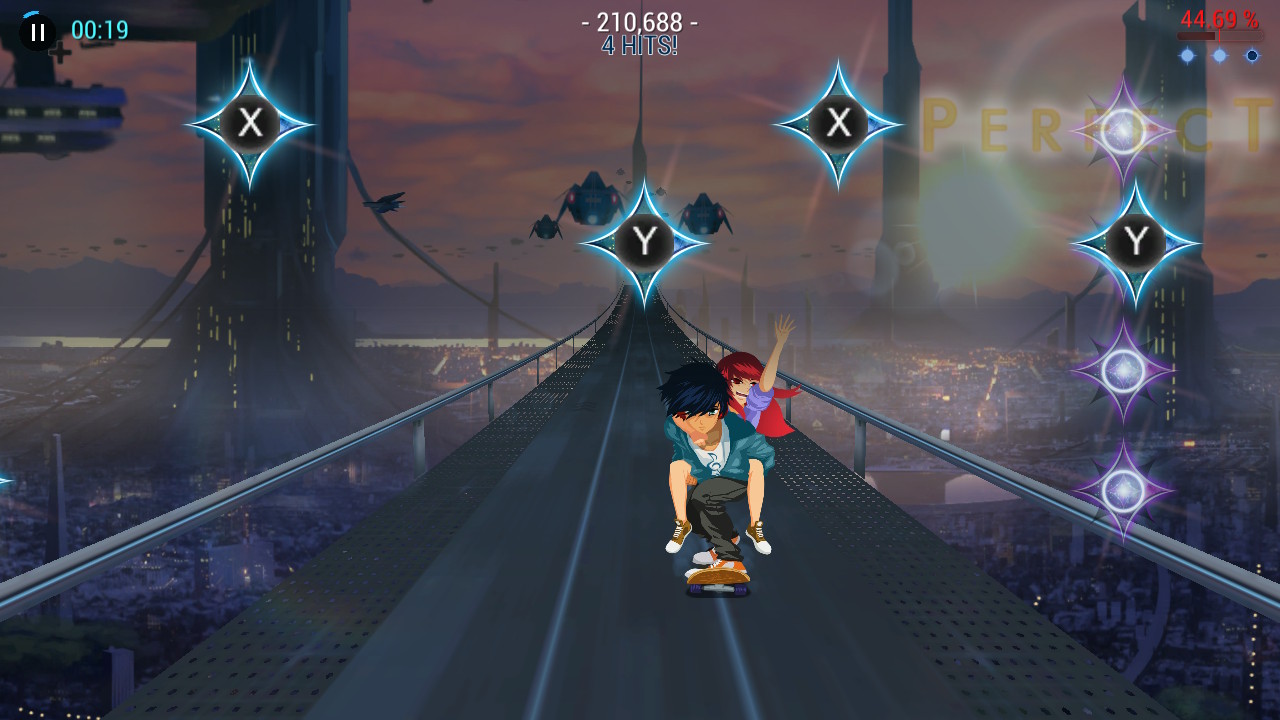 Let me say that the difficulty balance of Lost in Harmony is one that does feel like it swings all over the place. Playing on normal is a situation that sometimes feels like you can autopilot early songs without much thought, but then things suddenly get dramatically hard without much warning about halfway through. There are multiple times where the developers, Digixart, felt there was only one clear path that the player should be able to navigate through without collision, and left it impossible to choose another situation. But your character isn’t the fastest being to swap between lanes, so you’ll often end up getting clipped by cars/motorcyclists/giant rocks/etc. Hard mode is another beast entirely, leaving you in situations where just trying to pass becomes more of a chore than getting a high score. Get below a 50% as an overall tally at the end and be forced to replay the entire level. Given that jumping actually freezes your score, you can’t just spend the whole level up in the air, and jumping also does nothing to help with the onslaught of button combinations to mash when the key sequences begin. Despite the cute aesthetics and the happy-go-lucky feeling of M.I.R.A.I., everything is deadly serious when it comes to the musical aspect of the game.

Although, I have to admit, as someone who played the mobile version, the touchscreen moments being mapped to buttons actually makes the game MUCH easier to play and more enjoyable. The way the buttons are laid out and the game controlled makes it simpler for players to concentrate on lanes and dodges instead of which buttons will come next: you can easily remember, through peripheral vision, what to press as it approaches. Not to mention the sequence is incredibly forgiving on input timing. If you don’t care about high scores, you can mash the appropriate button as soon as the star shows up on the screen. It’s not the most elegant approach, but I think this was the best solution for newcomers and veterans alike.

As for the soundtracks, I’m very intrigued by how the two are divided. Kaito is privy to some beautiful remixes and blends of electronically augmented classical tunes, such as In the Hall of the Mountain King and the William Tell Overture. There is never enough of a track to simply call it a cover, but there are wonderfully long versions that really capture everything that’s happening on Kaito’s side in his dreams. From nods to Tetris in his dream concerning smartphone saturation to the starkly dark dream of wartorn worlds and refugees, the music and landscapes work together to paint an intense picture from start to finish, culminating in the sad, explosive world of Eternity. One track that strongly sticks out is an original composition from Wyclef Jean called Lost in Time which really captures the hopeless longing Kaito has for Aya. It’s bittersweet, really reminding us of how the player must bear witness to the dreams that haunt Kaito and how much normalcy is the goal, just being able to have a sunny day together. 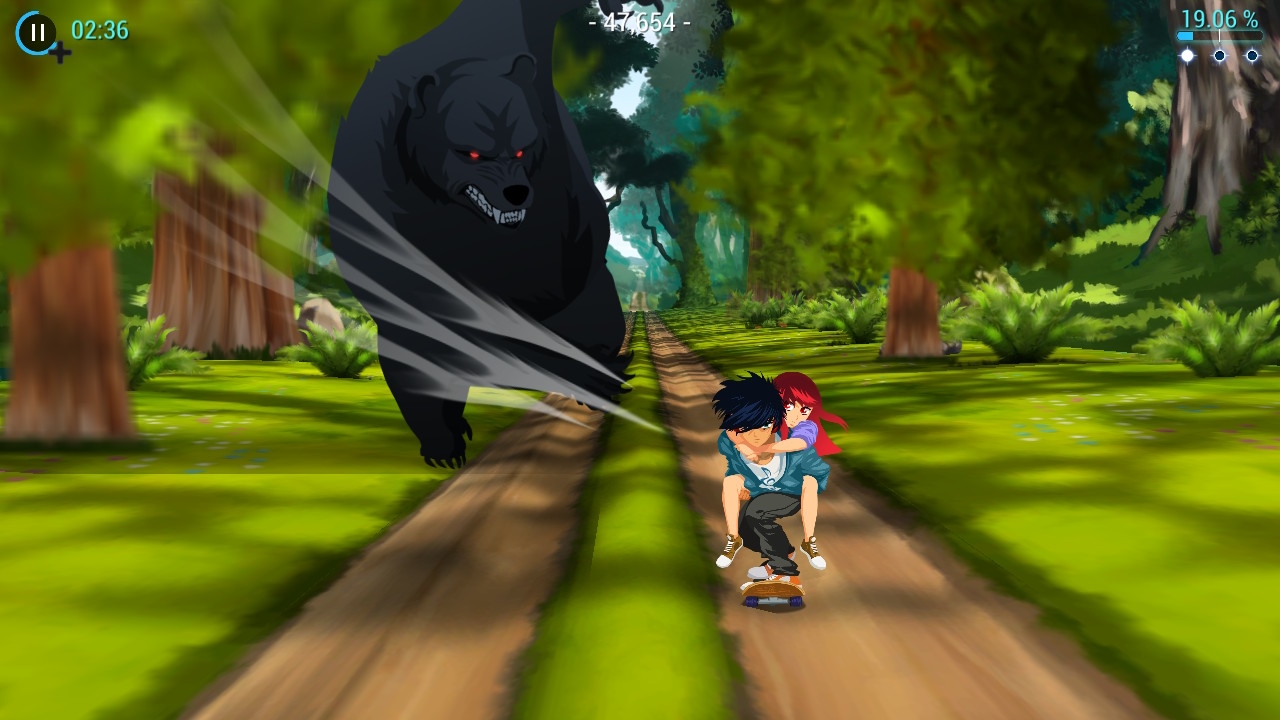 M.I.R.A.I., on the other hand, is a bombastic mix of serious techno, dubstep and breakbeat songs that help to better paint the picture of what its world is like and what’s happening on the planet and in space. As M.I.R.A.I. explores different terrains and lands, dodging incoming attacks from the ghost planet he escaped, the player is driven along by pounding, relentless music, including having its own vocal track from Laura Yokozawa. Laura’s lyrics evoke more of a eurobeat sensation, the sounds of the late 90s that capture a positive, brilliant future (again with the future!) which M.I.R.A.I. hopes to bring. The music itself is wonderful, I’m just more attuned to Kaito’s tale.

But what makes Lost in Harmony a memorable experience is the storytelling. Kaito’s Adventure plays out as a kinetic novel that’s evocative of Emily is Away meets every sad story from Nicholas Sparks. We have only a small glimpse into Kaito and Aya’s relationship, told entirely through text messages, and it’s not even clear what they are to each other; friends, classmates, something more? But we fill in the gaps with Kaito’s dreams, as we see what he hopes for, what he wishes could be, intermixed with the strife and desire of a teenager in a world he can’t control. From the first interaction, anyone could predict the outcome: but it doesn’t make things any easier. You’re secretly holding onto this tiny, glimmering hope that things will work out alright, and the game even gives you a cruel moment of positivity that is quickly crushed. In spite of it all, seeing how Kaito dreams – to hear his own subconscious raging against the reality of the situation – makes this fantastically memorable.

It’s more than appropriate for people to dismiss this port simply because it is a port, but it’s impossible to ignore the impact that Lost in Harmony creates. It’s a fleetingly short game, mimicking the plot and the heaviness of our understory, and the last track is a heartbreaker for sure. M.I.R.A.I. gives us some reprieve and makes sure that we remember there is a game underneath, and a well constructed rhythm runner at that. But with fantastic music, gorgeous design and some truly innovative storytelling, Switch owners who haven’t played this yet would do well to drop the seven bucks, clear out an hour or so and come follow Kaito’s story from start to finish. And, for just a moment, remember what it was like to dream, to lose, and to be powerless against the tidal wave of love.