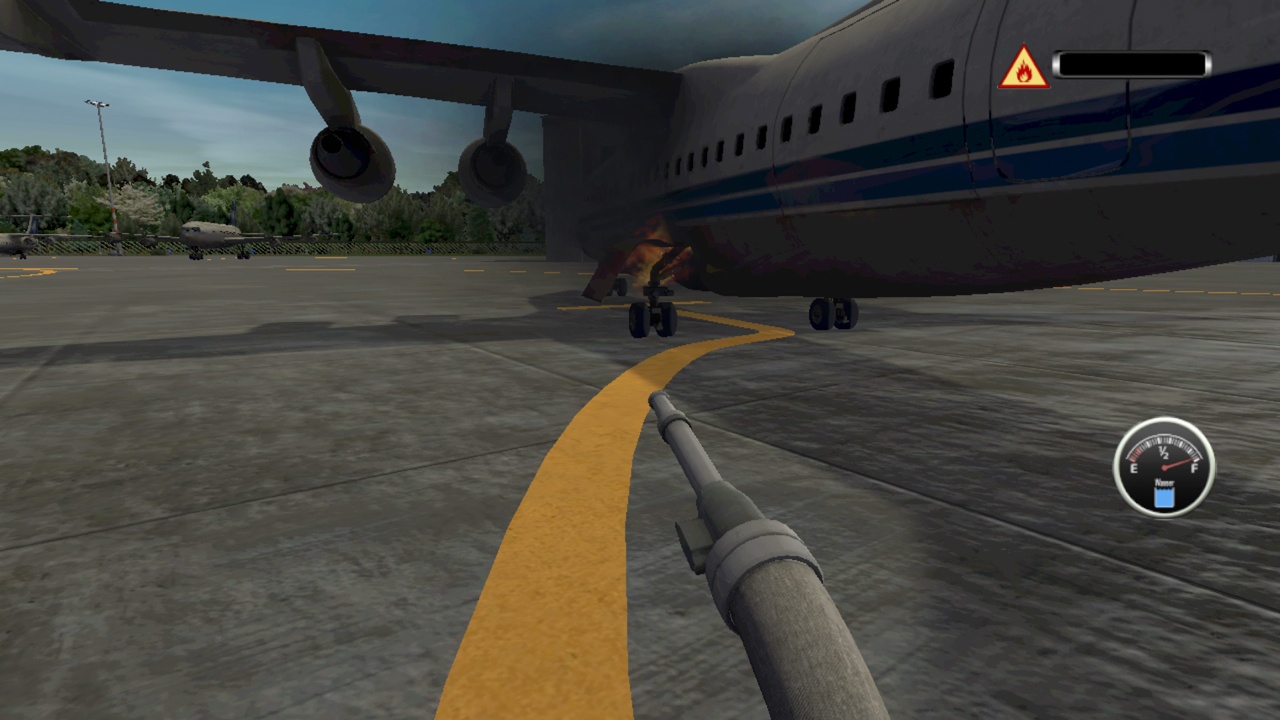 For a lot of boys out there, and girls too, the dreams and aspirations of one day becoming a firefighter is something we probably all adhere to at one point or another in our childhoods. Whether that dream ever becomes a reality is, obviously, down to each individual. But for those of us who never realised our full potential and squandered such a chance, UIG Entertainment’s Firefighter: Airport Fire Department gives us the opportunity to re-live those fantasies and step into the boots of, probably, one of the most dangerous careers within the fire-fighting profession.

The game presents a follow-up of sorts to Firefighters: The Simulation, presenting you with a first-person experience of life as a firefighter within a busy commercial airport. It follows along the same lines as the original title, even replicating some its features; some good and some, still down right awful. As before the game presents you with a tutorial of sorts, although I would best describe it as the longest tour of the airport that anyone can endure. There’s the offices, hangars, runway and the toilets, again. Why? There’s nothing wrong with trying to produce a realistic experience, but for me, this takes things a little too far and is, ultimately, a useless function within the game’s introduction.

Again, all interaction here is textualised, often performed by lifeless colleagues that contain no personas; thus deferring any attachment or immersion to the department that you are supposedly working for. Interiors and character models are bland; often showing a representation of what PS One gaming used to be like and holds as much interest as the fire chief who is showing you around. It takes far too long to get through the formal introductions; often resulting in the game being switched off before you even start. 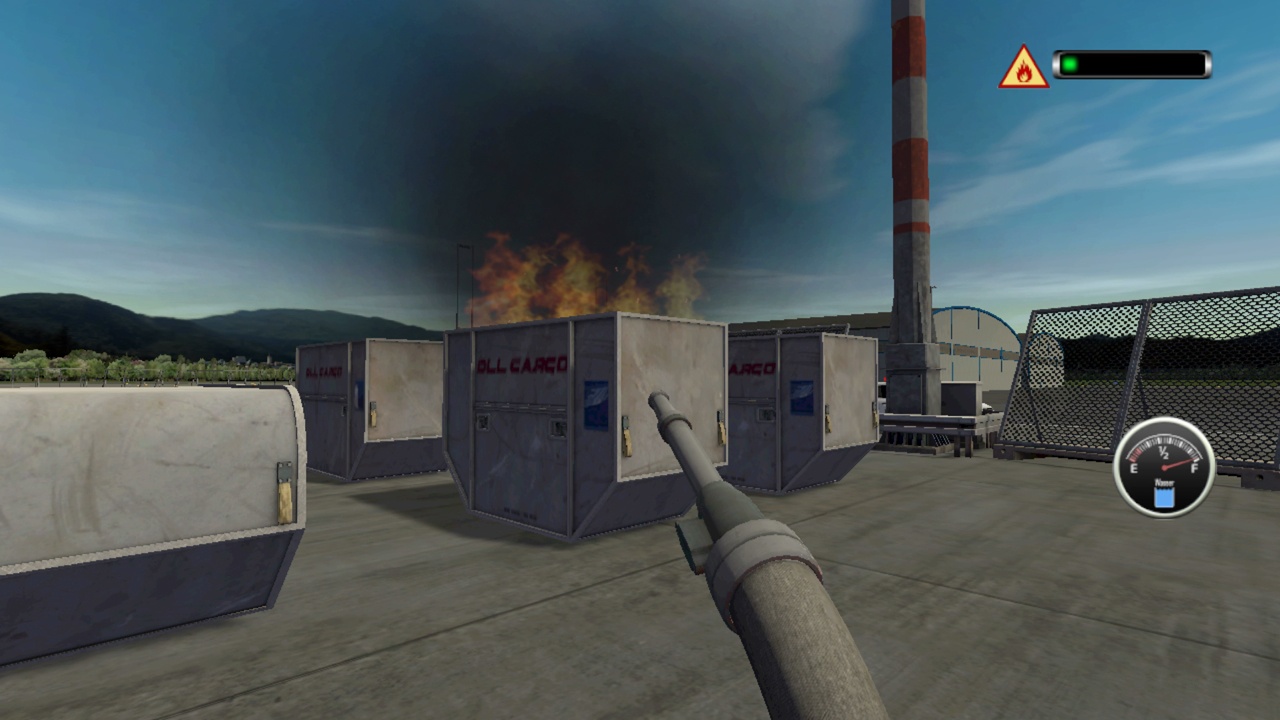 As with the first game, things do pick up a little when you acquire your first vehicle, although you are tasked with a mundane task for your first job: To check the fence perimeter for any holes. It’s hardly exciting stuff but then comes your first call over the radio, a reported fire within one of the terminals. Your heart skips a beat as you put on the blues and two’s and race across runways, avoiding the traffic of landing and departing planes, as you make your way to the emergency. However, a time constraint on how long I had to respond to the fire depleted before I arrived; forcing me to start the day again. It was hardly a realistic proposition.

Anyway, my second attempt was more successful and I reached the terminal in time, mainly because I wasn’t checking the fence properly. With gusto, I burst onto the scene in my heroic pose to be faced with a smoking ashtray beside the departure lounge! Really? I know that this is a sim but again, isn’t this taking things a bit too far? I began considering jacking in my job, preferring to change my career  to something more exciting, such as a train driver or something, when another call came in. In fact, it wasn’t long before I began getting all manner of emergency call-outs. Yet, despite my initial excitement, it didn’t take long to figure out that this was a simulation of the rinse-and-repeat kind; find an extinguisher or hose, point it towards the fire and spray until the smoke disperses. It was always the same, whatever the emergency. It didn’t take too many shifts before I found myself standing next to the runway watching the aircraft; dreaming of trains again!

Why were you just meandering beside a runway when you have a job to do, I hear you ask? Well, it’s simple really as you’ll find a lot of your time with nothing to do; wandering pointlessly as you await a new job or emergency call. Again, it may be realistic in a simulation sense, but this is a video game first and foremost and, besides, it’s not as if I’m getting paid for doing the job. I found it quite disturbing that many of the original games’ faults were still present within this version too. Vehicle indicators that have no bearing on the game, or even show up on the vehicle models, lifeless environments that are devoid of people and collision detection that allows to drive straight through other vehicles or the rare occasions where you come across another human being. 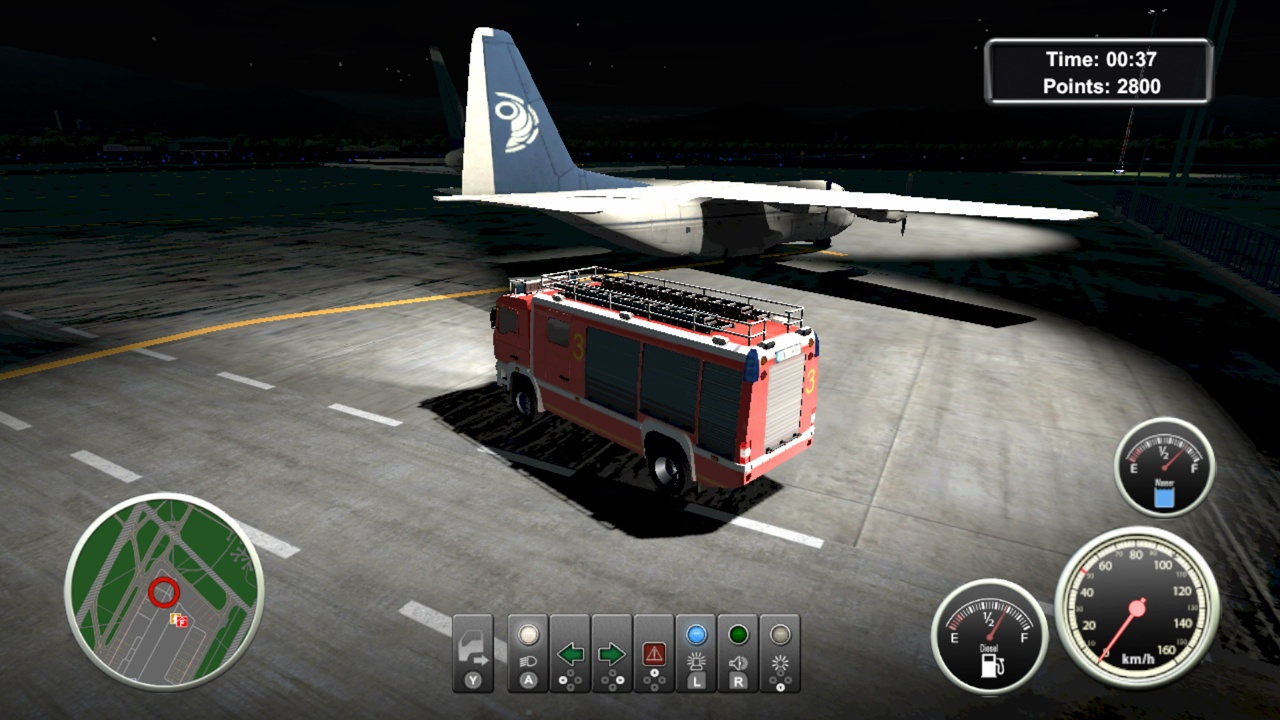 As before, it just promotes an dis-attachment to the game, creating a very false world in what is meant to be, a realistic game. For what is supposedly an international airport, it’s rarely busy; it’s certainly no Heathrow or Orlando. Saying that though, my own personal thoughts were that this version of the firefighting series was a better experience than the first game, probably because it’s all based in a smaller setting within the confines of the airport and although still pretty devoid of life, didn’t feel as empty as the city from the first game.

It follows the same mechanics as the original game, in that you embark on a progression scale that sees you promoted to using more vehicles and equipment, even being tasked with responding to more urgent and bigger emergencies. However, the main core of the gameplay remains the same and soon becomes stale in its execution. Saying that though, I will admit that some elements of the game can be fun, but in order to achieve this you have to overlook the games’ faults which is no tall order. It’s all a shame really, as I so wanted to enjoy what this game has to offer, but in its current state as a simulation, then it simply fails to pull it off.

Overall, Firefighters: Airport Fire Department can be a good game at times, although it does contain too many glaring faults to make it an enjoyable experience. It does improve slightly on the game’s first outing, but only because it takes place in a smaller area, thus making it less difficult to get lost. However, it still contains puzzling objectives that cause you to question what you need to do. It’s clear to see that this game tries really hard to pull of simulating the life of a firefighter, but with too many unnecessary inclusions, broken mechanics and an overall unfulfilment in its core gameplay, this is sadly a game that is difficult to recommend.