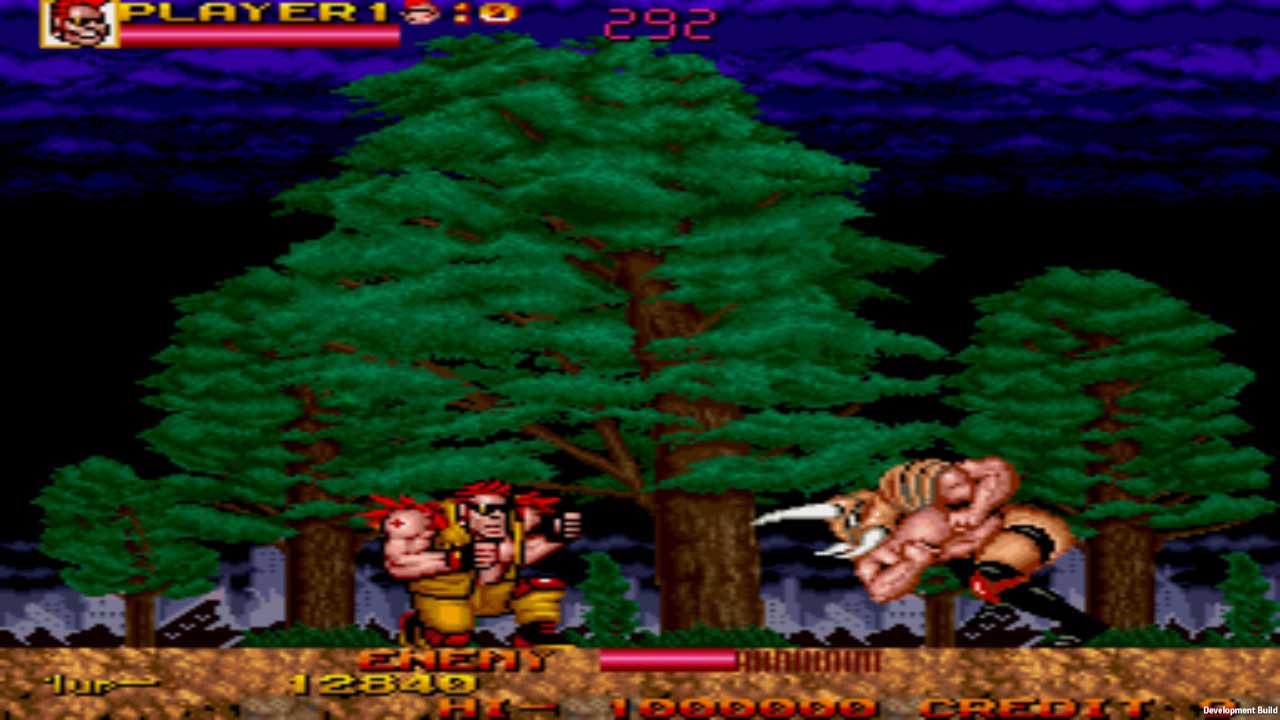 The world is always in need of balance. For every ying, there is a yang. This also applies to video games: careful balance in a swaying pendulum of life. For there to be Mario, there must be Bowser. Link needs his Ganandorf. Animal Crossing and crippling debt slavery. And, even in the world of arcades, the balance continues. So, just as Johnny Turbo brought us the original Bad Dudes, it seems only fitting that Flying Tiger Entertainment also bring the saga of Two Crude Dudes.

Firstly, Two Crude Dudes isn’t the actual anthesis of Bad Dudes, but it’s pretty messed up nonetheless. There was a nuclear explosion in 2010 that destroyed and irradiated New York City, and that was generally a bad thing to have happen. Twenty years after the fact, the government is ready to move in and reclaim the city, but a giant gang of punks, mutants and freaks, called Big Valley, have decided to claim it as their own. Because things like the army and non-nuclear missiles are impossible in times like these, the government instead turns to two stereotypes from the 90s to win back the city. They are the Two Crude Dudes, who have sunglasses, mohawks, massive muscles and no names. That’s right, folks, it’s another sidescrolling, co-op arcade brawler, and this one is…okay. 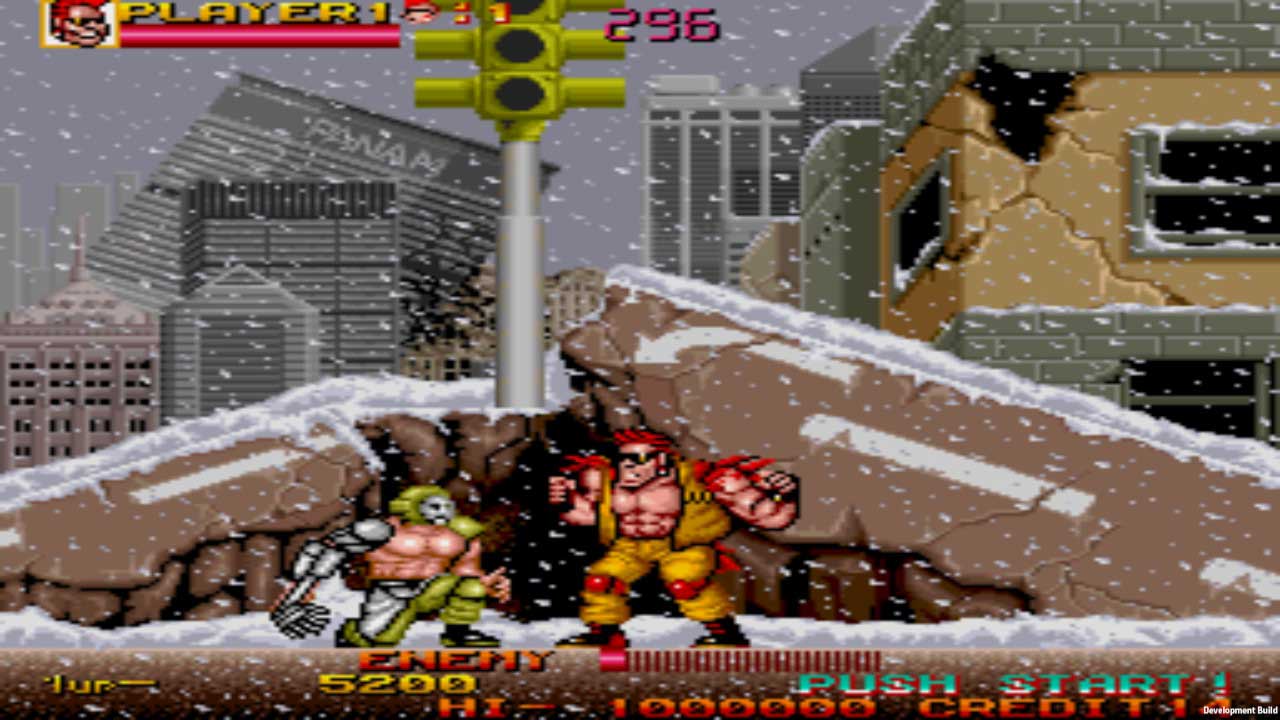 So, for the good, Two Crude Dudes is a hilarious snapshot of what designers and executives thought people wanted to play at the time. Originally titled as simply Two Crude, your characters look and feel like you’re controlling Bebop and Rocksteady before they get turned into animals. You are this massive, muscular wall of a person who punches their way through anything, including arsonists, spider people and the evil incarnation of Jake “the Snake” Roberts, who shows up quite a few times. There’s a fallen Statue of Liberty to remind you that you’re in the apocalypse of New York, but no real explanation how it got so far inland in the midst of a nuclear attack. The brawlers have static-laden one liners that they drop every so often, and they refill their life between levels by drinking Power Cola, the choice of a forgotten generation. In terms of time capsule humor and absurdity, Two Crude Dudes is spot on and should NOT be ignored for it’s retro value. I couldn’t believe that I had never heard of this game until I realized it was a Sega console port, and I’ve been Nintendo for life, yo.

Besides the bananas concept and artwork, the thing that helps set Two Crude Dudes apart from other brawlers was it’s interaction with the environment and enemies. Sure, you can punch, you can pick up some weapons, and you have to knock down some obstacles with your fists. But there’s also the fact that you pick up everything. Okay, almost everything, but still, the number of items with the flashing words “LIFT!” above them is absurd. Rocks, fire hydrants, cars; the dudes decide to use everything as their weapon of choice. And, naturally, enemies themselves. Almost every enemy can be picked up and thrown, either as an offensive attack against other NPCs or simply a humiliating way to damage a single entity. If we’re being real, some of the bosses and minibosses are much easier to deal with by picking them up and slamming them down repeatedly instead of dodging and punching like some kind of strategist schmuck. 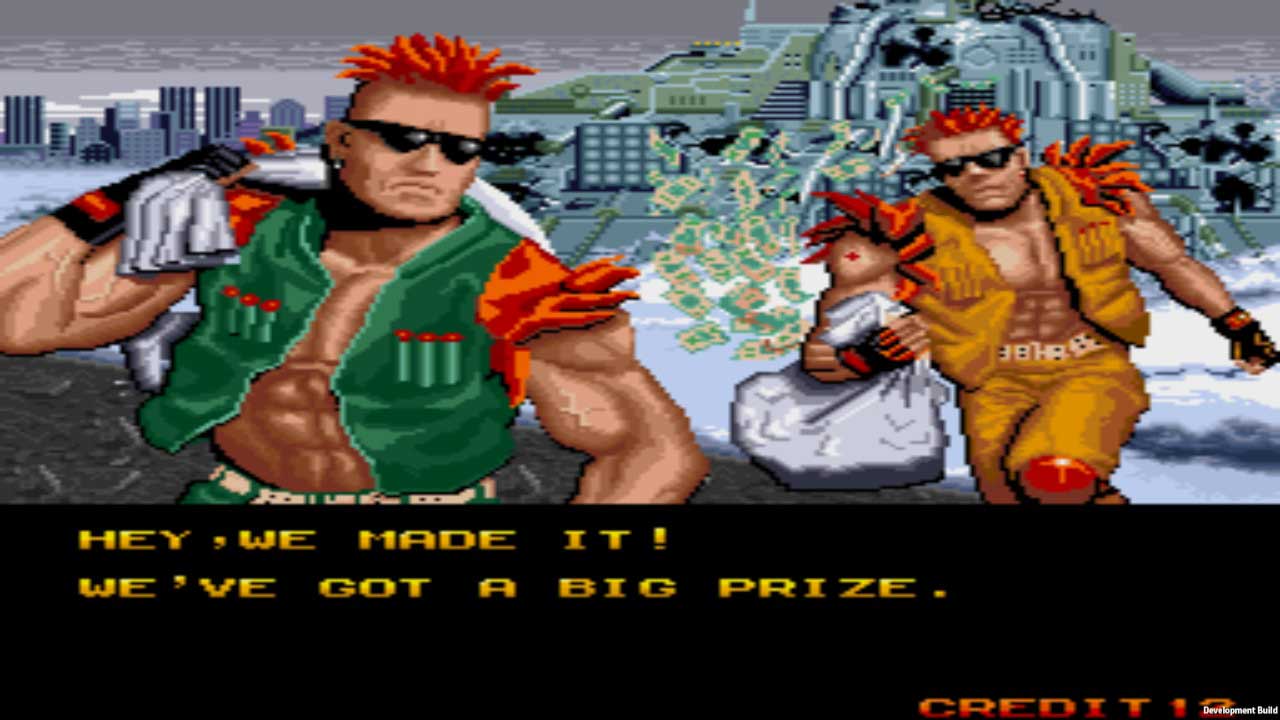 Two Crude Dudes is far from perfect, however. Once you get over the novelty of both the game’s setting and the mechanics, you realize the limitations of a lot of it. Firstly, the game works best when doing two player mode: single player is certainly doable, but the number of times that you get surprise attacked by enemies because you weren’t facing the right direction is high. Additionally, the hit boxes seem to be incredibly wonky. I’m sure this is partly due to delayed input from older cabinets and how the graphics looked on old CRT screens, but there’s a distinct buffer between where I think a punch should land and where it actually lands. Not to mention there’s a small animation whenever a Dude decides to pick up something, which results, more often than not, in me taking a sucker punch just because I’m trying to heft a busted Honda Civic over my head. C’mon, man, can’t you see I’m working on utter overkill by smooshing your stupid gang face with a goddamn CAR?

Still, this is what the 90s was all about: fighting everything and everyone and feeding quarters into a machine while you and a buddy wasted an afternoon punching mutant demons or something. Two Crude Dudes would have died on the operating table nowadays, even with people playing it ironically, but I do so love these fond looks back at what constituted a proper arcade game once upon a time. For a few bucks and no more than an hour of gameplay, this addition to your arcade collection is worth your time and effort, and it really can be a fun way to avoid re-watching the same boring tv shows by playing something insane instead. If you ever wanted a game where Escape from New York and The Warriors were clear influences, this is your game.