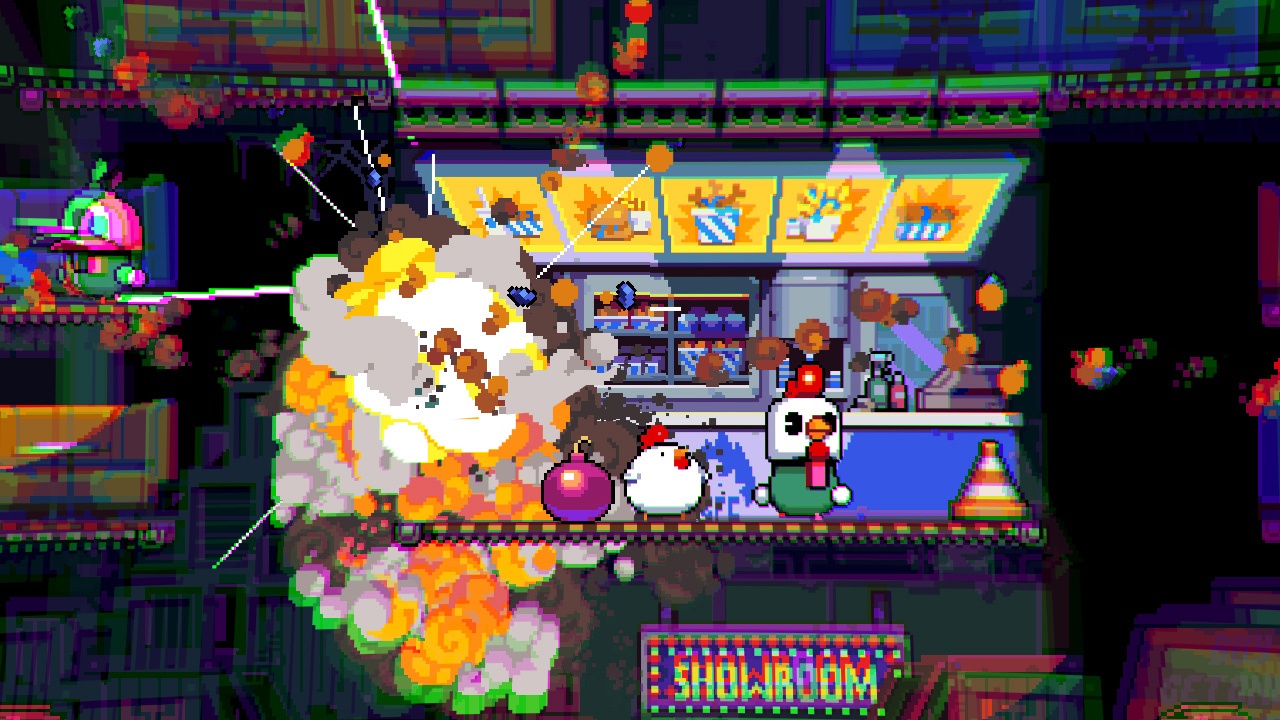 Every so often, being caught totally unprepared for something is a joy that you can’t explain to anyone in proper words. We all have surprises, regardless of the context: a party planned for us in secret, a new burger place that blows your mind, a movie starring Nicholas Cage that captures your waking thoughts for months. And gaming is usually no exception. Sure, Mario games always bring out the best in people and players, but when you find a little title from Kickstarter that sounds cool enough actually becomes something grandiose and wins multiple awards, you’re right to be surprised. So when I found a game sitting in my lap called Bomb Chicken, I had, honestly, no damn clue what to expect. The surprise that I found within was legitimate and fantastic, and I’m so glad I let this chicken sneak up on me.

BFC is a fast food chain that’s famous for their delicious fried chicken that’s been smothered in a secret blue sauce. Blue, interestingly, is a food color we’re inherently supposed to have an aversion to, and I don’t think that’s a coincidence for this game. The blue sauce has origins no one is sure about, and I think even the chickens themselves are surprised when some azure goo mutates an ordinary egg into a massive, medicine ball-sized chicken. And the chicken, for whatever reason, doesn’t lay eggs: it lays bombs. Ready to explode, infinitely produced bombs. Our chicken hero cannot jump. He cannot fly. He is full of explosives and is susceptible to being exploded himself. But, for the hens and roosters trapped in the BFC factory, he is a legendary, foretold hero. This will be the ticket out of the meat grinder of the fast food future and onward to free range freedom. This is the tale of Bomb Chicken. 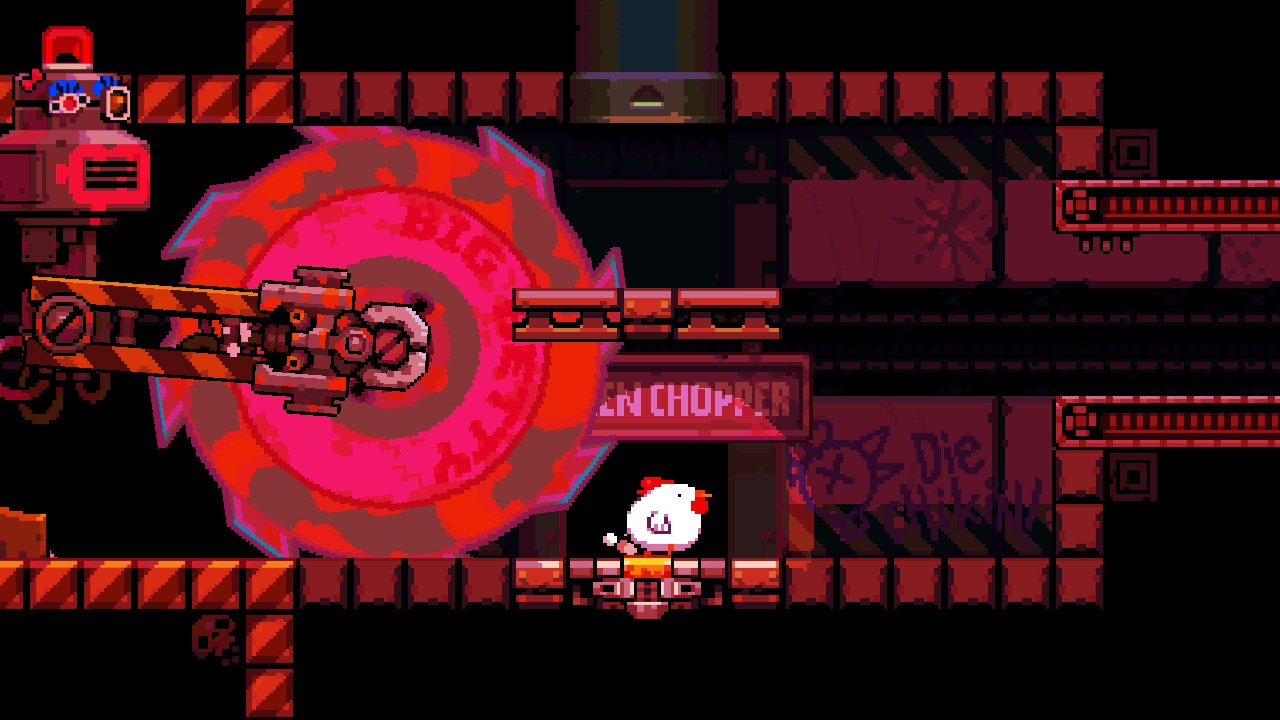 Bomb Chicken presents as a puzzle platformer to some degree, asking you to simply get your chicken to the other side and get him out of this place. Along the way, the rotund bird will need to navigate some tricky situations: after all, when you’re the biggest piece of poultry that this Kentucky fried factory has ever seen, they’re not just going to let you strut out the front door. But Bomb Chicken has everything he needs to escape right inside of him: tons and tons of bombs. What can bombs do, you may ask? Well, dear friend, I’m here to tell you. Bombs can explode and take out most things standing between you and the great outdoors. Bombs can start fires that you don’t have to deal with right away. Bombs can knockdown secret walls and trigger different effects that you weren’t quite expecting. Bombs can be stacked to reach bold new heights, because you’re a chicken who can’t jump (but can bounce in more than a few places). Bombs can be kicked to hit faraway targets, both flammable and inflammable (what a country!). Bombs can even be used as tangible objects when you need to balance out a scale or activate a pressure-sensitive panel, albeit they can only be used for a moment. After all, Bomb Chicken doesn’t push out unlit bombs. Bomb Chicken delivers the packages ready to use, and they must be used in just a few seconds.

There is such a novelty and charm about Bomb Chicken that it’s hard to figure out where to begin. First and foremost, the graphical presentation is so incredibly bang up for the insanity of the concept and execution. Nitrome, the game’s developer, has created this beautiful, high density pixel art that gives so much personality to everything you encounter. From Bomb Chicken squeezing into tight spaces to the accidental rotisserie you make if you detonate a fellow hen, the game comes alive in vibrant, spectacular colors and shapes. I think that’s the one thing that makes the magic blue sauce that goes on all the chicken forgivable is that it’s just the right color of blue. Somewhere between slime and blended Smurfs. Delicious. But everything comes right out in sharp, clear detail, making sure there’s nothing muddled or murky about what you’re seeing, not even in darker, more sinister areas of the factory (it’s a place where they slaughter chickens, you can’t expect it all to be sunshine).

Now, despite such a simple approach to the game’s mechanics, Bomb Chicken can be surprisingly involved and complex. Sure, at the very beginning, it’ll be super straightforward: use bombs to go up, walk forward, don’t be present when the blast goes off. But it very quickly becomes a matter of different bombing approaches and, more importantly, timing. You see, there’ll be a lot of times where you need to rig explosives in places that are particularly close to where you are, and, surprise, you don’t like being incinerated as much as the next chicken. It takes very little for the workers and guards and…voodoo doctors…at the factory to realize you’re a chicken amok and need to be taken down, and they change from oblivious personnel to involved members of the anti-chicken league. There’s even a few times where you’re working against an obvious clock, usually in the visage of something trying to end your life, and you need to be extremely precise with the number of bombs you use and the accuracy with your release rate. One extra button push is all you need to shove yourself into the spiked ceiling by accident and create a loss of life and a reset of the puzzle. 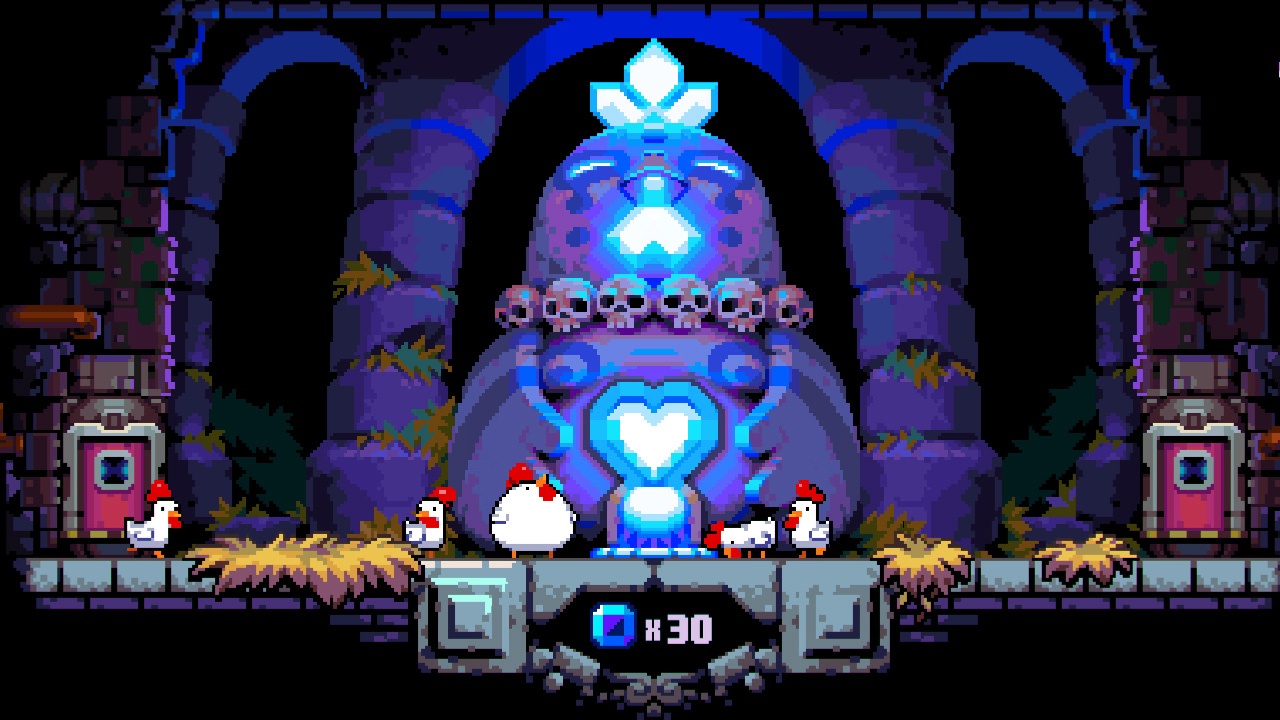 Thankfully, curiosity and thoroughness are key to surviving in this game long-term. Bomb Chicken can pick up gems along the way, because even doomed-to-die sustenance animals understand the importance of currency along the gold standard. These gems are then used to get extra lives at weird chicken shrines that are hidden throughout the factory, and these extra lives are key to learning your mistakes. If you don’t have any hearts in reserve, you only need to fail a puzzle once to die and need to start from the very beginning of an area. However, a few hearts in reserve means that you can risk a couple of experiments and failures that’ll only set you back a second or so in your scientific process. Bomb Chicken wants you to do well, but it’s not going to hold your hand. When there are new mechanics, they’ll get explained, but you aren’t just going to stumble onto solutions at the drop of a hat. Probably not, anyways.

When all is said and done, I think the replay value on Bomb Chicken is apparent and pretty important to the longevity of the game. Besides the sheer joy of watching your chicken bobble along, there’s always the chance to challenge yourself to do the puzzles better, to escape in a faster time, to figure out some way to try to jump the queue. What’s the minimum number of gems needed to get out alive? Besides which, I can easily see DLC in the future (or free update patches) that add additional areas and levels for our plucky hero to explore and liberate. In terms of music, graphics, puzzles and sheer absurdity, Bomb Chicken is a solid game, and I think it’s delightful that it’ll be out on the Nintendo Switch before seeing releases anywhere else. Here’s to hoping that Bomb Chicken has a long and prosperous life before, inevitably, blowing itself up by accident.