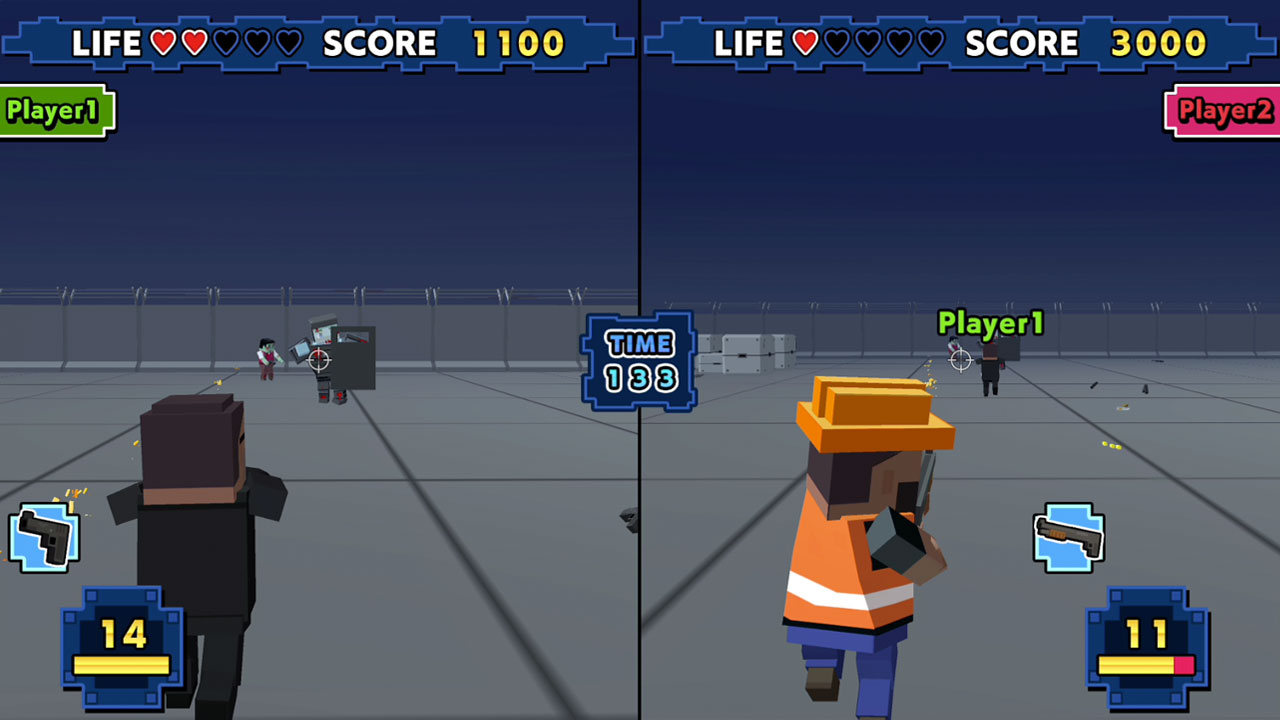 In programming terms, a voxel represents a graphical value on a grid within a three-dimensional model, or space. Much like a single block that makes up a structure within a game like Minecraft. It’s a model that is used in SAT-BOX’s new title Voxel Shot, out now for the Nintendo Switch, which incorporates the graphical style of Mojang’s game, yet contains two modes of play: One being a shooter and the other being a racing game.

The shooting element of the gameplay comes in the form of a zombie-horde style of play, pitting the player in a variety of locales as they use whatever weapons they can find in order to stay alive for the duration of its timed levels. It’s best described as a dumbed-down Call of Duty’s zombie mode, and I mean seriously dumbed-down. It has a graphical presentation that children would find enticing; although I’m not overly convinced that the content is really suitable. There’s no blood or gore here, but the morality of shooting zombies and gun-play, as well as being a tad scary for kids, is always a question-raising subject with children and video gaming.

Anyway, morals aside, the main premise of the game involves a simplistic pick-up-and-play mechanic in surviving for a set period of time from an onslaught of zombified toys. Set over a variety of four distinct landscapes, City, Forest, Train depot and Desert, you need to protect yourself from a variety of invading zombie hordes such as segway-riders, horses, dogs, pigs, rocket launching wielders, crawlers and missile-firing drones. This is achieved by picking up an array of weaponry that lay scattered around each level. These can range from pistols to mini-guns and shotguns to rocket launchers. With five lives at your disposal, each of the levels require you to remain alive in an allotted time, whilst at the same fulfilling three objectives that you are tasked with completing. 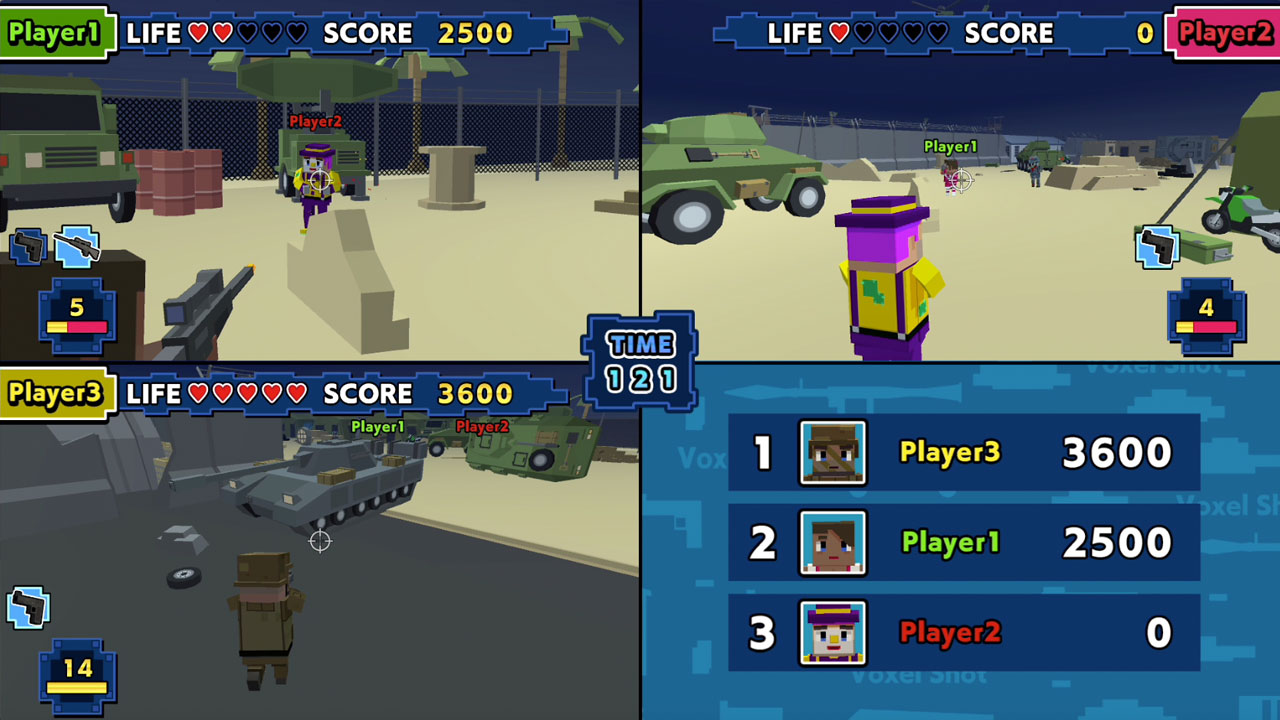 These tasks can come in a variety of forms, such as getting fifteen headshots, set numbers of multikills and losing no life, to name but a few. Although its presentation may come across as a simplistic game, its level completions aren’t always as forgiving at they may seem; a mechanic that isn’t necessarily down to difficulty challenge, but is also attributed to by some poor control executions. You see, Voxel Shot was originally released on the PC as a VR title and, while it may have worked in that setting, it’s transition to console hasn’t fared so well.

In order for a shooter to be successful, it’s shooting mechanics need to be smooth and concise. Unfortunately, this is a game that contains none of those elements. Aiming is particularly iffy, containing no smoothness or accuracy in the movement of its reticule. It creates a very unforgiving mechanic, one that requires you to move your character, rather than your aiming sight, in order to line shots up. The game’s enjoyment is also hampered by a very sluggish range of movement, often producing a motion that feels as if you were trudging through a thick gloop, rather than running for your life.

In order to try to bring a touch of variety to the game, Voxel Shot also contains a racing mode; one that is distinctly different from its zombie-survival mode, yet contains no bearing or connection to it either, apart from the odd zombie that walk across the track. This mode offers two race tracks, circuit and off-road. The difference between them being one is set on tarmac and the other involves racing around a dirt-track; as well as one being on motorbikes and the other within a set of buggies. Again, this mode tasks you fulfilling a set of requirements; usually not crashing into walls, finishing in a certain position or using a certain number of boosts. 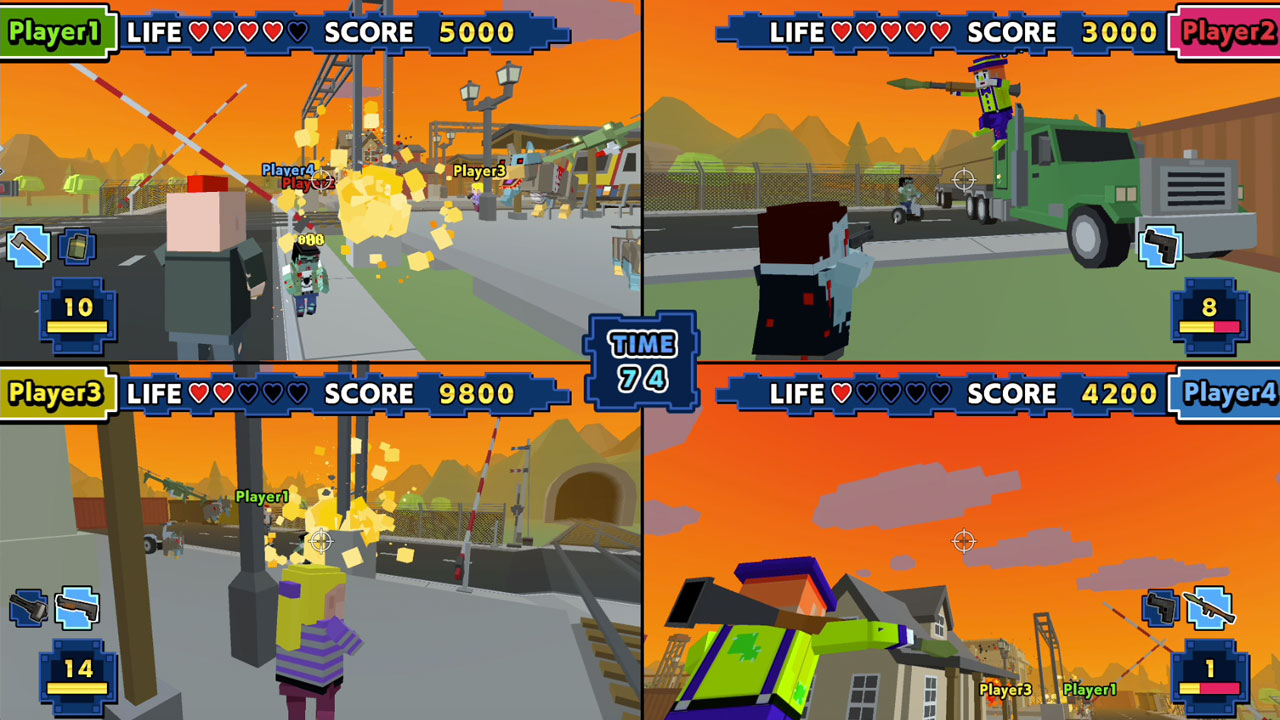 Similar to Mario Kart or any number of generic racers, a series of boost icons litter the tracks and picking them up awards you with a temporary increase of speed. However, in order to succeed in any of the races, it soon becomes apparent that you need these boosts in order to stay within a respectable position. Be warned though, as some of the icons can slow you down, according to their colour codings. Despite offering another variation of gameplay though, its execution still falls short of what is expected within a game of the racing genre. Handling is generally okay, but nothing here is particularly exciting, or enticing enough to make you want to play and it’s this over-riding element to the game that hampers its overall presentation.

If the game contains one saving grace, then it has to be its ability to cater for a local-multiplayer element for up to four players. Using both co-operative and competitive play, you and up to three friends can either work together to combat the zombie horde, play a deathmatch style of game against each other or compete on the racetracks. This inclusion of extra options and game variations do add a bit more to the title, often producing moments of fun, especially in its zombie-shooting and deathmatch modes, but it, ultimately, still doesn’t produce enough fun to make you want to return. Apart from a local leaderboard upon each level, or race, completion, there is nothing here to add depth to the title; producing a game that grows very stale, very quickly.

Overall, Voxel Shot is a game that simply falls flat in everything it tries to achieve. With no depth or reward system in place to entice you to keep playing, it’s very hard to justify a return once you’ve experienced everything it has to offer; unless you plan on playing with a group of friends or family, but even so, everything here is still very limited in what it can do. Along with some broken mechanics that hampers the gameplay, this is a difficult game to recommend. I can’t even say that this is an ideal game for children, as its content can raise questions of morality or contain elements that could possibly scare younger audiences. It may have worked in virtual reality, I don’t know, I haven’t checked, but here, on the Nintendo Switch, this is game that, unfortunately, falls a bit flat.