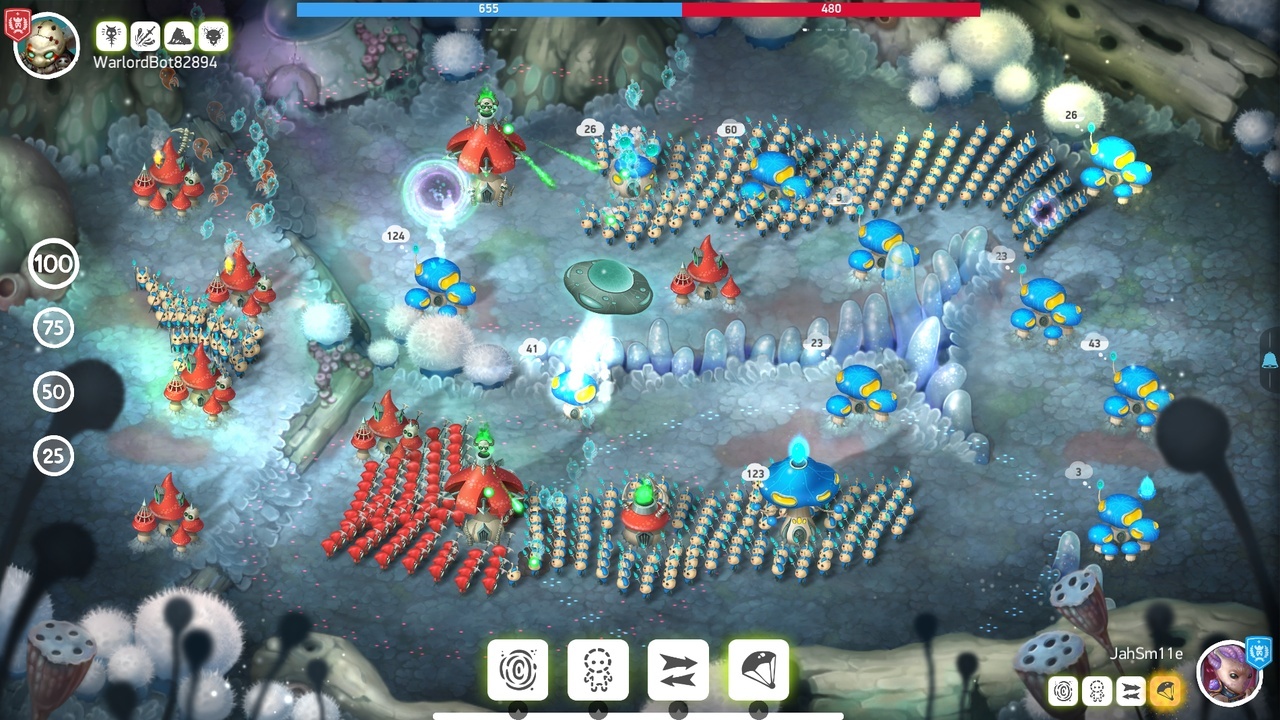 It has to be said, that if there’s one style of genre that is painfully thin on the ground upon the Nintendo Switch, then it has to be the games that cater for the real-time strategists. It can’t be argued that there is an abundance of the turn-based varieties, but the immediacy of seat-of-your-pants strategy just isn’t prevalent with console gaming. Well, all that is about to change, as Zillion Whales’ Mushroom Wars 2 grows a mould onto Nintendo’s newest gaming machine.

This award-winning title offers two story-driven campaigns, containing over one hundred levels, two hundred stars to collect, boss battles, four difficulty settings and a multiplayer element that boasts both local and online capabilities for up to four players; giving the game plenty of mushroom chomping action to get your teeth into. Although containing a story that revolves around heroism and bravery, as well as a spattering of honour and betrayals, there is no narrative here to push the story along. Instead, a series of animated hand-painted cut scenes give a sense of proceedings, yet never provide enough details as to what, where and why. However, this doesn’t detract too much from, what is ultimately, a good solid entry into a console-based real-time strategy game.

The main premise of the game involves a conquest style of play, by taking over a number of properties until the enemy units have been pushed out of the area. This is achieved by highlighting already-owned houses and, by using the R button, guiding its inhabitants into other buildings; some of which are neutral, whilst others are lived-in by the enemy types of fungi. The real-time elements of the gameplay, comes in the form of enemy units also building armies to take over the surrounding buildings. By selecting your units, a total of the units within the building determines the size of the force you can utilise. By sending these to other properties, you must then maintain a status quo in defending any buildings that you occupy, as well as take over new properties in order to achieve mission parameters. 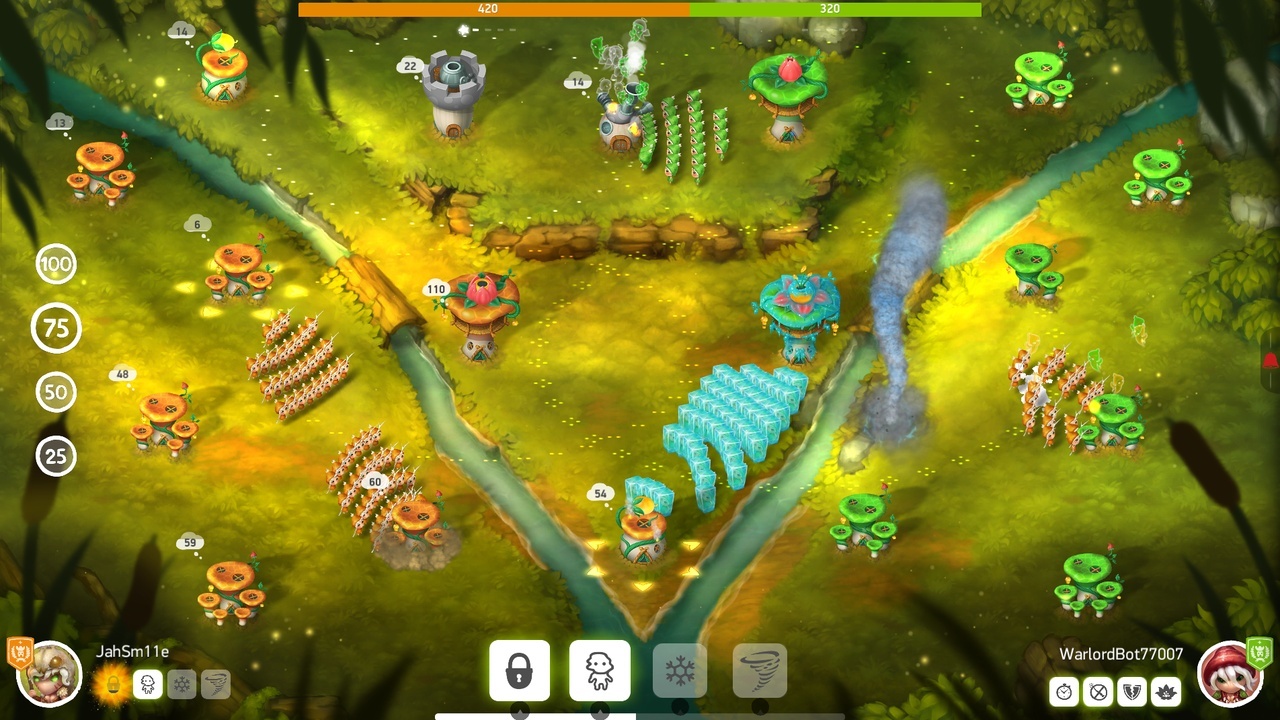 These can be upgraded by the use of the L button; boosting its output of available troops that you can muster. This then produces a fine balancing act over defence and offence, as you fight to maintain your number of troops to, not only counteract any enemy activity, but to take over their establishments in order to dwindle down the size of their force. The status of your battle is portrayed with the use of a coloured bar at the top of the screen, producing a tug-of-war style of display that shows who has the upper hand during the bite-sized skirmishes.

To add variety to the proceedings, there are a number of elements to help with the war effort. As well as the normal upgrade to occupied buildings, you can also develop forges, used to strengthen your squads, build forts which add a capability of ranged attacks and, as you progress, gain access to differing varieties of mushroom tribes and hero characters that offer varying forms of combat. Should any of your units, or occupied buildings, fall to a number that is under threat, then a cry of SOS will signal a need for help; creating an urgency that requires strategic skill and a need to multitask in order to regain the upper hand.

Skirmishes run at a brisk pace, often pitting you against overwhelming odds that forces you to find a balance in using your resources, maintaining a foothold in territory and timing your attacks to produce the most effective tactics. It’s all presented over a nice variety of aesthetically looking battlefields, with a mass of advancing mushrooms and tactical information. Everything is bright and colourful, with a hud that is easily distinguishable. However, it also has to be said that everything here produces a run-of-the-mill experience, with nothing overly-exciting and a graphical presentation that feels a bit flat, rather than creating an element of terrain factors. 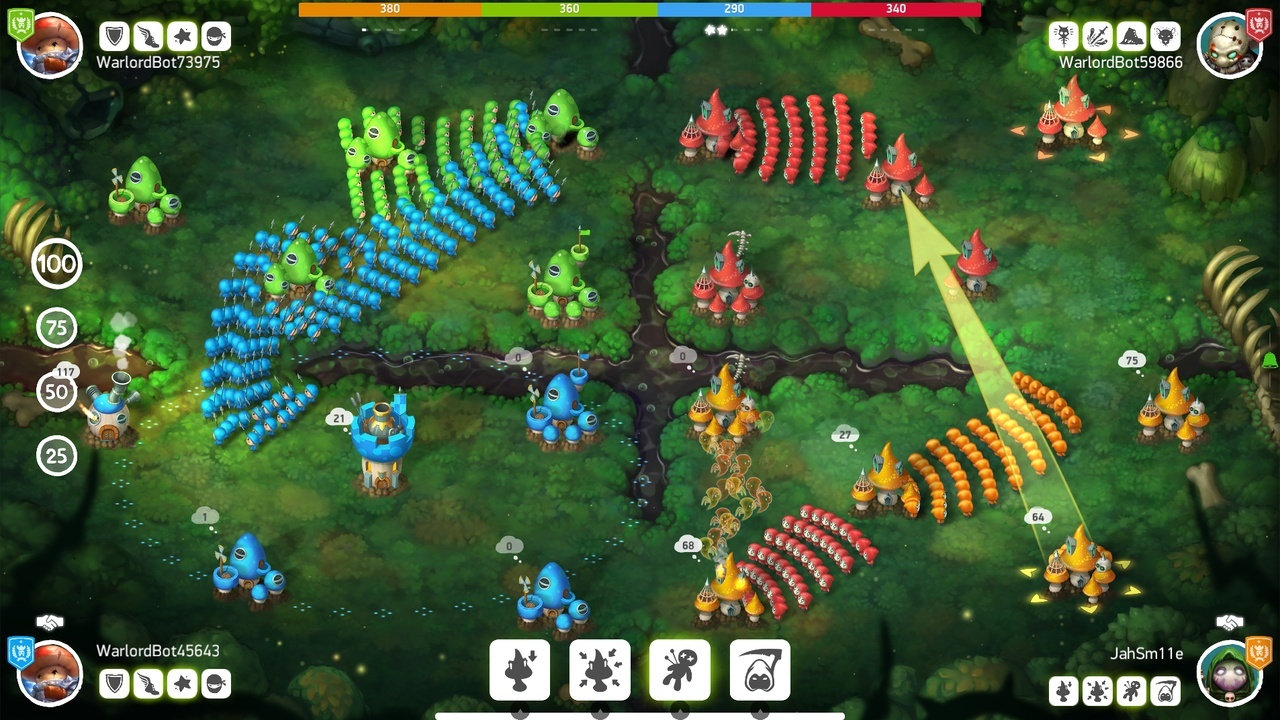 Each of the skirmishes are rarely overwhelming in their execution, with a majority of matches lasting for around ten to twenty minutes; depending on your level of skill and tactical decision making. Although the single-player campaigns do provide a form of entertainment, it can’t escape a feel of repetition with its mechanics. However, the game’s multiplayer capabilities produce an infinitely compelling setting with a wealth of options in which to play. Offering both local and online, its competitive nature utilises a ranked league system, as well as an option to spectate in order learn strategies and tactics.

With options for up to four players, ranging from free-for-all to two versus two co-operative battles, there is a wealth of gameplay here, with around fifty different maps and twelve different species of mushroom, as well as heroes that possess different qualities in movement and abilities; even alien varieties that can teleport around the battlefield and even render themselves invisible. It all adds to produce a gameplay mechanic that promotes experimentation and strategic thinking, especially against the infinitely more challenging prospect of human opponents.

Overall, Mushroom Wars 2 provides a satisfactory entry into the Nintendo Switch’s library for its missing element of real-time strategy titles. Although its single-player campaigns offer an accessible experience with a good level of depth, it does eventually lead to a staleness of repetition and a blandness in its run-of-the-mill mechanics. However, it is still an enjoyable experience overall. It’s real challenge lies in its multiplayer capacity though, producing an infinite scope in playabliity, as well as a range of options and game modes that will cater for any player. You can’t deny that this title contains a generous amount of content, with two campaigns, skirmishes, multiplayer, as well as a variation in fungi abilities. However, saying that, a distinct lack of variety in how the game plays can lead, over the long-term, to a game whose ingredients eventually grow cold and, ultimately, soon begins to feel a bit stale; especially for solo players.