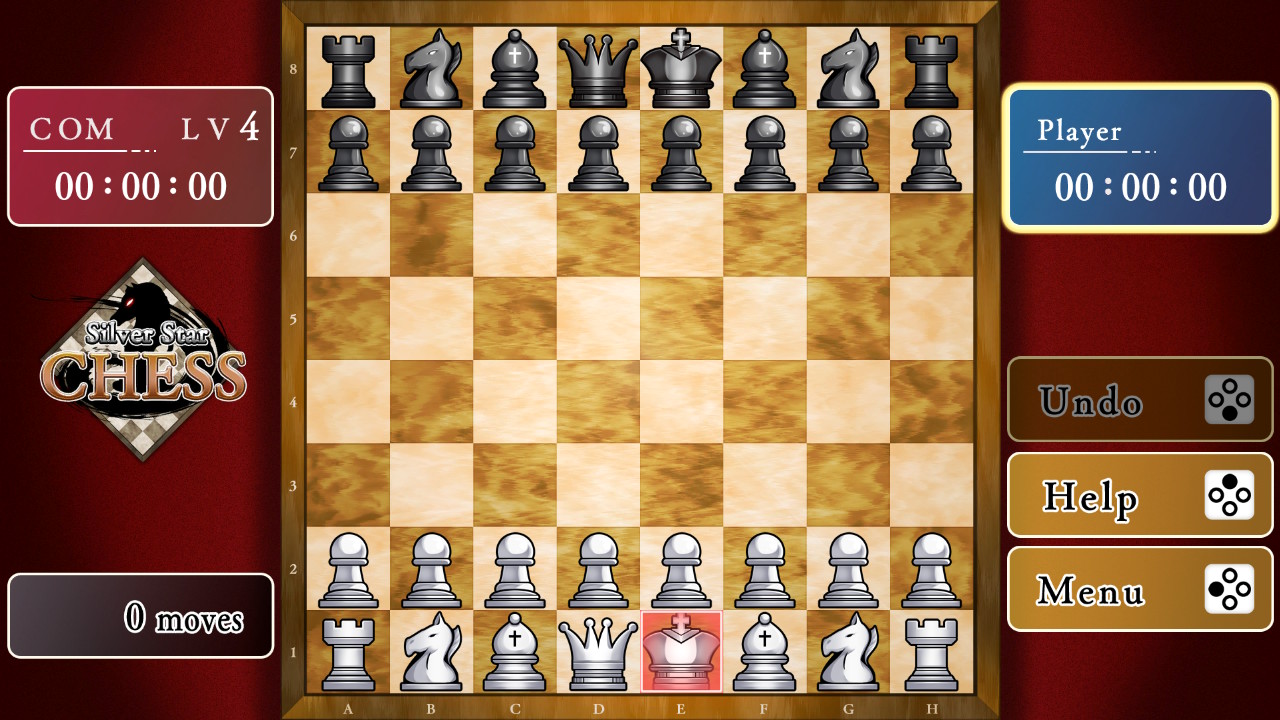 Like most people on the mobile planet, I own a smart phone. This thing is light years and massive leaps ahead of the one I originally got back in 2008, with a physical keyboard, weird nubbin mouse and like 2MB of memory. I have triple digits of gigabytes, a camera that would put my Sony from 2001 to shame, and a processor better than my laptop from college. And the most played game on it isn’t some gorgeous action shooter or a perfect port of a Playstation classic. It’s Spite and Malice, a card game that’s an emulation of Skip-Bo. I play this because I like to relax and do something that’s borderline mindless, but still an activity. Some people like to play simplified variations of their favorite games, because relaxing is an important part of mental health. So, for everyone else, there’s SilverStarChess.

This isn’t the first time that we’ve reviewed a chess game for the Nintendo Switch: many moons ago, Chess Ultra graced the pages of this publication, and it had a lot going for it. There were many variants of sets to use, different boards, really gorgeous graphics and some fantastically ambient music. As far as a chess game went, Chess Ultra was of the upper echelon of product: when you really, really enjoy chess and want to make a statement about it, either to yourself (Man, I frigging love chess!) or to other people (Man, he frigging loves chess!). 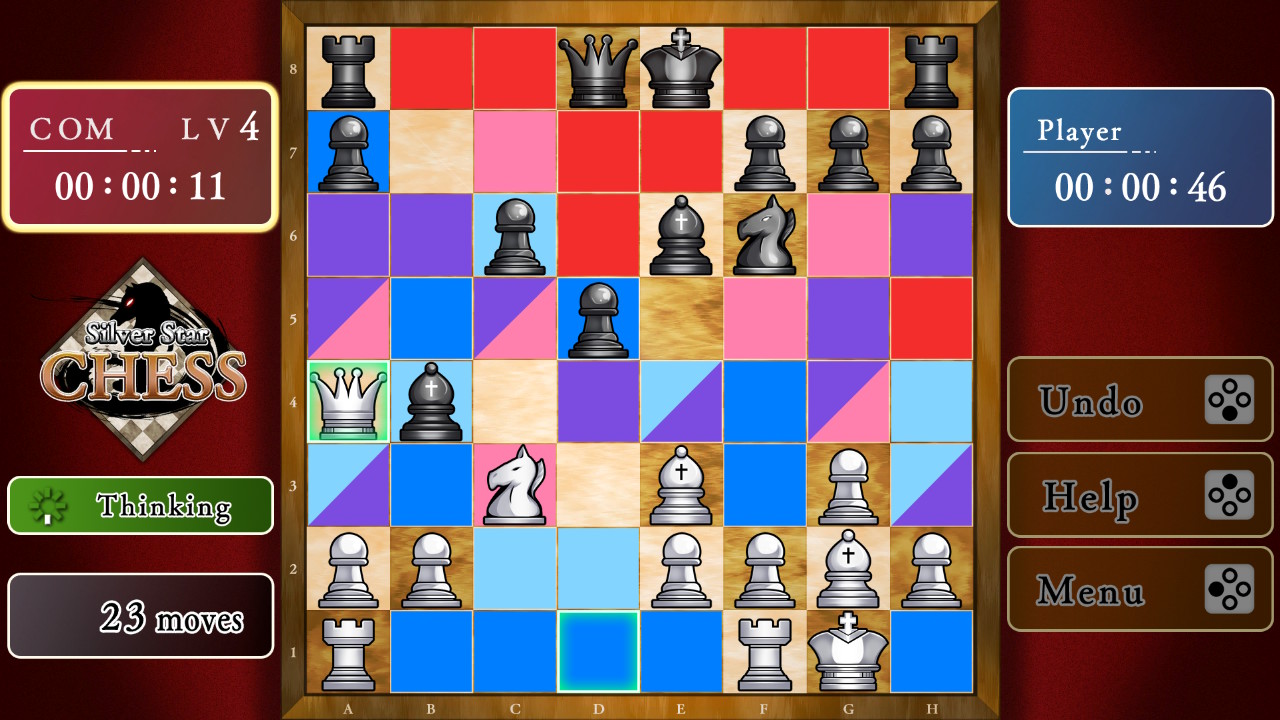 SilverStarChess is in a very, very different category. Firstly, there are no visual customizations that come with the game. There are black pieces, white pieces, a chess board and some jaunty, simple background tunes that really do nothing except remind you that you’re playing a game. There are various toggles that you can adjust, however: changing what color you start as (you daredevil, you), allowing or disallowing certain moves (referred to here as “official” moves, but really just means castling) and, naturally, adjusting the CPU difficulty in a solo match. The difficulty can scale all the way from a one up to a seven, with one being ideal for first timers or no timers, and seven for someone who’s looking for a very real challenge on the board. Despite having little to no real experience with chess, I did a couple swings on each difficulty setting to get the best feel for things.

If you have honestly never played chess before, SilverStarChess is ideal at level 1. It’s slow paced, accurately balanced and gives the player multiple holes to break through an incredibly weak defense and deliver short checkmates. If you’re secretly an 80s movie villain, level one is ideal for crushing opponents with Scholar’s Mate over and over again, or at least working out even more complex strategies that you wouldn’t be allowed to get away with in stronger games. For those of you who’ve invested a bit of time into the chess game that’s built into the office computer (because what else are you going to do while waiting for an email to arrive?), then start at level 2 or 3. There’s a big jump from 1 to 2, patching up a lot of obvious holes (no Fool’s Mate here) and giving the opponent an offensive streak. 3 is more of the same, but slightly more aggressive, which can honestly work in your favor if your strategy is more defensive.

Level 7 is pure, unmitigated agony for anyone who really doesn’t like chess. The CPU is cunning, patient, and a massive pain in the ass. Besides the fact that he plays like that one annoying kid in checkers who refuses to make the first jump, it felt like the augmented “thinking” time was even longer. I don’t fully understand why some games institute the thinking time, but SilverStarChess insists that your opponent is carefully deciding what to do next, even though you know that the Switch can probably pull from a set of moves relatively quickly. Or not, I really don’t know: I didn’t watch the Deep Blue vs. Kasparov games, I only read the results. In any case, please leave the higher level for when you want a long game, and you enjoy chess, and you’re not in any risk of hurling the Switch, because it’s a lot more tedious to replace than a new Samsung. 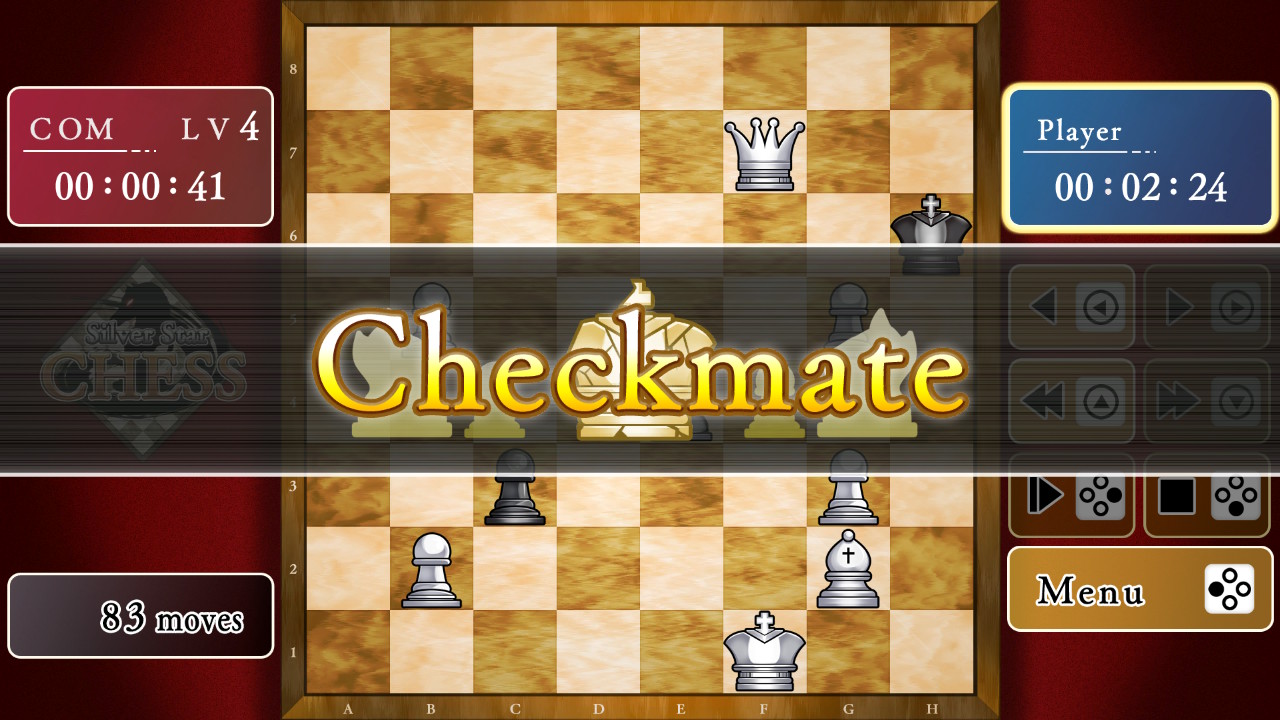 And yes, SilverStarChess does have multiplayer, which is local and JoyCon or touch screen controlled. The controls port well to JoyCon, so there shouldn’t be a problem wrangling a quick game against a coworker or friend on a lunch break or between classes. The touch screen controls are my personal favorite, but I can understand having a more tactile experience for when you’re playing against another person. And the simplified graphics look good enough on the Switch’s portable display to make a game feasible and more than doable from start to finish without needing to dock.

All in all, SilverStarChess is an unapologetic, clean and simple chess game. This isn’t some massive, luxury title with achievements, branded tie-ins or any other number of ridiculous bells and whistles. It’s chess, straight up, and you should know exactly what you’re getting. At less than ten bucks, the purpose of this game is to give those who like chess a version that they can carry on their Switch, has a small install size, and gets the job done. Fast loads, faster multiplayer games, and a fairly paced solo experience. Even though I’m not blown away by the title overall, it’s functional, and sometimes that’s all you need for a digital version of a board game.