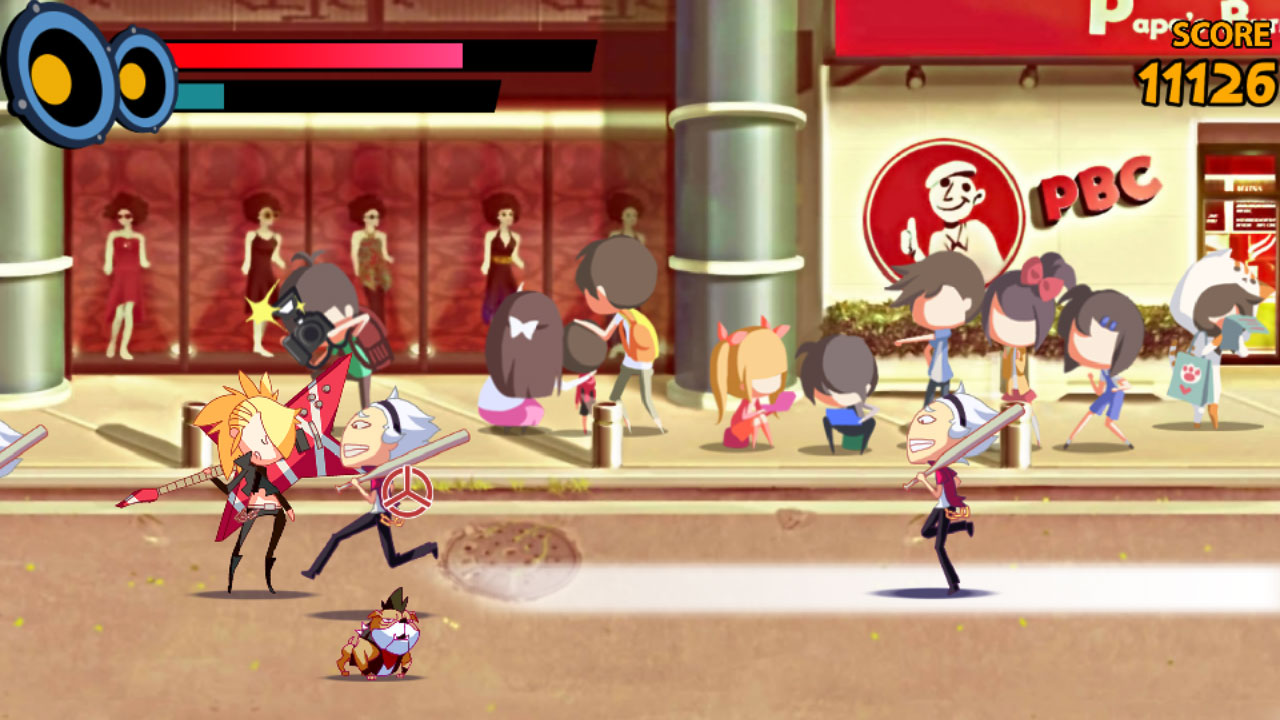 It doesn’t make sense why we walk around every day pretending like hammers don’t solve every single problem. Loose nail? Hammer it down. Tiles fitting irregularly? Hit them till they fit. Abundance of terrible gophers in your backyard? Hammer time. Employees trying to ask for a raise when they can’t do the goddamn job you assigned them six hours ago? Threaten them with a hammer! Cops showing up because of hammer threats? That hammer is your ticket to never having to work in modern society again! Yes, hammers solve everything, including the pains and questions of music and rhythm. Thankfully, one developer really gets it, and FK Digital, with the help of Arc System Works, wants to remind everyone of the power of the hammer. This, RADIO HAMMER STATION was born, and the world is better for it.

RADIO HAMMER STATION is the tale of the best goddamn radio station in the world, bringing a wide variety of grooves and mixes of all genres to the people at large. However, a good radio station knows that they aren’t just dropping funky beats: sometimes they need to protect and save the people for whom they play. Whether it’s beating back a sudden surge of flashers in the neighborhood, fighting back against an alien invasion or taking care of zombies, sometimes music and violence need to work together in harmony to make things a tad better. The DJs rarely go anywhere without their handlers, who add a level of insight, humor and exposition to every leg of their journey. From the lovely Julie Ann to the mysterious DJ Numi, all the radio personalities have their own fanbase, loyalties, and unique musical branding. And, with close to one hundred tracks in the game, it’s no surprise that RADIO HAMMER STATION is such a fantastic musical experience. 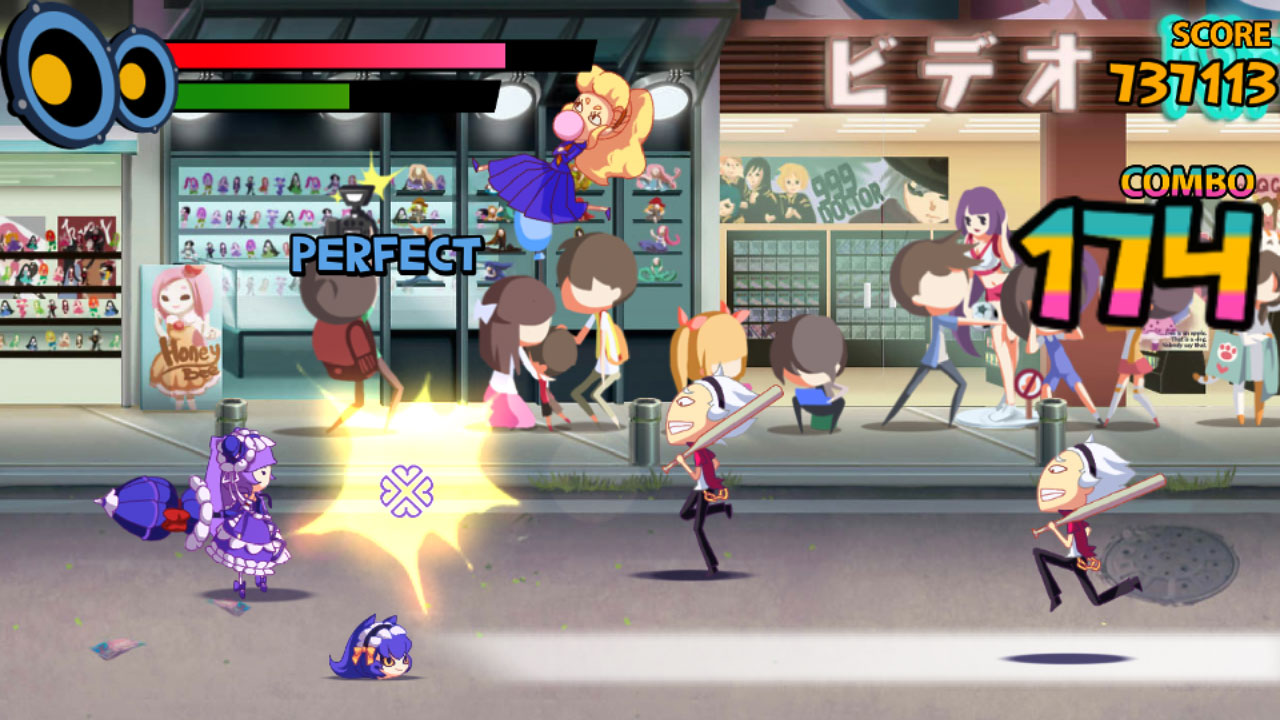 The main gameplay of each level is, theoretically, simple: things run at you, and you have to hit them with your hammer/guitar/parasol/boom box. These things, be they the undead or perverts, will come at you in one of two lanes. Hit the appropriate button right as they get locked in the beat to maximize your points and achieve perfect for the strike. Naturally, they’ll come at you at a good speed at first and, gradually, start to rush you with incredible moments of triplets, offbeats, staggered beats and all around musically mathematical mayhem. Additionally, as you play, presents will pop up on occasion, things that can help you out in terms of restoring HP (if an errant mob gets through) or charging up your beat meter. You gotta grab the presents before they disappear with a separate button, but be careful: sometimes they’re trick presents that’ll do damage to you and ruin your concentration. Hit enough baddies in a row to trigger a wonderful beat euphoria that changes the background to fit your character more appropriately (MC Wayne has the best damn background) and also get higher points per strike.

For longtime rhythm players, the concept of only two and a half buttons might seem exceptionally easy, but RADIO HAMMER STATION doesn’t take it easy on you by any stretch of the imagination. It’s easy to see certain elements and think this’ll be a cakewalk: short songs (the first few are less than a minute), short button combinations and simple enough controls. However, the difficulty quickly stacks against you in a variety of ways. Firstly, chain songs. There’s nothing like thinking you’re done with a level only for there to be one, two or three more songs still to do, with different remixes and rhythms from the previous song, sometimes changing genres entirely. Additionally, when you finally get to the boss fights that show up a few times per character, these will require a totally different level of focus, since the objects that you’ll be striking will move and appear significantly different from the previous ones. Julie, for example, has to deflect a series of missiles fired at her by, well, robotic versions of herself, and these bloated targets feel on a completely different level compared to the perverts she’s been striking down in the meantime. These boss fights are meant to not only give some conclusive story arc to each of the DJS, but keep you on your toes.

Additionally, if you think the concept of the game is getting too easy, there’s several routes you can take to make it more exciting. Firstly, making sure you get all the stars for a given level. These might seem like hilariously simple tasks, like “get 20 greats,” but you have no idea the pain and agony of the dual “get all presents/get NO trick presents” missions. You’re putting all your focus into taking out the never-ending wave of actual notes that have become sentient and are cracking down on you. Suddenly, a box appears out of your periphery. Is it green or red? You only have a second to react, and failing to grab it could cost you the star, but GRABBING it could also ruin your life. And then, in the time you’ve been trying to act, the present is gone and now two notes are up your damn nose. These missions are no joke. And, after beating a song once, you can always swap to “Another Mode,” which lets the mobs bear down on you with little to no warning, forcing actual, split-second reactions akin to other rhythm games that you might be more used to. This feels like the hardest mini game of Rhythm Heaven on acid, and that’s what it boils down to, in the end. 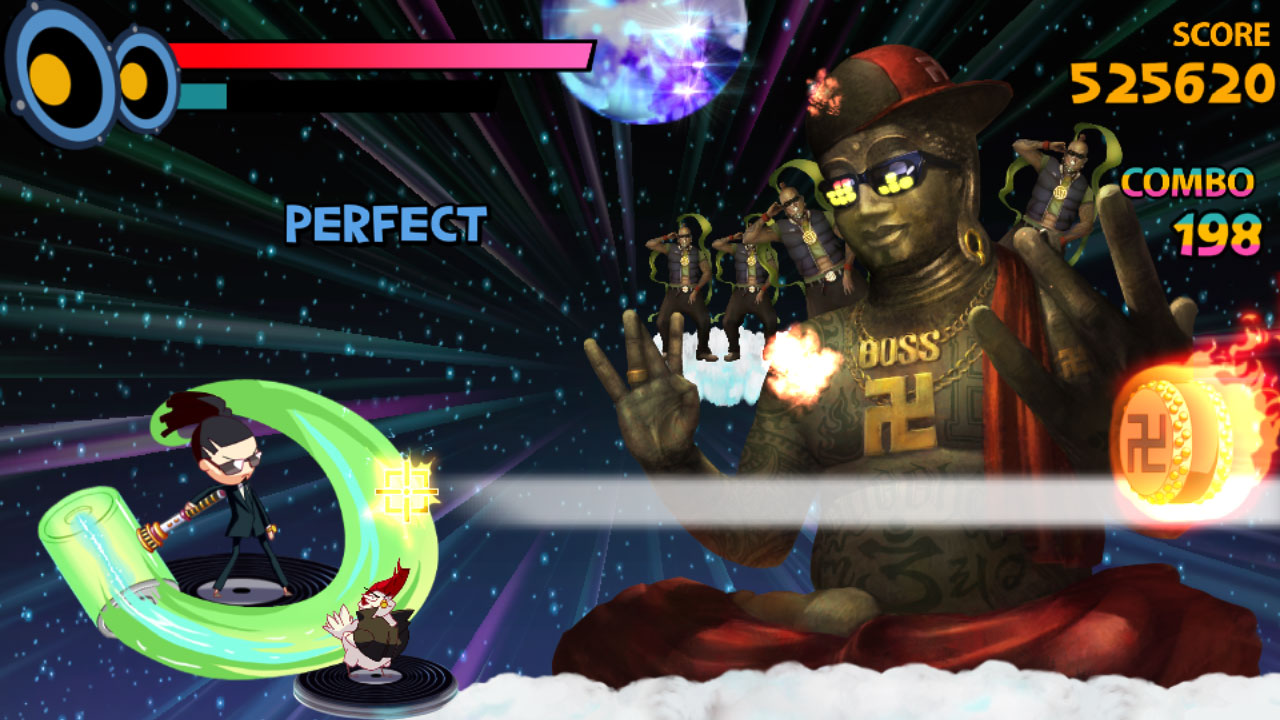 The absolute best part about RADIO HAMMER STATION is the pick-up-and-play feeling of the whole ordeal. No matter what set of missions you’re going through, it’s a great, personal struggle to do a single level and call it a day or to buffalo through an entire episode because is the game ever addictive. The musical variance of beats, especially when it comes to the other DJs, is fantastic, and, though I didn’t care for her approach (who swings a guitar when hammers exist??), the set list for Simply Lita is probably my favorite from start to finish. With everything driven by cute characters, sharp colors and good latency, having the music be a great element is the icing on the cake to make this title incredibly enjoyable from start to finish.

I suppose that’s the only downside to RADIO HAMMER STATION is how fleeting it is. Sticking to just the main missions and powering through all five characters, you can probably go front to back in under two hours, possibly under an hour. But the replay possibilities are there, and I did love re-running other tracks using hammers from other DJS and hammers that I found. Again, to have a rhythm game be fun and not just a musical chore is a wonderful sensation, and something that I value when it comes to games that I want to continue playing in my free time. And the price point is a serious value, in my eyes: I would have easily paid ten for this much content, especially coming from Arc System Works. For seven bucks, it’s a no brainer: grab a hammer and start pounding out the beats.