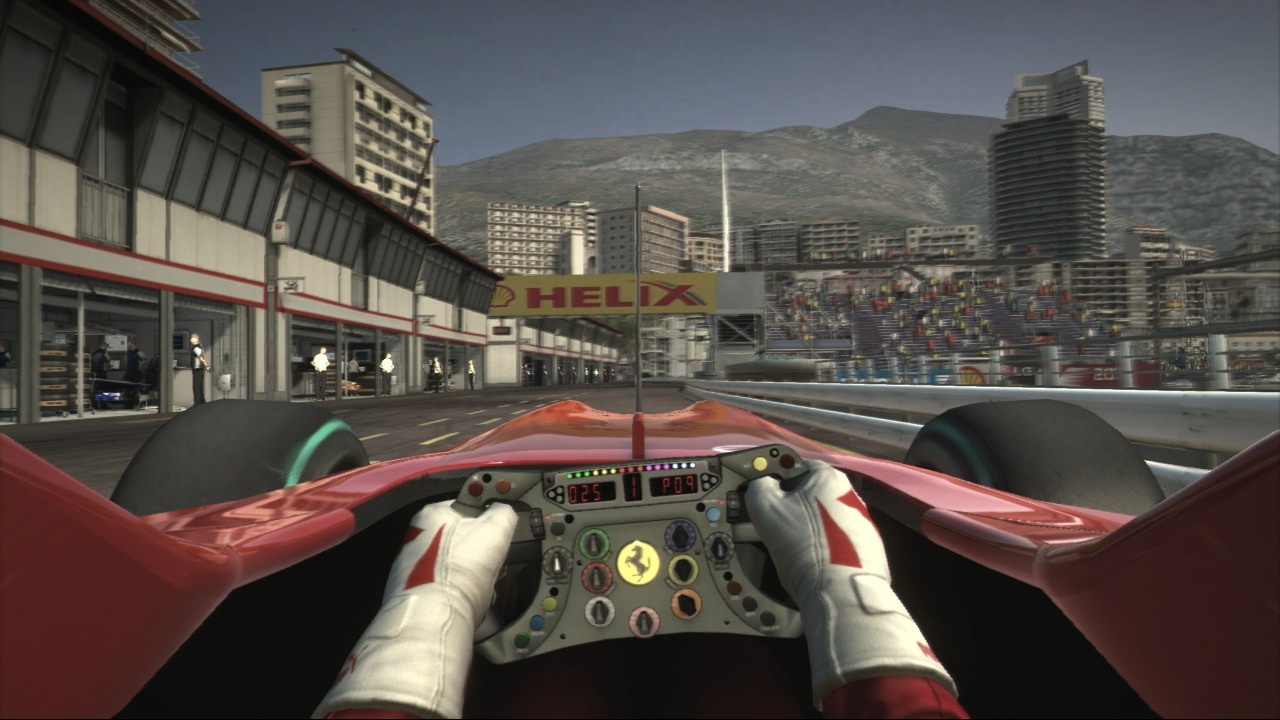 For such an inherently exciting, downright glamorous sport, it’s amazing how recent videogame interpretations of Formula 1 racing have been so, well, boring. In the years that Sony held the F1 license, the games they produced, while technically sound, largely failed to capture the thrill, atmosphere and speed of F1 racing.

Racing around Monza at speeds in excess of 210mph should be thrilling, edge of your seat stuff. With such a small margin for error, each corner should feel like you’re pushing both yourself and the car to the very limit. This just hasn’t been the case….until now. Codemasters, the company behind racing heavyweights Dirt 2 and GRID have delivered an eye-searingly fast interpretation of the sport, delivering an experience that feels much more akin to tearing around a track with 23 other racers in the fastest, most technically advanced motor vehicles the world has ever seen.

Of course, as fast and potentially exciting as driving your virtual F1 car around Monaco is, a major problem this sub-genre has always faced is its notoriously steep learning curve. While the limited margin for error, attention to detail and edge of your seat excitement is what makes an F1 game potentially great, it’s also what has historically made them somewhat niche in their appeal. Luckily, Codemasters, the kings of approachable simulations have delivered a learning curve as gentle or steep as you want it to be.

With a myriad of options that can be changed on the fly, ranging from genre basics such as an optional racing line and assisted breaking through to the more sport specific options such as fuel simulation and tyre wear options, F1 2010 can deliver both immediate, entry level gameplay or an unforgiving, in-depth replication of the sport. Some will inevitably argue that the option to tone down the difficulty will destroy F1 2010’s simulation sensibilities, but honestly, if you choose to turn off all the assists, F1 2010 is as unforgiving a racing experience as you’re likely to find. And anyway, when a games fundamental mechanics are as advanced or rudimentary as you want them to be, what’s the problem? There are leaderboards based on specific settings and you’ll always be able to find online races suited to your tastes. By giving the gamer the choice, F1 2010 has enough under its bonnet to keep the hardcore happy while providing an immediately more accessible experience for those new to the sport.

Believe me, starting the game with the option to tone down the difficulty will be greatly appreciated by those who haven’t played an F1 game before – especially given the fact that F1 2010 is, somewhat surprisingly, completely devoid of tutorials. The option to remove these crutches one at a time also provides a surprising sense of achievement as you knock one assist off after another as you gradually get to grips with the unforgiving vehicles, consistently demanding tracks and finer points of the sport itself. To help even the most advanced gamers along, the re-wind system found in Dirt 2 and GRID has made the move over to F1 2010 and before any of the hardcore start to moan, yes, it can be turned off and yes, regardless of your skill level, it will come in handy. 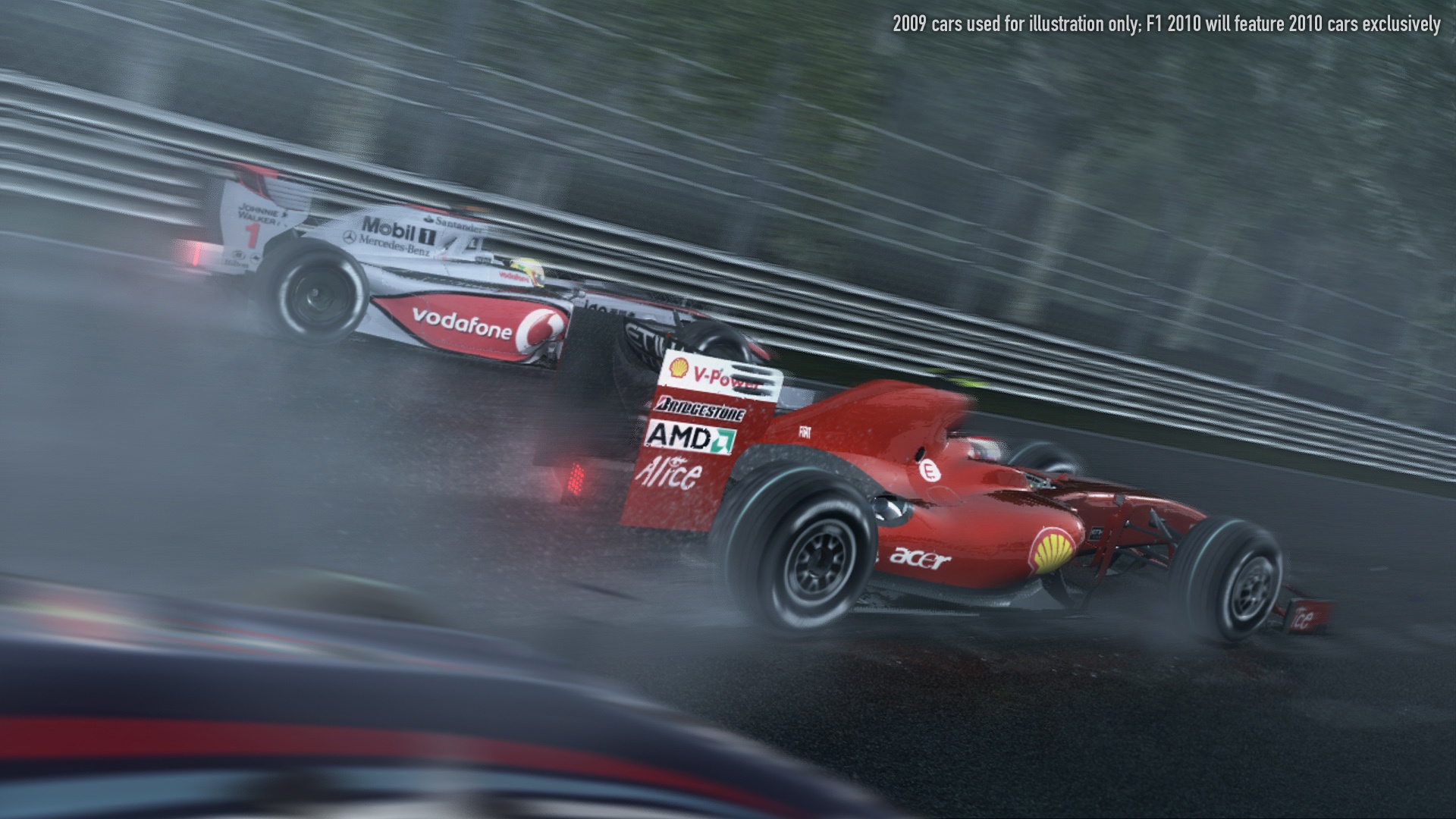 Once you finally reach the point in which all assists are off and it’s just you and the car, well, that’s when F1 2010 really starts to shine. Few games can provide as much excitement with just a track and a timer as F1 2010. When played the way it was intended to be played, simply racing against the clock, attempting to master just one of the games 19 tracks can eat up hours upon hours of your time – it truly is unbelievable just how addictive making that next step up the leaderboards can become.

Of course, things get a bit more complicated when you add 23 other racers and arguably the most advanced weather system ever developed for a videogame into the mix. Things as simple as ambient temperature have a clear effect on races with cars providing unique feedback and performance based on rising and lowering temperatures. Of course, the real fun starts when the heavens open up – as the rain starts to fall, you will notice how traction diminishes dramatically, decreasing as the track gets wetter. As the race goes on, you’ll visibly see the racing line dry as the cars in front push the standing water into the air. The weather conditions not only affect the way you drive, they also deliver some of the games most visually spectacular moments; driving from the cockpit view as water sprays onto your visor with the rear light of the car in front the only visual indicator of where you should be going next proves both exhilarating and visually dazzling.

That’s not to say the rest of the game isn’t visually up to scratch of course. Amidst a genre which prides itself on delivering some of the technically finest visuals that the medium has to offer, F1 2010, powered by the ever impressive EGO engine, stands shoulder to shoulder with the big boys. With teams, cars, racers and tracks all taken from the current season, it’s amazing to see how much work has gone into recreating the finest details of every aspect of the sport. All 12 cars look fabulous, the tracks are all recreated with pin point accuracy and the hustle and bustle before and after a race is all delivered in a convincingly authentic manner. The damage model isn’t quite in the same league as Codemasters other big racers but it’s still a step ahead of the majority of the competition and does a solid job of portraying the brutality and impact of crashes at such electrifying speeds.

Sadly, as great as it all looks, the game is lacking when it comes to delivering accurate information as you race, and for serious fans of the sport, the complete lack of a safety cars and telemetry information will come as a major disappointment. One of the biggest problems you’ll come across is that the time needed to advance in qualifying sessions simply isn’t made clear. Not only does this lack of clear information make judging how hard you need to push all but impossible but it also takes a lot of the tension and excitement out of this pre-race event – qualifying is all about the comparison of section times and lap times in comparison to the racers who have gone before – without that information being delivered in a clear and timely fashion, qualifiers simply aren’t as exciting as they could have been.

A similar problem arises in the actual races themselves. While the position of other racers is highlighted by their lap times, the fact that their full race times are not specified makes knowing your position in comparison to the other cars on track very difficult to judge. These might seem like somewhat minor issues to many, but considering that success in F1 is so intrinsically linked to in-depth, accurate information, these oversights will prove especially disappointing to serious fans of the sport. 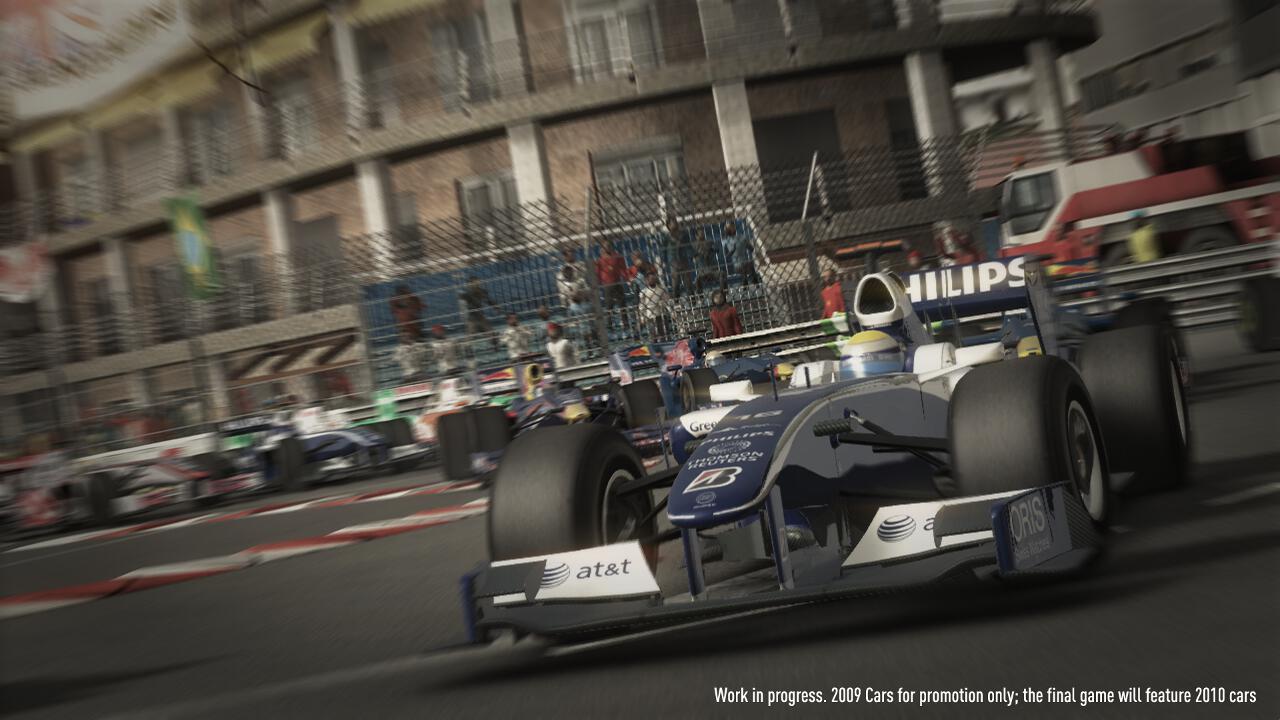 The other major disappointment stems for the fact that the Career Mode never manages to deliver on Codemasters initial promises of a full F1 experience. While certainly fun enough, with an epic three, five or seven seasons to play through and all the first class presentation we have come to expect from a Codemasters racer, the pledge to deliver a career that would let you live the life of an F1 star sadly never quite materialises. There are moments that hint at what they were trying to achieve, but too much of it feels superficial and ultimately pointless – there are questions to be answered at after race press conferences and journalist often waiting outside your trailer apparently eager for an interview – the problem is, the questions often feel samey and the choice of responses are usually hackneyed and dull. With so much bickering and infighting between today’s F1 racers, you can’t help but feel let down by the lack of more noteworthy response options – Mass Effect this a’int.

Still, what really matters is the racing, and in that respect F1 2010 does not disappoint. Unlike the natural, instinct based slides and drifts of Dirt 2, success in F1 2010 comes to an almost machine like knowledge of the racing line and breaking point. While turning rarely proves a problem thanks to each vehicles epic levels of downforce, judging the apex of a corner and choosing the correct time to bang on the breaks will nearly always mean the difference between a smooth exit or a Kobayashi-like trip to the gravel trap.

It’s not just the brakes you have to keep an eye on either – F1 2010’s meticulous tracks include every bump, kerb and imperfection you would expect to find on the real thing. Hit a bump with too much speed and you’re going to lose control and speed, catch a kerb and you’ll quickly find yourself facing the wrong way. Add to that a need to keep an eye on your tyres, your fuel consumption and the enforced 1 pit stop minimum to take into account and you’ll have a hell of a lot to contend with when out on the track. While fun with the assists enabled, full commitment to F1 2010 and its simulation sensibilities is richly rewarded.

As a first attempt at the world of F1, Codemasters have done an incredible job. There are a few issues that keep F1 2010 from joining the elite racers of this generation, but with another year in the shop and some tinkering under the bonnet, F1 2011 could well find itself on the podium next season.