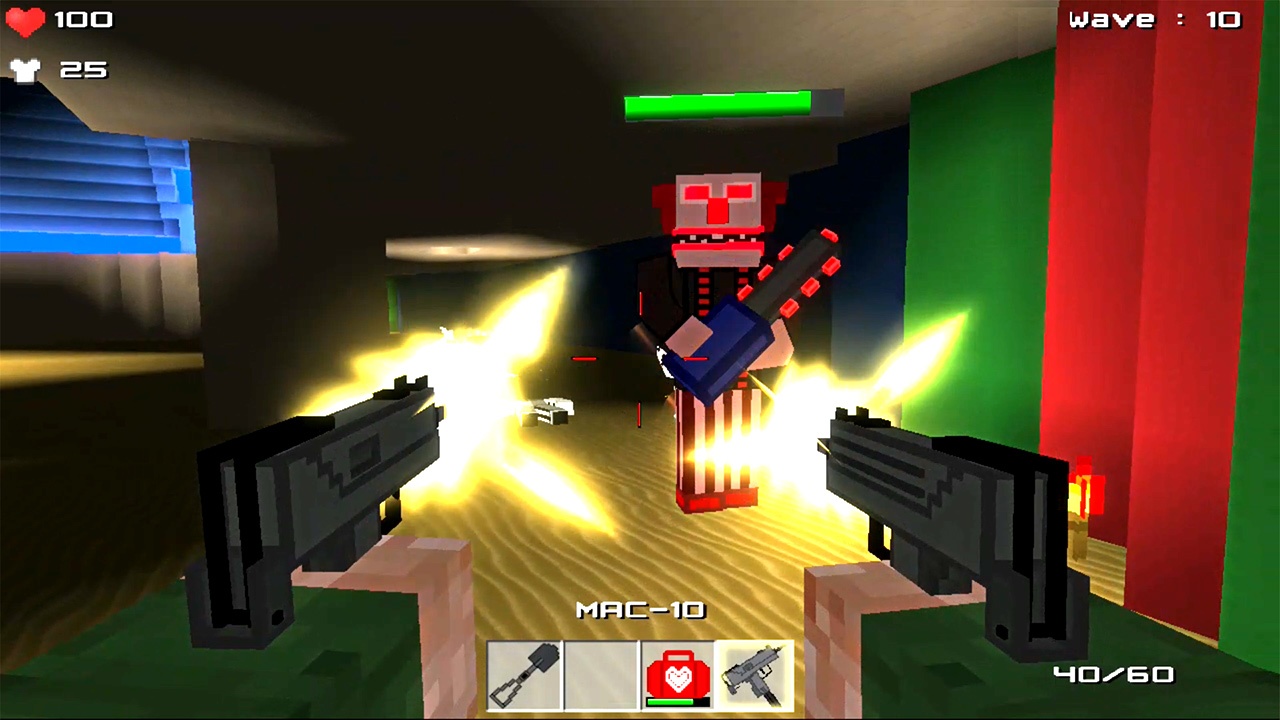 From my experience, especially where my children are involved, being creative within a game like Mojang’s Minecraft can be a good thing. However, it soon leads to fights and arguments when my youngest comes along and starts smashing everything up. So, what could be better than a game where you are given the creative freedom to build and then the green light to destroy everything and kill everyone in sight. That’s exactly what Cypronia’s Pixel Action Heroes is about; building your own custom levels and then inviting your friends, or strangers even, in to wreak havoc all over the place.

The first thing that will strike you when you load this title up is a similarity in its graphical presentation to Mojang’s classic. It uses the same model of block-building to create its aesthetical look, both in level designs and character presentations. However, where this title differs, is its main premise of being a first-person shooter; pitting you against a series of bots or online players within a series of arenas as you battle it out in a series of competitive modes such as free-for-all and team deathmatch. That’s not the only thing either, as the roster of playable characters are based on action movie heroes with parodies that range from Scarface’s Al Pacino (Al Cappucino) to Star Wars’ Princess Leia Organa (or Leia Oregano), bringing some nice touches of humour to the game.

So, there you have it, a mish-mash of a Minecraft-style of creativity and presentation with a first-person shooting mechanic. But does it pull off this amalgamation of gameplay and genre to a successful level? In order to ascertain it’s success, we need look at each individual component and how they work as a separate entity. First off, is the presentation and building mechanics of its block-building roots. One thing that I can say, is that this is a game that contains a wealth of depth with a level editor and the option to create your own character skins. This opens up the game to a whole host of customisations, creating levels that can be based on your favourite films, locations that may be personal to you and your friends or whatever your imagination can conjure up. The same can also be applied to character creations with putting yourself in the game, or modelling a skin on a favourite hero of yours. 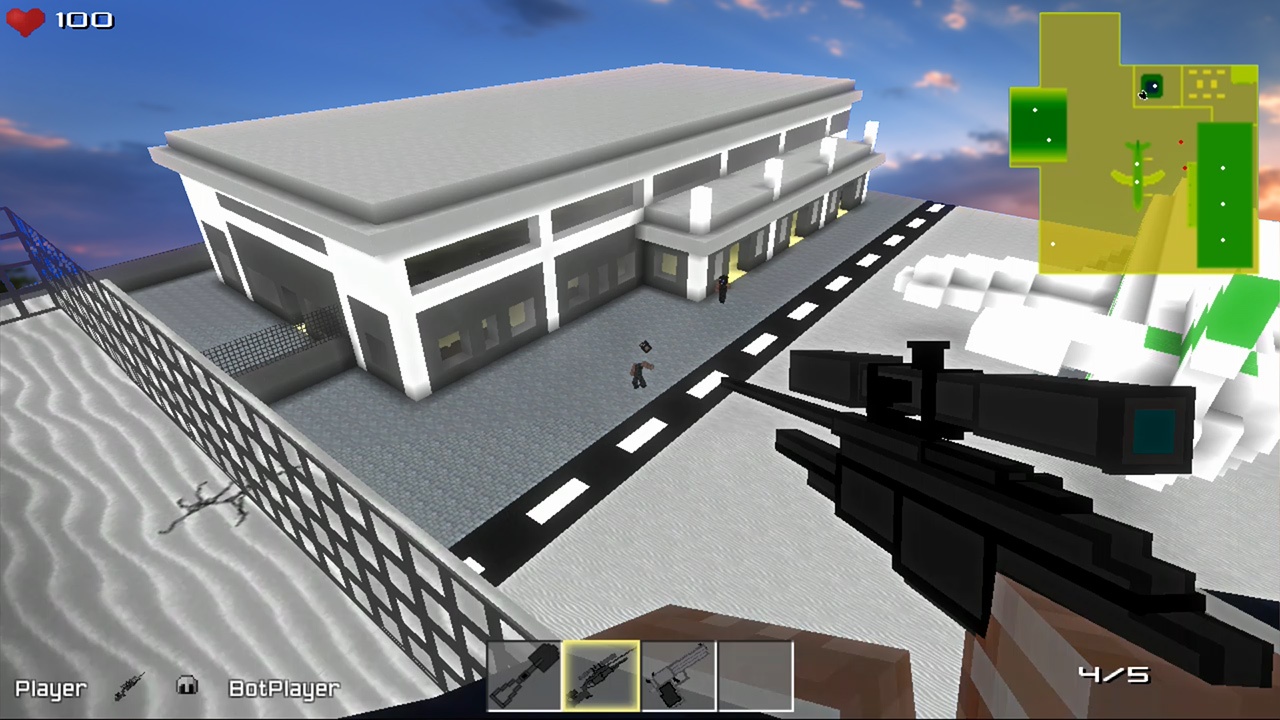 There’s a lot here to get your creative juices flowing, with easy-to-use menus and tools, plus a wealth of options. However, it doesn’t contain the same level of depth as Mojang’s title, with a limited selection of building blocks available to you, as well as a restricted area upon where you can build. Saying that though, there is a lot of fun that can be had with building levels and characters, adding a level of personalisation to your experience. If you’ve played Mojang’s title, then the building mechanics here will be instantly familiar to you, with the shoulder buttons placing and removing blocks and grid-like menus displaying the building bricks that are available to you.

Next, we come to the shooting mechanics and gameplay options within each of its modes. Single players have a selection of creative, practice and zombie modes. Creative is as it implies, whilst practice and zombies provide a series of arena battles against the CPU. Practice plays in a similar fashion to free-for-all across a series of maps, whilst zombie pits you against waves of the undead as you fight for survival. Dotted around the maps, a variety of weapons can be picked up, to a maximum of four, as well as your trusty spade to alter the environment. Firing is performed with ZR and weapon selection is controlled with wither Y or A. You can also jump with L and reload with R, with the thumbsticks controlling movement and camera viewpoints.

Despite a wealth of depth and a few game modes, the single-player offering here feels a bit flat; although its zombie mode can provide some fun for a while. However, its multiplayer offerings provide a more substantial experience; although there’s no option here for local play. From a lobby you can select from a series of player rooms that caters for up to six players, or you can create your own game, choosing from deathmatch and team deathmatch, or if you’re so inclined, you can even choose to play a 1v1 soccer match using a zombies head as a ball! At the time of writing this review, the servers were always populated with no shortage of games to play. 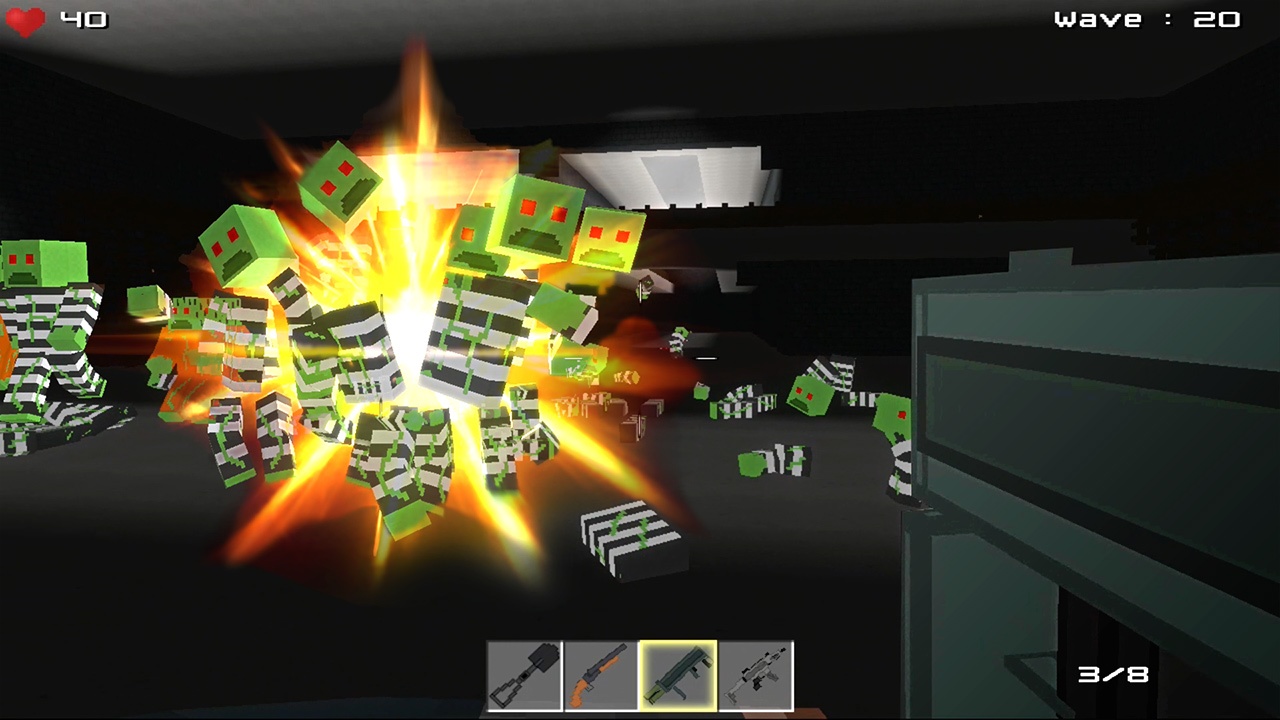 Despite containing a better offering of gameplay values than its single-player offering, there’s nothing here that is particularly exciting or rewarding. Everything here is pretty much run-of-the mill or just basic in its execution; whether it be the games building or shooting mechanics. I can’t deny that there is some fun to be had with this title, it’s just limited in the amount it can be offering. Gunplay feels weak, despite containing a variety of weaponry from pistols to rocket launchers. However, everything does run smooth and fluidly, running at a consistent frame rate of 30fps. Gyro support is also supported here, with the aiming mechanics of your weapons being controlled through the physical movement of your Switch. It’s mechanics worked well, allowing for a smoother experience and pin-point accuracy, although I’m not a particular fan of this method of control; especially if I’m sitting on the train or another form of public transport.

Overall, Pixel Action Heroes isn’t a bad little game, but it’s not particularly good either. However, what it does contain is a lot of humour; there’s something rather alluring in playing as your favourite movie-star or action hero. Each of them are fully voiced, coming out with quips that suit their personalities; although repetition does come into play here with their mechanic of constantly repeating themselves after every kill. Its saving grace comes in the form of depth that it contains though, particularly within its creative element. Saying that though, if you’re looking for a similar depth to the editing within Minecraft, then you’ll be disappointed as this game only presents a basic variety in its tool-work, but is still, nonetheless, a mechanic that works well enough. Creating skins is also great and well done here, but ultimately, the FPS elements of the game do fall a bit flat. For a fun casual experience, or even just for laughs, then this is most definitely a title worth checking out; especially with its pocket-money pricing. However, if you’re looking for a series of mini-games set within the block-based world, then you’re simply better off with the offerings from its bigger and more successful brethren.