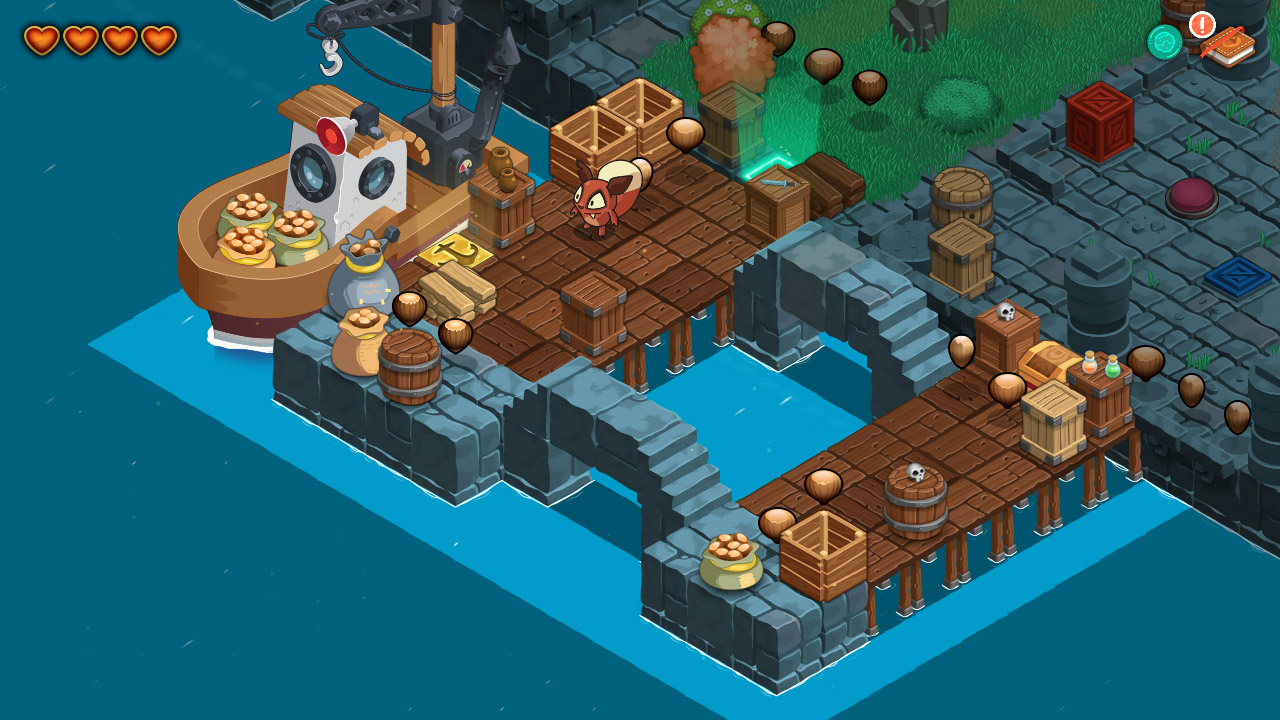 In Red’s Kingdom, you play as the titular Red, a squirrel who lives in a kingdom oppressed by a tyrant king. One faithful day, the king raids your home and takes, not only your winter store of food, but also your dear father. It’s up to you to reclaim the two most important things in your life by solving puzzles, fighting the king’s men, and exploring a variety of locations in a sprawling kingdom.

Red’s Kingdom is an RPG in the style of classic games like Legend of Zelda. I make the parallel only because, similar to the earlier games, you’re given locations to visit in order to claim objects so that you can proceed. You’re able to visit in any order you wish, though you’ll need to unlock different abilities via equipment to access blocked off areas.

The world is divided into “rooms” that are set up like a sliding tile puzzle where the tile is Red himself. Red will continue in whatever direction you roll him and will only stop when he meets an obstacle. In order to travel to the next room, you need to make your way to the exit by navigating through these puzzles. It’s a brilliant twist on the RPG genre, seamlessly adding puzzles as the main component rather than as a mini-game on the side. 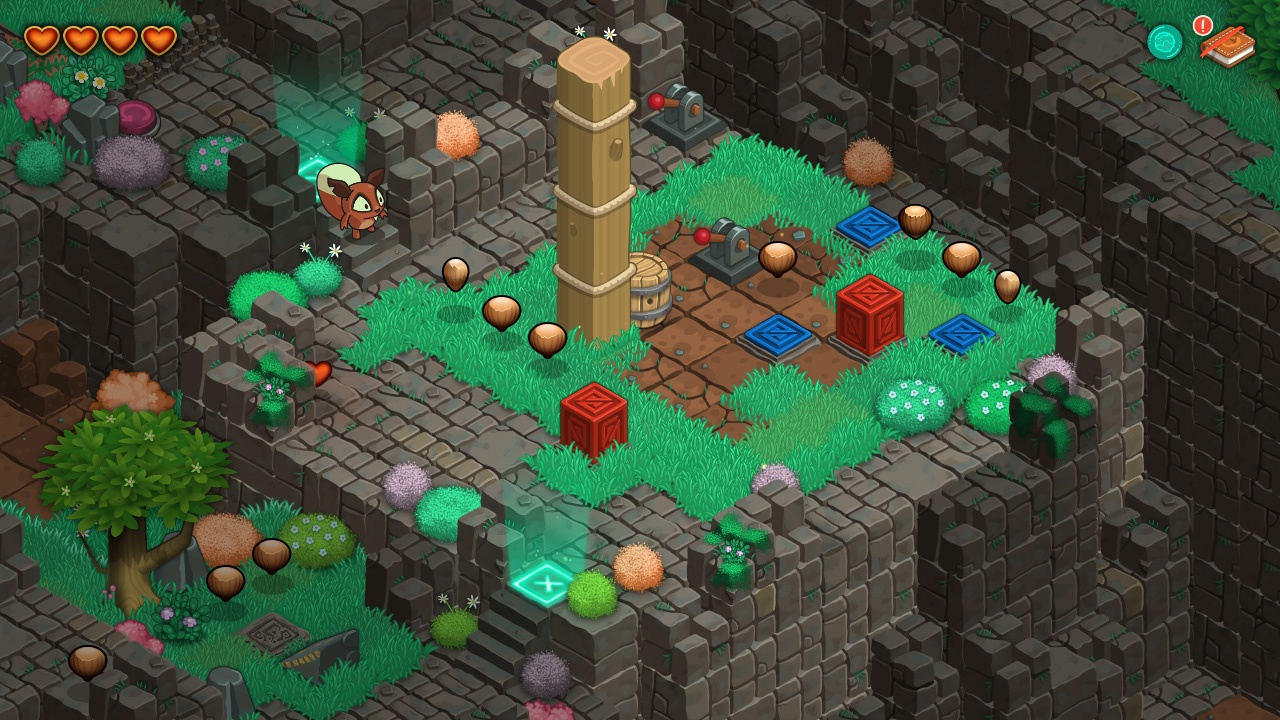 I personally didn’t find the game to be too challenging or too easy, not did I run into any difficulty spikes–which is rare. This is due in part to another great aspect of these puzzles: a subtle hint system that serves as the game’s collection mechanic as well. Nuts, one of the main reasons Red is out of his tree home in the first place, are littered throughout rooms. Picking them up by rolling over them adds them to your inventory and counts towards the area total, but it also nudges you in the right direction by showing you the path you need to take. If you mess up, simply press B and Red will return to the most recent check point, whether than means the beginning of the room or on the most recently triggered save tile.

There are a number of different tile types that have different effects when Red interacts with them, such as ramps which lift him and tiles that will rise after he’s passed over them. Utilizing these tiles opens up different pathways. There are also levers and switches to activate, both of which are pretty standard to puzzle solving. Veterans won’t be lost here and any newbies who need assistance will find a helpful guide in the form of the journal in the upper right portion of the screen, which displays helpful tutorials, complete with images, as well as the map and Red’s inventory.

You have the option of using the JoyCons or the touch screen, though I think the former is a lot more precise. I know those who went from the mobile version to the console version will appreciate that option. 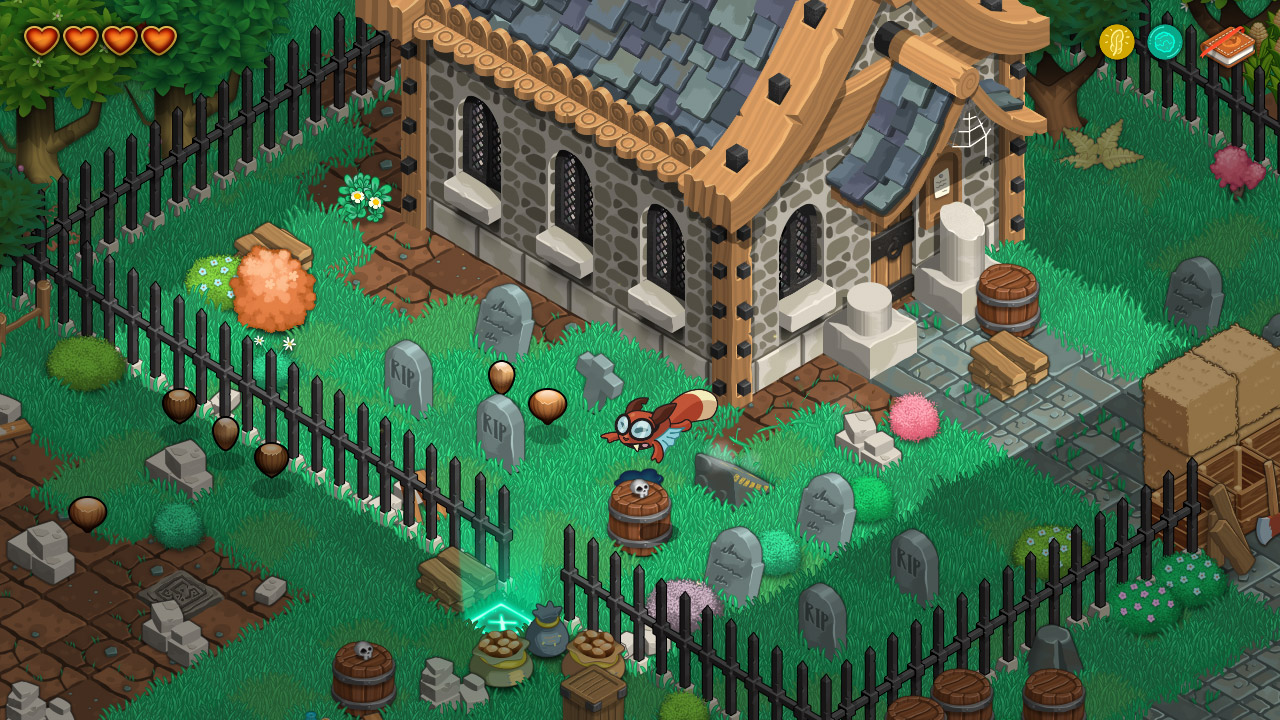 The graphics are bright and cartoony, suited for an animated film. The animations are smooth and the cutscenes, which are not voiced, are expressive enough to convey everything you need to know. The story is surprisingly cute and the character interactions, like with animated films, are rife with double entendres that older players will appreciate.

There’s a lot to like here. If you’re a fan of puzzle games, Red’s Kingdom will make you think without leaving you feeling hopelessly confused. It perfectly utilizes a hint system that doubles as a collectables. It’s a great combo and it works extremely well in guiding the player without forcing them to take a particular path in a world that’s worth exploring. On the RPG side of things, combat while simple, is fun and timing your button taps is rewarding.

Hide your nuts, hide your pappy! This puzzling RPG takes you up against the might of a tyrant king.